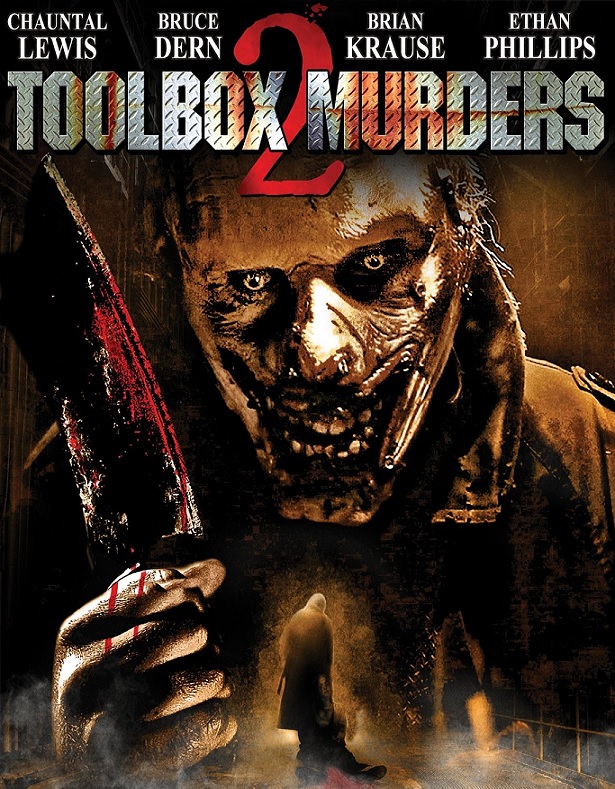 Tobe Hooper directed what is likely to be his last good horror movie back in 2004, remaking 1978’s The Toolbox Murders as, simply, Toolbox Murders. Starring Angela Bettis, the film turned the 70s ‘video nasty’ into an 80s-style slasher flick, giving rise to a hideously deformed monster who was dubbed ‘Coffin Baby’ in the end credits. Eleven years later, Coffin Baby has returned.

Directed by Dean Jones, Toolbox Murders 2 centers on Samantha Forester, a young woman who is kidnapped by Coffin Baby in the wake of her sister being brutally murdered. Locked up in the deep, dark bowels of the Lusman Arms Hotel, Samantha is repeatedly tormented and tortured by the sinister monster, who brings in a host of other victims and slaughters them right in front of her eyes.

The behind the scenes story of Toolbox Murders 2 is a fascinating one, as the film was originally shot back in 2011. After a poorly received festival screening, Dean Jones shot additional footage behind the studio’s back, and in 2013 he independently released a new cut of the film under the title Coffin Baby – which he claimed, despite the villain’s name being in the title, had no relation to the Toolbox Murders franchise.

Due to Jones essentially going rogue, the franchise had been caught up in legal limbo for many years, with Coffin Baby receiving an overseas release while the real sequel sat on a shelf somewhere. Now, courtesy of Scream Factory, Toolbox Murders 2 has finally been rolled out on home video, at long last allowing us all to experience the originally intended follow-up to Tobe Hooper’s 2004 remake.

Unfortunately, the wait was anything but worth it. An amateur effort on every single level, Toolbox Murders 2 is easily the very worst horror film that has thus far been released in 2015, and I say that as genuine opinion rather than embellished hyperbole. If you thought Texas Chainsaw Massacre: The Next Generation took a dump on Tobe Hooper’s filmmaking legacy, you truly ain’t seen nothing yet.

It’s honestly hard to even call Toolbox Murders 2 a movie, as I’m pretty sure a movie needs an actual plot in order to be considered one. Running 85-minutes long, Coffin Baby’s return is a chore to sit through for the entire duration, and the “story” – which has no discernible beginning or end – amounts to little more than a Guinea Pig-inspired parade of mindless gore and shoddy makeup effects.

Nearly the entire movie takes place in Coffin Baby’s dungeon, and Jones separates the various cruel acts with nauseating title cards that note the passage of time. This literally goes on for the duration, with random characters brought in every so often and immediately killed off. We’re also treated to a couple of flashback sequences, the events of which completely contradict one another. Because why not?

You’d almost have to put forth effort to make a film as inept as this one, as it’s the sort of movie that’s devoid of a single ounce of talent – either behind or in front of the camera. The camerawork is often confoundingly bad, making you question how Jones ever landed the gig – some scenes even appear to have been shot on a cell phone. Everything else is equally amateur, from the score to the acting.

As main character Samantha, Chauntal Lewis is as unfit to be in front of the camera as Jones is to be behind it, turning in one of the most insufferable performances since Tommy Wiseau in The Room. Whether she’s tasked with playing scared or crazed, Lewis is off the mark to the point of being laughable, which is kind of a major problem given how often she’s the only one on screen.

Baffling choices are the name of the game in Toolbox Murders 2, but perhaps the oddest is that Bruce Dern pops up for a brief cameo of sorts – yes, the same Bruce Dern who was nominated for an Academy Award last year. Dern appears to be playing the old man from the remake but has a different name, and I will likely spend the rest of my days pondering what the hell he was doing in the movie.

There’s one point where Coffin Baby tortures Samantha by wheeling a TV set in front of her cell and making her watch a grainy film, and upon close inspection you might recognize the footage as the opening credits from this very movie. Yes, the villain in Toolbox Murders 2 tortures his victim by forcing her to watch Toolbox Murders 2, which pretty well sums up the experience of this truly awful sequel.

If there’s a redeeming quality in this one, I sure as hell didn’t spot it.