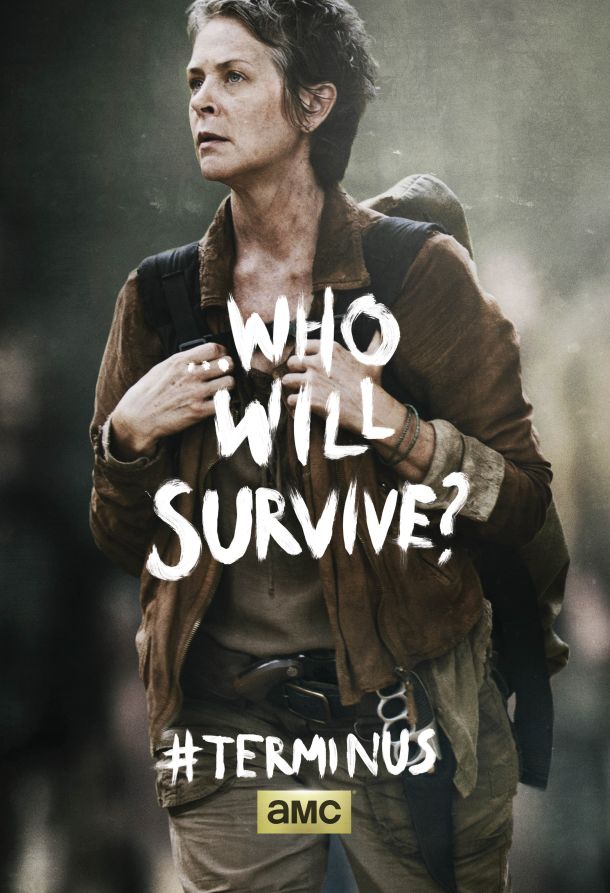 I think it’s pretty safe to say that no one in their right mind – save for the characters on the show – thinks that The Walking Dead’s Terminus is truly the safe haven that it’s marketed as.

We got our first glimpse of the so-called sanctuary at the tail end of last night’s episode, with the reunited Maggie and Glenn joining forces with Abraham, Sasha, Bob, Tara, Eugene and Rosita, and finally arriving at the destination they’ve all been walking toward since the Governor blew the prison to pieces.

At first glance, Terminus is indeed the friendly place that the signs promoted it as being, looking very much like a mini-version of Woodbury. Beautiful flowers are growing on the premises and the group was greeted by a friendly-looking woman (played by Pet Sematary’s Denise Crosby!), who immediately offered them a plate of food, which she was cooking up on a barbecue.

But is there something sinister lurking beneath the surface, like there was at Woodbury? This being The Walking Dead and all, I’m inclined to believe that sanctuary is far from the proper word to describe what Terminus has to offer.

I must admit that I’ve yet to read a single page of the Walking Dead graphic novels, and though I’ve been told that the Terminus storyline was created for the show, I’ve nevertheless been holding off on making any predictions as to what Terminus is going to turn out to be. Quite frankly, I feel that I’m just not qualified to make such predictions, given the fact that I know the show plays on ideas from the comics, even when they take an indirect approach of doing so.

Simply put, I can’t help but feel that avid readers are far more capable of predicting future events on the show than someone like myself, but after the final moments of last night’s episode, I feel pretty damn comfortable in saying that I have a pretty good idea of where the show is headed, come Season 5. And if you’re asking me, zombies soon won’t be the only ones who are going to have our beloved survivors on their dinner menus.

What immediately struck me as being odd about Terminus were two things; 1) The fact that Glenn and friends were so easily able to enter the premises, and that nobody stood guard over the gate – nor was it locked; and 2) The fact that not a single person could be seen aside from Mary, despite the fact that countless other survivors surely must’ve seen the signs, and traveled to Terminus. It’s supposedly a sanctuary for all who arrive, and yet only person seems to be there? Yea. That’s pretty damn fishy.

Perhaps the most telling clue of all is the fact that Mary was seen cooking what must’ve been meat on the barbecue, which certainly could be the carcass of a dead animal, though I’m more inclined to believe that the meat belonged to one of the many humans who arrived at Terminus (Beth, perhaps?). “Let’s get you settled and we’ll make you a plate,” said Mary, a statement that has two very different meanings, depending on how you choose to look at it. And I’m choosing the more horrifying one.

It totally makes sense that cannibalism would be the chosen life path of certain survivors in the zombie apocalypse, given the fact that it’s not exactly easy to live off of animals and found food. And if you were indeed a cannibal, would you not come up with a clever way to lure your meals into your den, by falsely offering up safety? If you think about it, even the best of people – like Rick and the gang – are wary of other survivors, so why would anyone in their right mind lead others to their sanctuary, and not even have security measures in place to make sure the people entering pose no threats to their well-being?

It just doesn’t add up, and the cannibal explanation is the only one that really makes sense. If it’s a trap, as it simply has to be, then I can think of no other reason why people would be lured there, aside from the folks inside wanting to eat them. So if you’re asking me, Terminus either truly is a safe haven or it’s a cannibal-infested death trap, and I’d quite frankly be shocked if it turned out to be the former.

Obviously, the cannibal theory is a common one that’s circulating around the internet, but I’m really just looking to get some discussion going, and see what everyone else is predicting for next week’s season finale / the future of the show. So drop a comment below and let us know what you think Terminus is all about. Also, feel free to predict which major character(s) will not survive the season, because we can be pretty damn sure that at least one will fall!