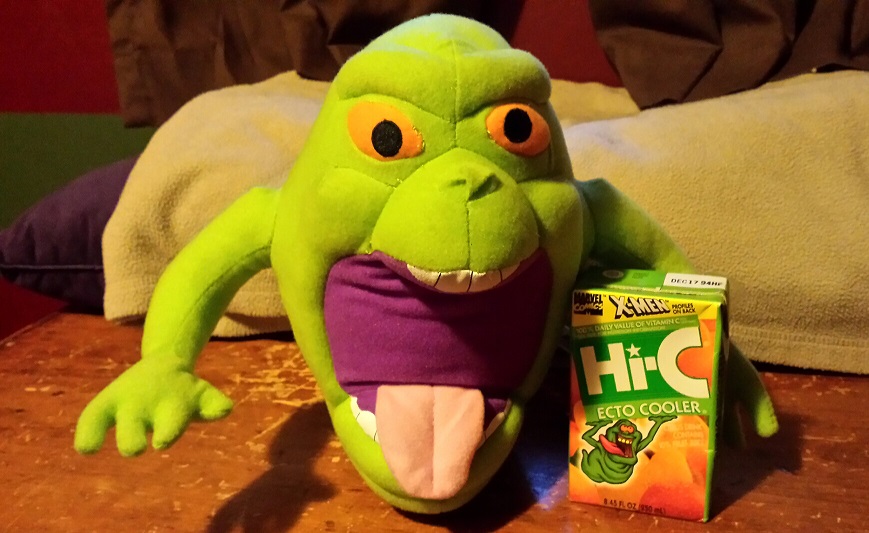 This year marks the 30th anniversary of Ghostbusters, a classic film that has spawned all sorts of spin-offs and product tie-ins over the years. To list them all off would require more words than anyone in their right mind would care to read, so let’s skip ahead to the one that matters most…

Originally birthed into the world in 1987, as a tie-in with the animated series The Real Ghostbusters, Hi-C’s Ecto Cooler was essentially liquid Slimer, a green-colored and yet orange/tangerine-flavored beverage that was housed inside of both juice boxes as well as larger-sized cans.

Described on the packaging as a ‘citrus drink,’ Ecto Cooler contained 10% fruit juice and each 8.45 fluid ounce juice box was packed with 100% of a child’s daily Vitamin C needs. Water, various unhealthy sweeteners, concentrated juices and Malic as well as Ascorbic acids filled out the ingredients list, those elements coming together to form the most iconic beverage that pop culture has ever known.

It was the Coca-Cola Company’s Minute Maid division that was responsible for both regular Hi-C and the flavor of Hi-C that is most fondly remembered by anyone and everyone with good taste, and I’m willing to bet there’s not a single person on this planet who consumed Ecto Cooler in their youth that doesn’t to this day vividly remember the taste and smell – and want to experience both of those things at least one more time, before they shuffle off this mortal coil.

Phew. That was a long sentence.

Though Ecto Cooler lasted much longer than the animated series that was responsible for spawning it, it’s been off the shelves for well over a decade now, officially being discontinued in 2001. Legend suggests that Minute Maid continued producing the beverage under different names for the subsequent six years, though even those drinks have since been put back into the containment unit.

The death of Ecto Cooler hasn’t stopped fans from trying to bring it back to life, and many have done so by attempting to MacGyver their own concoctions, with varying results. The website Ghostbusters: Chicago Division came up with perhaps the most noteworthy recipe, mixing together orange juice, lemonade, Kool-Aid, food dye and a whole lot of sugar in an attempt to remind themselves of that sweet taste Ecto Cooler brought to their lips, far too many years ago.

As for the real Ecto Cooler, many fans have held onto both empty and sealed boxes and cans all these years, including myself (thanks Matt!), and those relics from the past pop up from time to time over on eBay, where they of course sell for a whole lot more than they did when Minute Maid was still producing the beverage. Like, you’d have to sell your house to win one. 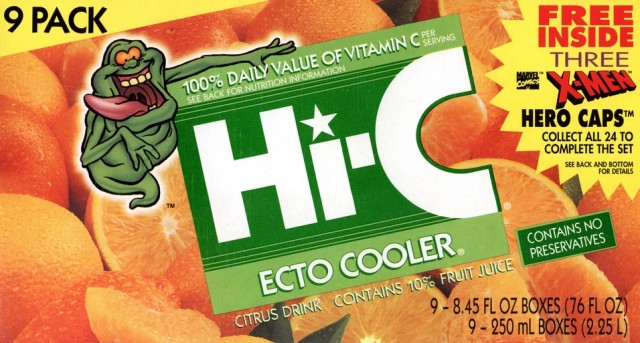 For the most part, however, all you’ll find on eBay are things like magnets and vintage advertisements. A search for ‘Ecto Cooler’ has recently begun to yield a results list packed with E-Cigarette vapors, designed to taste like the Ghostbusters drink. Yes, people are now smoking Ecto Cooler. Just goes to show how hungry nostalgic fans are for one more taste of the beverage they so fondly remember.

And that about brings us up to speed to the present day, and Ghostbusters‘ 30th anniversary. With the film being re-released into theaters, new Blu-rays hitting store shelves and Ghostbusters mania once again sweeping the nation (donuts! LEGOs!), it seemed a no-brainer that Coca-Cola would bring Slimer back for one more dose of fun in the sun. But alas, as 2014 nears closer to its end, with no sign of Ecto Cooler in sight, our collective hope for a return is quickly dwindling.

It’s quite surprising, actually, that Ecto Cooler hasn’t already been brought back – either this year or in the recent past. Nostalgia is hotter than ever right now, and with Coca-Cola bringing Surge back just last month, it seems that they’re pretty well aware of the fan interest in old products. There’s no food or beverage product from the past that fans are craving more than Ecto Cooler, so you can’t help but wonder if they’re holding off, or their fingers just aren’t on the pulse of this one.

Thankfully, enthusiastic fans have once again stepped in, in an attempt to bring Ecto Cooler out of containment. Hopeful that the voices of Ecto Cooler’s rabid fanbase will ensure that Coca-Cola hears that pulse loud and clear and puts their finger directly on it, a New York-based fan by the name of Dan Milano recently started the ‘Resurrect Ecto Cooler’ campaign, using the website Change.org to start a petition to help accomplish just that.

“If childhood had a flavor, this would be it for millions of ’80s babies,” reads the headline on the campaign’s Facebook page, hitting the nail on the head of why it is that so many of us want the drink back. Because it’s not just a drink; it’s goddamn childhood in a goddamn juice box.

But here’s the thing. If enough fans rally behind the cause, and DEMAND that they want Ecto Cooler back on store shelves, it’s inevitable that Coca-Cola will at least take note. And who knows. They just might listen. Big companies are of course driven by money, and if they realize how much money they can make off of our nostalgia, I can be pretty damn sure that they’ll find it pretty damn irresistible to take advantage.

If Ecto Cooler comes back, it’s as much a win for their wallets as it is for our nostalgia. So sign the petition, follow the campaign on Facebook and spread the word. Our support can only help the cause, and it only takes a few seconds to add your digital Hancock to the list.

With any luck, we’ll someday soon be sticking that orange straw through that all-too-small, foil-covered hole, and sucking our childhoods straight back into our souls. I can already taste it. Can you?

I leave you with Ecto Cooler connoisseur Dinosaur Dracula‘s hilarious video from two years ago, wherein he consumes an actual Ecto Cooler juice box… from 1994. Enjoy.

Now… who wants to start a petition to bring Rick Moranis back?