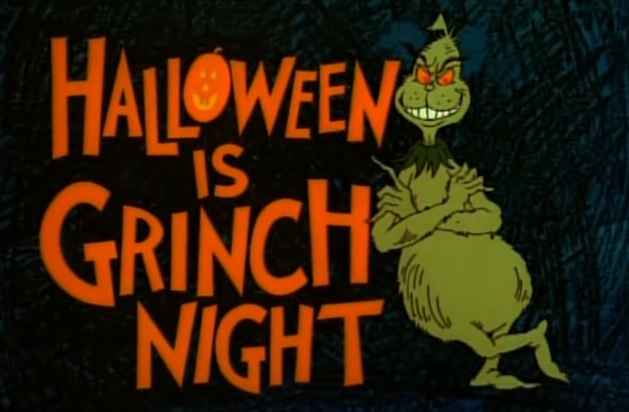 There are a few traditions that are an essential part of my annual Halloween experience, which include drinking enough pumpkin beer to turn part-gourd and, of course, carving at least one terrible looking jack o’lantern that just begs to be smashed on my porch by trick or treaters who don’t appreciate the finer things in life, like really bad art.

Right up there with those two things is watching my favorite Halloween TV specials, with the ones that came courtesy of Roseanne and Home Improvement ranking amongst my personal favorites. Over the years, MANY shows have had Halloween specials of their own, and I thought it might be fun to revisit some of them together here on HL, as we head toward the big day.

As far as popular culture is concerned, there are few bad guys more iconic than the Grinch, a Dr. Seuss creation who has come to life in the form of a children’s book, an animated special, a live-action movie and a Broadway musical. With his termite smile and trademark green fur, the Grinch is essentially a kid-friendly Krampus – the anti-Claus who wants nothing more than to spoil the joy of the holiday season.

Introduced in 1957 and brought to life in 1966’s animated special (where he was voiced by horror icon Boris Karloff!), the Grinch is of course most known for stealing Christmas, a holiday that he’s become as synonymous with as Santa Claus, tiny toy-making elves, Clark Griswold and the disappointment I felt when I didn’t get every tiny little thing I wanted on Christmas morning of 1989.

But there’s a noteworthy part of the Grinch’s history that time has largely forgotten. And though red and green are the colors he’s most often paired with, one mustn’t forget that he also tangled with orange and black. Yes, the Grinch and his slave dog Max once upon a time starred in their very own Halloween special, airing on October 29th of 1977.

The first Dr. Seuss special to air on ABC, Halloween is Grinch Night served as an 11-years-later prequel to the How the Grinch Stole Christmas! animated special, and in it the Grinch once again set his sights on ruining the holidays for all the Whos down in Whoville.

Though the word Halloween is never mentioned in the special – which is probably why it was re-titled Grinch Night on home video – it’s immediately clear that ‘Grinch Night’ is the term used in place of Halloween, in Whoville. On this night, a sour/sweet wind marks the impending arrival of the Grinch, who comes down from his mountaintop abode to wreak havoc on the otherwise peaceful Whoville. 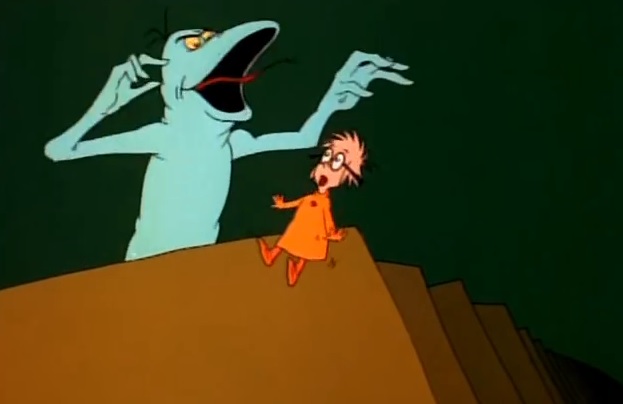 An obvious attempt to capitalize on the massive success of the Grinch’s Christmas special, his Halloween special also featured a giant carriage that Max is forced to pull up a steep hill, with the sleigh this time around being replaced with what’s referred to as the ‘paraphernalia wagon.’

Rather than being full of stolen presents, the paraphernalia wagon is essentially a Pandora’s Box of evil shit, loaded with monstrous entities (including angry molesting trees and a living Swastika) that the Grinch aims on unleashing into Whoville – either that or it’s full of drugs that make one think one is surrounded by monsters… depends on how you look at it.

After being swept up in the harsh Autumn winds on a trip to the outhouse, it’s up to young Jew-Who Euchariah to save the day, and prevent the Grinch from carrying out his sinister plan.

Does the Grinch’s small heart grow three sizes on Grinch Night, as it did on Christmas? Does Euchariah save Whoville, before it’s too late? You’ll have to watch this trippy and oftentimes nightmarish animated special to find out, which is absolutely perfect for those who love Tim Burton movies… and prefer to watch them on drugs.

Check out Halloween is Grinch Night below, a forgotten piece of history that’s just begging to be rediscovered. If you’re not in the Halloween spirit after these 26 minutes are up, then I’m afraid there’s just no hope for you!