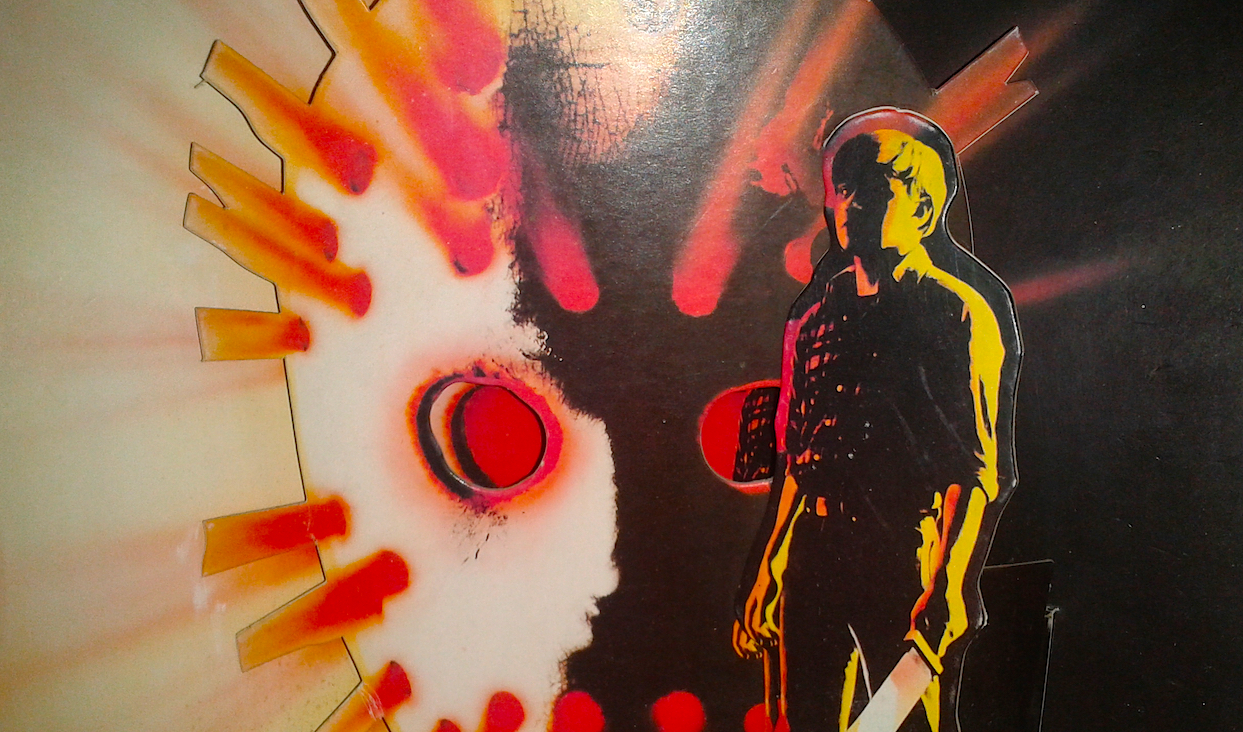 Something very unusual happened to me about 2 weeks ago. I paid the bills, made sure the kids had everything they needed, did the grocery shopping, and when I finished for the day and looked in my wallet there was a little bit of money left over!

After regaining consciousness and picking myself up off the kitchen floor I headed over to ebay, determined to buy myself something COOL for the first time in about twelve months. Of course the usual thing happened at first. When I have no money I see TONS of stuff I wish I could afford, and when I do have a little extra to spend I see nothing. I’m pretty sure it’s a weird cosmic or psychological thing, but page after page went by without temptation coming my way. Then, just as I was about to reel in my itchy trigger finger and give up I finally spotted something awesome … something that pushed my nostalgia button in a big way. I had to have it!! 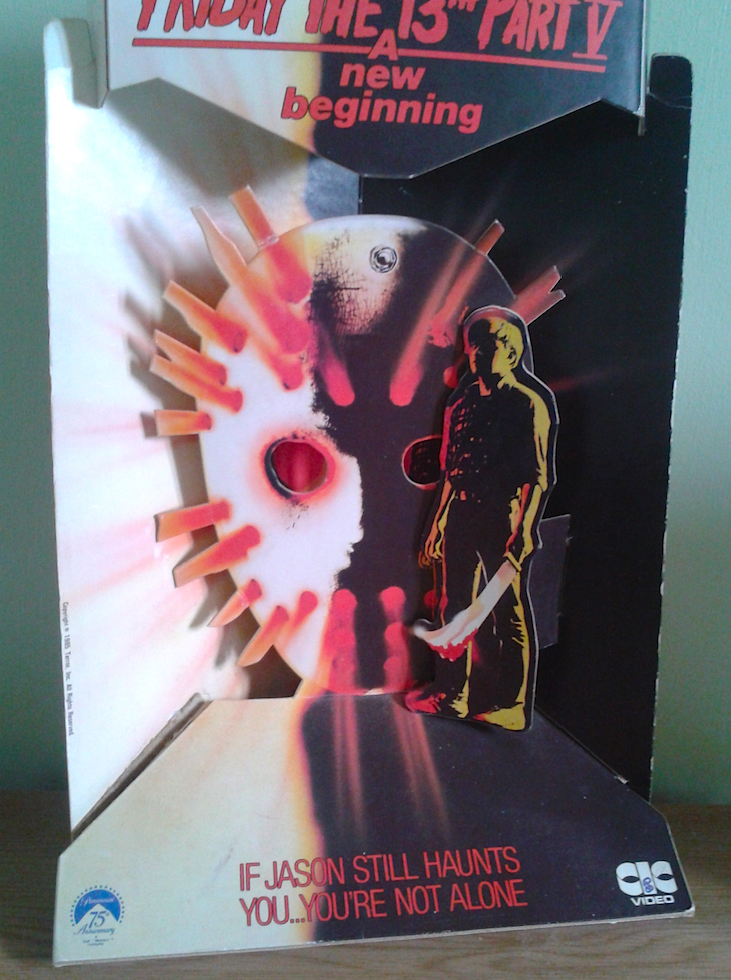 The item in question was a VHS store cardboard display (Standee?), for Friday The 13th Part 5: A New Beginning. You know, those things they would have propped up next to the till, advertising the latest ‘hot’ movies back in the day. It looked slightly faded, and had some minor damage but fuck me, it was awesome, and considering how fragile these things are it had aged very well.

I also felt there was some kind of mystical destiny at work while I gazed longingly at the screen that night. I had been thinking about writing an article for the significant anniversary of A New Beginning for some time and THIS was the ebay gods telling me to do it … AND spend some money! Who was I to argue with destiny?

I waited, won it (for a very reasonable price), and a few days later it was in my arms, being cradled like a baby.

I’m a child of the VHS era, and some of my most vivid memories from the distant past involve the sheer excitement I would feel every time my dad drove us to the rental store to get a Saturday evening movie. When I see items like this I always want to protect them and keep them safe, it’s in my DNA. Without these times I wouldn’t have developed my passion for movies, horror, art, posters and more … I LOVE this slightly tatty standee, and I’ll be forever glad I had a little extra cash to buy it. 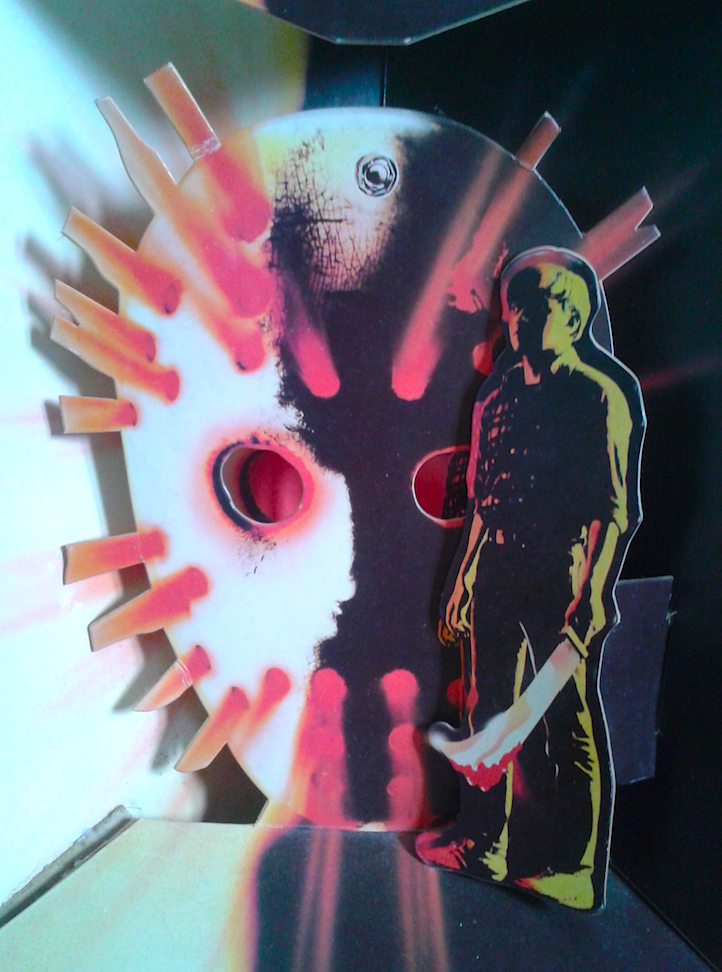 SO, what about the movie itself, which celebrates its 30th anniversary this year.

Well (clears throat), I’ll be honest, in my younger days I didn’t care for it. The obvious reason being that apart from a few quick dream sequences, my main man Jason isn’t involved. I thought there was far too much humour, and I just couldn’t muster the energy to watch it very often. Parts 1-4 were so precious to me back then that A New Beginning almost pissed me off because it had the nerve to try something different. How dare they move forward without Jason!!

As an adult my opinion of the movie has changed significantly. I’m able to look beyond the fact it didn’t deliver what my younger self was expecting, and what I now see is a Friday The 13th movie that really entertains. Packed with crazy characters doing crazy things and just begging to be introduced to the end of a machete. The stereotypes are endless, with hillbillies, greasers, horny teens and many more being represented in the most basic and expected ways. At times it comes close to being a parody, but director Danny Steinmann maintains a reasonable balance and makes sure the satisfying kills flow thick and fast.

Corey Feldman was busy searching for hidden treasure with the Goonies, so he could only appear briefly at the start of the movie in a scene that was basically a spooky preview of what would happen at the start of Jason Lives a year later. Because of this the writers decided to zoom forward in time by several years and we catch up with heroic Tommy Jarvis as a troubled teenager, on his way to being dropped off at Pinehurst Youth Development Center. An utterly useless and worryingly isolated halfway house for messed up young folks.

The facility is run by a Dr. Matthew Letter (AKA – the guy who gave Indiana Jones his hat at the start of The Last Crusade), and is just overflowing with potential victims. Tommy barely has time to unpack his collection of rubber masks and knifes before the killing starts, but when chubby simpleton Joey is chopped up like a piece of wood it isn’t because he bumped into Jason during a late night stroll, no, poor Joey simply offered a candy bar to an angry young man named Vic. I guess Vic wasn’t hungry, or REALLY hates candy because he does far more damage than Jason ever would, leaving Joey a dismembered mess.

This random act of violence is ultimately revealed to be the catalyst for everything that happens throughout the rest of movie, and what follows IS everything you would expect from a Friday The 13th film. Even the killer looks and acts like Jason … Watching it now just makes me wonder what the hell was I so twisted up about as a kid??

I didn’t fall in love with this franchise just because of Jason, I fell in love with it because I love horror and I love being entertained. Jason has enjoyed more than his fair share of screen time over the years, and while it certainly wasn’t a ‘New Beginning’ for the series, it remains a very enjoyable detour.