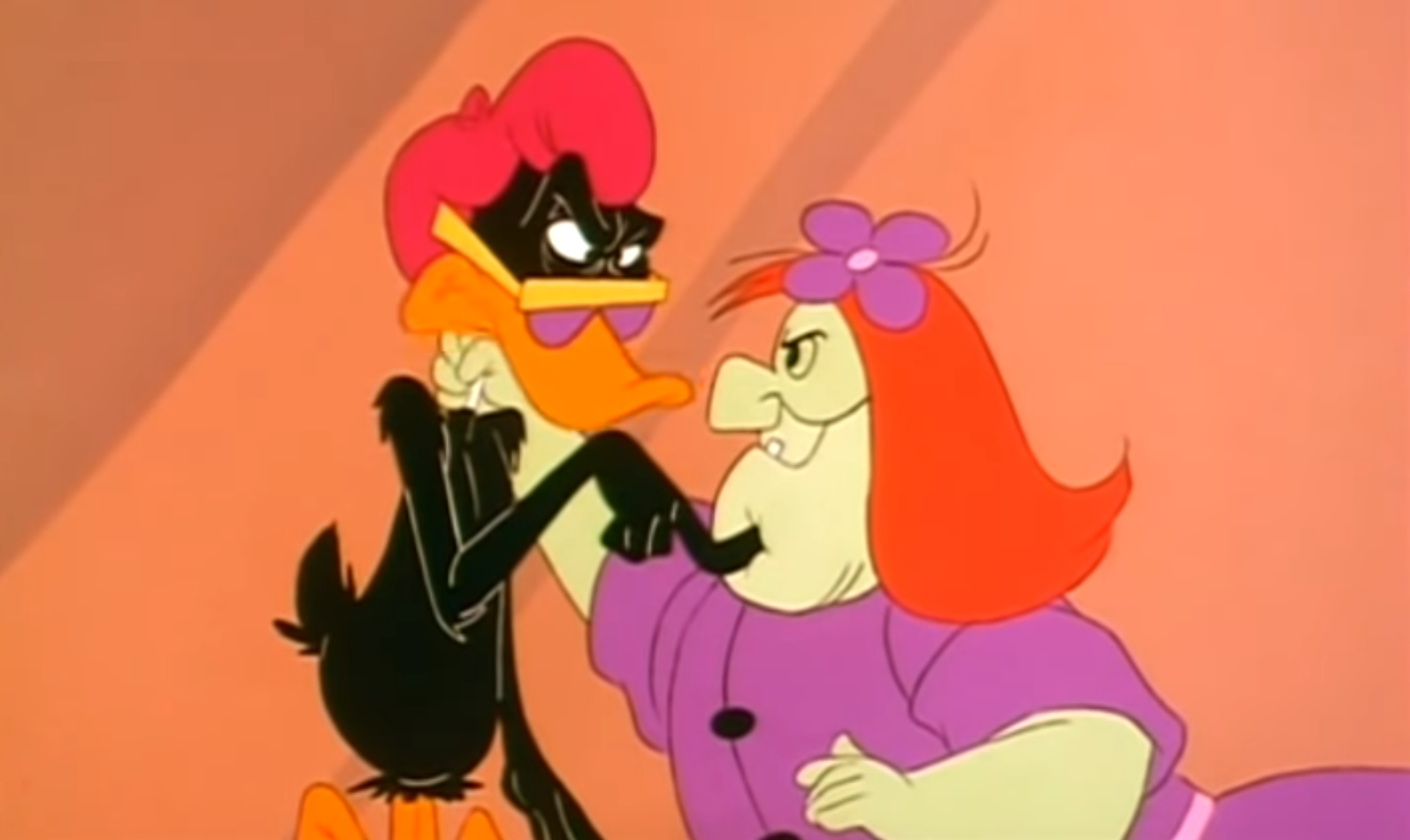 If you were a ’70s kid raised on Saturday morning cartoons, Daffy Duck and Porky Pig Meet the Groovie Goolies (1972) might seem like a fever dream you once had years ago and then buried deep within your subconscious. Was there really a made-for-TV movie combining the beloved Looney Tunes characters with the monstrous, but cheaply animated residents of Horrible Hall? Yes, there was, and it aired on December 16, 1972 as part of “The ABC Saturday Superstar Movie.”

Daffy and the gang, I’m sure you know well from dozens of cartoons, specials, commercials, TV series, and feature films like Space Jam (1996). But The Groovie Goolies might need a little bit of an introduction. This Filmation animated series originally ran on CBS from 1970 to 1972. The setting is Horrible Hall, a castle-like boarding house for monsters, including several inspired by the Universal horror films of the ’30s and ’40s. Regulars include the curmudgeonly Dracula, the childlike Frankie, the wisecracking Mummy, the excitable Wolfie, and a scatterbrained witch named Hagatha.

Filmation was supposedly inspired to create The Groovie Goolies due to the continued popularity of monster movies on television. But the series’ true progenitor was Filmation’s very successful The Archie Show (1968-69), which combined corny jokes, limited animation, a gaudy color palette, and plenty of bubblegum pop music into a genuine hit with crossover appeal to kids and adolescents. The Groovie Goolies plays like a horror-themed version of The Archie Show, crossed with a bit of Rowan & Martin’s Laugh-In, which likewise employed a rapid-fire editing style with quick cutaways and blackout sketches. Amazingly, Goolies even recaptured a bit of The Archie Show‘s real-world success on the pop charts. Under the stage name Daddy Dewdrop, songwriter Dick Monda took a song from the show, “Chick-A-Boom,” into the Top 40.

While the writing on The Groovie Goolies is extremely corny and juvenile (with some of the dialogue coming directly from joke books and Popsicle sticks) and the animation is repetitive to say the least, the show nevertheless features an able voice cast. As Dracula, F-Troop star Larry Storch uses the exact same Frank Morgan impression he used as Phineas J. Whoopee on Tennessee Tuxedo and His Tales (1963-66). It makes no sense for this character, but it’s nice to hear anyway. Meanwhile, Howard Morris (maybe best known as Ernest T. Bass on The Andy Griffith Show) voices a wide variety of characters. For Frankie, he naturally uses a Boris Karloff voice. His Mummy sounds like Keenan Wynn as the Mad Hatter in Disney’s Alice in Wonderland (1951). Wolfie is an excitable, slang-slinging hippie character, prone to howling at the end of nearly every sentence. Best of all, Morris plays Hagatha as a saucy old broad in the tradition of Jonathan Winters’ “Maude Frickert” character.

In 1972, Filmation somehow wrangled permission to use a number of classic Warner Bros. characters for an hour-long crossover special on ABC. Better yet, they got Mel Blanc himself to voice most of the Looney Tunes stars. The one major absentee is Bugs Bunny. Apparently, Warner Bros. was not going to let the studio’s most famous character appear in this off-brand production. But Daffy, Porky, Elmer Fudd, Sylvester, Tweety, Pepe Le Pew, Foghorn Leghorn, Yosemite Sam, and a mute Wile E. Coyote are all here.

This film is not one of Mel Blanc’s proudest moments as an actor. Judging from his line readings, he was obviously not enthusiastic about this project, and he is ill-served by Filmation’s sloppy audio editing. Daffy’s voice is pitched too high, making it sound as though the duck has been inhaling helium. And poor Porky seems to have suffered a mild stroke, as his voice is not pitched up at all. Petunia Pig, rarely seen in animation back then, is huskily voiced by Jay Scheimer (aka “Joanne Louise”), wife of Filmation head Lou Scheimer. I had no preconceived notion of how Petunia Pig should talk, but I never would have imagined her as a chain-smoking receptionist, which is what she sounds like here. There is further cognitive dissonance in hearing the antics of Porky, Daffy, et al. underscored with a loud, chortling laugh track. Such sweetening was never necessary in their classic Warner Bros. shorts.

The plot of Daffy Duck and Porky Pig Meet the Groovie Goolies is either extremely complex or totally nonexistent. I couldn’t tell which. In Hollywood, Daffy Duck is producing, directing, and starring in a film called King Arthur and the Knights of the Round Table, costarring all of the other Looney Tunes characters. Unfortunately, the production is being sabotaged by the jealous, embittered Phantom of the Flickers (voiced by Storch and modeled after Lon Chaney in London After Midnight), who threatens to destroy not only this film but all of Daffy’s previous adventures. After the Phantom interrupts one of Daffy’s televised interviews, superfan Frankie recruits his hideous housemates in a rescue mission. When the Goolies arrive at the movie studio (actually called Daffy Duck Studios), Daffy assumes they are stuntpeople and puts them to work in King Arthur. All the while, the Phantom does what he can to halt the production, eventually stealing reels of film and leading all the other characters on a wild goose chase through the studio and beyond.

In keeping with the random, fast-paced Laugh-In template, Daffy Duck and Porky Pig Meet the Groovie Goolies is mostly a jumble of arbitrary scenes — a collection of madcap sketches barely connected by any overarching plot. Despite the title, the Goolies and the Looney Tunes are kept apart for most of the running time, rarely occupying the same frame. Maybe this was skittishness on the part of Filmation. Maybe it was a dictum from Warner Bros. In a very broad sense, this is a Phantom of the Opera parody, but the special already has so many characters that the Phantom of the Flickers (who should be the central antagonist) has to struggle for screen time. Besides, his attempts to cause chaos on the set aren’t really that noticeable amid the usual slapstick shenanigans of both Groovie Goolies and Looney Tunes. How do you sabotage characters who are constantly sabotaging themselves and each other? My guess is that this superfluous character, who has a seemingly endless collection of rubber masks, was influenced by the success of Scooby Doo, Where Are You? on ABC.

Late in the game, writers Chuck Menville and Len Janson simply have the Phantom steal the negative for King Arthur and take off with it in his guitar case, with the Goolies in hot pursuit. This leads to the single weirdest and most memorable sequence in the entire film. A master of disguise, the Phantom has taken the form of “Hauntleroy,” a boy in a Little Lord Fauntleroy-type outfit. He jumps into another dimension via a mirror, and the monsters follow him. The subsequent chase through “Mad Mirror Land” is shot in live action with human actors, including songwriter Dick Monda, in costume. (Storch and Morris are still doing all the voices.) For these few minutes, the movie resembles nothing so much as an episode of The Monkees. Ultimately, the characters return to the cartoon dimension, the mystery is sorted out, and King Arthur is completed just in time for a (sparsely-attended) awards ceremony.

Daffy Duck and Porky Pig Meet the Groovie Goolies now exists in a sort of pop culture limbo. Though widely bootlegged, it’s never been officially released on VHS or DVD in America. According to animation historian Don Markstein:

“Critics have responded to this unlikely crossover with near-unanimous disdain.“

It’s easy to see this as a career-low for Porky and pals, but it’s also simultaneously a career-high for the Groovie Goolies bunch. Other than some funky ’70s background music (very similar to what Filmation used on Fat Albert and the Cosby Kids) and a lone joke about Elliott Gould, this special has a timeless quality to it. When the characters run onto the sets of other films, we see that Daffy Duck Studios is turning out generic cowboy pictures and swashbuckling adventures that could have been made in the 1930s. This is the kind of place where directors still wear jodhpurs and give orders through megaphones. No traces of “the new Hollywood” here.

Though nearly none of the jokes land and the backgrounds loop around endlessly, the film is not a total disgrace or embarrassment to the Looney Tunes legacy. That’s about as much of an endorsement as I’m willing to give it. The characters basically look and sound the way they should, and the animation isn’t that much of a step down from the shorts Warner Bros. was releasing in the late 1960s, by which time the studio was already outsourcing its animation to other companies. I think, if I had been a kid watching this in 1972, I would have been very excited to see the Goolies and the Looney Tunes together. The special is not really special in any noticeable way, except as an oddity, but it’s basically as harmless as those ads for Bugs Bunny vitamins or, indeed, those latter-day Warner shorts.

Ideally, even though it originally aired a few weeks before Christmas, this could be marketed as a Halloween special and shown every October. The problem is that much of the running time is devoted to scenes from the decidedly unspooky movie-within-a-movie, King Arthur. (Daffy and his cast are supposedly viewing dailies.) It’s almost as if the writers couldn’t decide if they were doing a parody of Phantom of the Opera or a send-up of Arthurian legend, so they decided to alternate between the two. Perhaps, instead of sending the Goolies to Hollywood, it would have been better to have Daffy and Porky visit Horrible Hall instead. Maybe the duck and the pig (with some of their pals) are on a road trip together when their car breaks down and they have to take shelter at the monster boarding house. That may not have resulted in an enduring classic either, but it could have been more fun than what they ended up doing.

A strange postscript: Warner Bros. continued to hold Filmation in very low regard for years after this special. A 1997 Animaniacs episode called “Back in Style” takes a sardonic swipe at the studio’s cost-cutting approach, renaming the company “Phlegmation.” The real Filmation had been defunct for eight years by then.