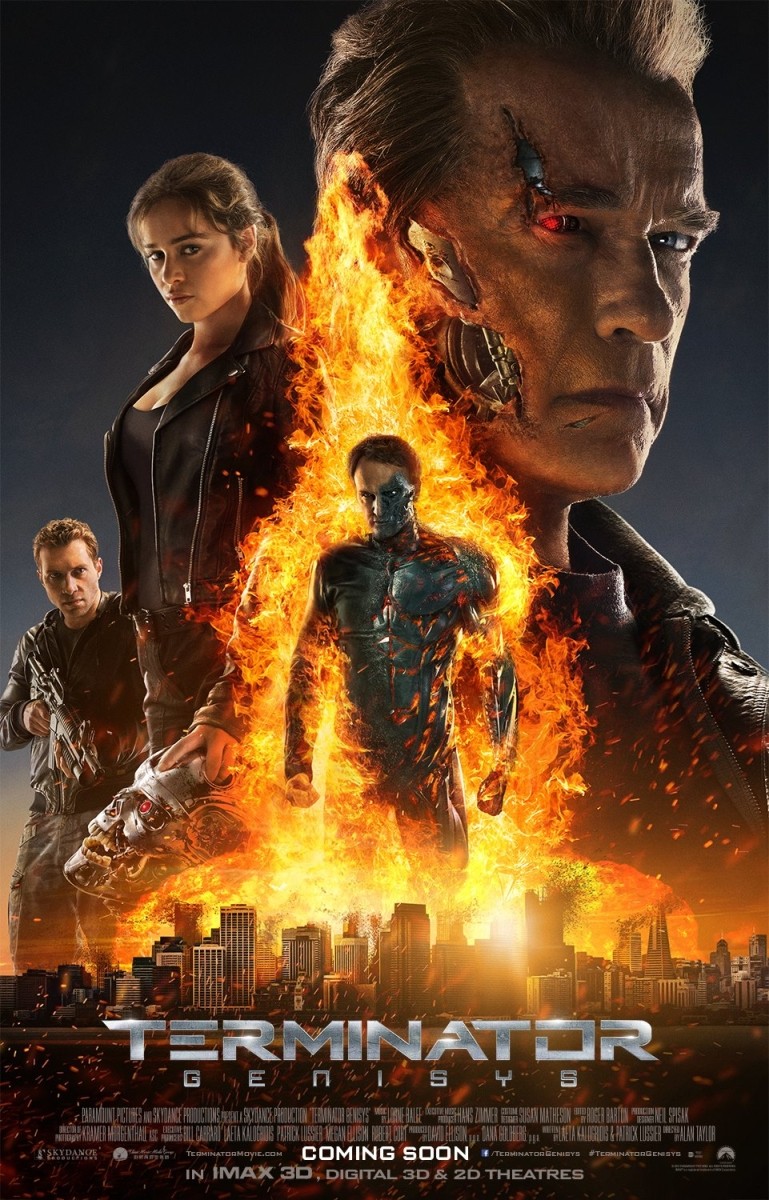 It was 31 years ago that James Cameron introduced the world to The Terminator, centered on an unstoppable cyborg sent from the future to kill Sarah Connor’s unborn son. The slasher movie-inspired time travel film led to a string of sequels, beginning with the action-packed Judgment Day and continuing with Rise of the Machines and Salvation. A brand new trilogy begins this year with Terminator Genisys.

Directed by Alan Taylor, Genisys sees the John Connor of the future sending Kyle Reese back in time to 1984 on a mission to protect his mother, but Reese finds that the events of that year are far different than the ones we all remember. Along with an old-but-not-obsolete T-800, Reese and Sarah Connor set out to destroy a new iteration of Skynet, and this time the machines have found themselves an unlikely ally.

One of the big selling points for Genisys, as promised in the spoiler-heavy trailers, was that the new sequel would essentially retcon the events of the original 1984 film, literally putting us back inside of James Cameron’s classic. And indeed Genisys delivers on that front, kicking off with a whole lot of fan service in the form of a battle between a benevolent T-800 and the evil (fully nude) T-800 we met way back in 1984.

Genisys is without question at its best when it’s recreating and playing around with moments from the original Terminator, as the nostalgia level alone seems to promise that the film is going to be a slice of fan fiction not for today’s audiences, but more for mega fans of the first two Terminator outings. The 80s-set scenes are pretty damn cool, I must admit, and it’s hard not to smile throughout that early portion of the film.

Alas, Genisys peaks in the early going and never manages to be even half as entertaining as it is when it’s appealing to our collective affinity for nostalgia. The smile soon fades and gives way to sheer bewilderment, as the convoluted and muddled plot is so needlessly confusing that it’s incredibly hard to ever get your bearings and figure out what the hell is going on. Worse yet, it’s impossible to care.

Though the Terminator franchise has of course always dealt with time travel, even the series’ worst sequels at least bothered to make sense of the concept. In Genisys, however, nothing is really explained so much as it is tossed up on the screen like an incomplete puzzle, and it seems at many points that the writers are almost begging you to forgive the plot holes because, well, time travel is confusing and stuff.

There’s truly no reason for a summer popcorn movie to be as mind-bogglingly hard to follow as Genisys is, certainly not a film that features Arnold Schwarzenegger as a gray-haired cyborg, but the film’s worst sin is honestly not even that it doesn’t make sense. I’d be willing to forgive Genisys for being a complete mess if it were at least entertaining, though entertainment is simply not something it provides.

Without a single memorable action sequence and so many dialogue-heavy scenes that the two hour film feels like a four hour snooze-fest, Genisys is quite frankly a chore to sit through. And this is the opinion of a fan who forgave the flaws of both Rise of the Machines and Salvation and had a whole lot of fun with both sequels – so when I say that Genisys is criminally boring, you can be sure that I mean it.

As he always is in these movies, Arnold Schwarzenegger is the best part of Genisys, even if the dialogue doesn’t allow him to be nearly as charming as he was in Judgment Day – the action star’s best role to date. The script at least bothers to explain the character’s aged appearance, and there’s a nice side story that connects him to Sarah Connor in a way that calls to mind his relationship with John in T2.

Unfortunately, not everyone is as good as Arnold. Emilia Clarke plays Sarah Connor while Jai Courtney plays Kyle Reese, and both actors often feel miscast in the iconic roles. As for John Connor, who Genisys turns from hero to villain (trailer already spoiled that), he’s played by Jason Clarke, a casting decision that despite the actor’s solid performance feels like the wrong one. It’s just wrong. It’s all wrong.

The world-destroying threat this time around isn’t Skynet but rather Genisys, a smart phone app that is gleefully downloaded by the plugged in masses. It’s a fitting bit of social commentary for today’s society, but the film fails to hammer the criticism home. And again, everything is so goddamn confusing that I found myself forgetting what Kyle, Sarah and the T-800 were even fighting to contain – the stakes are almost nonexistent.

Though I was a fan of both Rise of the Machines and Salvation, the Terminator franchise admittedly lost something special when James Cameron departed it, and Genisys is a shining example of what happens when a good thing falls into the wrong hands. The fourth sequel is far and away the series’ worst installment to date, and it will likely go down in history as one of franchise cinema’s biggest misfires.

For the first time in my life, I’m no longer interested in where the Terminator franchise goes from here. And I’m also not even sure what to make of the continuity anymore, as Genisys took everything I thought I knew and flushed it right down the crapper. Can we just pretend this movie didn’t happen? Pretty please?