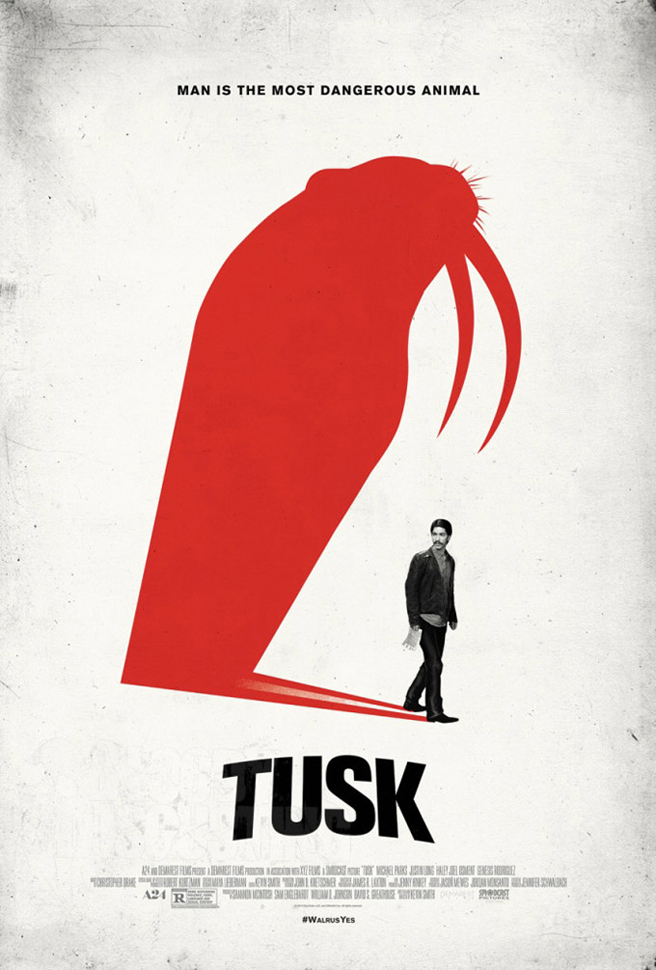 Whether you like Kevin Smith or you hate him, it’s simply impossible to not respect his unconventional career path – particularly in these last couple years.

After bursting onto the scene and building up a massive fan-base with a series of cult classic comedies, the outspoken filmmaker somewhat lost his way in more recent years, being swallowed up by the Hollywood system and finding himself running low on the passion he once had.

Not long after announcing that he was soon going to retire from filmmaking, Smith had what I can only assume was a marijuana-induced epiphany, realizing that he had reached a point in his career where he was, like in the very beginning, free to make the kinds of movies he wanted to make.

Bucking the Hollywood system, Smith essentially became the indie guy once more, vowing to dedicate the rest of his career to doing whatever the fuck he wanted to do. “From now until I drop dead,” he famously stated, “I’m only ever gonna make a flick that only I would/could ever make.”

Ladies and gentlemen, Tusk is that movie.

Holding true to his promise, Tusk is a film that nobody other than Kevin Smith would or could make. And in a cinematic landscape where filmmakers are merely the conduits that deliver studio visions, Tusk is such a breath of fresh air that it’ll make you wish all your favorite filmmakers start being themselves again.

Conceived during a podcast, and inspired by a strange hoax advertisement Smith came across, Tusk is the story of successful podcaster Wallace Bryton (Justin Long), who makes a living interviewing strange characters and relaying the encounters on his internet show. When a trip to Canada to meet a YouTube sensation doesn’t work out as planned, Wallace’s trip leads him to the home of Howard Howe.

Their lives crossing paths due to an advertisement Howe placed in a bar bathroom, Wallace travels to the man’s home under the guise that he’s lonely and just wants someone to tell stories to. But it soon becomes clear that Howe’s intentions are a whole lot more sadistic. In addition to talking, he also wants to turn the young podcaster into… a fucking human/walrus monster thing.

If you’ve seen even a small handful of movies throughout the course of your lifetime, you’ve surely picked up on the fact that there’s a certain way things are done – certain rules and guidelines that filmmakers have to follow. As such, there are certain expectations you have, going into any given movie.

Especially when it comes to horror movies, you’ve probably become pretty adept at predicting upcoming scenes and it’s likely that you oftentimes can map out an entire movie in your head, before you even sit down into the theater to watch it.

Do you know what I’m talking about? Good. Now take all those expectations and throw them right out the goddamn window. Because this is not the sort of movie that plays well with other movies. This is a direct feed from Kevin Smith’s whacky, fully unleashed brain to the screen, and it’s damn sure unlike anything you’ve EVER seen before.

I’d describe it as playing out like a live-action version of the world’s most twisted cartoon, but I’m not even sure that does it justice.

Tusk, quite simply, is the cinematic embodiment of a filmmaker with nothing to lose. Wholly unpredictable from one scene to the next, Smith’s latest suffers from a case of Multiple Personality Disorder in the best possible way, frightening one second, laugh-out-loud funny the next. And when shit really starts to get weird, well, let’s just say I can’t even believe this movie was given a widespread theatrical release.

The star of the show here, aside from some makeup effects work that will likely never leave your mind’s eye, is Michael Parks (Red State), whose performance as Howard Howe is the true joy of the film.

Combining the frightening intensity of The Human Centipede‘s Dr. Heiter, the goofy humor of Christopher Walken and the ‘I’d love to have a drink with this guy’ charm of the fictional ‘Most Interesting Man in the World,’ Parks is at his scenery-chewing best in the role, crafting – just as he did with Red State – one of the most memorable movie villains in recent memory.

In fact, Parks is so good in the role that his performance left me itching for an alternate version of Tusk that was played a bit more straight-faced, as you really get the sense that there was a serious horror movie somewhere beneath the surface of all the blubber. This certainly could’ve been such a movie, if Smith wanted it to be, but what’s ultimately so delightful about it is that it’s not.

Playing the horror more for ridiculously over the top laughs than anything else, Smith has made with Tusk the oddball sort of movie that begs to provide entertainment to stoned horror fans for decades to come. It is certainly not for everyone, to say the very least, but I can’t imagine anyone who it is for not enjoying it for the ballsy exercise in anti-filmmaking that it is.

If there’s any criticism I have of the film it’s that it drags in the latter portions, particularly when a big Hollywood star makes an extended cameo appearance. He’s hilarious in the role, don’t get me wrong, but his scenes should’ve by all means been trimmed down just a wee bit. The movie simply isn’t at its most entertaining whenever Park isn’t on screen.

Then again, any and all criticisms almost become a part of the film’s whacky charm, as the joy of watching the movie is mostly derived from the fact that Smith obviously had a blast making it, and totally went for broke. In a world where most movies are carbon copies of one another, the funnyman’s total lack of regard for playing by the rules is both ballsy and admirable. It’s exciting to see a filmmaker doing what he wants to do, rather than what someone else wants him to do.

For Kevin Smith, Tusk re-ignited his passion for making movies. For you, it just might re-ignite your passion for watching them.