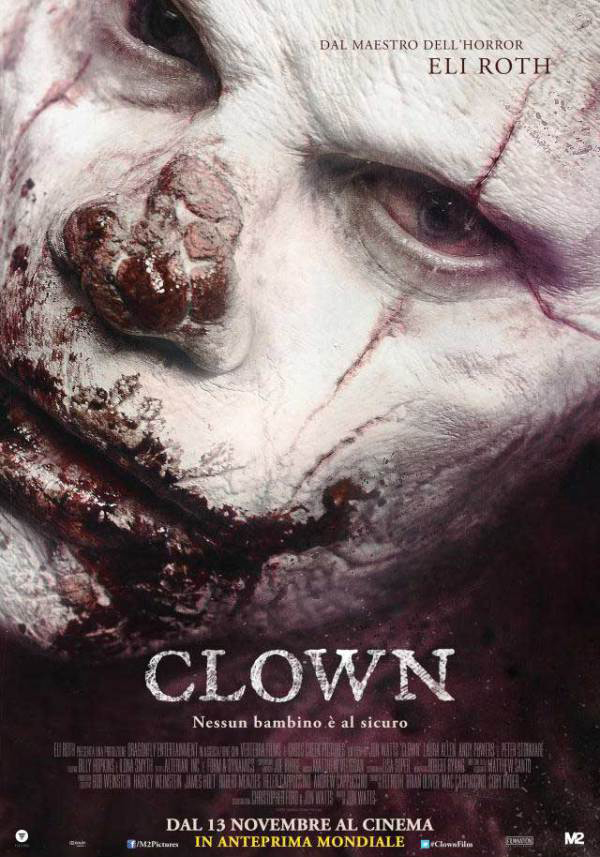 The origin story of Clown is one that showcases the power of the internet, and the way it has afforded fans unprecedented opportunities in the world of filmmaking. To summarize, director Jon Watts made a same-named faux trailer a few years back, which caught the attention of Eli Roth. So in love with the idea was Roth that he helped Watts turn it into a feature, jumping on board as producer.

Co-written and directed by Watts, Clown centers on real estate agent Kent McCoy, who finds himself in a pickle when his young son’s birthday clown doesn’t show up. After finding a clown costume in a house he’s trying to sell, Kent slaps it on and saves the day, though he soon realizes that he can’t take any part of the costume off. Worse yet, he starts developing an insatiable hunger for… children.

It’s no secret that killer clown movies have been done to death over the years, with countless films preying on our collective fear of greasepaint and red noses. With Clown, however, Jon Watts takes that idea in an entirely different and boldly original direction, and it’s the unique concept that is right off the bat a strong suit for the film – it was, after all, the whacky concept that compelled Eli Roth to action.

The Goosebumps-inspired idea of a man trying on a clown suit and literally turning into a clown is, without question, incredibly silly. But the most brilliant thing about Clown is that Watts doesn’t play the concept for laughs, nor does he have any desire to poke fun at the silliness of his idea. Clown, unexpectedly, is executed with a straight face the whole way through, and holy shit does it work.

Watts shows an admirable confidence from start to finish with his debut feature, remaining deeply loyal to the concept of Clown and never once pulling any punches in his quest to see it through. Without giving too much away, the victims in the film are almost entirely children, and there’s a ballsiness to the proceedings that you don’t often find in modern day films. Watts truly goes for broke, making Clown a standout piece of horror cinema.

Mostly relayed by a delightfully hammy Peter Stormare, the script builds an impressive mythology around that original gag trailer, turning a one-shot joke into what is surely a bonafide franchise waiting to happen. The story of the clown suit’s origin is as engaging as the gooey degradation of McCoy’s human form, and it really helps add a sense of dark reality to the otherwise absurd storyline – Rare Exports accomplished a similar goal, only with Santa.

Yes, Clown does travel down some very dark paths and yes, more than a couple children meet gruesome ends, but make no mistake about it: this is one seriously entertaining film. Played more for scares than laughs (and it gets pretty damn scary – especially if you’re deeply afraid of clowns), Clown is nevertheless a whole lot of fun, embodying the taboo-smashing craziness that made most of us fall in love with the horror genre in the first place.

One wouldn’t be out of line in calling Clown a body-horror film, as it is in many ways cut from the Cronenberg cloth. At first finding himself unable to take the wig and nose off, Kent eventually transforms into a full-blown monster, and the effects are entirely practical and true to the old-school spirit of the film. His teeth fall out, his digits grow, and just wait until you see the color his blood becomes.

By taking a serious approach to material that is, at least on paper, quite campy, Watts has made with Clown a movie that’s more than the dose of silliness that it seemed intent on being. While a lesser filmmaker would constantly be winking at the audience and relying on cheap gags, Watts turned a potential horror-comedy into a straight up horror movie, totally knocking the concept out of the park.

Us horror fans are often complaining about a lack of originality in the genre, and I feel comfortable saying that Clown is precisely the blast of colorful inventiveness that we’ve been waiting for. Feeling like a film from a bygone era, it’s the first purely entertaining horror effort of 2015, catering directly to those of us who watch horror movies to see crazy shit that we simply can’t find anywhere else.

If you’re looking for the ultimate killer clown horror movie, look no further than Clown.

At the time of writing this, Clown doesn’t yet have a release date here in the states, but it did recently hit DVD over in the United Kingdom. So head over to Amazon and grab a copy if you can’t wait – just make sure your home theater is equipped with an all-region DVD player.