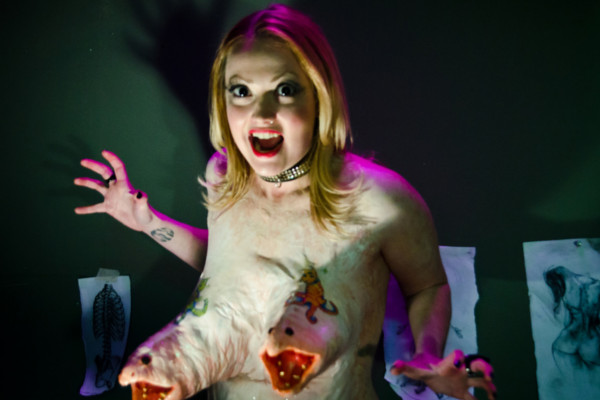 There’s nothing I love more than Kickstarter success stories, particularly when it comes to horror films. Though being beaten over the head with Kickstarter funds admittedly gets a little annoying sometimes, it’s nevertheless awesome to see a young filmmaker use the platform to make a movie he otherwise wouldn’t have been able to, which is precisely the story behind Call Girl of Cthulhu.

Written by Chris Lamartina and Jimmy George, and directed by Lamartina, Call Girl of Cthulhu was successfully funded back in 2012 and centers on virginal artist Carter Wilcox, who falls for a prostitute by the name of Riley. Unbeknownst to Carter, Riley is the chosen bride of the alien god Cthulhu, and it’s up to him to save the world from an ancient cult, who plan on resurrecting their god through Riley.

If there’s anything that differentiates me from most hardcore horror fans it’s that I tend to avoid Troma films like the plague, finding little merit in the childish humor that Lloyd Kaufman has built a respectably enduring career on. It’s not that I’m not a fan of horror comedies but more that I just don’t quite ‘get’ Troma’s particular brand of humor, which of course makes me mostly immune to the charms of Troma copycat films.

I bring this up because it’s quite clear that Lamartina is a huge fan of Troma and was heavily inspired by the films in their catalog, as Call Girl of Cthulhu is as much a love letter to Kaufman as it is Lovecraft, rife with all the things that have made Troma a household name amongst horror fans; obnoxiously over the top characters, pun-heavy teenage humor, buckets of blood and of course, boobies. A whole lot of boobies.

It’s all there, in spades, and it’s impossible to deny that Lamartina made precisely the sort of movie he set out to make. In fact, Call Girl of Cthulhu is undeniably better than most movies that have been released under the Troma label. But alas, since the style he was going for – and totally nailed – just isn’t my cup of tea, this particular cup of tea wasn’t my cup of tea either.

That said, Call Girl of Cthulhu most definitely excels in the effects department, which is one aspect about it that I really appreciated. I’m a HUGE practical effects aficionado and it’s pretty evident that the majority of the film’s nearly $30,000 Kickstarter budget was spent on the various gore and monster effects, which allows for it to really shine, in that particular department.

From decapitations to head explosions, penis monsters to vaginal tentacles, the effects in this humorously named exercise in Troma-inspired excess are quite impressive, and look a whole lot better than the miniscule budget would suggest they might. Hard not to love the D.I.Y. madness on display in the film, and I must commend Lamartina and company for the effects work.

Unfortunately, despite the fun monster effects and even some better-than-you’d-expect acting and directing, Call Girl of Cthulhu just isn’t very entertaining, as it seems Lamartina was more focused on silly (and nauseatingly repetitive) scene transitions and ‘easter egg’ style Lovecraft homages than he was on making a film that’s actually… fun.

As a result, the young filmmaker’s attempt to make his own version of Troma alum James Gunn’s Slither did little more than prove that he’s no James Gunn. In fact, the unmistakable comparisons left me itching to rip the DVD out of my Playstation 3 and slide Slither in its place, which needless to say isn’t a good thing to be feeling, when watching a movie.

To me, Call Girl of Cthulhu serves as further proof that a horror movie – even a silly horror comedy – needs a bit more than blood, boobs and beasts to be entertaining, which is something Troma taught me many years ago. But again I must reiterate that I’m not exactly the target audience for a film such as this, so feel free to take my opinion with a grain of salt.

Just because I don’t care for a movie doesn’t mean I see no reason why others wouldn’t, and if the idea of Lovecraft by way of Lloyd Kaufman sounds like music to your ears, it’s likely that you’ll find a lot here to be entertained by. In fact, if you worship at the altar of Troma, I can almost guarantee that you’ll have an absolute blast with Call Girl of Cthulhu.

There’s no doubt that Chris Lamartina is more talented as a filmmaker than most who aim to make the kinds of silly movies Kaufman does, I’d just personally love to see him rise above those B-movie inspirations and really let his talent shine.

Call Girl of Cthulhu is currently playing the festival circuit, with no release date yet announced. Be sure to keep your eyes on the film’s Facebook page and Twitter account, for the latest info.