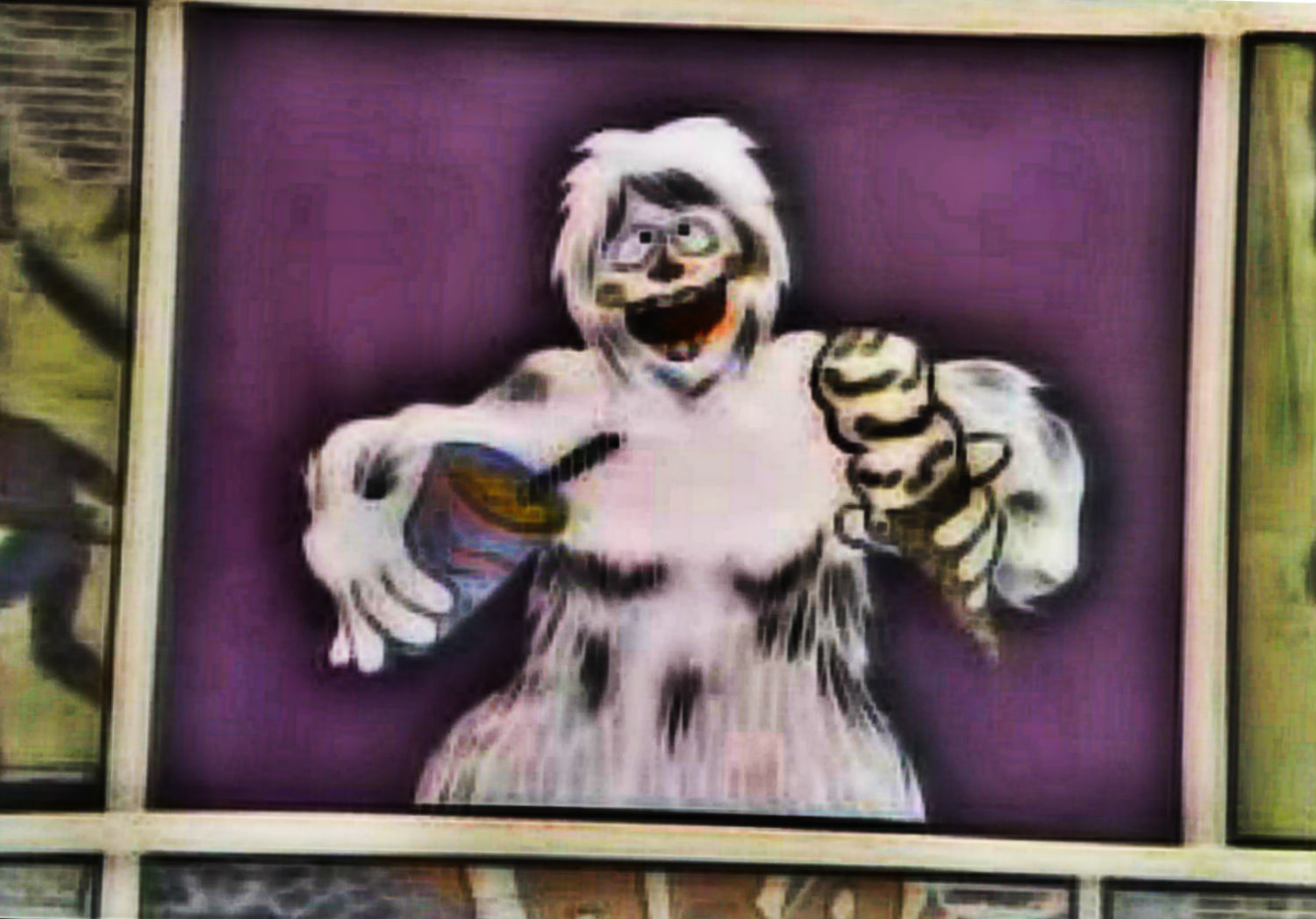 Let me tell you the earliest recurring nightmare of mine I can remember. I must’ve had this same dream a dozen times when I was around 4 or 5. I can’t even believe I’m typing it up now. This may be the single most personal thing I’ve ever written.

In this dream, I’ve been taken prisoner by a mad scientist. Picture the most generic Hanna-Barbera villain possible. Bald head, lab coat, creepy laugh. That type. I’m in a cage or a cell, and the mad scientist directs my attention to two big video monitors on the wall. One shows Steve Austin, the bionic hero of The Six Million Dollar Man, running to my rescue in that famous red jogging suit of his. The other monitor shows the Yeti, about 10-feet-tall and covered in white fur, lumbering ever closer.

The scientist is loving the suspense. Which of these two characters will arrive first? The answer is the Yeti, who comes crashing through the very same wall with the video monitors. I always woke up at that point in sheer terror.

Where do dreams like this come from? Obviously, as with all dreams, some of my unresolved fears and tensions were intermingled with miscellaneous details from my waking life. In retrospect, the cell was not unlike my childhood bedroom. The mad scientist could have been an amalgam of any number of Scooby-Doo or Superfriends baddies. I can’t say I was a devoted fan of The Six Million Dollar Man, nor did I own the iconic Steve Austin action figure, but I was certainly aware of the character. That leaves only the Yeti, and I know exactly where he came from.

Back then, the educational program The Electric Company (1971-1977) had a recurring feature called “Spidey Super Stories” featuring the adventures of a mute Spider-Man (played by lithe puppeteer Danny Seagren in a bodysuit) capable of communicating only though comic-book-style word balloons. In all, 29 segments were produced between 1974 and 1977, many featuring future superstar Morgan Freeman in supporting roles. These segments were re-run on PBS for years, including the 17th adventure, “Spidey Meets the Yeti,” which lodged itself permanently in my subconscious.

In this story, “a furry monster from the frozen North known to his friends as the Yeti” accidentally staggers into New York City due to an inability to read street signs. Longing for home, the confused creature starts sitting on cold things (ice-cream, grape soda, etc.) in the hopes of cooling off during a hot summer day. One of the Yeti’s victims is a disgruntled cop played by Freeman. Spidey successfully sets a trap for the mythical creature using frozen ices purchased from a street vendor (sitcom mainstay Luis Avalos). Freeman wants to run the Yeti in for “illegal sitting,” but Spider-Man agrees to drive the Yeti back home.

Running only about six minutes and laden with funky ’70s guitar music, “Spidey Meets the Yeti” is not exactly the stuff of nightmares. As portrayed by Electric Company regular Jim Boyd, best known for his goofy “J. Arthur Crank” character, the Yeti is far from threatening. More than anything, Boyd looks like the Easter Bunny minus the floppy ears and bow-tie. His “crime spree” is nonviolent and silly, and he’s no match for Spider-Man’s web shooter. This Yeti doesn’t even growl. If he were passing out coupons in front of a supermarket, you wouldn’t bat an eye.

So why did I have nightmares about him? Well, re-watching this story as an adult, I noticed that The Electric Company‘s “Spidey Super Stories” segments used both live-action footage and hand-drawn illustrations in order to replicate the feel of a printed comic book. The cartoon Yeti is not really much more threatening than the live-action one, but he is a little more plausible as a monster. There’s one rather disturbing panel in particular showing a crazed-looking Yeti holding an ice-cream cone in one hand and a frozen drink in the other. The live-action Yeti is harmless and quite passive, but he is also mute and unknowable, and he wanders into people’s apartments without apprehension.

It’s also possible that I got this Yeti conflated in my mind with the similar-looking, but considerably fiercer Wampa, a creature from The Empire Strikes Back (1980). The Electric Company episodes I’d been watching at that time were reruns, and I would have seen “Spidey Meets the Yeti” at about the same time Empire came out. Maybe the two characters were combined into one in my preschool brain. Then again, there were also the annual airings of Rudolph the Red-Nosed Reindeer (1964) with its stop-motion Abominable Snow Monster.

However it happened, the Yeti became a recurring presence in my dreams for quite a while. Most dreams are soon forgotten, but these particular ones stayed with me. I’d think about the Yeti sometimes during the day, and I’d wonder if I would see him that night. Nighttime is already a strange and frightening experience for many children, fearful as they are of the unknown, and the Yeti just made it that much worse for me.

By and by, my acute Yeti-phobia gradually receded, replaced by other, more prosaic fears. But I never lost my general sense of unease about this mythical creature. Fortunately, despite his considerable size, the Yeti does not take up that much room in popular culture. There aren’t that many Yeti-based movies, comic books, video games, etc. It’s not like with vampires or werewolves, where there’s something new seemingly every week. I guess there’s that one Beatles song, “What’s the New Mary Jane?” with the lyric: “She liked to be married with yeti, he grooving such kooky spaghetti.” Hard to argue with that kind of logic.