If you follow Child’s Play creator, Don Mancini on Twitter, you’ve probably noticed quite a resurgence in the man’s career. He just wrapped an inaugural stint as a judge on Food Network’s “Halloween Wars” (one of my favorite Halloween traditions), as supervising writer/producer he helped launch an awesomely creepy new series (Syfy’s “Channel Zero: Candle Cove”), but most importantly, Don has been dropping little hints about the newest chapter in the saga of Chucky!

One of the first bombs hit in early October when Mancini revealed he was already storyboarding for Chucky 7, as it’s currently being called. Then there were several exchanges between Mancini, Jennifer Tilly (who plays Chucky’s bride, Tiffany), and Fiona Dourif (daughter of Brad Dourif, the voice of Chucky, and lead actress from the series’s last film): 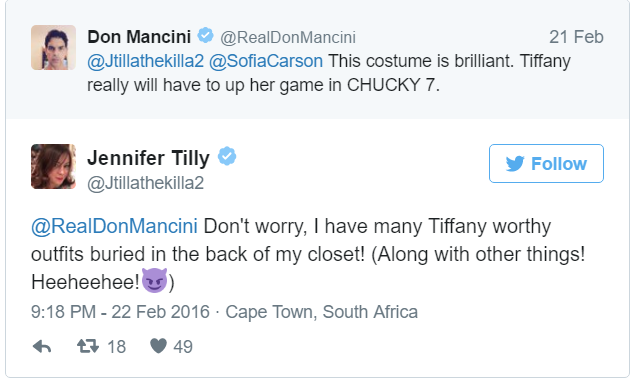 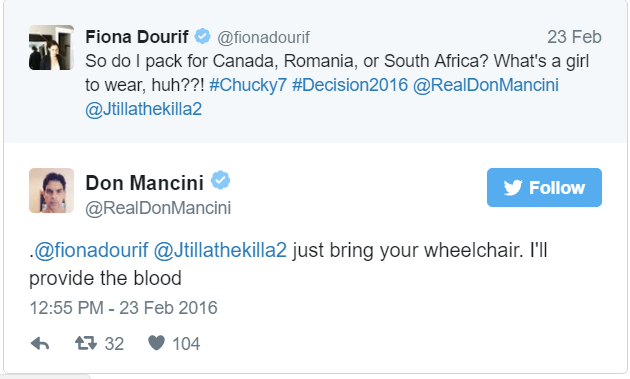 Well, it seems that Fiona’s question my have already been answered. Appearing on the always amazing Blumhouse Shock Waves Podcast, Nick Antosca (showrunner on “Channel Zero: Candle Cove”) was discussing the upcoming second season of the new hit Syfy show. When asked about a social media post Mancini put up touting the wrap in Winnipeg of season 2, “No End House”, Antosca had this to say:

“I think I can say this now, but Don was posting that because he went up to Winnipeg where we shot it – right as soon as we finished, took the same crew, same studio, even MY apartment. He’s now living in my apartment in Winnepeg to shoot his next Child’s Play. It’s a beautiful incestuous horror world“

There you have it folks! Looks like Fiona Dourif will be headed to Canada (if she’s not already there) to once again square off against the demented doll. We also know that Tiffany will be back in action, and rumor has it that original Child’s Play hero, Alex Vincent, will also be making another appearance after his cameo in Curse of Chucky. All of that on top of knowing Mancini is using the “Channel Zero” crew which helped produce some stunningly gorgeous visuals for the first season, has me extremely excited for Chucky’s return.

While there has been no official announcement as of yet, it’s safe to say with all the various rumblings that Chucky will be back to terrorize us horror fans before we know it. With new entries also in the Friday the 13th, Hellraiser, Halloween, and Texas Chainsaw franchises lined up for next year, 2017 is shaping up to be a boon for our favorite 80’s slasher titans.

Listen to the episode of Shockwaves HERE, where Antosca dishes on “Channel Zero”, “Hannibal”, and even dives into details on his now abandoned take on the new Friday the 13th!