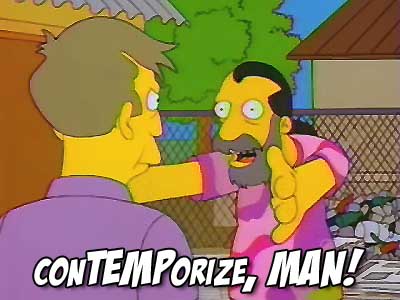 As much as I love the horror community, there are certain things about it that quite frankly boggle my mind, and one of those things is the way that we as horror fans tend to love and praise anything that’s old, and yet hate on or just plain totally ignore anything that’s shiny and new.

Granted, we don’t all do it, but I’ve been fully immersed in the online horror community for many years now, and there’s no denying that a large portion of the fan-base has this hatred toward movies that are new. Or movies that they don’t have nostalgic feelings connected to, I suppose I should say.

Nostalgia has a way of putting a nice sheen of awesomeness over top of things that maybe wouldn’t be so great without these feelings attached to them, and so I understand that it’s really easy to fall into the trap of adoring things that inspire those nostalgic feelings in you, while ignoring and being annoyed by things that don’t. I suppose it’s only natural, and I’m certainly not saying there’s anything wrong with loving and hanging on for dear life to movies and things you experienced in your childhood. Trust me, I do the same thing.

But what I do take issue with is the way that so many horror fans are constantly complaining about a lack of originality within the genre, and yet those same fans are doing nothing but re-watching movies from the past, talking about movies from the past and re-living the so-called glory days of the genre. You hate remakes and sequels, right? Well guess what? The only reason remakes and sequels are being made is because us horror fans are demanding them. Gasp.

We’re the ones that can’t stop buying Freddy merchandise, talking about Michael Myers and watching the Friday the 13th sequels on infinite loops. Is there anything wrong with that? Of course not. But it’s not hard to see why the studios are only interested in putting their money into properties they know we love, rather than original ideas that we’ve shown them we’re not all that interested in. It’s a no-brainer for them, really.

We all bitch about the endless remakes, but at the same time we head out to our local theaters whenever they come out, and support them with our hard-earned dollars. The original horror films that hit DVD and On Demand outlets every single week – the ones we supposedly want more of? Well, we kind of just pretend they don’t exist, don’t we?

Films like Antiviral, Blood Creek, Splinter, Eden Lake, Excision and Wake Wood immediately come to mind as personal favorites from the recent past, and yet what do they all have in common, aside from being awesome? Unfortunately, they share the common trait of never really being talked about, within the horror community. Certainly not as much as the remakes released in the same years.

Again, I don’t want this little rant to come off like it’s being directed at ALL horror fans, because I’m fully aware that there are oodles of you guys out there who have made it your life’s work to spread the word on the new movies and up and coming filmmakers that hit your radar. And that’s awesome. But I can’t help but be annoyed by the way so many fans overlook all that stuff, instead choosing to seek comfort in the arms of Freddy, Jason, Michael and Leatherface… over and over and over again.

What annoys me more than anything is that a simple picture of one of those aforementioned horror icons, posted on a Facebook page, generates hundreds of shares, likes and comments. And yet, when something is posted about an awesome new horror movie that just came out… nothing. Crickets. It’s as if no one really cares. They just want what they’re familiar with. So do we really want new, original horror? Or is what we really want to just forever live in the past, and constantly bitch and complain about the genre not being what it used to be?

Quite frankly, it’s not that the genre isn’t what it used to be, but rather a simple case of everything looking better, when seen through the rear-view mirror. Granted, many horror movies today are lifeless ripoffs of better films from the past, and yes, CGI has totally ruined the awesome gore guys like Savini used to give us, but the fact remains that there are awesome new horror films being released every year, and it’s largely our support of that original horror that dictates whether the genre moves forward into the future or lies dormant in the past. So again I ask; what do you really want?

I think it’s time we stop being afraid of movies with release dates past the 1980s, and start embracing and giving some of our love to the new films, the new filmmakers, and the iconic villains of the future. Guys like Freddy and Jason will always be there for us, to comfort and wrap us up in their nostalgic blankies, but if we as fans remain in the past, so too does the genre as a whole. And what fun is that?

I’m not telling you to stop living in the past. I’m just suggesting that you start spending a bit more time in the present. So the next time you contemplate popping Dream Warriors into your DVD player for the 154th time, reach for something new, and totally unfamiliar, instead. What’s the worst that could happen?

Watch new movies. Spread the word on new movies you like. Rinse. Repeat.

In closing, I ask the age-old movie buff conversation starter; have you seen anything good lately? Comment below and let’s talk about recent horror movies – within the last couple years – that you enjoyed and recommend to fellow horror fans!