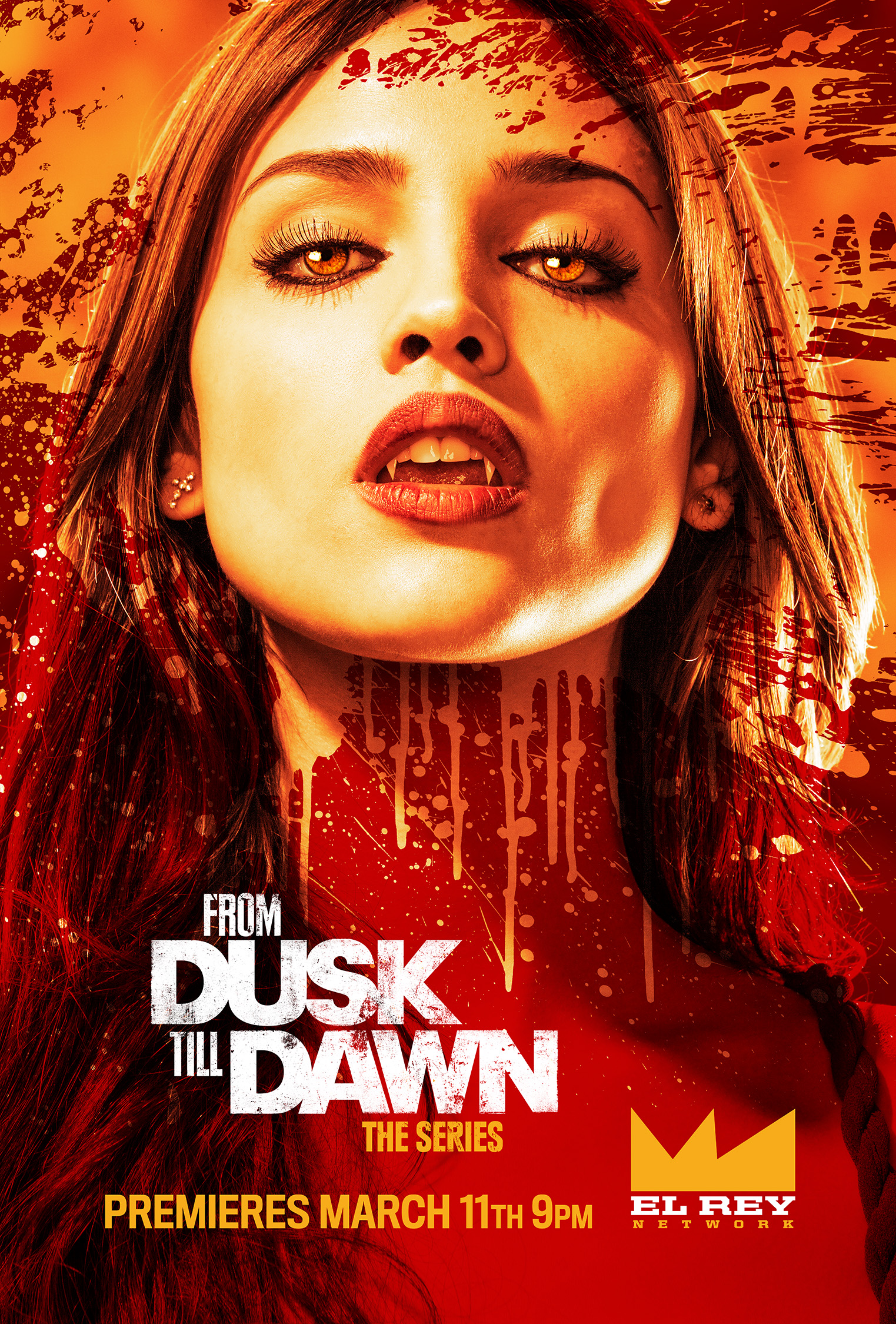 There are so many horror-themed TV shows airing right now that I almost can’t even keep track of them all – and I certainly don’t have the time to watch them all.

True Detective just came to an end this past Sunday night and The Walking Dead is currently wrapping up its fourth season, which has a few remaining episodes. On top of those, NBC brought back Hannibal for its second season a couple weeks back, mere days before A&E kicked off the second season of Bates Motel.

Too much to take in all at once? I’m not complaining, but yea, it most definitely is!

The latest show to be added to the ever-growing pile is From Dusk Till Dawn: The Series, which like Hannibal and Bates Motel is of course based on a fan-favorite feature film – can you guess which one?!

From Dusk Till Dawn: The Series premiered just last night on Robert Rodriguez’ brand new El Rey Network, but if your cable provider doesn’t carry the channel, have no fear, because each new episode will be available for streaming on Amazon, one day after their Tuesday night premieres. The only bummer is that the episodes cost $1.99 apiece, with a bit of a reduced rate when you order the full 10-episode season pass.

Is the show worth your money, and perhaps more importantly, your time? I checked out the pilot episode earlier today, in an effort to find out.

Directed by Robert Rodriguez, the inaugural episode of the show kicks off by giving us a glimpse at the snake-filled origin story of the super sexy Santanico Pandemonium, who was of course played by Salma Hayek in the 1996 film. From there, the bulk of the episode is essentially a remake of the first 10 minutes of the film, introducing us to the Gecko brothers.

Just like in the movie, Seth is calm and collected while Richie is off his rocker and highly unpredictable, and the two brothers are en route to Mexico, following a highly profitable bank heist. But first, they make a pit stop at a small town liquor store, where guns blaze and blood flies.

The idea behind From Dusk Till Dawn: The Series is that Robert Rodriguez wanted to expand on the story and characters that he and Quentin Tarantino brought to the table back in 1996, and the pilot episode effectively lays the groundwork for him to do just that. What was merely a pre-credits sequence in the film is bulked up into a 44-minute fully fleshed out story in this premiere episode, which allows us to get to know Sheriff Earl McGraw a bit more, and even infuses a brand new character into the proceedings; McGraw’s partner Freddie Gonzalez.

It seems the Modus Operandi of the series is not just recreating things we’ve already seen but adding new layers to the mix, which is something that seriously piques my interest, as a big fan of From Dusk Till Dawn. Rodriguez brings enough new elements and little twists and turns to the table to make the episode interesting, even for those who know the Benny’s World of Liquor massacre like the palm of their hand, and it’s that fresh new perspective on a familiar story that I feel is going to make From Dusk Till Dawn: The Series a real treat for fans of the film. It’s like going back and reading a novel after watching the film it was adapted from, which is always a fun thing to do.

One of the most notable new additions is that Richie Gecko has the ability to “see things others can’t see,” and I’m not just talking about fantasized sexual requests from female hostages. Several times throughout the pilot, Richie has visions of monsters, and even Santanico Pandemonium herself, which is an element that’s going to be interesting to see play out.

Rodriguez recently revealed that the characters won’t be arriving at the infamous Titty Twister until halfway through the season, so I can only assume Richie’s visions will serve as a way to avoid an inevitably disappointing lack of vampires, in the first half of the season. We shall see, though I personally must admit that I’m totally cool with the show only focusing on vampires in the second half – it worked for the movie, so why not, right?

All too often our favorite movies are remade by people who don’t care about much more than lining their pockets, so it’s really awesome to see Rodriguez go back and revisit the film that put him on so many of our radars, while at the same time bringing fresh and new elements to the table. Again, a real treat, is what I think – and hope – this series will turn out to be. As with all new shows, only time will tell if I’m right about that.

I’ll be buying Episode 2 next week, so you can color me impressed with what I’ve seen thus far.