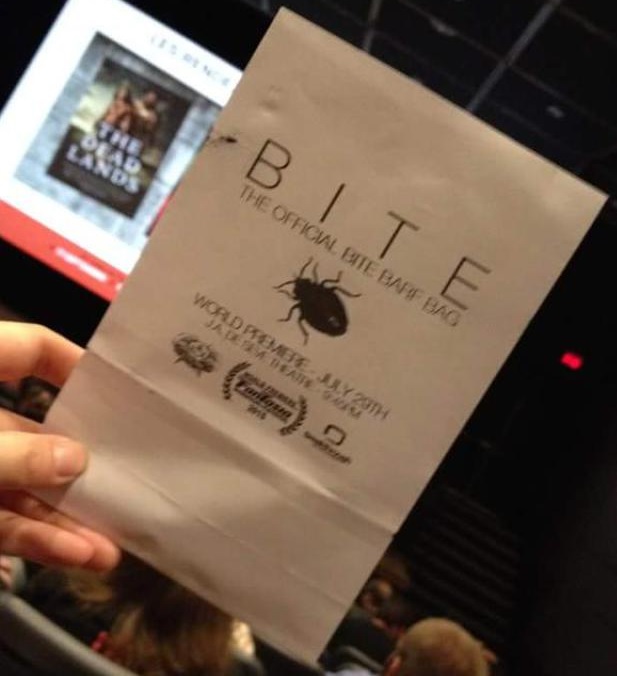 Chad Archibald’s upcoming body-horror film Bite recently caused quite a stir at this year’s Fantasia International Film Festival, after an ambulance had to be called to the screening. According to reports, one member of the audience fainted during the movie while another vomited, which is just about the best press a horror movie could possibly receive. Whether or not it was a marketing stunt, well, we may never know.

It’s interesting to note that airline-style barf bags were handed out at the Fantasia screening of Bite, and it’s certainly not the first horror movie to spawn such a unique little promotional item. Perhaps the very first horror movie to employ the attention-grabbing tactic was 1970’s Mark of the Devil, a German film that was memorably graphic. It was advertised as “the most horrifying film ever made,” a campaign that contributed greatly to its box office success.

The first film rated ‘V for Violence,’ Mark of the Devil‘s smart marketing tapped into the inherent human desire to be grossed out, and the barf bags ensured that anyone with an interest in horror was going to be at the theater on opening night. After all, what self-respecting horror fan wouldn’t immediately go see a movie that promised gore and brutality so vile that a bag would be needed to catch all the bodily fluids it would make you lose control of?

It was the company Hallmark Releasing Corporation that came up with the marketing for Mark of the Devil, and they launched a very similar campaign for 1971’s Spanish zombie film Tombs of the Blind Dead. In fact, they re-purposed the very same barf bags from just one year prior, simply placing a new sticker over the old one and crowning Tombs of the Blind Dead the new “most horrifying film ever made.” Gotta love a company upstaging their own releases. 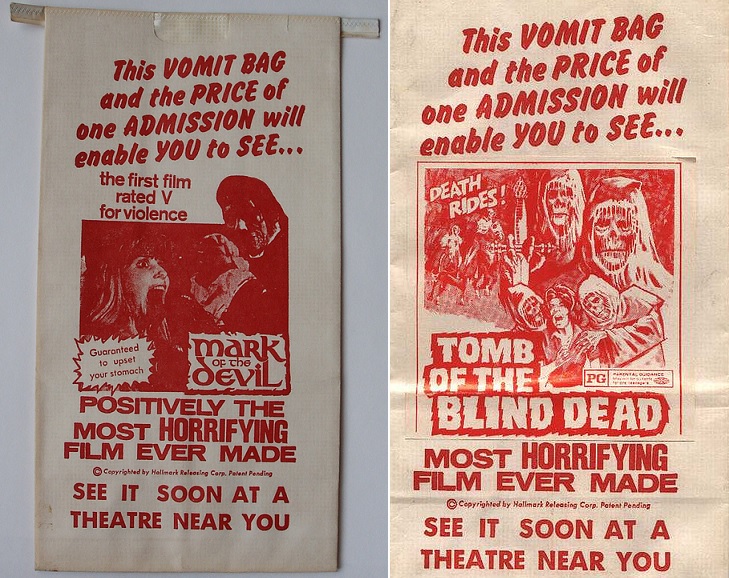 Several other horror films throughout the 1970s received the barf bag treatment, including Mario Bava’s A Bay of Blood (aka Carnage), When the Screaming Stops, and Lucio Fulci’s Zombie. The campaign for Zombie extended to the film’s original theatrical trailer, which noted that barf bags would be provided to anyone who went to see the film and found themselves unable to stomach the graphic brutality – though it’s hard to say whether or not theaters carried through on the promise.

Though cinema gimmicks mostly died off by the time the 1980s rolled around, the barf bag still proved quite popular as a means to entice viewers into seeing the next gore-fest. Hellbound: Hellraiser 2, Cannibal Ferox, and Class of Nuke ‘Em High each received branded barf bags, while Magnum Entertainment’s original VHS release of Peter Jackson’s Bad Taste came equipped with one – and humorously instructed you to not mistake your vomit for party dip.

After being mostly absent throughout the 90s, promotional ‘sick bags’ returned in the early 2000s thanks to Anchor Bay, who whipped them up to promote their releases of both Wrong Turn and Lucio Fulci’s The Beyond (on VHS and DVD). Other companies followed suit, with The Woman and Alexandre Aja’s brutal remake of The Hills Have Eyes spawning collectible vomit receptacles of their own – review screeners of the former were cleverly sent out in barf bags.

So you see, barf bags are somewhat of a tradition here in the horror world, and I think I speak for the whole community when I heap praise upon Bite for being the latest in a long line of gross-out movies to encourage us all to puke. It’s good to know that the cinema gimmick isn’t quite dead, and I’m sure William Castle was smiling down from the heavens when audience members put their barf bags to good use at Fantasia this year.

If that’s not proof that the horror genre is still alive and well, then I’m not sure what is.