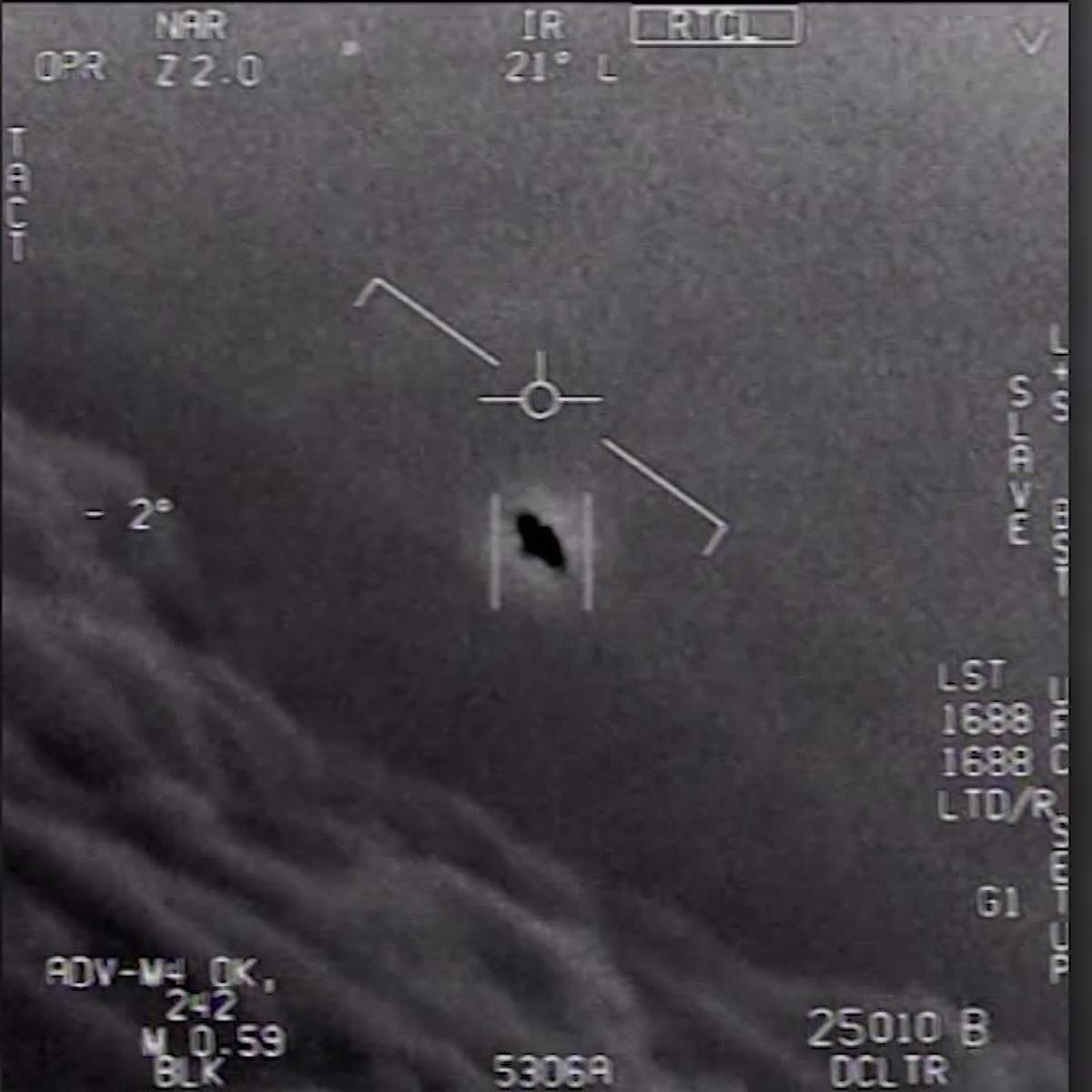 After observing the unusual sight, I made sure to document what I’d seen, as it was very interesting, and I wanted to remember all the details for future reference. I’m glad I did because some of my details closely matched another widely-publicized sighting.

I’ve told a few people about what I saw, but I think I should officially publish an account of it before the Space Force tracks me down and flashes me with a memory-erasing Neuralyzer.

First, it should be mentioned that for reasons bureaucratic in origin and peculiar in emphasis, we’re now supposed to call them Unidentified Aerial Phenomenon, or UAPs instead of UFOs.

I was driving to work in Tyson’s Corner, Virginia early in the morning (sometime between 6:00 and 7:00 AM). I remember that the sky was dark, but starting to lighten. According to timeanddate.com, sunrise would have been at 6:50AM on November 14th, so I would have seen the object in pre-dawn lighting conditions.

I was at the intersection of Route 7 and Tyco/Westwood Center Drive heading southeast on Route 7. 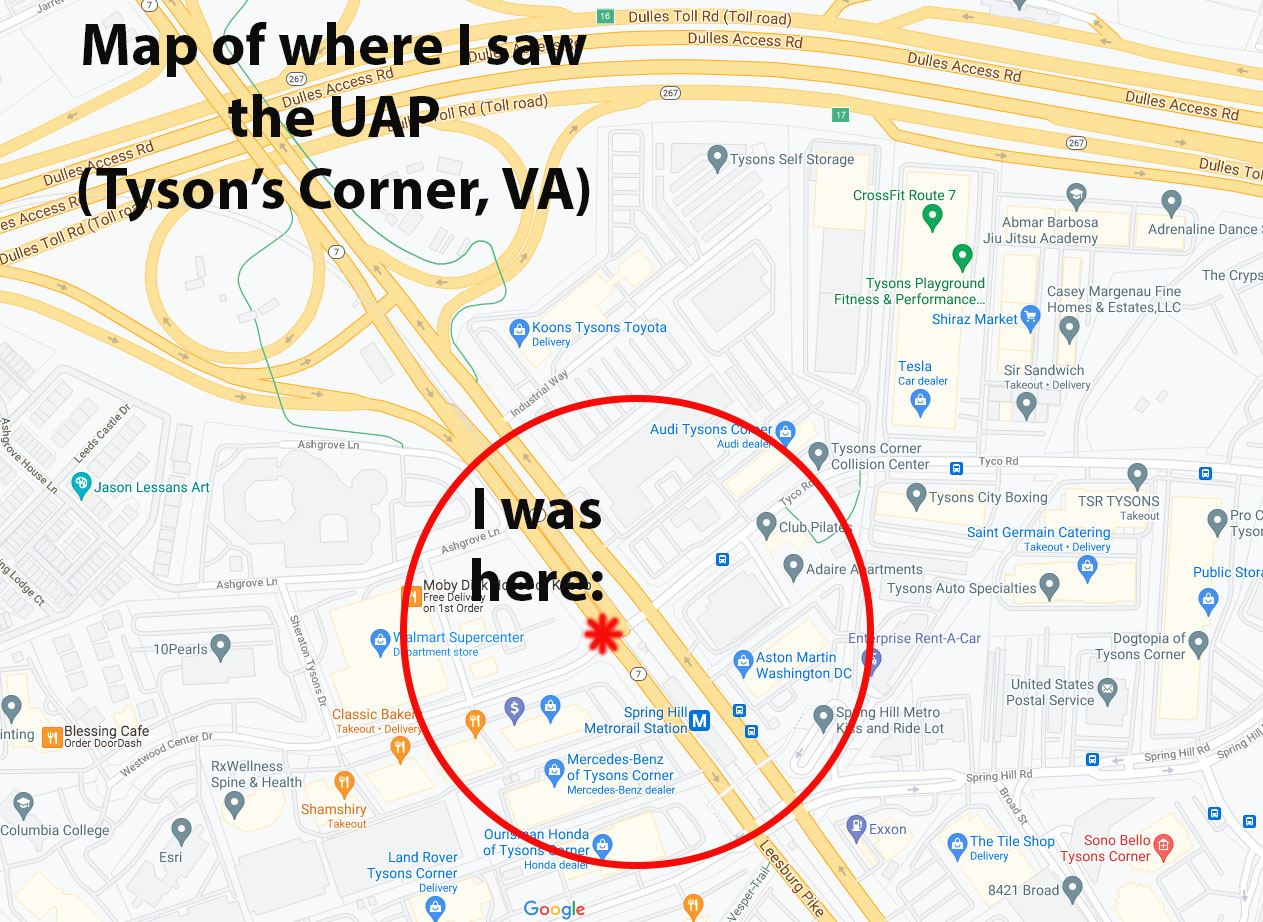 Suddenly, I caught sight of motion out of the corner of my eye. I looked up and to the right through my car windshield, just as something zipped by diagonally across my field of view. One second, and then it was gone. 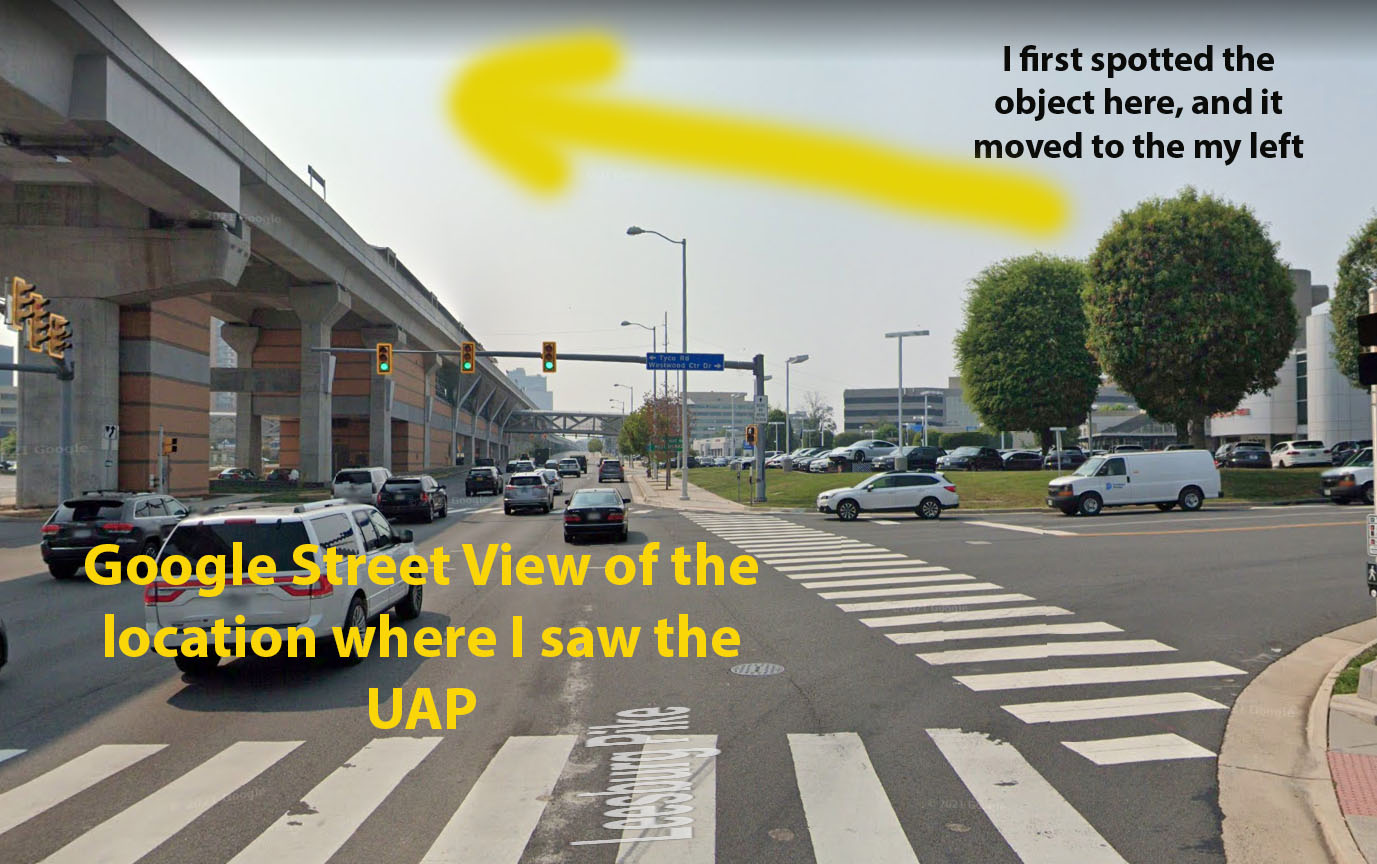 The thing had no lights on it, and made no noise. It was very low — higher than the street lights, but not by much. Immediately, my mind thought “helicopter” or “drone,” but as the apparition vanished, I quickly realized that it could not be either of those two things.

The object was shaped roughly like the front part of a helicopter — it was oval and oblong, with stubby fins. But it had no rotor, no tail, and — more importantly — no massive reverberations and rushing wind that always accompany a low-flying helicopter. I have been very close to helicopters taking off, landing, and flying low before and it is not something you can mistake. The absence of lights, sounds, and the essential parts of chopper anatomy ruled it out as a helicopter.

It was too big to be a drone; if I had to guess, it was at least 20-30 feet long. It also moved too fast to be any sort of commercial or hobby remote controlled vehicle. It lacked any of the features of drone anatomy — either dual or quad rotors, or the wings that Military-style drones have.

Could it be a plane? Again, it didn’t have any wings and was far below the safe altitude for aircraft, so I don’t think so.

When I got to work, I sent my wife an e-mail, detailing the encounter. Here is a screenshot of my time-stamped e-mail from November 14th, detailing the events above while it was still fresh in my brain:

My sighting was corroborated by breaking UAP news one month later.

Note the date — I made my sighting before the viral video of the “Tic Tac” UAP documented by a Navy pilot from the USS Nimitz made headlines. While the Navy UAP encounter happened in 2004, the video wasn’t released until December 16, 2017, and I didn’t watch it until several months later.

For those who don’t follow UAP news regularly, on December 16th, 2017, a series of video clips from Naval fighter jet cameras were released, showing an inexplicable object zipping around the sky, seemingly defying the laws of physics. You can read all about that story and watch the videos for yourself here. You can also read a full interview with the Navy Pilot who captured the footage here.

When I saw the video and still images from the Navy footage, I immediately recognized the stubby object. I now believe that I saw the same phenomenon that was documented in the USS Nimitz incident, or at least something that exhibited the same appearance and properties.

Since the USS Nimitz incident in 2004 and the video release in 2017, no one in the Military, scientific community, or Government has been able to confirm or explain what the filmed object was.

Neither have I been able to determine what I saw on my early morning commute four years ago.

I forgot to mention one important detail: the first report of the USS Nimitz UAP encounter with the “Tic Tac” was also on November 14th, 13 years earlier: