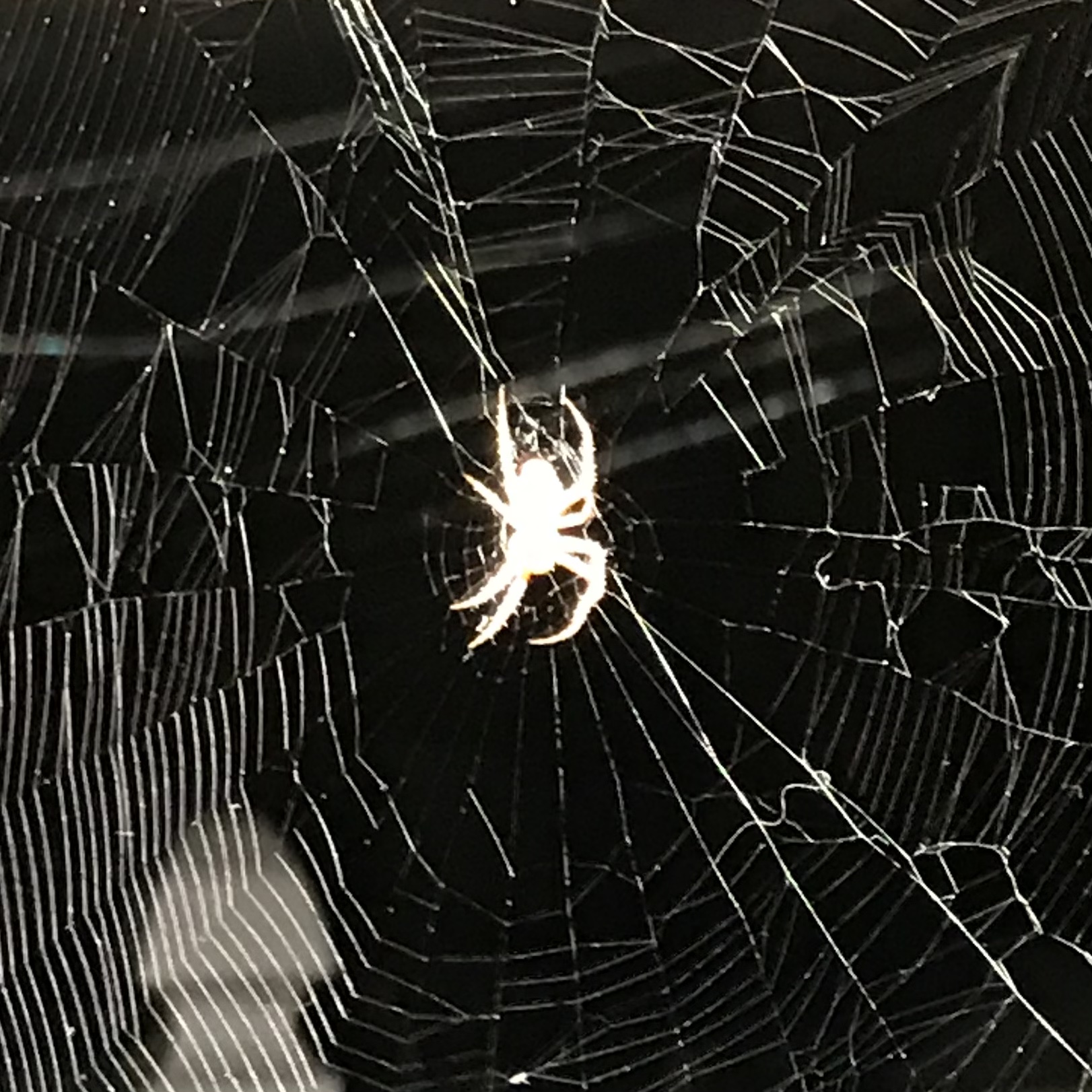 She heard it again, that ominous creak in the dark. With the blackout rendering her bedside lamp powerless, Susan felt trapped in her bed, closed off from escape by the darkness. Fear slowed her mind, but eventually she remembered the flashlight on her phone. She turned on the phone light and the room was bathed in a deadly blue glow.

“Hello?” she asked, as if a demon or murderer would be appeased by a polite conversation starter. Thankfully, there was no response. She sat in silence, warding off further terror with the light of her phone, until suddenly the instrument in her hand rang out with the ugly, digital tone that meant an unknown number was calling. Desperate for any contact with the outside world, she answered it.

“Hello?” she squeaked into the phone. She held it in front of her in speaker mode so the camera light could continue assuring her that she was quite alone in her room.

“Hi, Susan. It’s Joan, your downstairs neighbor.” Susan’s mind raced. Had she ever given Joan her number? They’d only met in the hall a few times in passing. “I’m calling to see if your power’s out. I was going to call it in, but wanted to make sure it wasn’t just my unit.”

Susan heard another creak from somewhere in the room, but she decided it was just a trick of her imagination. She’d been afraid of the dark since childhood, and this power outage was clearly playing games with her mind. Just to be sure, she shined the phone light into the corners.

“Yeah, mine’s out too. Must be the whole building.” She suddenly realized that the silence in the room was deafening, without the usual whirls and low buzzes from appliances and gadgets that, for the moment, have all gone dead. If man or beast was indeed lurking in the shadows, as her overactive brain had tried to suggest, surely she would have heard something. (But you have heard something, haven’t you, that darker part of her mind whispered.)

“I normally wouldn’t dream of calling this late,” the neighbor explained, “But I knew you were awake. I heard you walking around up there.”

The words froze Susan’s spine and her fingers clutching the phone went numb. “What…?” she stuttered weakly.

“Don’t get me wrong,” Joan said brightly. “I don’t mind being able to hear you up there. It’s not your fault the floor is so creaky. Apartment living, right?” Joan chuckled, oblivious to the terror coursing through her upstairs neighbor.

“I haven’t been walking around,” Susan said, as if continuing the conversation could help keep her sane. “I’ve been alone here, in bed, all night.”

Joan laughed again, as if mocking Susan’s dread. “Really, it’s fine. I’ve heard you pacing around up there these past few nights. I get it, I’m a light sleeper, too. In fact, if you ever want a late-night chat…”

Susan’s fear turned into irrational anger. “I’m not a light sleeper! I sleep like the dead!” she yelled into the phone and into the darkness.

No response from Joan, who was seemingly too surprised by the outburst to speak. Susan stared at her screen as the digital seconds ticked past. “Hello? Joan? I’m sorry…” The call ended. Susan immediately hit redial, desperate to apologize, desperate to keep her life-line to the real world alive.

The phone rang, but no answer. No voicemail. Just a click, and the line was dead. Silence again. Followed by another creak, louder this time. Definitely in the room with her. Definitely not human. Again. And again. Closer. And closer. Susan tried to scream, but it was too late.

In the apartment below, Joan sat in the dark. With plenty of charge left on her phone, she put her earbuds in and started her favorite podcast, Spooky Bedtime Stories, to drown out all the noise coming from above her. It’s one thing to be inconsiderate of your neighbors at such a late hour, she thought to herself, but it’s another thing all together to make denials and be rude about it.

Maybe blocking Susan’s number was too extreme, but she could deal with that tomorrow. For now, she just wanted to focus on the podcast, a riveting tale of a haunted house, told with such passion and conviction, it could almost make her believe in ghosts.