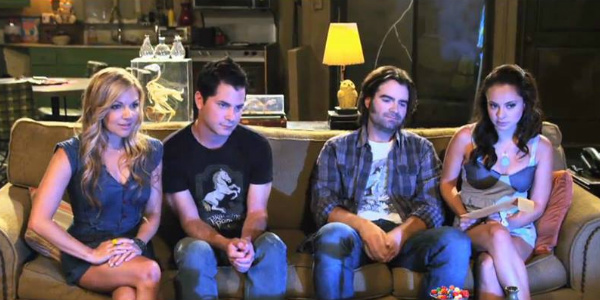 After a two year hiatus, Entertainment Weekly broke the news that the horror-sitcom Holliston would finally be returning for its third season. The popular show created by Adam Green (Hatchet, Digging Up The Marrow, Frozen) follows Green and long-time friend Joe Lynch (Everly, Wrong Turn 2) as fictional wannabe horror filmmakers struggling to make ends meet in Holliston, MA. They’re balanced out by Joe’s Girlfriend Laura (played by Laura Ortiz) and Adam’s ex-girlfriend Corri (played by Corri English). A slew of horror icons (like Tony Todd, Kane Hodder, Danielle Harris, Derek Mears, etc.) make cameos, while Adam and Joe’s boss is played by Dee Snider of Twisted Sister (in a parody version of himself from the hair metal glory days). In short, Holliston is like The Big Bang Theory for horror fans without horror fandom being the punchline for every joke.

Holliston developed a cult following on FEARnet, but the channel was unfortunately dissolved by Comcast. However, GeekNation (which also hosts Green and Lynch’s successful Movie Crypt podcast) will be the new home for Season 3 of Holliston. This new home is important not only because it will be “saving” the show, but this will also allow the show to be discovered by an entirely new audience. FEARnet was arguably the best television channel for horror fans, but if you weren’t a die-hard horror fan, it was likely that you didn’t subscribe to the station. GeekNation covers all things geeky, and this will bring the show to a wider variety of people.

Sure, Holliston is going to have plenty of jokes that are geared to horror fans, but the success of the show isn’t solely determined by whether or not we laugh at jokes about Pumpkinhead sequels. The success of Holliston is that it follows people that so many of us can relate to. We’ve all had a boss that rolled their eyes at our horror T-shirts or friends that are creeped out by some of our movie posters. We’ve all broken up with a significant other because they didn’t “get” our fandom, but more importantly, (for the most part) we all know what it’s like to struggle in the hopes of following our dreams.

Most of the popular sitcoms of today follow families and friends in idyllic apartments in New York City, or million dollar homes in beautiful neighborhoods. Holliston, however, follows people living in a genuine shit-hole apartment with terrifying neighbors. Sometimes the episodes don’t have happy endings wrapped up after 30 minutes, and it’s refreshing to see considering life doesn’t work that way. For the non-horror fans, however, Holliston shows that a love of horror films doesn’t make you a dangerous deviant.

I can’t tell you how many times a side character on a television show has been introduced as a horror fan and how their love of horror is used to show that they’re a “weirdo” or “dangerous.” Every day the news outlets try to blame a love of horror for violent actions, when it is simply not true. Horror is a vital part of the show’s appeal, but the show is accessible for more than just horror fans. Heartbreak, employment struggles, embarrassing incidents, bad dates, and online blunders are things that happen to all of us, and Holliston lets us all laugh at the misfortunate of others.

Holliston: Season 3 is set to return sometime in the Summer of 2016 on GeekNation, and I couldn’t be more excited. In Market Basket We Trust.