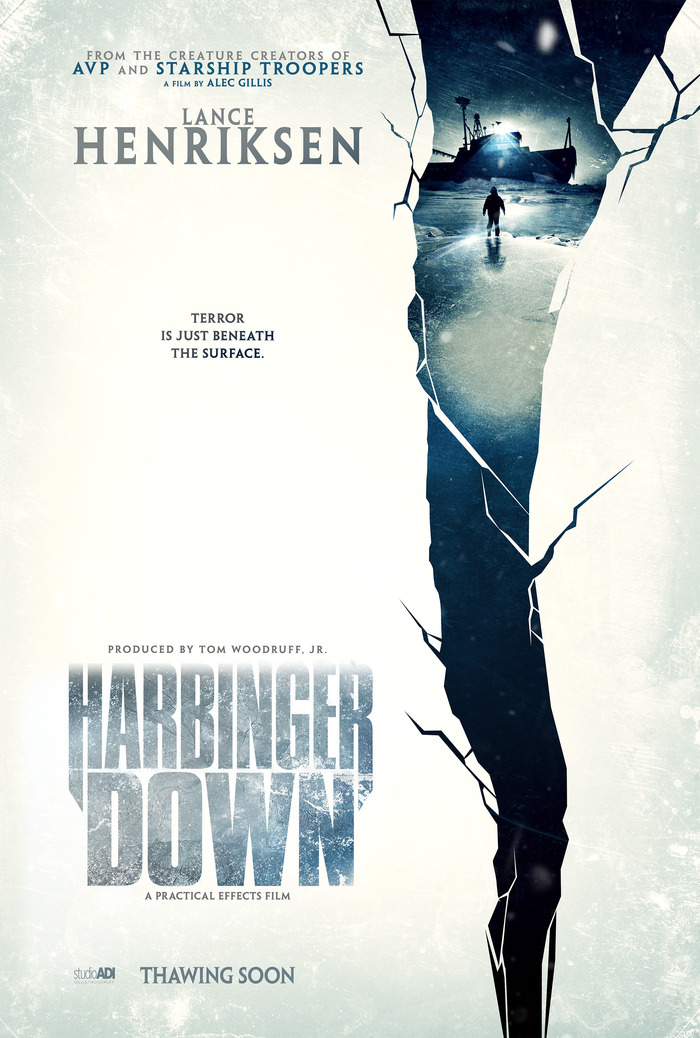 Though Kickstarter is often seen as a place for independent artists to go in order to get funding for their films, it’s also a great place for established filmmakers to seek financing for projects that the studios they often work with just aren’t interested in backing.

Such is the case with Harbinger Down, a project funded on Kickstarter around this time last year, with two big names attached to it. Those names are Alec Gillis and Tom Woodruff Jr., who together run the effects company Amalgamated Dynamics Inc., and have brought iconic creatures to life in films like Pumpkinhead, Aliens, Tremors and Predator.

Woodruff is also the man underneath the prosthetics and makeup in many of the films the duo has worked on, playing Pumpkinhead in the original film and even Gillman in The Monster Squad.

Harbinger Down is a love letter to the practical effects the two artists love so much, while also serving as an apology for the mess that was 2011’s prequel/remake of The Thing. Allow me to explain.

One of the things – no pun intended – that immediately piqued my interest about The Thing ‘pre-make’ was that the director promised practical effects would be utilized as much as possible, just as they were in John Carpenter’s remake of The Thing from Another World. Indeed, Gillis and Woodruff were hired to bring the various monsters and creatures to life, and what they came up with was some of the coolest looking shit in recent years.

Watch the video below, to see what I mean.

So where then were these awesome practical effects in The Thing, you ask? Well, the unfortunate fact of the matter is that the studio decided to almost entirely use CGI to replace the incredible work that the FX masters spent so much time creating, essentially erasing the majority of their contributions from the finished film. And that’s why the movie is so loaded with terrible CGI, and so devoid of the gruesome practical effects we were promised.

Upset by what went down with that project, and disgusted by Hollywood’s reliance on modern day technology and lack of interest in the old school art of makeup FX, Gillis and Woodruff decided to take matters into their own hands, taking to Kickstarter to raise the funds necessary to bring a film of their own to life, which they’d be free to make without idiotic studio-heads breathing down their necks and messing it up with asinine decisions.

In a nutshell, that’s the story of how The Thing prequel directly led to Harbinger Down, which raised nearly $400,000 on Kickstarter last June, thanks to over 3,000 horror fans who are totally sick of Hollywood’s gross misuse of CGI.

Exactly one year later, the trailer for Harbinger Down has just hit the net, and one thing is immediately clear while watching it; this is very much intended to be a response to Universal’s botched attempt at bringing The Thing back to theaters, and a chance for Gillis and Woodruff to make the film they were falsely led to believe it was going to be.

Written and directed by Alec Gillis, Harbinger Down centers on a group of grad students who have booked passage on the fishing trawler Harbinger to study the effects of global warming on a pod of Orcas in the Bering Sea. When the ship’s crew dredges up a recently thawed piece of old Soviet space wreckage, things get downright deadly. Now the crew is exposed to aggressively mutating organisms, and after being locked in ice for 3 decades, the creatures aren’t about to give up the warmth of human companionship.

Check out the Harbinger Down trailer below, which stars two of my favorite things on this planet; practical effects and Lance Henriksen!

No word yet on when Harbinger Down will be unthawed, but you can “like” the film’s official Facebook page to keep tabs on it. Also head over to the original Kickstarter fund to learn more, and see the film’s creature concept art!