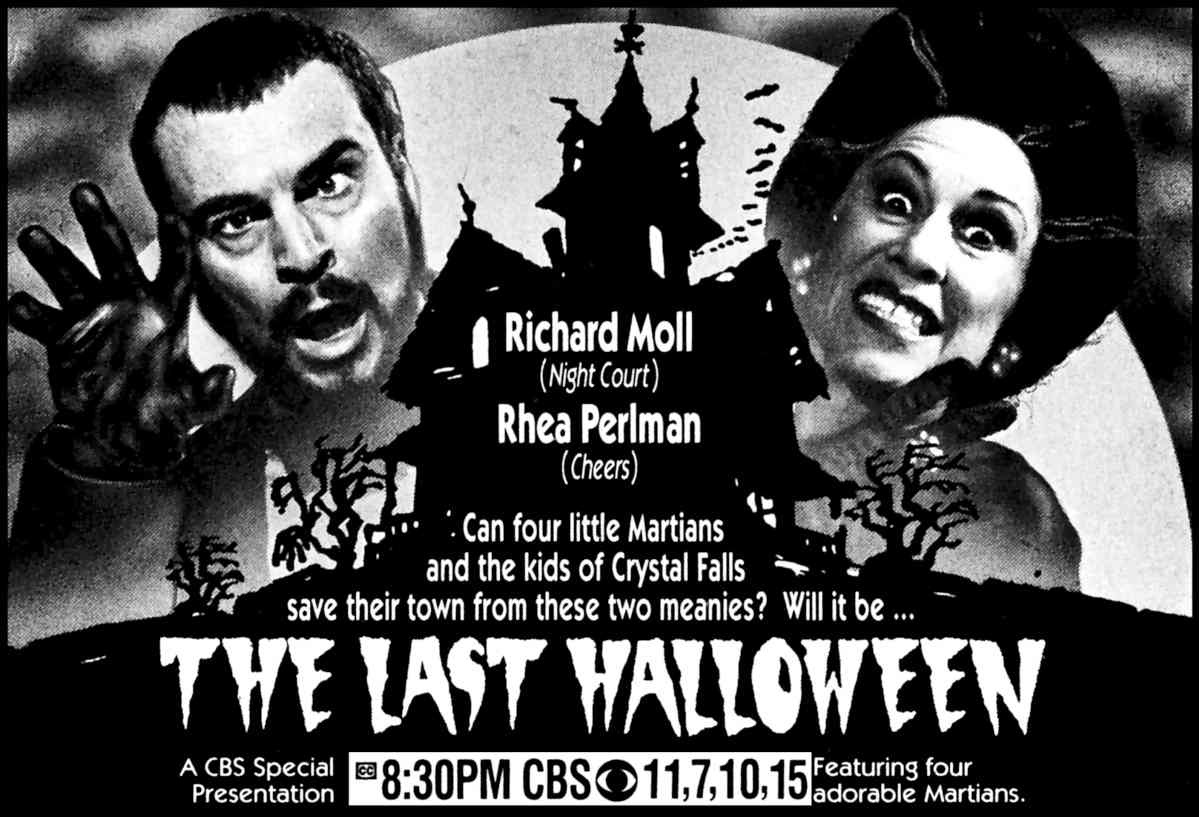 The cool thing about the Halloween season is that EVERYONE suddenly embraces and celebrates the things we love all year round. Non-horror television shows have proven to be no exception to that rule over the years, often getting their horror on in the weeks leading into the greatest holiday of the year. No show did Halloween better than Roseanne, but that’s not to say there aren’t other gems out there.

In addition to popular shows taking a break from their usual routines and spreading a little Halloween cheer throughout October, it also wasn’t uncommon back in the day for networks to put together standalone Halloween specials, as a way of capitalizing on the holiday and pulling in those viewers with an interest in all things seasonal and spooky. Back in 1991, CBS went all out in celebration of the big day.

Airing on October 28th, 1991, and produced by legendary animation studio Hanna-Barbera, The Last Halloween mixed live action with groundbreaking visual effects courtesy of Industrial Light & Magic, the company George Lucas launched in 1977 with Star Wars. By 1991, ILM had already become a major player in Hollywood, thanks to films like E.T., Poltergeist, Back to the Future, and Ghostbusters 2.

And it was the impressive visual effects work that ensured The Last Halloween would live on (in some degree) for decades to come, as the standout contributions from Industrial Light & Magic, along with animation company Pacific Data Images, nabbed the early ’90s Halloween special a Primetime Emmy Award in the ‘Outstanding Special Visual Effects’ category. Not hard to see why, when revisiting this oddball classic.

Okay, so the effects aren’t exactly mind-blowing nowadays, but remember: 1991! 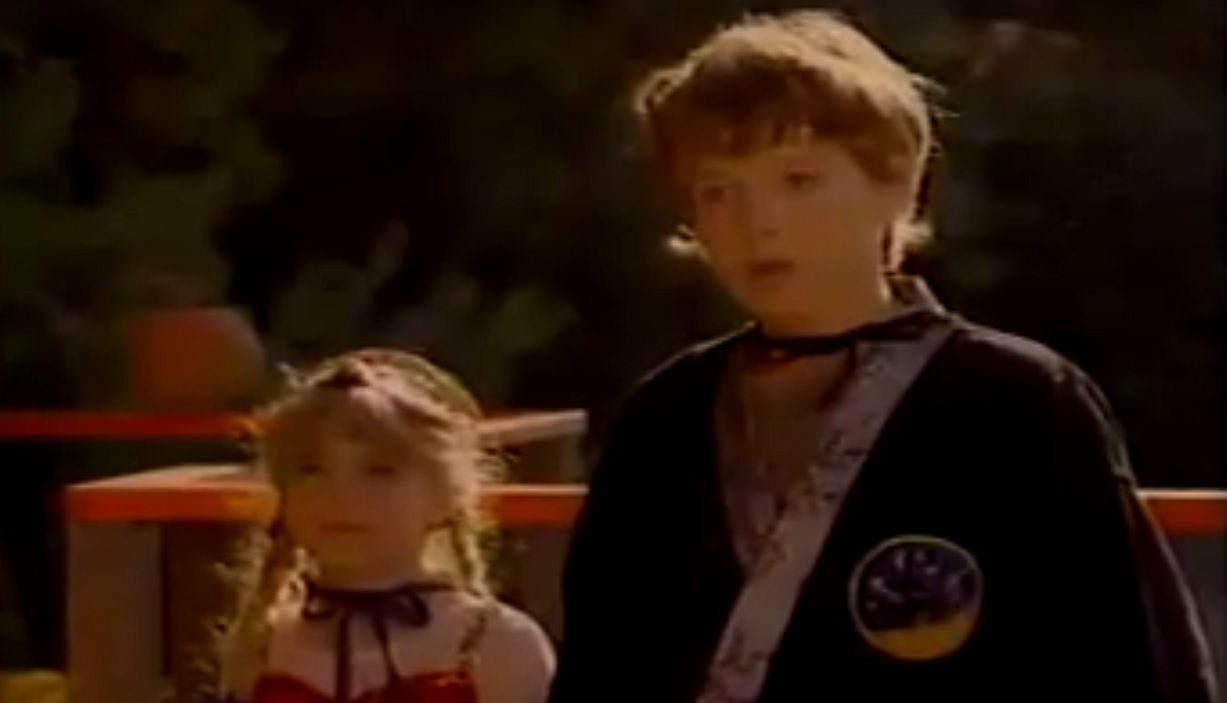 Written and directed by Savage Steve Holland (director of John Cusack films One Crazy Summer and Better Off Dead), the 20-minute special is set in the fictional town of Crystal Falls, which at the start is invaded by four benevolent alien beings. Why, you ask? Well, you see, their home planet has completely run out of coobi, and their mission is to travel to Earth on Halloween and replenish their supply.

Coobi? What the fuck is coobi? It’s the martian word for candy, DUH.

We’ll get to the intergalactic characters in a bit, but first, the humans. Our protagonists are young brother and sister Michael and Jeanie, who recently lost their mother – Jeanie is unable to move on, wearing the special costume mom made her every single Halloween since her passing. As for the antagonists, they’d be over the top villains Mrs. Gizbourne (Rhea Perlman) and Lurch-like assistant Hans (Richard Moll).

The title of the special is derived from the dilemma Michael and Jeanie’s father is facing, as the candy company he runs is forced to go out of business in the wake of a nearby lake drying up. Nobody is sure where the water is going, but having to rely on expensive electricity rather than the natural power of the lake, daddy has no choice but to close up shop. No candy = no more Halloween = THE LAST HALLOWEEN. 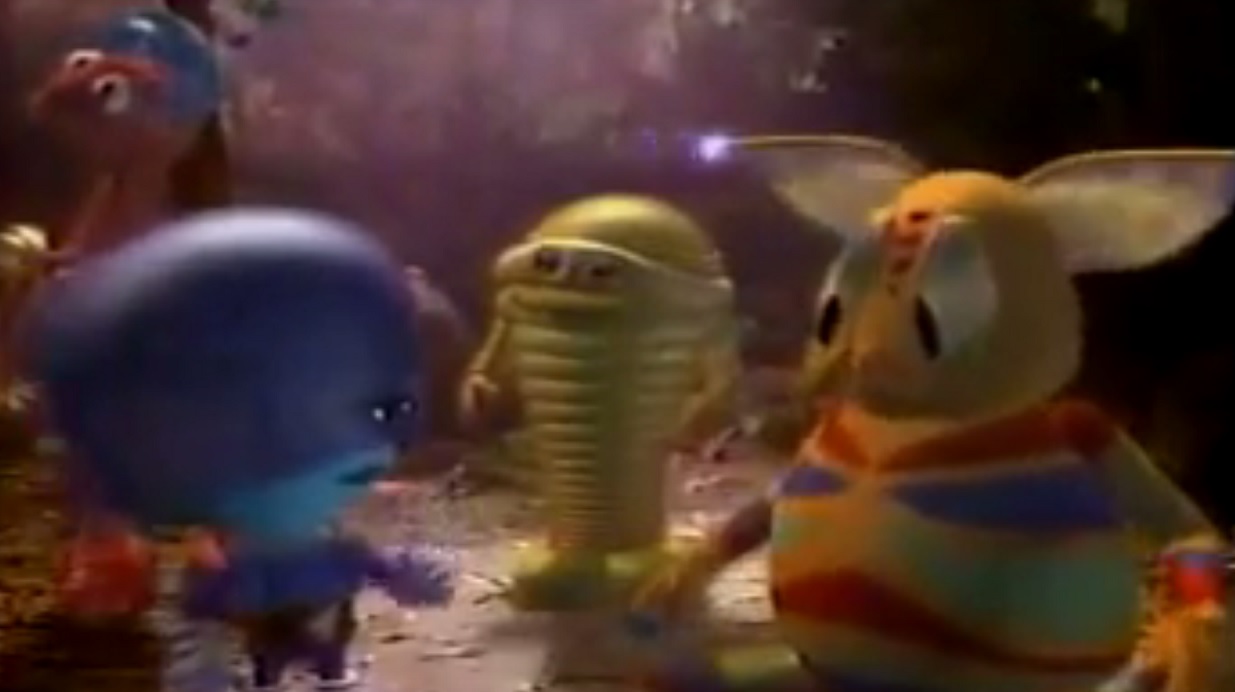 Meanwhile, the aliens have arrived in Crystal Falls, unaware that Earth isn’t faring much better in the coobi department. Voiced by Frank Welker, Paul Williams, and Don Messick, their names are Gleep, Romtu, Scoota, and Bing, and they’re mistaken for kids in Halloween costumes by the other trick or treaters, allowing them to pass through town unnoticed – and easily stock up on sweet, sweet coobi.

It doesn’t take long for Michael and Jeanie to make fast friends with the Martians, and while Jeanie depresses them with stories about her late mother, Michael makes the startling revelation that COOBI IS CANDY. Naturally, they take the animated aliens trick or treating when they realize that they’ve come to Earth for the sole purpose of collecting candy, as it is after all the absolute perfect night to do just that.

After one homeowner rips Romtu’s head off, thinking it’s merely a mask – don’t worry, he’s able to stick it right back onto his neck cause HE’S A FREAKIN’ ALIEN – Bing has a rather strange encounter with a young boy who is for whatever reason dressed as a woman. Obsessed with finding a mother after hearing Jeanie’s stories, Bing thinks the cross-dressing boy is a good fit, and creepily attacks him.

That’s CBS for ya. Tackling all the hot-button issues. 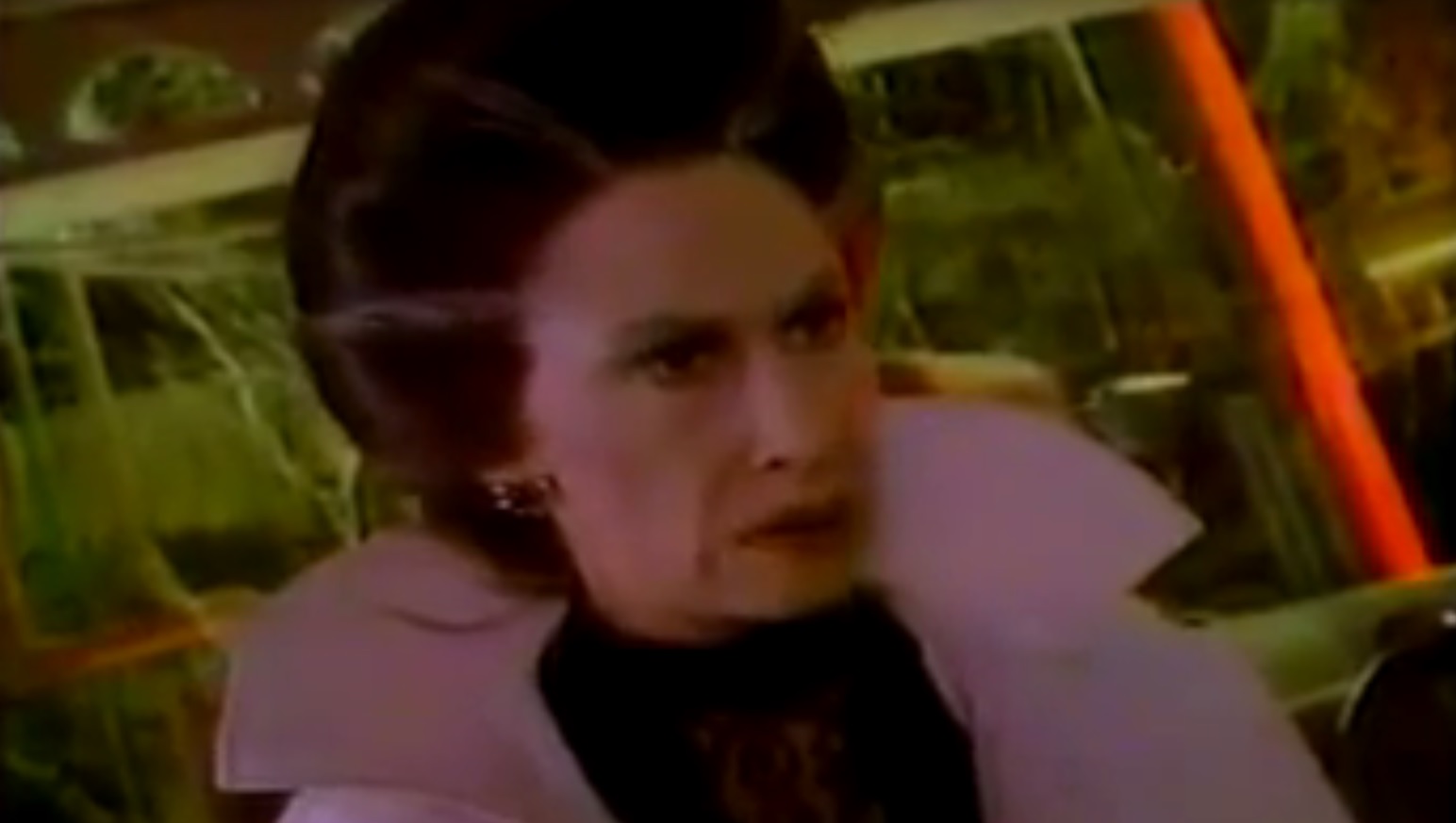 With all this craziness going on, Mrs. Gizbourne and her submissive assistant are oblivious to it all, sitting high atop the mountains in their gothic mansion and doing all sorts of villainous and unsavory things. Specifically, Gizbourne has discovered that the fountain of youth is found inside of insects, and she’s hell-bent on dissecting the little buggers in an attempt to forever preserve her devilish beauty.

Like a good assistant, Hans strokes his beard and does whatever Gizbourne says, presumably under the impression that his loyalty will someday lead to sexual intercourse (it won’t). We soon learn that Gizbourne, in an effort to create her magical bug juice elixir, is the one draining Crystal Lake – not THAT Crystal Lake, unfortunately – and she instructs Hans to venture into town and find the biggest, juiciest bug he can.

I’m sure you can see where this is going.

Halloween takes a turn for the worse when Bing is captured by Hans, leading Michael and Jeanie to storm the proverbial castle and try to get him back. They do so in quick fashion, saving the day and alerting their father to what is going on. While he heads off to get the sheriff, kids and Martians celebrate their triumph at the candy factory, where the Martians load up on what they came for – COOBI SNACKS!

All’s well that ends well, and all indeed ends well both for the aliens (who can now continue their quest to become fat diabetics) and the residents of Crystal Falls. Not only are Mrs. Gizbourne and Hans locked up, but a magical alien skipping stone returns all the water to Crystal Lake, thereby saving the candy factory. But perhaps most importantly, the whole ordeal leads Jeanie to do some healthy growing up. 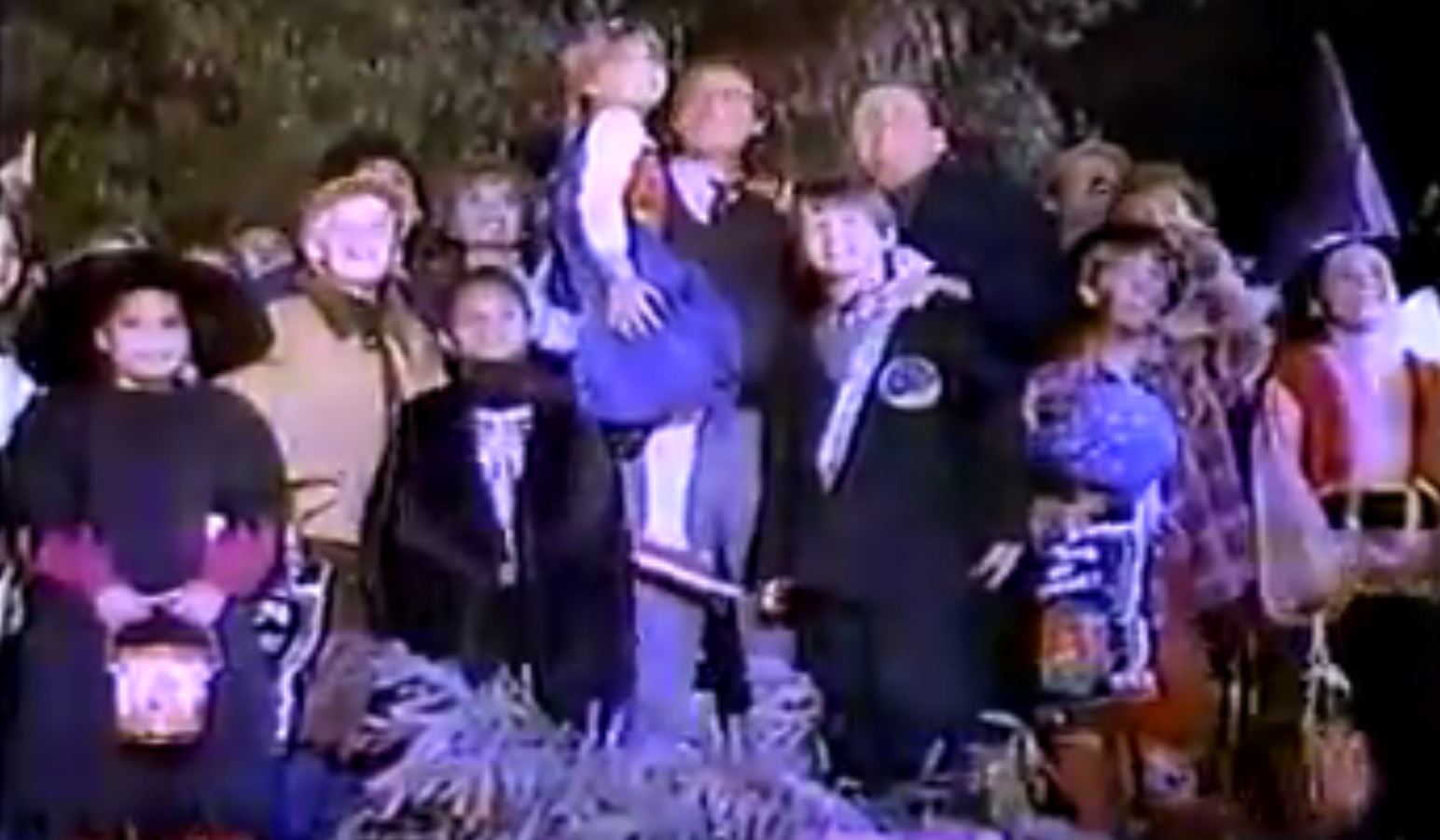 When Bing comes to the realization that the little girl is the mommy he’s been looking for – it oddly makes sense, at least in the context of the program – Jeanie finally makes peace with her own mother’s passing, shedding her costume and embracing the fact that she isn’t a little kid anymore. She’s now a mother herself, and mothers don’t sit around pouting about their dead mothers. Sweet, isn’t it?

The Last Halloween ends with an uplifting message about the power of positivity and the healing magic that is childhood hope and innocence, as the narrator (William Hanna) notes that “it may be hard to find, but a place where magic still exists is waiting when you let yourself believe.” In other words, when shit starts to get rough, aliens just might show up, steal all your candy, and make life worth living again.

So hang in there, kids.

A coming-of-age story wrapped up in a strange tale of aliens and a lake-draining, bug juice-obsessed witch woman, The Last Halloween is easily one of the strangest and most nonsensical Halloween specials to ever hit the small screen, notable almost exclusively thanks to its award-winning visual effects. Nevertheless, it is fondly remembered by those who saw it back in 1991, if only cause NOSTALGIA RULES.

It’s interesting to note that Gleep, Romtu, Scoota, and Bing returned to the small screen a few years later, appearing as the mascots for the Mars candy company’s ‘Mission to Mars’ Halloween contest. It was a natural fit, given the characters were not only from Mars (the planet) but also obsessed with candy. Come to think of it, the whole special was probably one big candy commercial all along.

And really, isn’t that what Halloween is all about?