It’s often said that the TV series Roseanne was way ahead of its time, and the show’s many Halloween specials serve as a prime example of that. Airing in October of 1989, during the second season, Roseanne’s very first Halloween-themed episode was something that was practically unheard of on the small screen at the time, and the annual frights continued straight through the ninth and final season.

If you do the math, that equates to eight Roseanne Halloween episodes in total, which are cumulatively considered to be the very best Halloween specials of all time. While other shows were celebrating Christmas but ignoring Halloween, Roseanne was bucking trends and having a whole lot of spooky fun, and the Conner family’s celebrations still make for some of the finest October viewing you’ll find.

With October on the horizon and Fall now in full swing, today we shine the spotlight on my favorite costumes worn by the Conner family during those eight incredible Halloween specials. 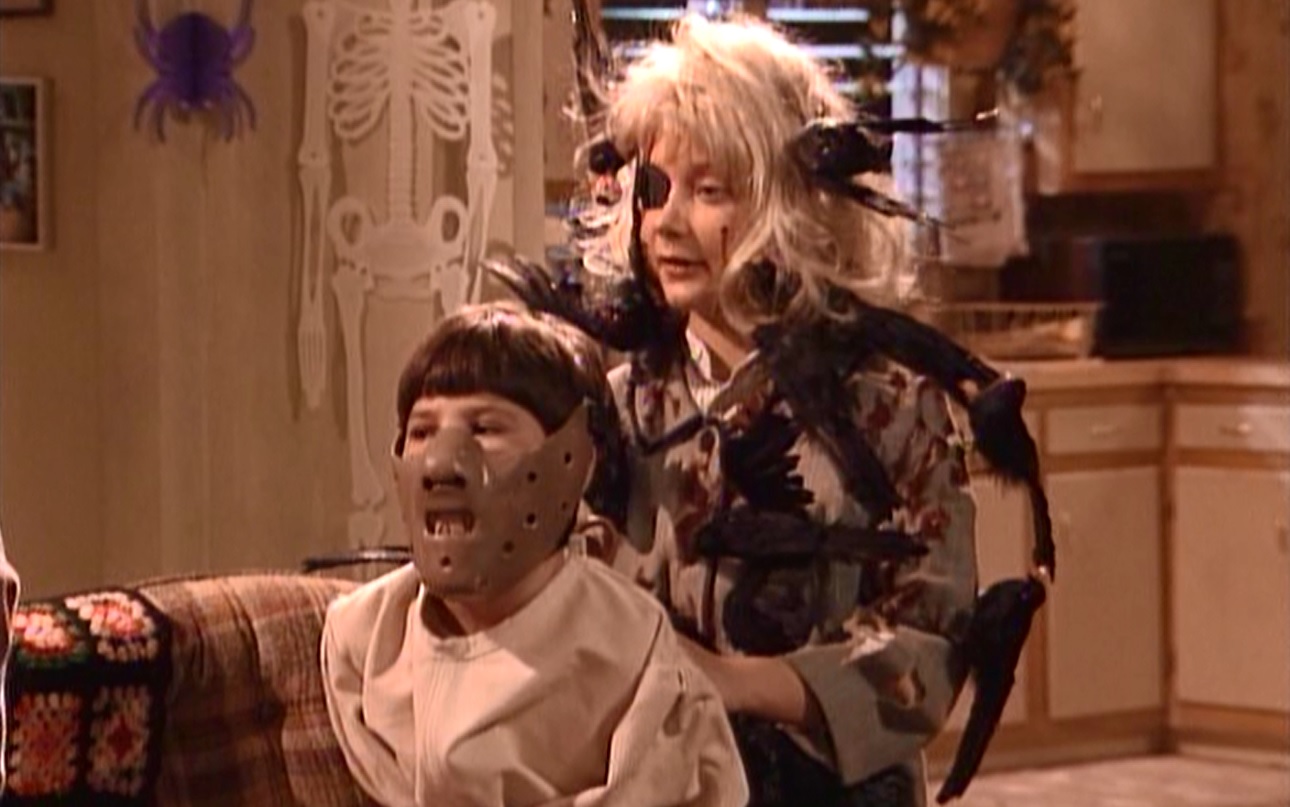 With her morbid sense of humor, it was only natural that Darlene was a big fan of Halloween, and she often went all out with some of the most gruesome costumes seen on the show. For Halloween 1989, she slapped on a bald cap and stuck arrows through her body, and the following year she utilized a pretty awesome rubber monster to replicate the chest-burster scene from Ridley Scott’s Alien.

But it was in 1992 that Darlene wore her hands-down best Halloween costume of them all, attending a party dressed as Melanie Daniels (as played by actress Tippi Hedren) from Alfred Hitchcock classic The Birds. With her eye plucked and birds stuck all over her body, Darlene nailed the looks years before it became a popular costume. As an added bonus, she wheeled around DJ that year, dressed as Hannibal Lecter. 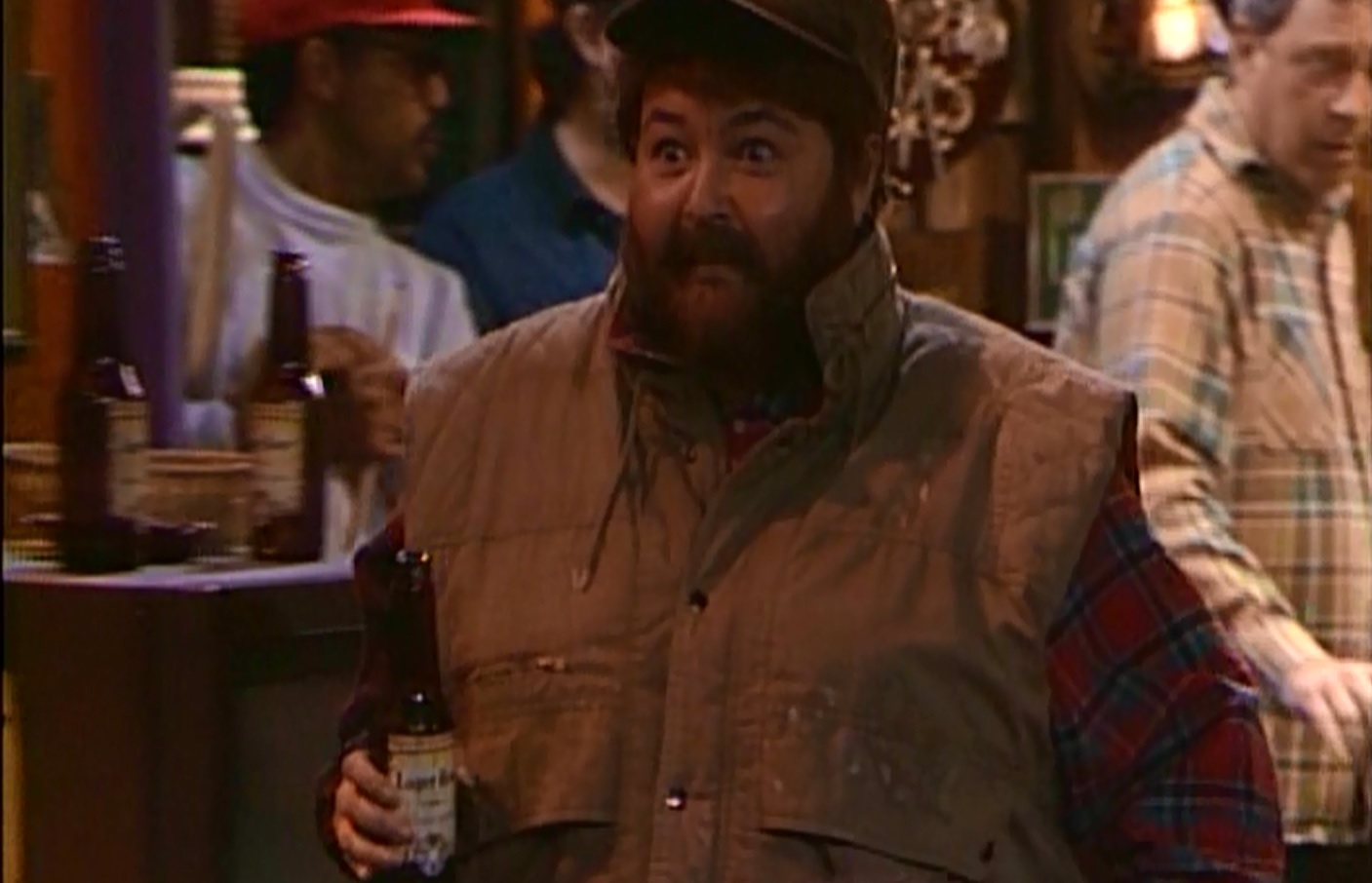 Season 3’s Halloween episode was loaded with great costumes, including Dan as Curly, Larry, and Mo from The Three Stooges, Becky as a mutilated prom date, and even Arnie (Tom Arnold) as Elvis’ ghost. But it was Roseanne herself who topped them all for Halloween 1990. While Dan and the kids attended a haunted attraction, Roseanne and Jackie hit up the Lobo Lounge, and Rosie was very well-disguised.

Wearing a flannel shirt, camouflage baseball cap, and a fake beard, Roseanne was fully decked out as a generic man’s man, and everyone in the bar mistook her for a dude – from the bartender to a group of pool-playing tough guys. In typical Roseanne fashion, she took the gimmick to the brink of its potential, playing the role to perfection and learning a whole lot of interesting things about the opposite sex.

Like, for example, that you NEVER talk while standing at a urinal. 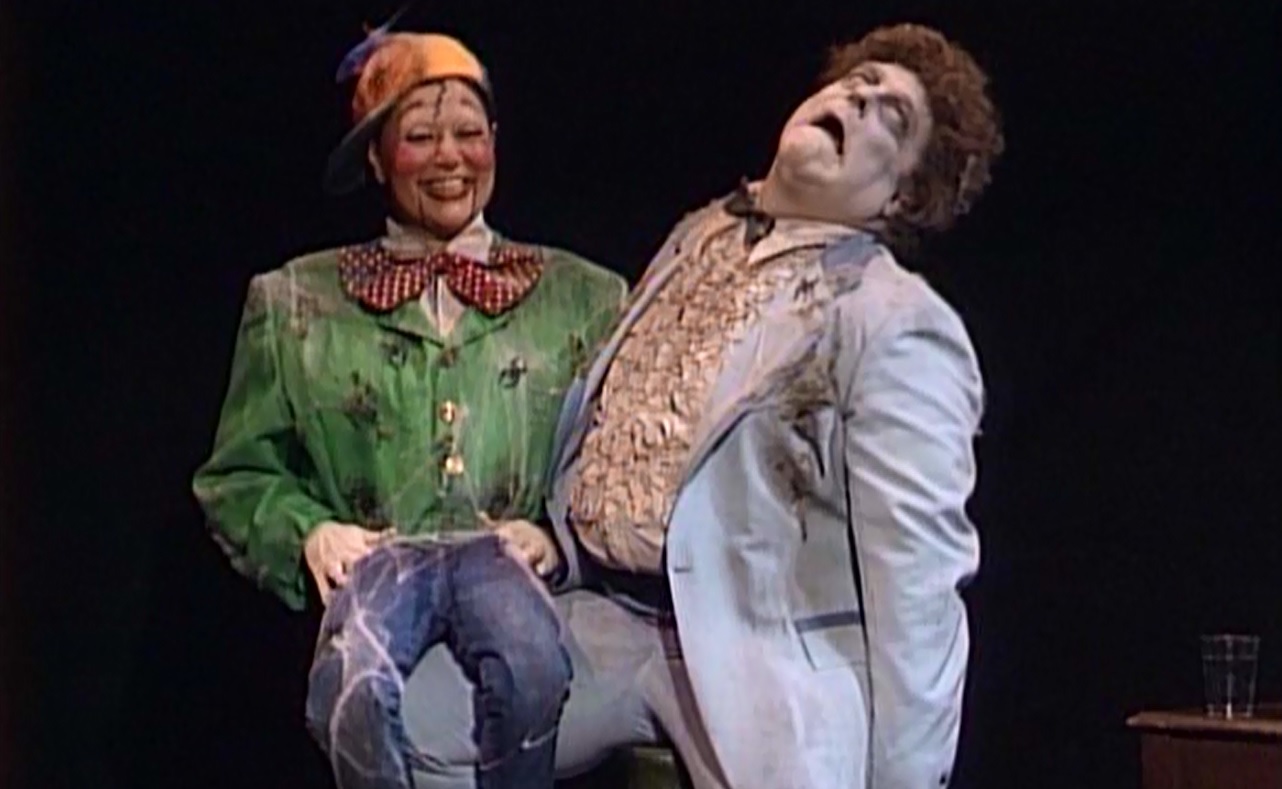 Dan and Roseanne spent Halloween night 1991 at the Lodge, which often played host to parties in the fictional town of Lanford. Not only did they whip up their most creative costume that year, but they also performed a stage show for the town’s fellow residents, billed under the names Deadgar Bergen and Mortuary Snerd – inspired by real life ventriloquist Edgar Bergen and his dummy, Mortimer Snerd. 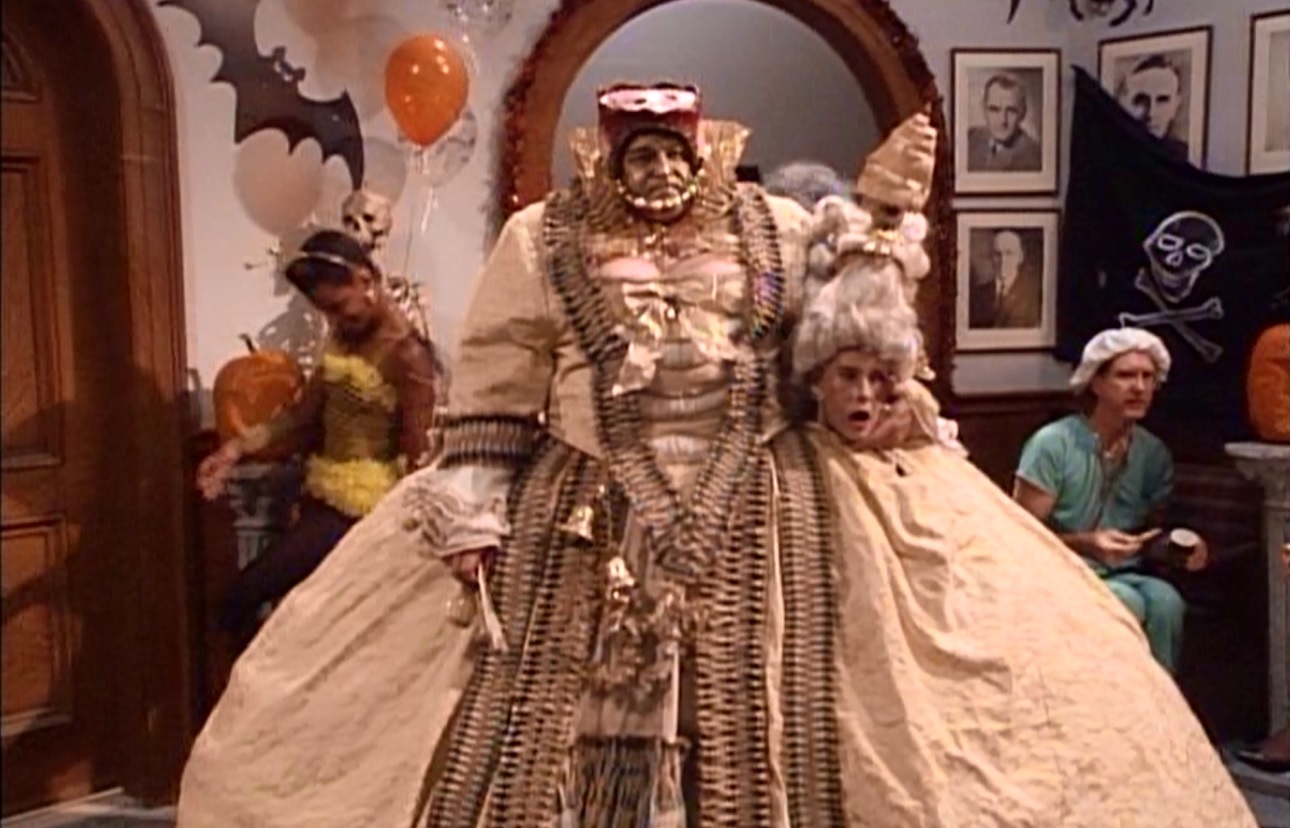 Season 5’s Halloween episode was somewhat of a sad one, as Roseanne found herself uncharacteristically unable to get into the Halloween spirit. She spent most of the episode being visited by the ghosts of Halloween past, present, and future, and it essentially played out like an All Hallows’ Eve version of A Christmas Carol. Thankfully, her spirit was eventually restored, and the holiday saved.

While Roseanne was sitting home moping, Dan and Jackie headed off to the Lodge together, and Dan once again proved that he’s the master of the two-person costume. For Halloween 1992, Dan dressed up as a decapitated Marie Antoinette, Jackie serving as the severed head he spent the night carrying around. Needless to say, it was the show’s most lavish costume, and Dan worked it like a champion. 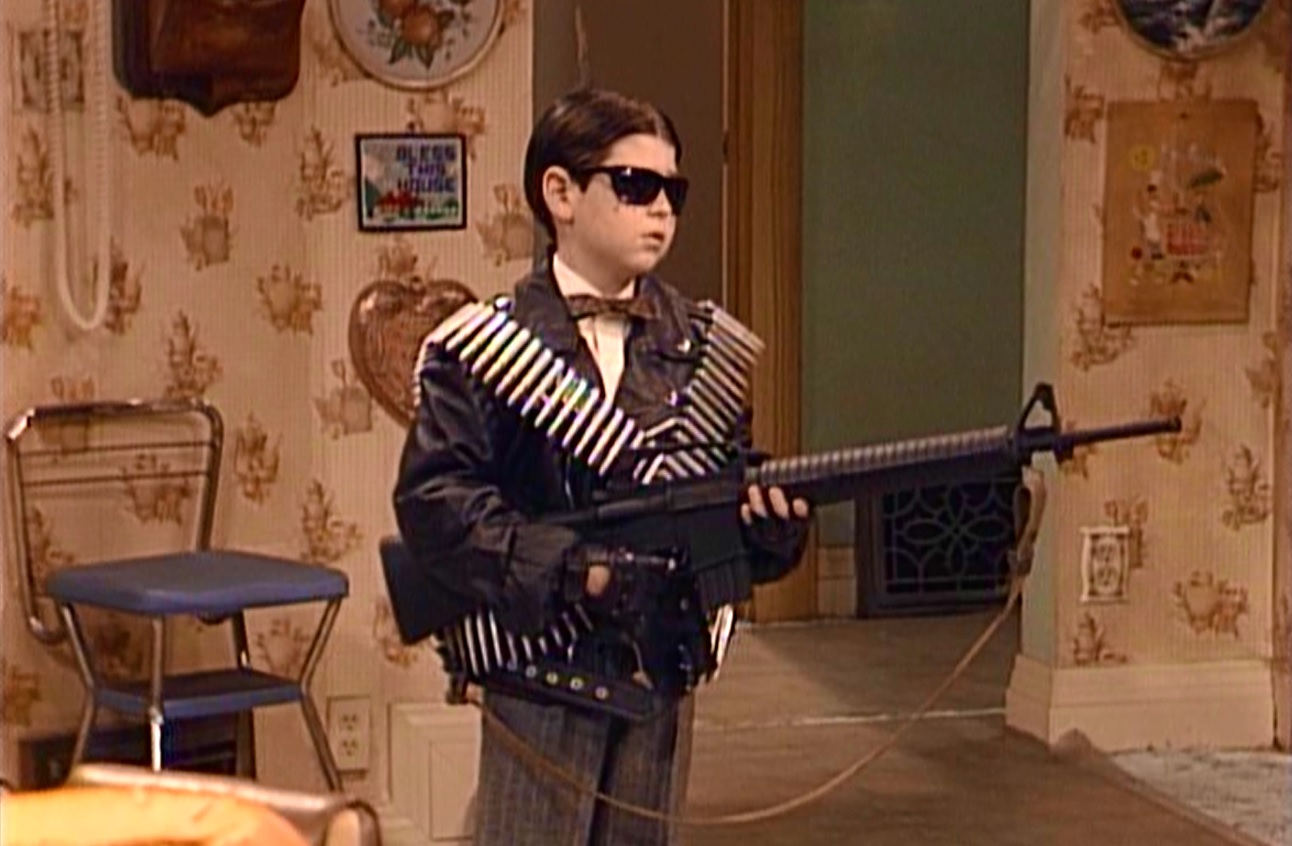 Mash-up Halloween costumes, and mash-ups in general, are pretty popular nowadays, so I suppose you could consider young DJ Conner somewhat of a pioneer for the costume he sported way back in 1991. Every kid reaches a point in their life where they don’t want to dress up as what mommy and daddy wants them to dress up as, and DJ very much reached that point in the fourth season’s Halloween episode.

Originally dressed as Alfalfa from The Little Rascals, per the request of Roseanne, DJ decided he wanted to be The Terminator instead. Despite Dan’s insistence that “Alfalfas kill Terminators,” and are therefore cooler, DJ took matters into his own hands and put a Terminator costume over his Alfalfa costume – becoming hybrid badass The Alfalfinator. A serious upgrade from the previous year’s male witch costume.

You may have noticed that all of these choices are from seasons three, four and five, which was when the show really hit its Halloween stride. Though the holiday hijinks between Dan and Roseanne continued, the kids had all grown up by the time season six came around, so the costumes weren’t as integral a part of the annual specials – though Jackie did dress up as Robin once, which was super cute.

On the small screen, Roseanne is still (and will likely forever be) the reigning queen of Halloween.