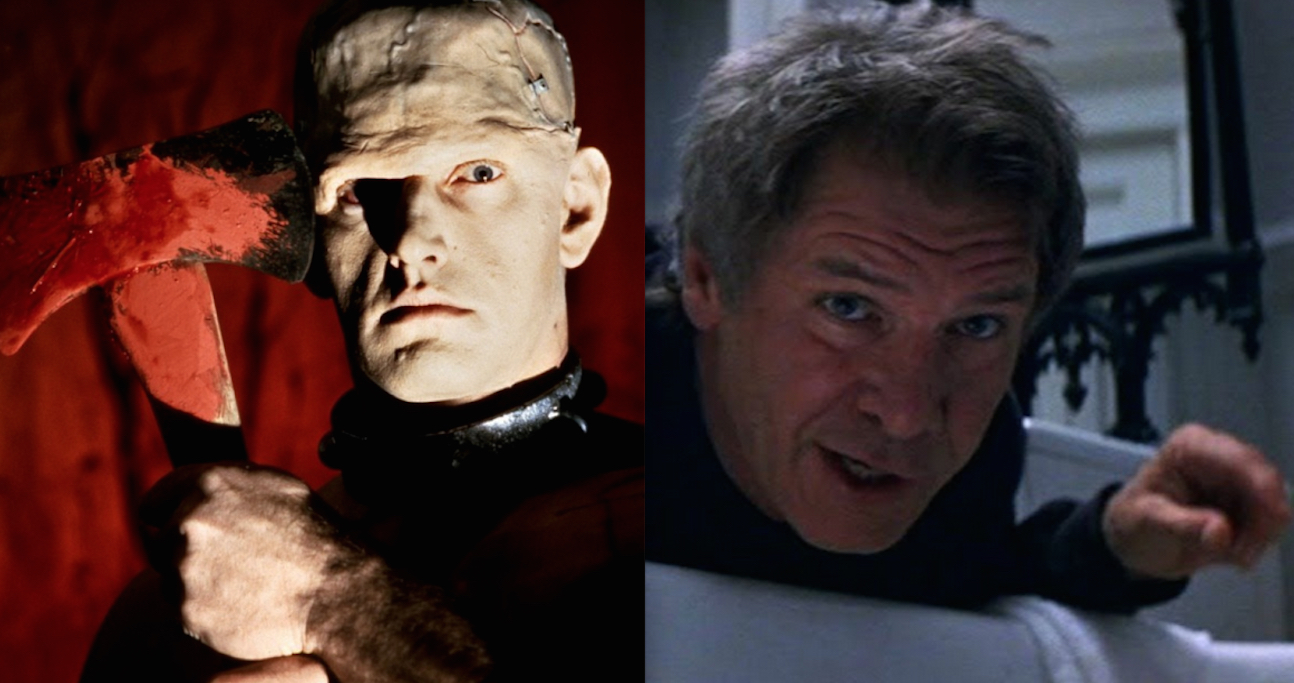 List all of the Star Wars cast members from the original trilogy and come up with a “horror” movie appearance for each of them.

The catch was that I could only name movies that I had personally watched at some point in my life! Now, I’ve seen a LOT of movies over the years – it’s unhealthy how many movies I’ve seen. So I confidently accepted the challenge and was doing VERY well until that bloody walking carpet Chewbacca let me down!

Mark caused me a few problems right away. There isn’t much in the way of horror that he’s been in, at least nothing much I’ve seen anyway. Obviously the man is an incredible voice actor, giving the Joker a memorable and very creepy voice for many years – he’s also been heard in Scooby-Doo cartoons multiple times! Do they count?? Ok, I’ll settle for his short appearance in this often forgotten 1992 Stephen King adaptation, which is probably forgotten for a good reason. Something about cats and virgins and horny teens and more cats and even dead cats! At least Hamill looks good in the uniform, and you’ve got to admire that face fluff!

This is Carrie Fisher in a Scream movie, playing a woman that looks like Carrie Fisher and is bitter about that because she auditioned for the role of Princess Leia but lost out to the real Carrie Fisher who, in the Scream universe, slept with George Lucas to get the part. You still with me?? It’s basically Fisher having some fun at her own expense and in the process delivering a memorable little cameo which she apparently improvised in several places. Now – if someone could just explain to me what the FUCK was going on with Courteney Cox’s hair and make-up in that movie I would be very grateful.

I have no idea if Guinness has been in anything else that could be loosely considered horror, but I HAVE seen him in this weird slasher/thriller and the story behind his very brief cameo is fascinating to say the least! SO, the movie was completed in 1994, but Guinness had actually filmed his scenes NINE years previously in 1985, when director Anthony Waller had bumped into him in Germany and decided to ask if he would read a few lines while being filmed, to create his cameo. Guinness agreed and didn’t even ask for any payment – he simply requested his name not be used in promotion for the picture. Years later his scenes are spliced together with the rest of the filming and BOOM, awesome appearance from Obi-Wan.

Grrrrrr, FAIL! I’ll be honest, I haven’t seen this, but it’s Chewbacca in a horror movie so I’ll include it here just in case any hardcore Wookiee lovers want to track it down and see Peter on screen without the suit.

David Prowse – The Horror of Frankenstein (1970)

Easy. The gentle giant from the south of England was hired for a couple of Hammer Horror movies, with my favorite being the crazy and camp The Horror Of Frankenstein. His version of the famous monster wasn’t particularly scary, and for some reason looked uncannily like a chubby and bald Christopher Lloyd – but like all Hammer movies it’s impossible to not to have a good time watching it. And if this production image is anything to go by – David had a good time making it as well! 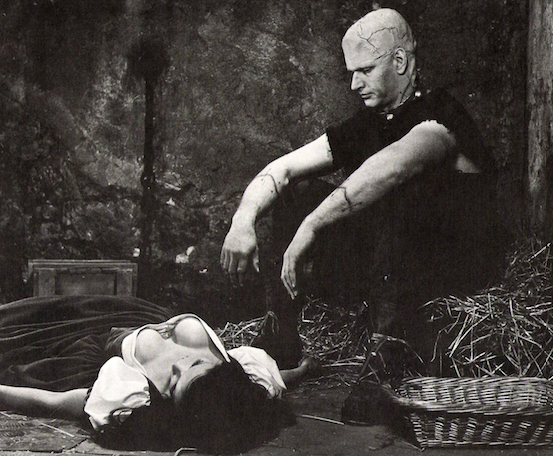 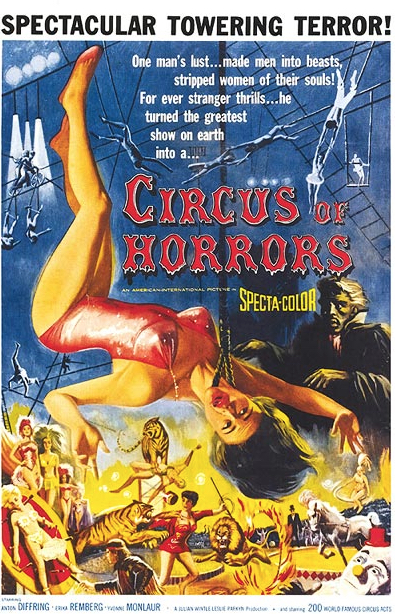 Little Kenny would keep himself amused during his long shifts within that most famous of robotic trash cans by taping pornographic pictures to the interior. And let’s face it, this was long before smartphones so the guy needed some form of entertainment between takes. But his journey toward convention appearances and that galaxy far, far away started in 1960 when he acted in this cheap and cheerful British horror movie. I KNOW I’ve seen it many years ago when I was a student, but don’t ask me what it’s about because I was probably drunk at the time. I’m guessing it involved a circus and horrors of some kind?

Ah, good old Fear Runs Silent, AKA “Billy Dee Williams and Stacy Keach needed a pay day” – This isn’t a great movie, but seeing Billy Dee always makes some warm and fuzzy childhood memories come flooding back. Lando was a terrific character, and in many ways symbolizes why Empire was such an incredible movie. He was a flawed, normal HUMAN character, with motives and actions that we could all relate to. ANYWAY, back on topic – Billy Dee gets to wear a big warm hat, shouts at some kids, and gets impaled by a spear. That’s all I can say about that.

Apparently this was supposed to be a horror comedy! Only problem is there is no comedy and very little horror. Daniels plays a priest who is asked to take a look at the vampiric bike and when he pushes it toward daylight the machine gets angry and chops off his fingers using the brake lever. Seriously. I can find the good in most movies but this monstrosity is hard to defend, especially when you once paid a rental fee for it!!

Lies, adultery, murder, more lies, cold bath water! Dr. Norman Spencer is not a very nice guy, but for the first hour or so of this surprisingly effective horror/thriller, you wouldn’t know it. By casting Ford and getting him to just BE Harrison Ford, director Robert Zemeckis made a very clever move. There is nothing in his performance that suggests he is a character we should be worried about – then secrets are revealed and the shit REALLY hits the fan. The whole ‘paralyzed in the bathtub’ scene is terrifyingly brilliant and for the first time I looked at my ultimate childhood hero in a different light. What would Chewie say?!

To select one single performance from Peter Cushing’s remarkable career would be like selecting a child you prefer more than another. So I finish this challenge by cheating – and will simply say that Cushing was an actor and a gentleman the like of which we may never see again.

“I don’t want to sound gloomy, but, at some point of your lives, every one of you will notice that you have in your life one person, one friend whom you love and care for very much. That person is so close to you that you are able to share some things only with him. For example, you can call that friend, and from the very first maniacal laugh or some other joke you will know who is at the other end of that line. We used to do that with him so often. And then when that person is gone, there will be nothing like that in your life ever again.” 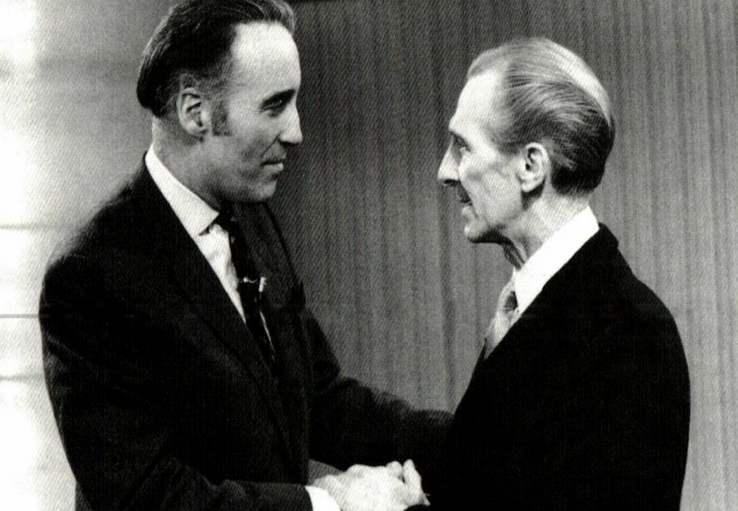