“Swallow your tongue, or I will.” She found herself uttering to a reckless man in the middle of a bakery, of all places. The smell of sweet bread and sugared pastries lingered in the air around them, trickling into her nostrils and down her throat, and weaving their way between her abrasive, jagged teeth. She flicked a snake-like tongue across her lips and tasted the air around them — the dust, the pastries, and the man who stood before her, a smug look settled delicately on his face like grime on the counter. She reveled in the smells, a dog in a world of a thousand unique scents telling a thousand different stories. Every passing day was this experience for her. She reveled in it.

Such careless and vile threats were rarely met with obedience and submission. Instead, they often evoked reciprocated reactions. She saw the contours of his face twist before he spoke, and felt the insult slip from his lips before he said it. The exact words were muddled to her, but a variety of colorful phrases brought about their meaning, instead, which was clear as day. She drew her upper lip toward her nose, baring a set of teeth that would make even the most adamant of hearts skip a beat. She felt people grow still around the tavern. She listened to his heart first slow, then quicken in pace. She felt his eyes land upon her pearly whites. 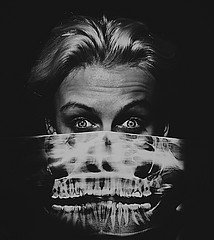 The next few moments were a shocking blur, both for herself, and for anybody unfortunate enough to be watching. Her first sensation was that of the fury ebbing, a glee slowly filling her instead. This glee was followed by a thundering sound, and various transactions and conversations came to a half about them, fueling the silence that her head rush contributed to. His scent grew stronger; the smell of fear cascaded from him like shelled nuts, piling up on the floor at his feet. In the next instant, she found her mouth pressed against his. While he squirmed in her grasp, escape was futile; he’d been slammed against the side of a refrigerator, and was sandwiched in between her and the cold metal behind him.

She found herself enraptured in the heat of the moment. Her eyes drifted closed, plunging her into comforting darkness and putting a spotlight on the smell and taste of the man before her. Nothing else could be heard but the sound of the blood pounding through her. Nothing was felt save their tongues meeting and colliding. Even when a pair of hands, then two, wrapped around her arms and pulled her away, she focused on his taste, ignoring the hard metal clasped around her wrists and the distant sensation that she was being led from him.

Behind her, two officers stood over the bleeding man, uncertainly responding to the situation at hand. His face was covered by two palms, and when one of the officers drew it away, blood was smeared across his mutilated lips. He reeled from the experience, letting out a horrified cry — then two. His cries were guttural and strained, and he frantically tried not to choke on his own blood.

Lying at his feet was a small pink circle of flesh, and an instant before he passed out, he recognized his own tongue before him.