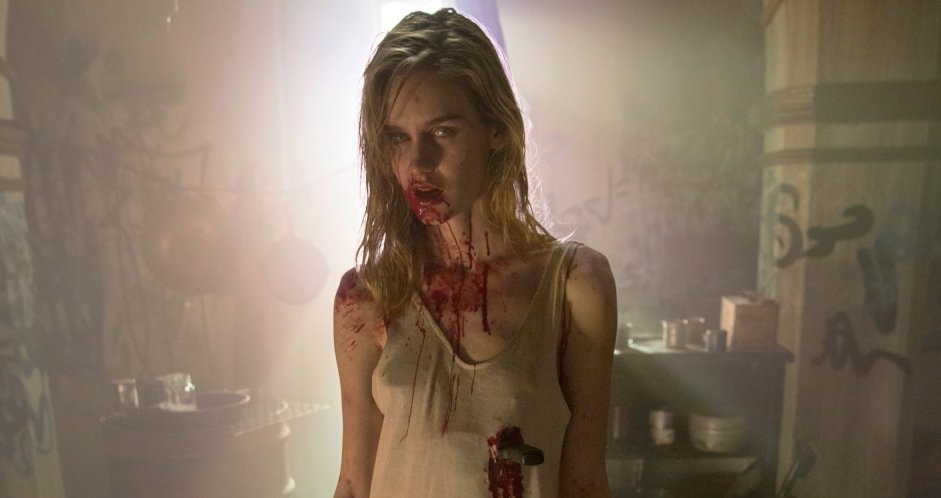 Ever since its premiere back in 2010, the main complaint about The Walking Dead has been that there’s too much of a focus on the characters and their human drama, and not enough on the zombies. How does the network respond to this criticism? In an admirably ballsy move, by launching a spinoff series that begins in the days immediately prior to the apocalypse – before the zombies took over the Earth.

Of course, it’s ironically the human drama that has made The Walking Dead such a hit with viewers, and if the premiere episode of newborn show Fear the Walking Dead is any indication, it’s going to follow in the footsteps of its mega-successful parent. The first of six episodes in Season 1 kicked off this past Sunday night, with the idea being that the spinoff will hold us over until the main show returns in October.

In the debut episode’s suitably intense opening sequence, which evokes the spirit of 28 Days Later, we meet Nick Clark, a drug addict who wakes up in an abandoned church and finds a female friend eating the face of another druggie. Frantically fleeing the scene, Nick is hit by a car and brought to the local hospital, where he finds himself wondering if what he witnessed was real or a side effect of his nasty habits.

At the hospital we’re introduced to Nick’s family, consisting of no-nonsense mother Madison, a school guidance counselor; sister Alicia; and step-dad Travis Manawa – who has a teenage son of his own. It’s clear right off the bat that the blended family is quite dysfunctional, and Nick’s drug abuse is the source of much of their problems – taking a particular toll on Alicia, who just wants to get away from it all.

Unlike The Walking Dead, which takes place in Georgia, Fear the Walking Dead is set in Los Angeles, and the series exists primarily to show us some of the things that went down in the world before Rick Grimes woke up in a hospital bed and discovered that the undead had brutally inherited the Earth. But this show isn’t about Grimes and friends, despite the fact that they inhabit the same world on display in it.

We’re in the very early stages of the zombie apocalypse as the pilot begins, and though we know precisely what is going on – after all, we’ve been watching The Walking Dead for many years now – the characters do not. Nick is mildly convinced that what he saw wasn’t a delusion and Madison is outright told by a student that an infection is spreading, but nobody truly knows that the dead are about to rise up.

This piece of information that only we’re privy to makes Fear the Walking Dead‘s pilot a fairly compelling one, as there’s an atmosphere of dread the characters are unable to sense. Throughout the first half of the episode, Nick is strapped down to his hospital bed while an old man next to him is clearly on his last legs, and it’s pretty damn creepy because we know what’s coming next – we just don’t know WHEN it’s coming.

Similarly, there’s a moment where Madison approaches the school principal from behind, slumped over in his chair and appearing to be dead. She cautiously walks toward him, and while she’s likely fearing that the man has merely had a heart attack or something of that sort, we are on the edges of our seats just waiting for him to turn around and reveal himself to be a hungry member of the undead.

The shit hits the fan when footage surfaces of a gruesome incident on the freeway, wherein a man appears to rise from the dead and starts munching on the neck of a paramedic. Cops shoot him several times, but he doesn’t go down until one of the bullets is planted in his brain. It’s at this point that nobody can deny something is very wrong, though they still don’t know the severity of the situation.

Fear the Walking Dead‘s 90-minute pilot episode is at its most engaging when these early symptoms of the apocalypse are being teased, and the concept of the show inherently helps ground it in a bit more reality than The Walking Dead. The events of the episode feel true to the way this sort of thing would go down in the real world, and the characters react to those strange happenings in a very realistic way.

The one thing that will determine whether or not Fear the Walking Dead is worthy of its namesake will be our connection to the characters, which is impossible to comment on after only the first episode. It took a long time for us to develop strong connections to Rick, Daryl, and the gang, and though it’s hard to imagine ever caring about these new characters as much, that could very well come with time.

Fear the Walking Dead is thankfully blessed with a talented cast that includes Kim Dickens as Madison and Cliff Curtis as Travis, though the standout performance in the pilot episode comes courtesy of young actor Frank Dillane. As tweaker Nick Clark, Dillane is absolutely fantastic, and the character’s struggle with drugs works really well in tandem with the impending threat – it borders on metaphor, at times.

The episode ends with definitive proof that death is no longer the end, as the disjointed Clark family is forced to come together when they’re attacked by Nick’s undead drug dealer – this being a prequel story and all, he’s decidedly ‘fresher’ looking than the main show’s gnarly monsters. The pilot leaves us with the promise that much more zombie action is in the near future of those of us who stick with the show.

There are undeniably many strains of The Walking Dead‘s DNA present within Fear the Walking Dead, but the spinoff immediately feels fresh due to its different setting and focus on the humble beginnings of that apocalypse. With a strong pilot, it’s shaping up to be a nice companion piece for hardcore fans of AMC’s ratings juggernaut, shedding some light on a different aspect of the show’s overall universe.

And AMC is smart to inject the new series into their late-summer lineup, as it arrives in perfect time to get us excited about the return of The Walking Dead, filling those agonizing final months before the Season 6 debut with six and a half hours of similar but uniquely different programming. It’s total fan service in many ways, even if one could (rightly) argue that it’s fan service driven by the desire to cash-in.

Shared universes are the big thing in the entertainment industry right now, and with Fear the Walking Dead, Robert Kirkman’s flesh-hungry creation becomes a bona fide world unto itself. And even if it doesn’t fill the massive shoes worn by The Walking Dead, that’s quite alright. Because all it really needs to do is provide some weekly entertainment while we wait for what we really want – an appetizer for the main course, if you will.

I call this one a win-win situation for us all.