It’s time once again to take a look at the coolest horror images I’ve stumbled across on the internet in the past week. So let’s get right to it, shall we?! 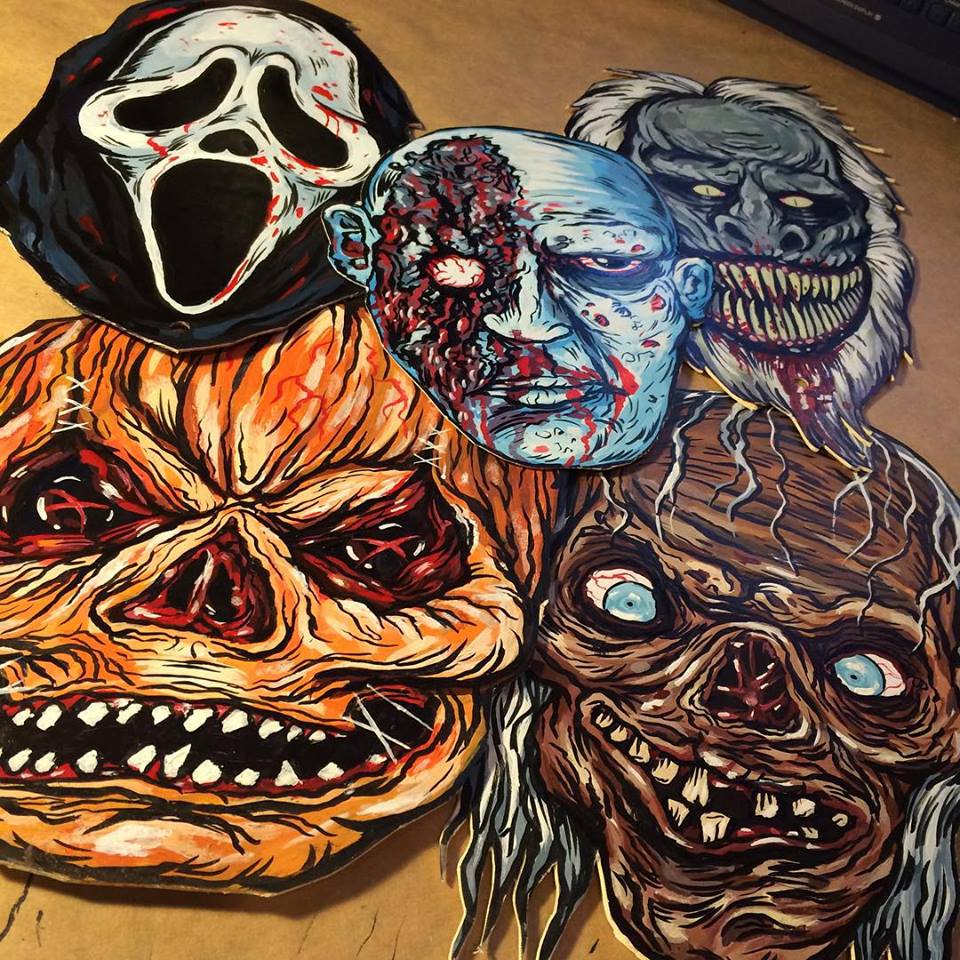 Last year, Canadian artist Trevor Henderson started making vintage-style jointed Halloween decorations depicting horror icons, and he created a slew of fan-favorite characters including Freddy, Jason, Michael Myers, and even the little demons from The Gate. This Halloween season, several brand new Horror Hangers will be hitting Henderson’s Etsy shop, and above is a sneak peek of characters like Sam, Fluffy, and Dawn of the Dead‘s ‘Plaid Shirt Zombie.’ While we wait, you can grab a sticker set featuring the new characters right now. 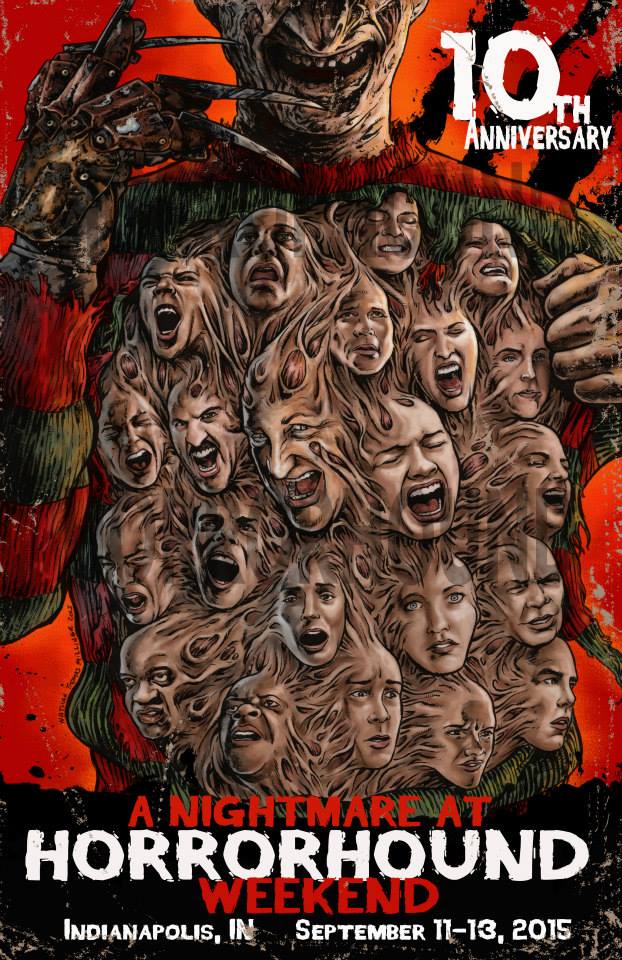 Indiana’s HorrorHound Weekend convention celebrates its 10th anniversary this coming September, and the guest list is absolutely loaded with stars from the Nightmare on Elm Street franchise. Robert Englund, Heather Langenkamp, and all of your favorite Dream Warriors will be there, and artist Nathan Thomas Milliner whipped up this incredible poster in celebration of the massive franchise reunion. See how many of those faces you can recognize, and head over to HorrorHound’s website for all the con details. 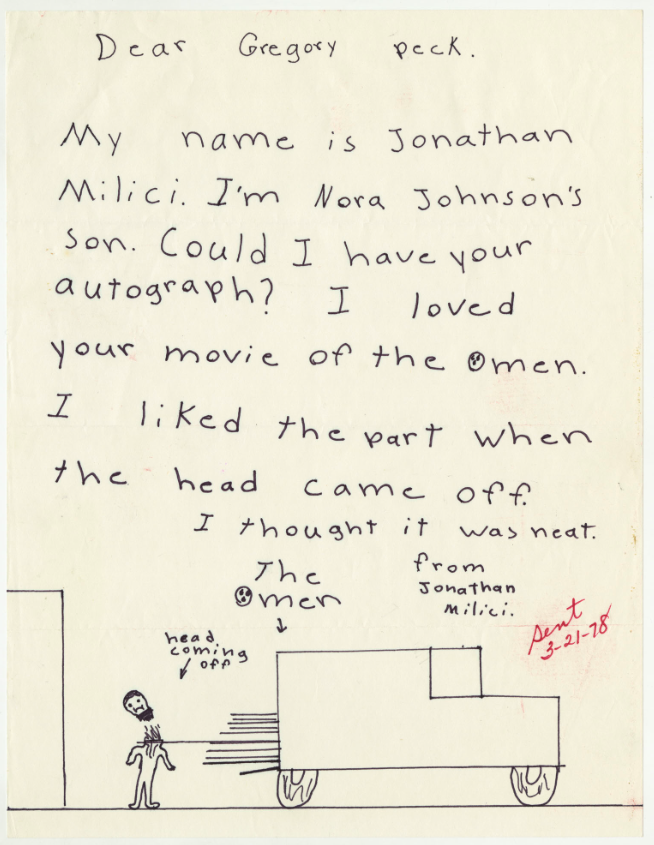 Now here’s something incredibly amusing. This is a letter a young fan sent to actor Gregory Peck back in 1976, the year that horror classic The Omen was released. In one of the film’s most memorable scenes, a man is decapitated after a sheet of glass slides off the back of a truck, and apparently young Jonathan Milici was a big fan of the gruesome effect. You and me both, Jonathan. Not just one of the best decapitations, but easily one of the best horror movie death scenes of all time. Hope it didn’t scar Jonathan too much. 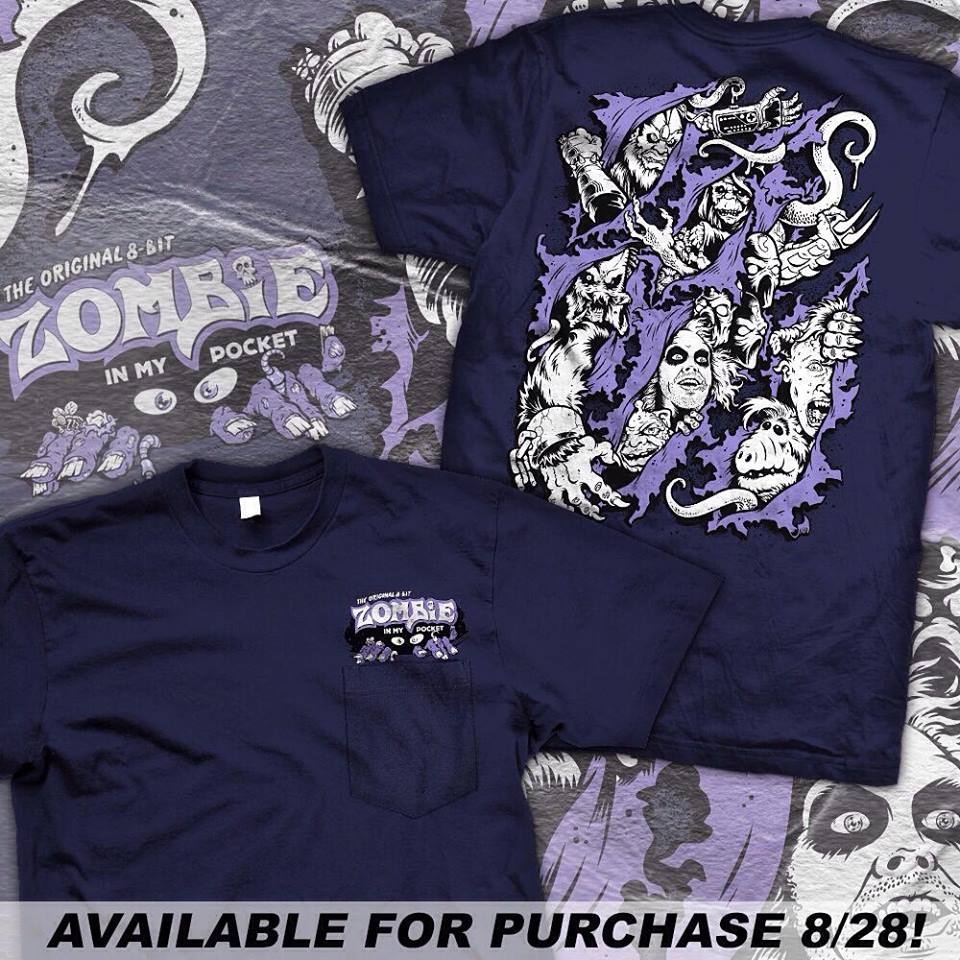 T-shirt company 8-Bit Zombie is putting out a brand new line on August 28th, and easily the standout highlight is this shirt inspired by the Monster In My Pocket toy line of the 90s. The shirt features 80s pop culture monsters rather than characters from the line, including Beetlejuice, Predator, My Pet Monster, a Boglin, and Maurice from Little Monsters. Best of all, it’s a pocket tee, so you can bring your favorite MIMP toys with you wherever you go. Because who the hell wants to grow up anyway?! 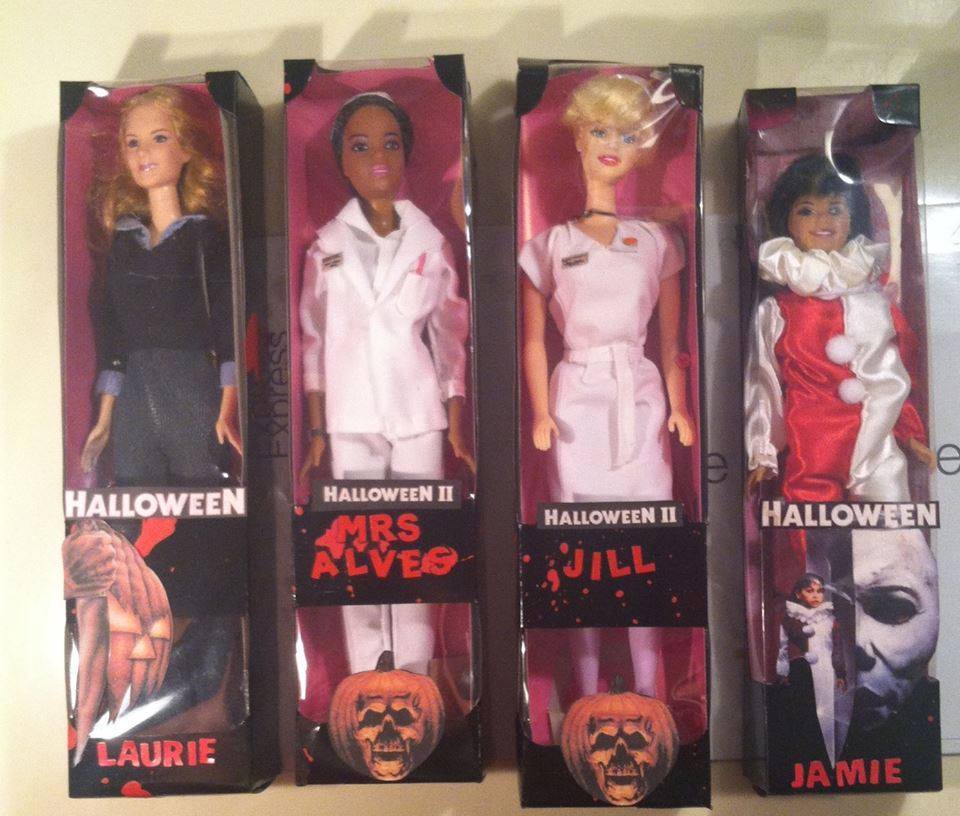 Endless Halloween toys have come out over the years, though Dr. Loomis is to date the only character other than Michael Myers who has been immortalized in plastic. That’s a huge bummer, considering characters like Laurie Strode and Jamie Lloyd deserve toys of their own. Filling in the blanks left behind by the companies who have held the license, customizer Jada Crockrell took it upon herself to whip up these Barbie dolls of Laurie, Jamie, and even two of the nurses from Halloween 2. I’m thinking these should be mass-produced. 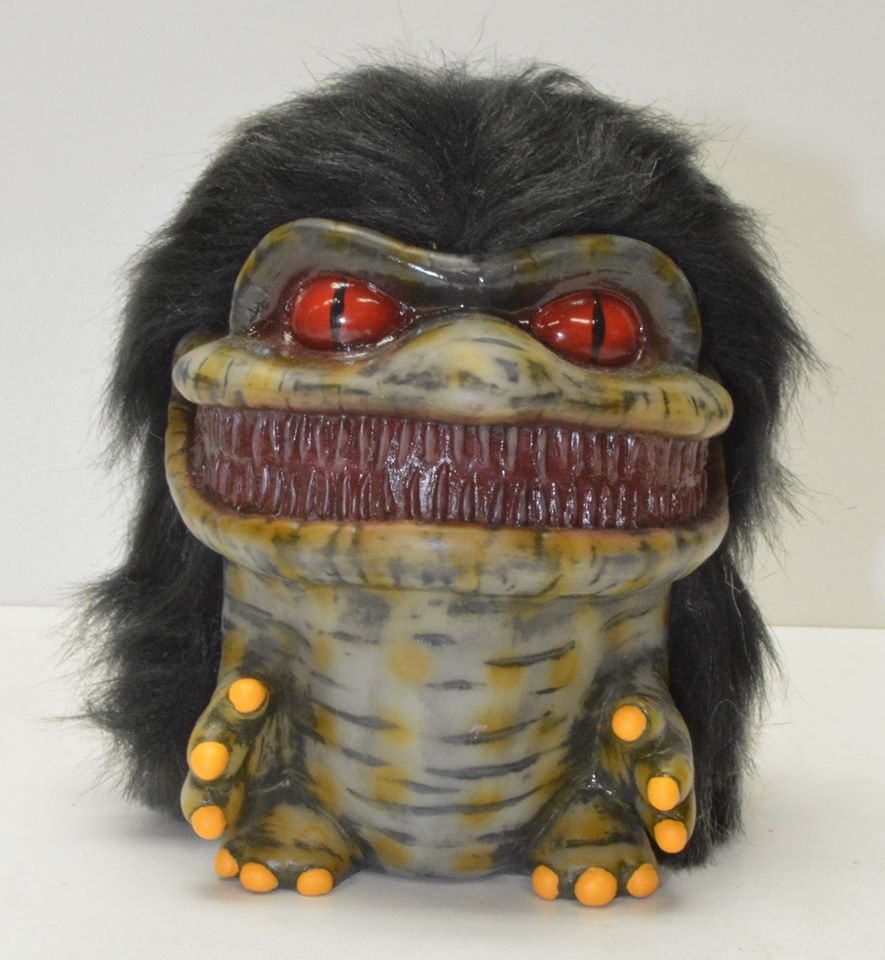 Taking a page out of Funko’s playbook, toy company Amok Time just put out these adorable Critters vinyl figures, which measure 5″ tall and feature real fur. You won’t find many Critters collectibles out there, nor was Funko likely to ever add the film to their POP! line, so these are pretty damn unexpected and special. They come housed in display boxes featuring artwork from the movie and, best of all, are selling for only $20 – with free shipping. Can’t beat that, so don’t miss out. 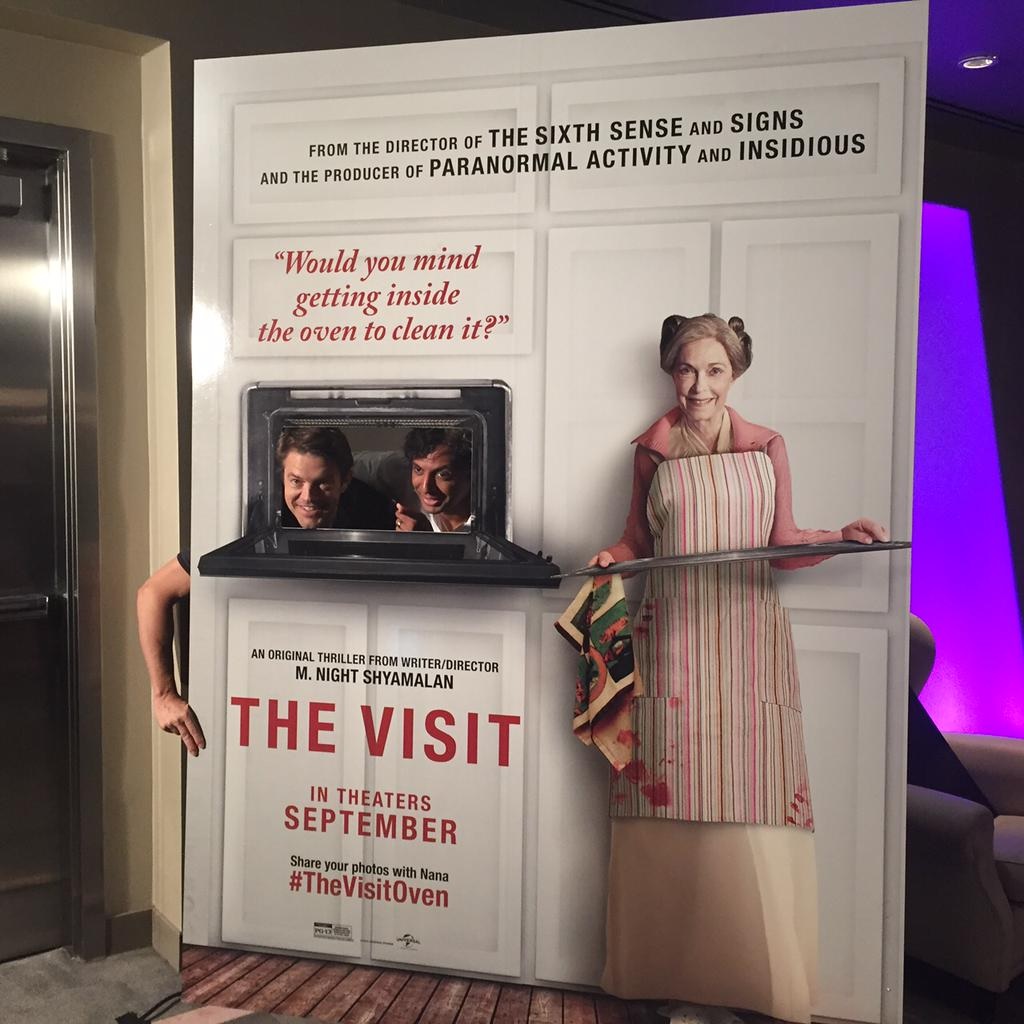 M. Night Shyamalan returns to horror this year with The Visit, hitting theaters on September 11th. Looking a bit like The Taking of Deborah Logan, the movie centers on two young children spending the weekend at their grandmother’s house, quickly realizing that something isn’t quite right with grandma. Keep your eyes peeled at your local theater for this promotional standee, which allows you and your friends to recreate the creepy “get in the oven” scene from the trailer. That’s Shyamalan and producer Jason Blum stuffed into the oven! 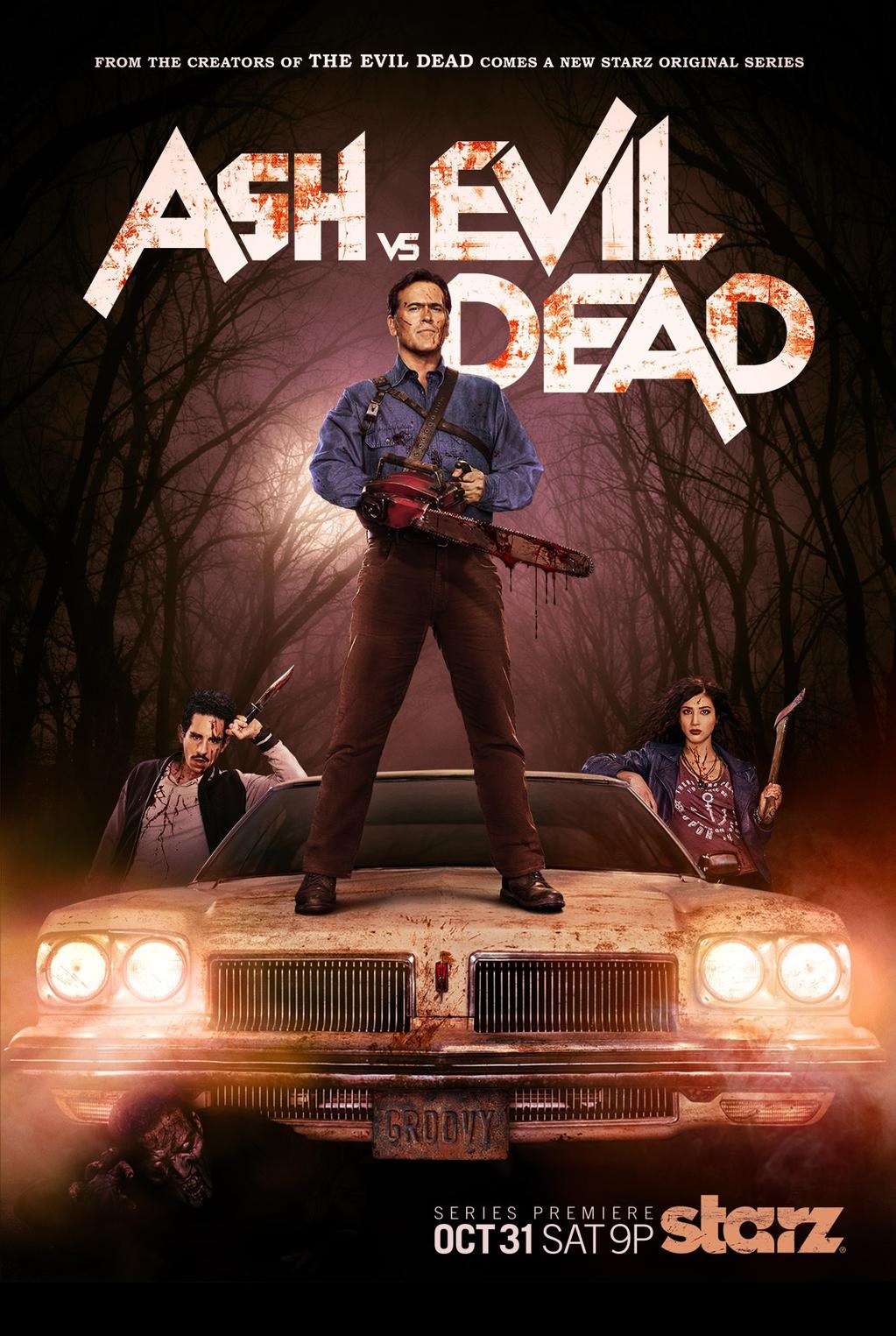 Nothing happening this year is more exciting than the premiere of Starz’ Ash vs. Evil Dead, taking place on Halloween night. Bruce Campbell reprises the role of Ash Williams for the 10 episode series, which will serve as a decades-later sequel to the original film franchise. This poster was unveiled last week, showing Bruce standing tall atop his trademark Oldsmobile – flanked by his two Deadite-slaying partners. This is really happening, guys. It’s really happening.