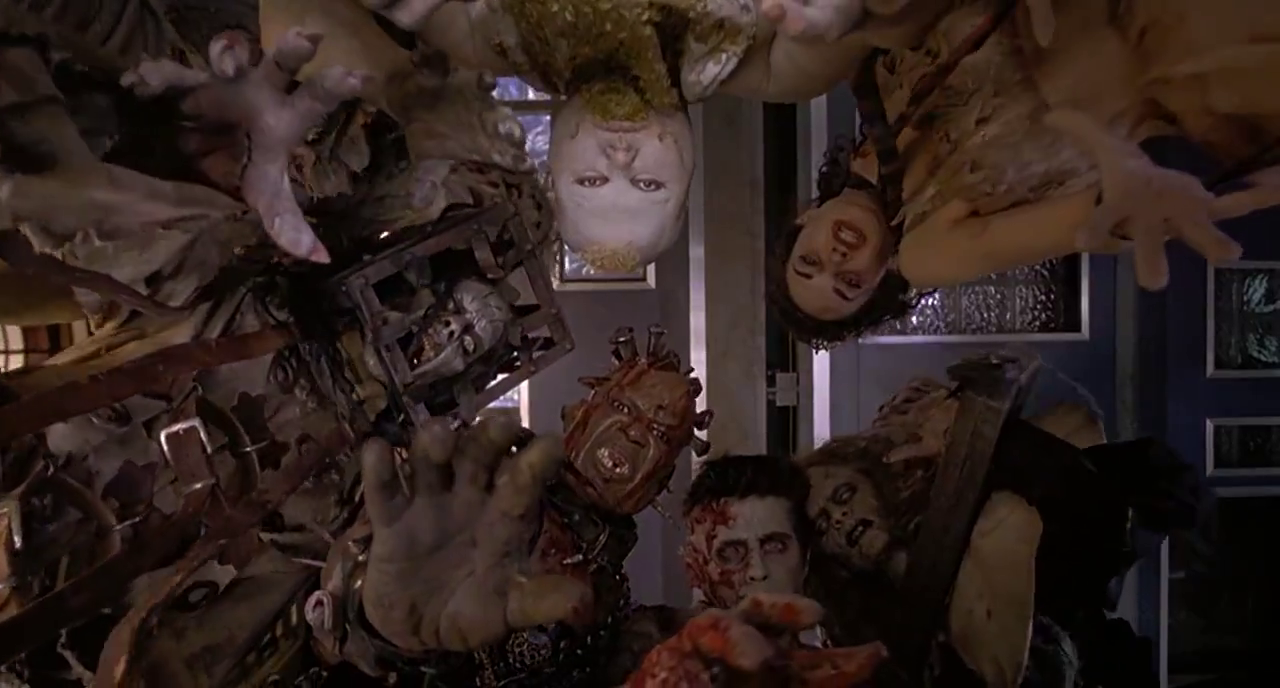 We open on a creepy junkyard. We’re told that some sort of malevolent entity calls the location home, and it appears that a mysterious man is attempting to stuff the monster into a glass box and use him for his own mischievous purposes. We have no idea who this man is or really what the hell is even happening, but there’s enough death and destruction going on that it’s almost impossible to care.

From there we meet Arthur and his family, consisting of daughter Kathy and son Robert – plus ever-present nanny, Maggie. It appears Arthur’s wife has recently died in a tragic fire, though it’s again hard to grab hold of the information we’re confusingly being fed. As it turns out, the ill-fated man from the opening sequence was Arthur’s uncle Cyrus, and his will dictates that Arthur is now owner of his estate.

On the property, miles away from the rest of civilization, sits a mansion made almost entirely of glass, with Latin words etched into the walls and floors. Exposition clarifies that Cyrus spent his life collecting the spirits of twelve evil beings, and it’s not long before we realize that they’re housed in the mansion’s basement. The strange structure, which seems to be alive, starts releasing them one by one.

Hitting theaters in 2001, Thirteen Ghosts is of course a remake of the 1960 classic 13 Ghosts, which was directed by legendary showman William Castle. It was the second film produced by Dark Castle Entertainment, a company whose purpose – at least in the beginning – was to remake Castle’s movies for modern times. Steve Beck sat in the director’s chair for the film, which took Castle’s concept and went crazy with it.

One could argue that Thirteen Ghosts, like much of Dark Castle’s early output, is a bad horror film, coming along at a time when horror films were, well, not so great. With a serious lack of character development, a needlessly muddled story, and spastic editing that reflects one of the most nauseating trends of the time in which it was made, this updated monster mash is admittedly a bona fide mess.

But the beauty of Thirteen Ghosts is that it’s a hot mess, embodying Google’s definition of the term: “A person or thing that is spectacularly unsuccessful or disordered.” Though it may leave much to be desired in the character and story departments, Beck’s remake trades in that pesky fluff for a boundless energy that this writer admires, playing out like a frantic assault of monsters and bloody mayhem.

It is of course the titular ‘ghosts’ that are the highlight of Thirteen Ghosts, as the film is home to some of the coolest horror movie monsters of the time. Created by KNB FX, the various monsters include a headless torso, a dude who looks like Pinhead on steroids, and a nude woman whose massive breasts gleefully dance up and down, and they all look like Spirit Halloween decorations come to horrifying life.

That last line, in case you couldn’t tell, was a HUGE compliment.

Thirteen Ghosts hit home video at a time when DVD was being pushed hard, and the film benefits from that fact by being loaded with bonus features. Of particular note is ‘Ghost Files,’ a featurette that delves into the origin stories of those monsters. It’s a wonderful companion to the movie, showcasing how much work was put into developing each ghost – sadly, none of those stories made it into the film itself.

When the original 13 Ghosts was released in theaters, Castle came up with the idea of ‘ghost viewers’ being handed out to members of the audience – allowing them to either see or not see the film’s various ghouls. In the remake, the ghost-viewing glasses are part of the storyline, as the characters themselves are only able to see the ghosts with special glasses on. It’s a fun little twist, and a loving homage to the late filmmaker.

Though Tony Shalhoub doesn’t get to do much as Arthur, the man tasked with saving his family from the haunted house, Matthew Lillard chews the scenery to a pulp in his show-stealing performance as Dennis – a psychic who helped Cyrus collect the ghosts. Playing it way over the top, just as he did a few years prior in Scream, Lillard infuses the film with some much needed life in the character department.

Another standout aspect of Thirteen Ghosts is the production design, which even Roger Ebert couldn’t help but praise in his otherwise scathing review. The film is primarily set in one location, and the glass house is truly a sight to behold. Like a giant version of the puzzle box from Hellraiser, the mansion is both a trap and a puzzle unto itself, outfitted with shifting glass panels and a sinister device in the basement.

As we come to realize, the ghosts were collected for the purpose of literally opening up the eye of Hell, and Arthur’s uncle has built in the basement a machine that will help accomplish that devious goal. It’s a totally bonkers expansion on William Castle’s simple mythology, and though the script fails to ever make all that much sense of it, it doesn’t really matter. Because it’s fun, and everything looks so damn cool.

The provocative idea of monsters being collected and housed inside a secure building is one that was executed with much more excellence over a decade later in The Cabin in the Woods, but Thirteen Ghosts is nevertheless an entertaining B-movie equipped with no shortage of its own charms. With some seriously cool monsters and one of the decade’s best death scenes, it’s schlocky horror fun at its finest.

And though Thirteen Ghosts doesn’t technically have anything to do with Halloween, it’s the sort of movie that makes for perfect viewing when the holiday is near. At the time of writing this we’re only two months away from the big day, so pick a night sometime soon and give this one a revisit. If you allow yourself to kick back and forgive its many flaws, you might be surprised by how much fun you have with it.