In celebration of Samhain, a lot of horrorphiles have turned to lining up epic lists of 31 horror films for all 31 days of October. I’ve never actually done this myself as, to be quite honest, I watch horror films all year long. However, with work and numerous other responsibilities getting in the way, I haven’t been able to watch as many films as I would like to. This Halloween season, I’m changing that. I’m going to take on the challenge and watch at least one horror film every day this month. Doing things a bit differently, I’ve decided to give each day of the week a specific theme. – Re-posted from the original article.

Week #1 is dead and gone, and I made it – seven films in seven days! Okay, I’m not going to lie. I cheated a bit. I might have missed one day and had to do a double feature the next to catch up, but I was still able to sit through and enjoy (well, maybe “enjoy” isn’t the right word for one of these selections) all seven features. So what did I choose to watch? 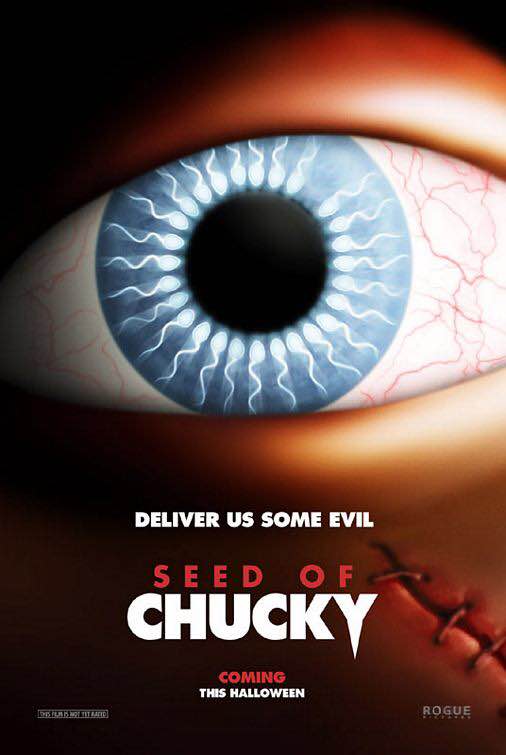 I already wrote last weekend about one of the reasons I love Seed of Chucky, but there is so much more to dig into here: the way the film deals with addiction, family dynamics, and our celebrity obsessed culture.

But beyond all that hoity-toity stuff, the film is freaking hilarious and over the top gory. The scene where puppeteer, Tony Gardner (playing himself), is decapitated and Chucky and Tiffany meet in the midst of the blood raining from his stump to kiss, is pure gold. Tiffany working her way through the 12 Steps program in order to “quit” killing lends itself to numerous laugh out loud moments. If you haven’t checked this out since its initial release, give it another shot! Forget any preconceived notion or expectation of what a Chucky film should be, sit down with an alcoholic beverage of your choice, a few friends, and prepare to have fun. 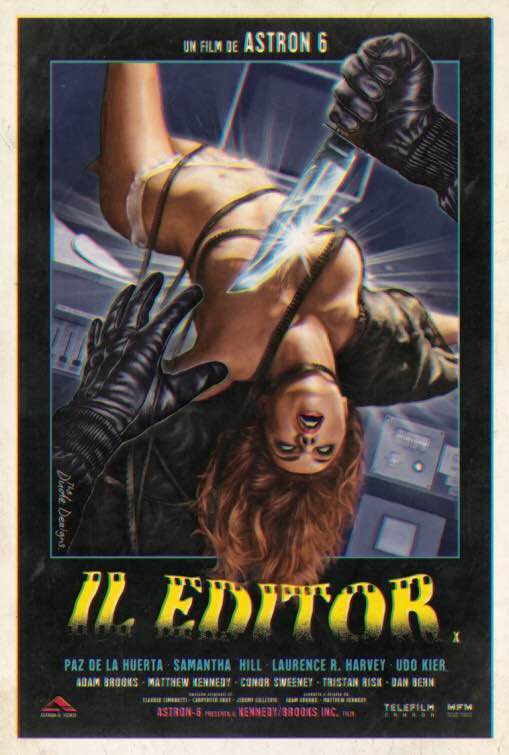 The Editor is a full tilt spoof of Italian giallo cinema. That means, not everyone is going to get the joke. It’s like if the Scary Movie franchise only riffed on the Chinese hopping vampire genre, there certainly wouldn’t be five of those films by now. I’m a huge giallo buff, and The Editor was definitely on my radar for some time. All the pieces are there for the die-hards: poorly dubbed audio, nonsensical leaps in logic, ever persistent misogyny, and so much psycho-sexual delusion!

The film lifts too many images and motifs from various gialli to count. Fans of Argento, Fulci, Bava, and Martino should certainly give this a one time watch. I was entertained throughout, despite the fact I only chuckled a few times. Even for someone who caught most of the references – it just isn’t that funny, but there is enough to admire in the fantastic cinematography, stolen score, and jaw dropping practical gore effects. 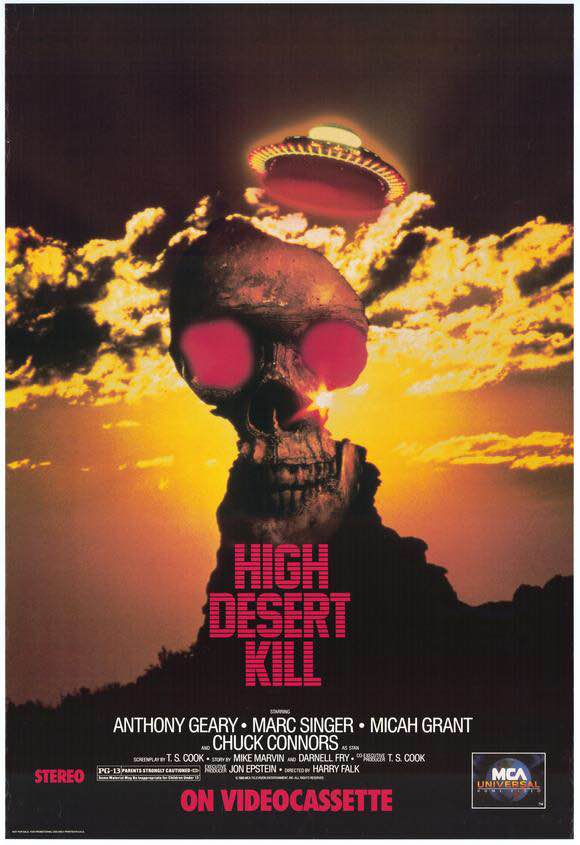 I wish I’d watched the trailer for this first, but I didn’t. High Desert Kill is really bad. I don’t even want to tell you about the plot for fear I might make it sound more interesting than it is, thus causing you to track it down and suffer the same fate as I. Okay, there’s probably no way to make this sound that interesting. A group of friends go hunting in the desert to mourn the loss of their close buddy. I know this because it’s ALL they talk about for the first thirty minutes. By the way, I seriously had no idea hunting in the desert was a thing. Is that a thing?

I had a copy of this film collecting dust on my hard-drive for some time and had actually seen some positive reviews online. I figured, “Great! A monster movie I haven’t seen, and it’s Monster Monday.” Unfortunately, this doesn’t really qualify as a “monster” movie. There is something, which is shown in the very last few seconds of the film, lying lifeless on the ground. That’s right. The “monster” is actually a cool creature design, but no one could be bothered to shove their hand up its arse or attach some wires to it in order to make it move. The rest of the time we are gifted Predator style heat vision POV shots from whatever this thing was. Seriously, I’m not sure what was going on. The dead guy’s ghost was making them turn on each other, but it wasn’t a ghost – it was a lab experiment gone wrong turned psychic specter/alien thing.

I never fast forward through even some of the trashiest trash, but I couldn’t take it. I started skimming through the third act. Feeling ripped off and robbed of my monster movie fix, I’m now watching Tremors 2. It might not be good, but it’s stupid fun, and that’s all I was asking for. 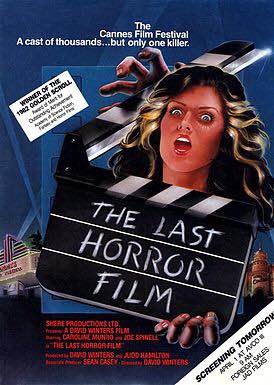 Joe Spinell stars as a sweaty psychopath loosing his grip on reality, slipping in and out of a delusional fantasy life, who becomes fixated on a pretty young woman, played by Caroline Munroe. No, this actually isn’t Maniac. I’m talking about The Last Horror Film, and the pretty young woman is not a photographer but a famous horror movie actress, Jana Bates. Think of this as a spiritual successor to Maniac.

Spinell’s character is a loser who lives in a cramped apartment with his mother (played by his real life mom). He has dreams of being a big time director and decides to pack up his belongings and head to the Cannes Film Market to find Jana and “convince” her to star in his film. Needless to say, he doesn’t achieve this by having her sign a contract and agreeing to except profit points. This is a grimy flick, shot in and around the actual Cannes festival (probably without permission). Definitely check this out if you like the sleazy stuff and are a fan of Maniac. There is a cool twist that I didn’t see coming and a dark sense of humor that gives the film its own personality.

BONUS, you can watch it for free right here on Troma’s YouTube channel! 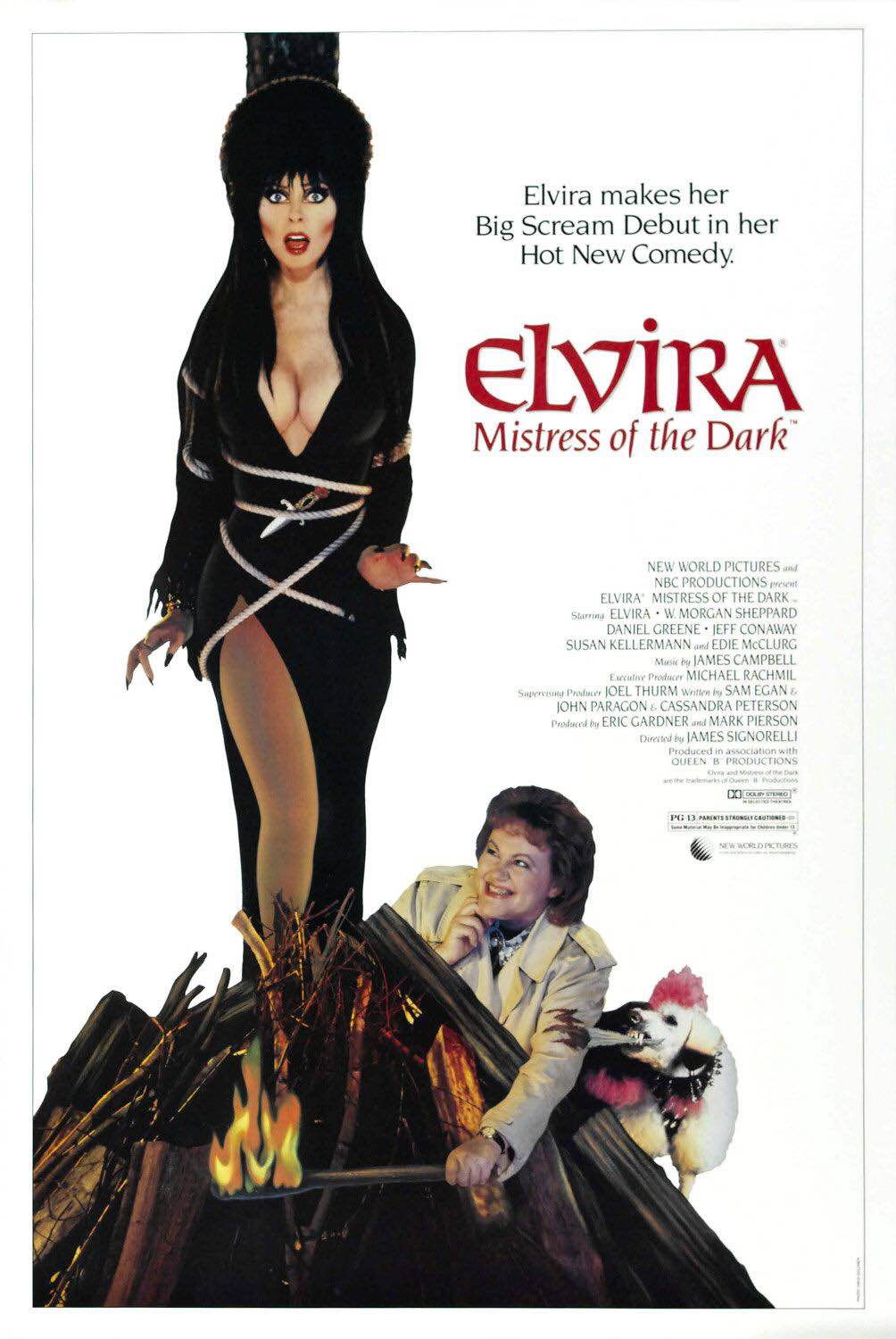 I’ve always loved Elvira. Even without really watching her show as a child, I just simply knew who she was. She was like the Santa Claus of Halloween. One evening I was lucky enough to be staying over at my aunt’s for an evening. She had those fancy and dangerous pay cable stations and Elvira: Mistress of the Dark was on. My memory is very blurry, but I know I loved it. I also remember my mom not being too pleased that my aunt let me watch it. Oh well. I was already tainted. Though the majority of the jokes went right over my head, I was able to enjoy the dance numbers and tacky special effects. I’ll never forget Elvira’s failed culinary adventure that leads to a reptilian monster jumping from her dutch oven.

It was this memory that caused me to re-vist Elvira for “Witch Wednesday”. While it certainly didn’t live up to foggy childhood memories, the plot takes a full hour to kick in, but Elvira herself can carry the film even when nothing is really happening. Cassandra Peterson was at her vivacious best, several of the jokes landed despite the cheese factor, and the final third caught me off guard once it goes full on horror comedy. I only wish it had been a bigger success so there would’ve been further sequels. That said, Elvira’s Haunted Hills is also a fun time. 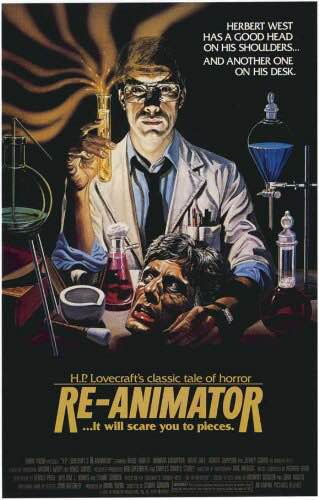 Reanimator is a classic. There should be no disputing this, but I’m sure there are still some of you out there that have never seen it. It’s loosely based on the work of H.P. Lovecraft and stars genre legend Jeffrey Combs as Dr. Herbert West along with scream queen extraordinaire, Barbara Crampton. Dr. West is experimenting with a glow stick green serum that has the ability to reanimate the dead. Hi-jinx ensue.

Really, there are few movies as perfect for the Halloween season as this. No, it doesn’t take place in October, but it captures the spirit of the holiday. The gore is absolutely stomach churning and there’s plenty of fantastic “Boo!” moments, and it’s such a blast to sit through. This is the perfect party film, and it’s streaming right now on Netflix! Make this a double feature with Seed of Chucky for a hell of a fun movie night. 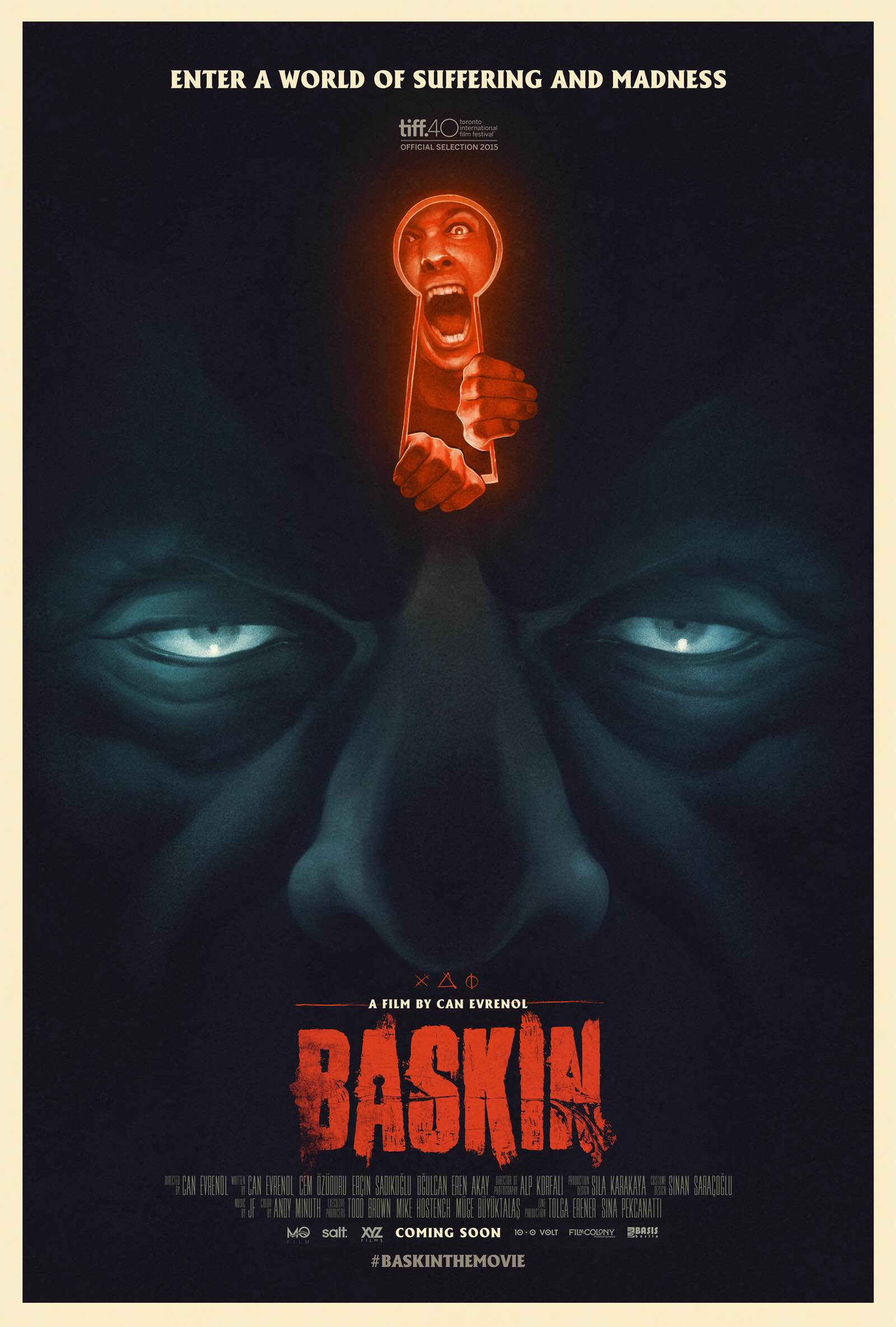 Baskin made quite the stir when it hit the festival circuit. There were murmurs this was the next Hellraiser, and I can certainly see where those comparisons come into play. This is brutal, dark, and repulsive material. There is also a dangerous sexuality at play throughout. A group of asshole cops are in a wreck on the way to a crime scene. What follows is a decent into hell; perhaps, literally.

Overall, I enjoyed the film. It had me squirming in my seat from the graphic depictions of torture, and I believe they set up an interesting mythology that could be explored further in potential sequels. The problem is the characters are truly unlikable, and the “hero” of the piece is robbed of any sympathy early on by a lack of action in a pivotal moment. The third act boils down to nothing more than a series of stylistic torture set-pieces, making it a difficult film to recommend. But if you’re looking for something extreme, I’d say give it a shot. The main villain is one of the strongest practical makeup pieces I’ve seen in a very long time, and if you want gore and depravity – look no further. It’s nowhere near as “dangerous” as something like Cannibal Holocaust (what is, really?), but it will feed your extreme fix.

Alright, that was everything I watched for Week #1! Tune is next Saturday for Week #2’s update, and let me know what films you’ve checked out this week in the comments below. Happy Halloween!