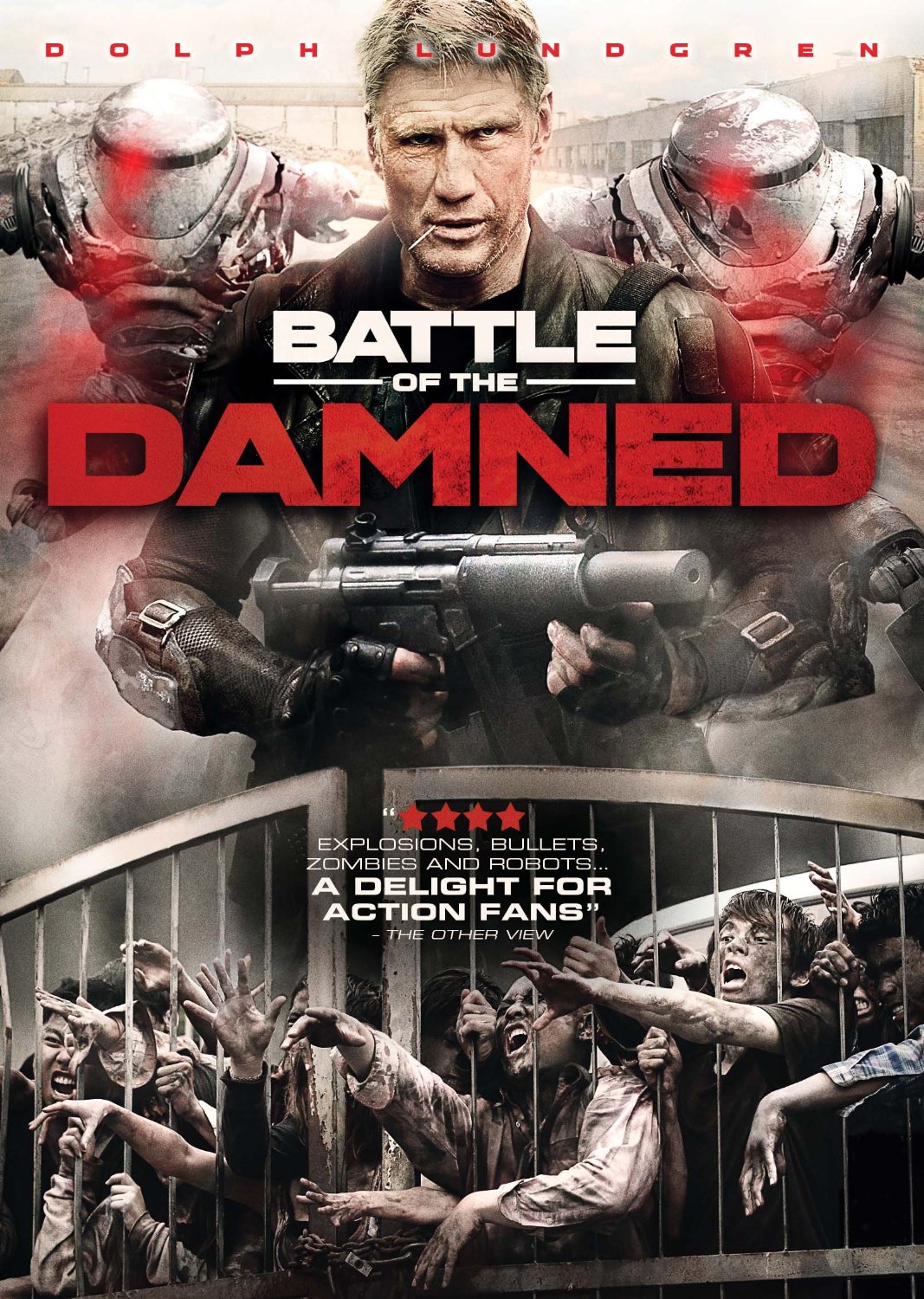 Zombies and robots and Dolph Lundgren… OH MY!!

Alright, so here’s the deal. I’m tired of zombie movies. I love zombie movies, don’t get me wrong, but I’m quite frankly sick and tired of them. Zombie movies have been more overdone and overplayed than found footage movies in the last several years, and there’s very little anyone can do at this point to get me excited about anything that has to do with the undead flesh-eating sacks of shit that George Romero is responsible for us all falling head over heels in love with.

True, I’m an avid watcher of The Walking Dead, and love every single second of the show, but aside from that, I think it’s time to lock zombies away for a few years and give them a break. Their jaws have gotta be tired from all that biting, munching and tearing, and I think we all need to let them rest for a while.

At least, that’s the way I felt until I saw the trailer for Battle of the Damned, which just hit the net yesterday. A mere 120 seconds after clicking the play button, a change of heart washed over me, and my interest in zombie movies was once again piqued. Only you have the power to bring about that change, Dolph Lundgren… ONLY. YOU.

Something you might not know about me is that my all-time favorite movie isn’t actually a horror movie, despite the fact that horror movies are my favorite kinds of movies – ironic, I think is the proper word for that. What is my all-time favorite movie, you ask? 1987’s live-action Masters of the Universe film – and I wouldn’t expect you to understand the love I have for that movie unless you too were introduced to it at a young age.

Though I’d admittedly have a hard time arguing with anyone who feels the movie is nothing more than a hunk of 80s junk, the fact of the matter is that I absolutely adored Masters of the Universe when I was a kid, and I haven’t lost a single shred of that adoration in the years since my childhood. Though I’m now 27 years old, with a full beard and a much more grim outlook on life, Masters of the Universe still to this day remains a cinematic masterpiece in my eyes, the one movie that I’d take with me if I were shipped off to a desert island… that had electricity, a TV and a Blu-ray player on it.

The reason I bring this up is because it was of course Dolph Lundgren who played He-Man in the live action adaptation of the popular toy line. Due to the aforementioned childhood connection I have to the movie, Dolph is forever a badass hero in my eyes, and I admit that his awesome performance in Masters has resulted in me spending far too much time on the couch, watching far too many awesome Dolph Lundgren movies, with far too many awesome Dolph Lundgren performances. I just can’t get enough. Everyone’s got that one actor that they love dearly, and will watch anything and everything they’re in, and for me Dolph is that guy. I didn’t choose for him to be that guy, but then again childhood exposure to Masters of the Universe didn’t leave me with much of a choice.

In my new favorite movie that I’ve never seen, Battle of the Damned, Lundgren stars as former commando Max Gatling (as in, the gun), a badass dude who a wealthy industrialist hires to rescue his daughter. The world has been overrun by zombies, you see, and the rich dude’s daughter is locked inside of a military blockade. It’s up to He-Man to blast his way in and save the young girl, before she becomes a three-course meal for the hungry zombies.

Check out the trailer for Battle of the Damned below, and look for it on DVD and Blu-ray February 18th of next year!