Today, I invite you on a journey. Where are we going, you ask? Where aren’t we going, would be the more appropriate question. Because like Santa Claus on Christmas Eve, we’re (virtually) traveling the globe this afternoon, on the hunt for the most totally awesome home video cover arts that Christmas horror movies have ever been adorned with. And we’re not talking about the ones we’ve all seen, like Silent Night, Deadly Night‘s iconic imagery of Santa coming down the chimney with an axe. Oh no. We’re heading outside of America for this one, and making pit stops in Japan, Germany and Spain along the way.

Today, we rank Christmas horror movies not by their merits as films, but rather by the beautiful and bizarre imagery that’s been slapped on their foreign VHS and DVD covers. So come along with me on this holiday journey, won’t you?

Oh and these are in no particular order. And there are only nine because I couldn’t come up with ten. So there. 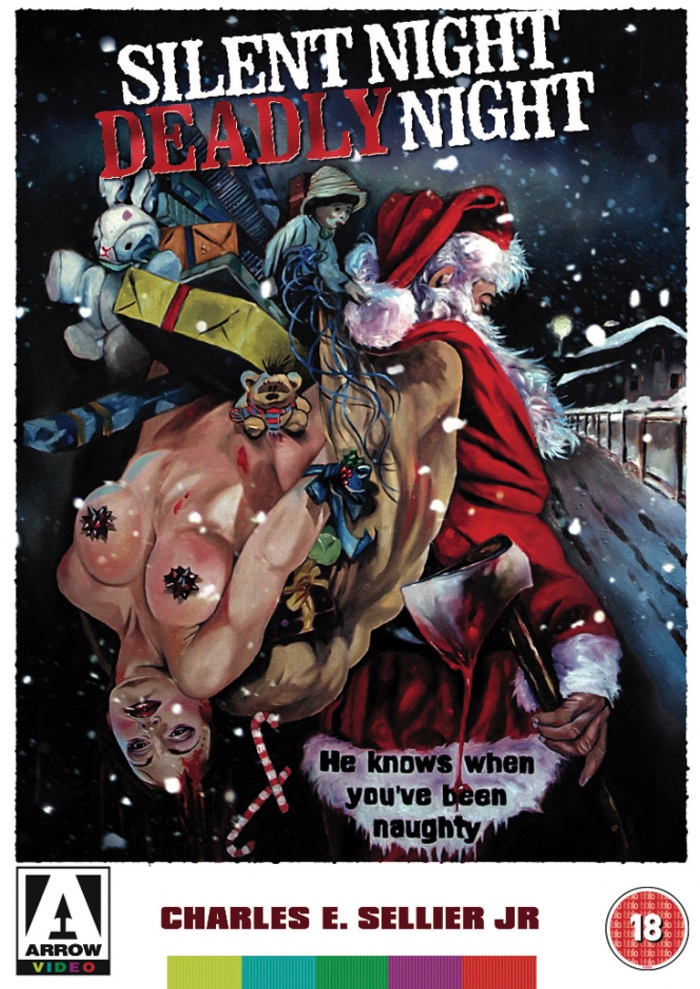 Back in 2009, Arrow Video released Silent Night, Deadly Night over in the UK with this cover art attached to it. Though it’s the exact same DVD as the one we got here in the states, and though I already owned that U.S. release, I nevertheless had to pick this one up… for obvious reasons. No, Billy never carried around a naked woman in his sack… but he totally should have. 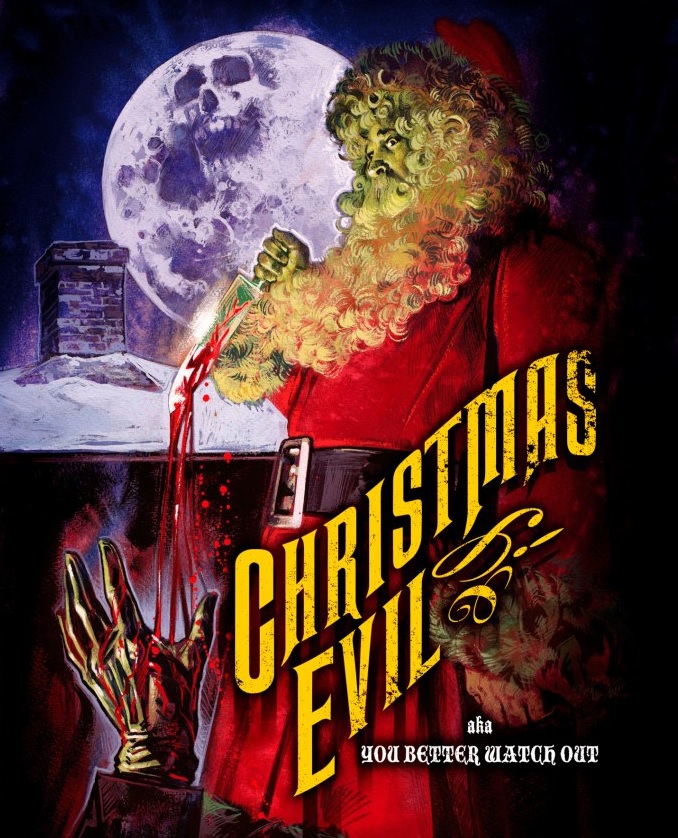 Last year saw the UK release of Arrow’s Christmas Evil DVD, a totally underrated horror flick that brought a killer in a Santa suit to the screen years before Silent Night, Deadly Night did. No, the moon never turned into a skull and screamed into the night sky, while Santa stabbed a dude… but it totally should have. 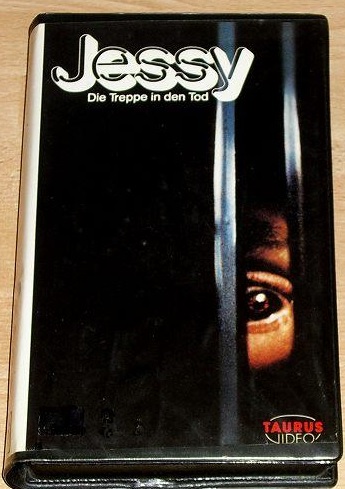 When it comes to art, less is sometimes more, as this German VHS of Jessy beautifully showcases. When I ran the word Jessy through Google’s handy translator, the English translation I got back was the word Jessy, so I’m not sure what the hell it means (a reference to Olivia Hussey’s character, perhaps?). Nevertheless, the movie is of course Black Christmas, and this awesome cover art highlights that creepy moment where we see Billy peering out from the closet – the only glimpse of the character we ever really get. By the way, the German to English translation of the full title is Jessy: The Stairs to Death, which is totally awesome.

Side Note: Only in typing the above paragraph did I just make the connection that the killer in Black Christmas was named Billy, just like in Silent Night, Deadly Night. From now on, I will choose to pretend it’s the same Billy. And you can’t stop me. 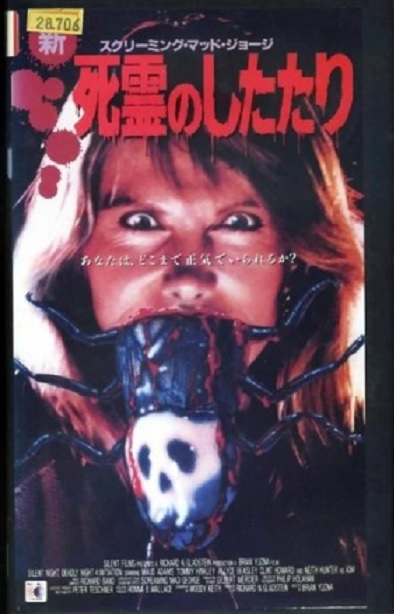 The Silent Night, Deadly Night franchise is a strange one, as the final two installments in the series had absolutely nothing to do with the storyline from the first three. The fourth one is particularly bizarre, because it doesn’t even have anything whatsoever to do with Christmas – aside from some decorations in the background, that let you know what time of the year it is. Titled Initiation, Silent Night, Deadly Night 4 is a pretty fun little standalone tale, full of disgusting bugs and awesomely gruesome practical effects. One of the more memorable scenes is when a chick gives oral birth to a squirmy cockroach, which was immortalized on the epic cover of this Japanese VHS release of the film. Bonus points must be awarded for the skeleton costume the bug is wearing. Lookin’ good, bug. 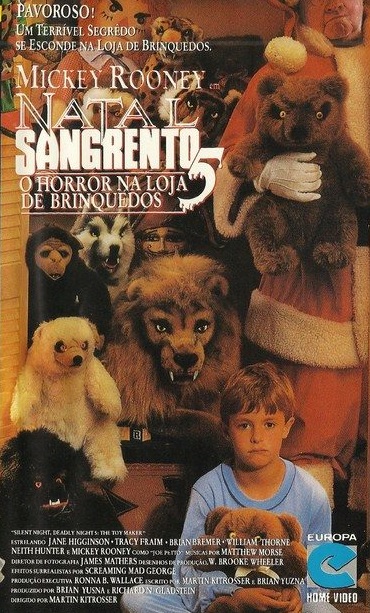 I’ve always loved the U.S. poster art for Silent Night, Deadly Night 5: The Toy Maker, which has a sad little boy sitting in front of a closet full of mean, angry stuffed animals. Though the movie is indeed about killer toys, no stuffed animals actually do any killing in it, but it’s nevertheless an image that I cherish. This Brazilian VHS release makes the art even more awesome, by adding Mickey Rooney in a Santa suit to the mix. Rooney stars in the film as an alcoholic toy shop owner with a living Ken doll for a son, an ironic twist of fate considering he spoke outwardly against the original film… and its depiction of a killer in a Santa suit. Because money supersedes morals and beliefs. 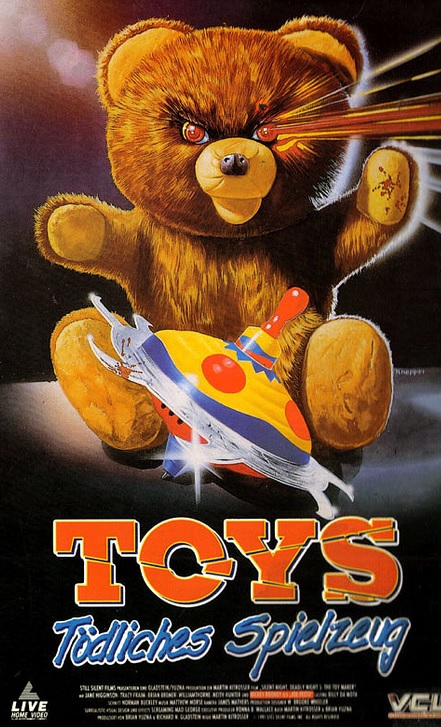 Due to the fact that it’s about killer toys, and doesn’t have anything to do with the franchise, Silent Night, Deadly Night 5 was released under the title Toys – Tödliches Spielzeug in Germany – which translates to Toys – Deadly Toys. A little blunt and on the nose, but I dig it. Again playing up the whole stuffed animal thing, this artwork is too awesome to even try and convey the awesomeness of, so I won’t even bother. Just look at it. And enjoy it. 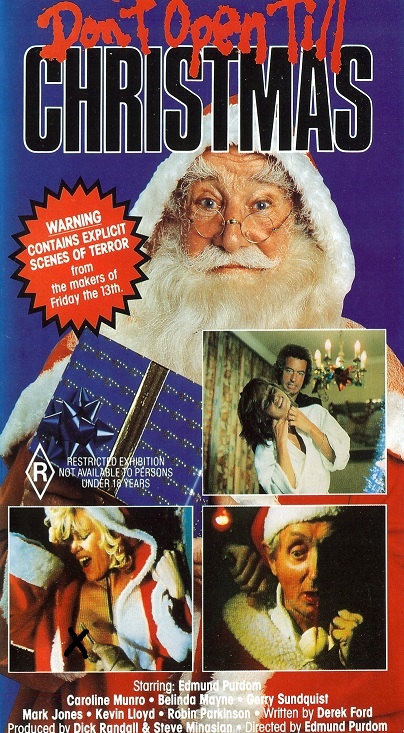 An export of the UK, 1984’s Don’t Open Till Christmas is perhaps the most interesting Christmas horror film ever made. Rather than centering around the typical killer in a Santa suit, this one is about a killer that targets people wearing Santa suits, which puts a fun twist on the proceedings. Truthfully, the movie is pretty bad and quite boring, but you wouldn’t know that by looking at this gloriously cheesy art from the Australian VHS release of the film. Resist the temptation and obey the order of the words that are hovering over your head, Santa. Trust me. 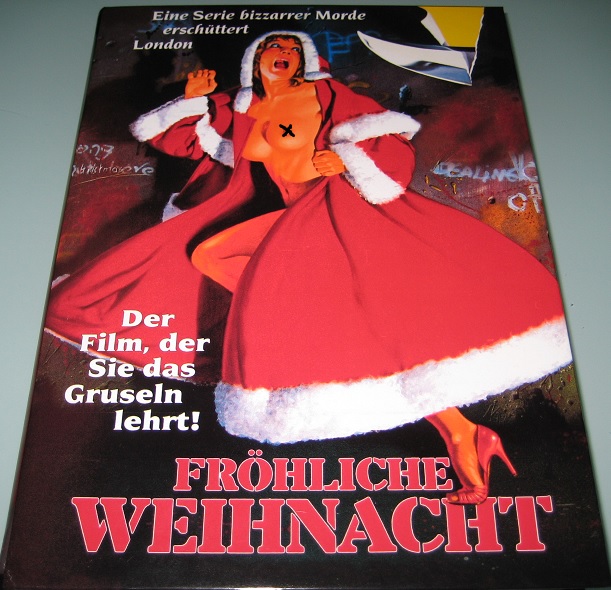 In one of the more exploitative scenes in Don’t Open Till Christmas, the killer approaches a sexy model wearing a Santa suit of her own, and he proceeds to unwrap her like a Christmas gift. The scene is of course thrown in for the sole purpose of shoe-horning in some boobies, and the Germans played up the titillating scene for this eye-catching DVD release. Now that… is how you sell a movie. 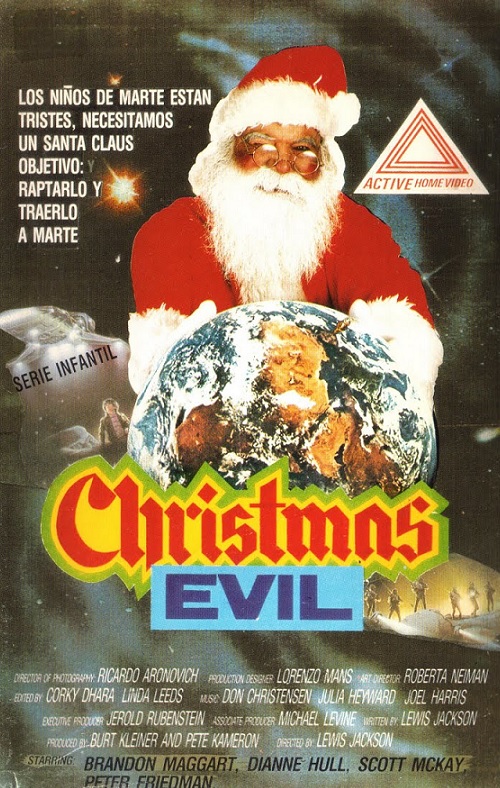 And finally, the award winner for the best cover art of all time has simply got to go to this Spanish VHS of the aforementioned Christmas Evil, which is so misleading and so amazing that it can only be described as a work of art. No, your eyes do not deceive you. Santa indeed does have the whole world in his hands, and yes, that is some sort of alien spacecraft in the sky behind him. If the movie was about a mega-sized alien Santa that takes over the world, this art would simply be pretty cool. But since there’s not actually any sort of sci-fi element to it whatsoever, this art is a goddamn masterpiece. Throw the Mona Lisa away, and hang this in its place. NOW.

And that about concludes our journey. I hope you’ve enjoyed traveling the globe with me, and I wish you and yours a very Merry Christmas!