There’s a little horror movie Q&A floating around YouTube at the moment, where one user tags another and tasks that person with answering ten personal choice questions about the genre. Of course, this isn’t YouTube, nor do I even have a YouTube channel, but I thought it might be fun to take part in the challenge.

So if you’re interested in getting to know a little bit more about me, in regards to my horror movie tastes, then take a peek down below for my answers to the ten questions. And I challenge the other writers here on Halloween Love with doing the same, at their earliest convenience.

So consider yourself tagged, Martyn and BJ. And thanks to YouTube’s Skinslip for bringing this challenge to my attention, and to That Horror Whore for creating it! 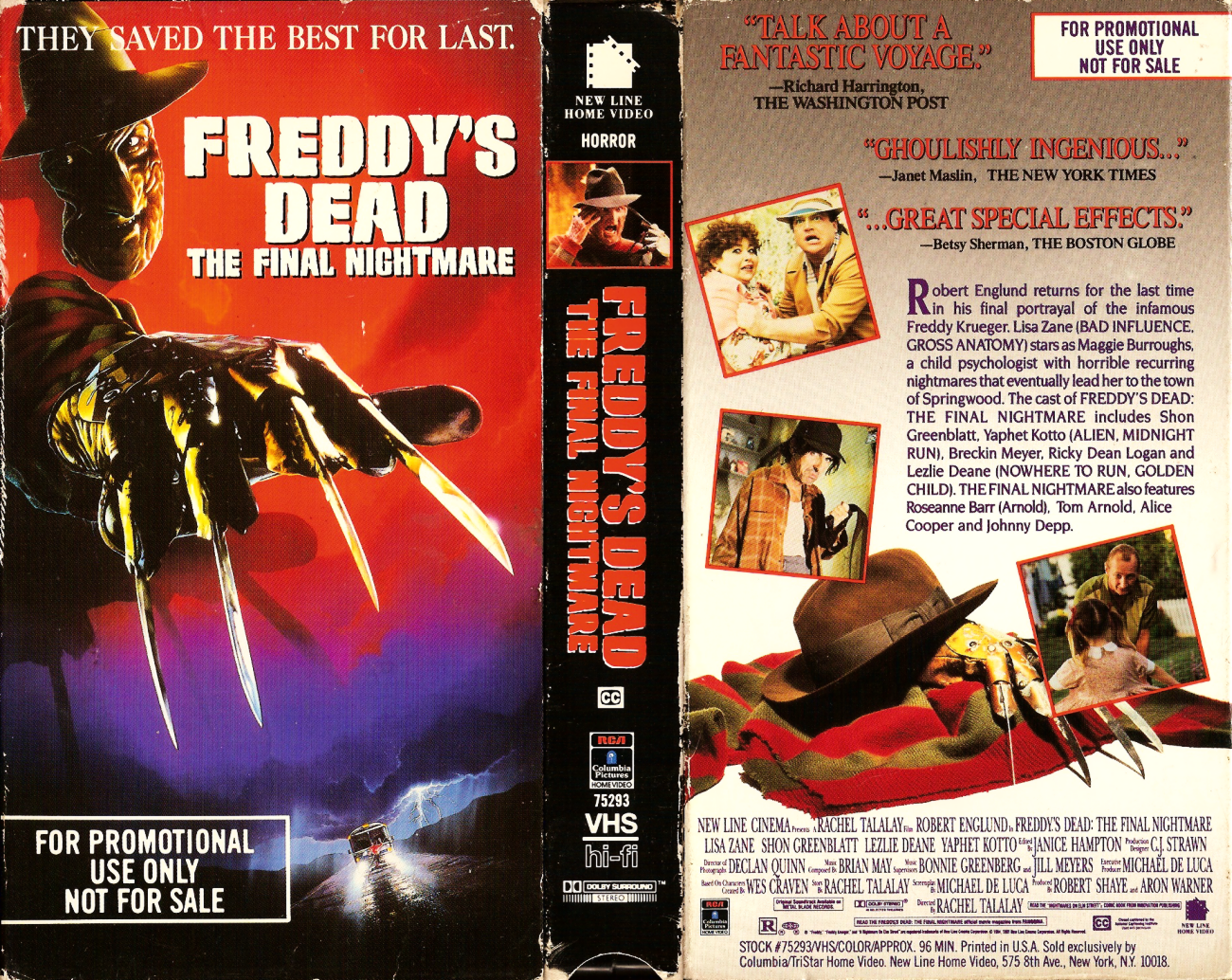 1. What was the first horror movie you remember watching?

The earliest horror movie memories I have are almost all tied to the Nightmare on Elm Street series, as I can vividly recall being completely enamored with the franchise’s VHS box art at my local Blockbuster. I rented all of those original films several times over, but it is Freddy’s Dead that stands out in my mind as being the first horror movie I can actually remember watching.

And I even remember the specific circumstances of the viewing. My brother and dad rented a cabin in upstate New York for the weekend, where they were staying with my brother’s friend and his dad. I stayed at home with my mom, and we rented Freddy’s Dead and watched it together. I must’ve been seven years old at the time, or somewhere around that age, and I can even vividly remember eating those gross Circus Peanuts while watching the movie.

I’m sure Freddy’s Dead isn’t actually the first horror movie I was ever exposed to, but my memory just doesn’t go back much further than that night.

2. What is your favorite horror movie?

This is a question I honestly hate being asked, because there’s really no single horror movie that I can pinpoint as being my absolute favorite – and if one does come to mind at any given time, it has often changed by the time I’m asked the question again. But right now, if I’m being forced to choose, I’ve gotta go with Silent Night, Deadly Night.

As I always like to point out, ‘favorite’ is an entirely different thing than ‘best,’ and so when I answer Silent Night, Deadly Night it’s more a matter of that being the one horror movie I’d choose to watch if I could only watch one horror movie for the rest of my life. I’ve always had a weird obsession with it, and I feel it’s the perfect slasher film.

There’s a reason I own about 10 different home video releases of Silent Night, Deadly Night, and I’m pretty sure that reason is because it’s one of my favorite things in this world.

3. What is your favorite horror movie sub-genre?

I’m not the type of fan who’s really drawn to a particular sub-genre, and in fact I often prefer the movies that sort of blend a few of them together, and don’t really play by the rules of any single one. But when I look back on my favorite horror movies from the last few years, almost all of them are grounded in reality, dealing with humans doing bad things to other humans.

Which I guess is the perfect segue into this next question…

4. What horror sub-genre scares you the most?

Monsters like zombies, werewolves, vampires and ghosts have never really scared me, and that’s mostly because I don’t believe in the existence of any of them. But what does terrify me, more than anything, are my fellow human beings. So the type of horror movie that’s often most effective in scaring me is the home invasion film.

Whenever I watch a well done home invasion movie I find myself unable to sleep that night, as I’m constantly worrying that someone is going to break into my house. In fact, a home invasion is my biggest legitimate fear, which is naturally why those sorts of movies have such an impact on me.

People are scary, man. What can I say? 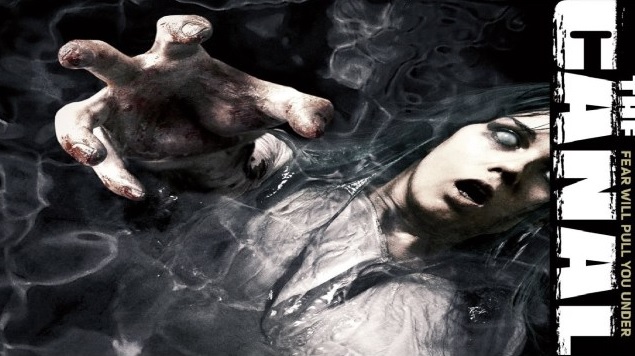 5. What is the last horror movie that actually scared you?

I know I just said that ghosts don’t typically scare me, but holy shit did Ivan Kavanagh’s The Canal keep me up at night. The film, currently available for instant streaming on Netflix, centers on a man whose wife drowns in the titular canal, with strange events convincing him that a demonic entity is to blame.

As I wrote in my review of The Canal here on Halloween Love earlier in the year, the Irish film got under my skin so much that I turned on all the lights in the house after I was done watching it, and kept them on that entire night – even while I slept.

The Canal is one of last year’s best horror movies, and it’s also the downright scariest to come along in many years.

6. Who is your ultimate scream queen?

With all due respect to ladies like Jamie Lee Curtis and Linnea Quigley, it is Danielle Harris that immediately comes to mind with this one. I can’t think of any other Scream Queen who literally earned that title as a goddamn child, and it’s one that Harris has been wearing around her waist for nearly 30 years now.

Danielle Harris is still to this day kicking ass and has screamed her lungs out in recent films like Hatchet 2 & 3, Stake Land and See No Evil 2, and I’d have to say that she’s gotten even better with age. Many of her best roles have been in the last few years, and you’ve just gotta respect her longevity.

If there’s any actress who has been a lifelong ambassador of the horror genre, it’s Danielle Harris. Plus she’s totally adorable, which helps.

7. What is a concept that you would like to see in a horror movie?

Being that I’m one of those writers who someday hopes to break into screenwriting, it’s probably not a wise idea to share any of the original concepts I’ve got rattling around in my brain. I’m not sure I’d be able to sleep at night if I let one loose and somebody jacked it before I got the chance to write it, so I’m going to go in a different direction here.

As previously mentioned, A Nightmare on Elm Street is the franchise that helped usher me into a lifelong love of horror, and one thing I’ve always been bummed about is that we’ve never really gotten a Krueger origin story. Sure, we know what his origins are, as some of the sequels delved into his past, but I can’t help but feel that a true prequel movie could be really awesome.

After 2010’s failed reboot, I can’t think of a better way to breathe some new life into the franchise than with a brand new origin story, and I’m also totally open to the idea of a TV series. Shows based on horror movies are mega popular right now, and Elm Street would probably be a perfect fit for that medium. 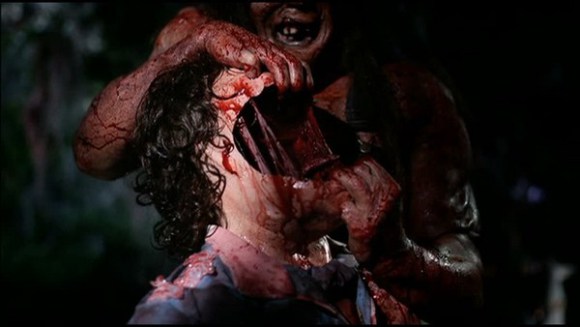 8. What is your favorite onscreen kill?

I’m not sure why so many horror fans have bad things to say about Adam Green’s Hatchet, because that movie is pretty much the personification of everything we loved about goofy 80s slasher films. The kills, all practically created, are absolutely amazing, and the jaw rip in particular is perhaps my favorite death scene of all time.

Appearing out of nowhere, Victor Crowley grabs a hold of an old woman’s head and literally rips it completely apart the jaw, leaving behind little more than a flailing tongue. Like the kills of the 80s, it’s one of those horror movie moments that makes you wonder how it was even pulled off, as the whole thing appears to be happening in one single take.

9. What is your favorite horror franchise?

The obvious answer here, given my previous answers, is A Nightmare on Elm Street, though I don’t want to bore you with more Freddy talk. So instead, I’m going to go with The Texas Chainsaw Massacre. The Chainsaw franchise is undoubtedly the most unique (not to mention confusing) of them all, and I love the way that each sequel feels like a movie that stands completely on its own two feet.

Sure, there have been some duds throughout the franchise, but I can honestly say there’s not a single Chainsaw film that I don’t have some level of love for. I’m a huge fan of the first three films and the remake, and even Next Generation and Texas Chainsaw 3D have their charms. And then there’s of course the remake’s prequel, which is pointless but kinda great.

Simply put, I just love any movie that Leatherface is in, and if there’s one franchise that I hope continues until the end of time, it’s this one. Send that fucker to outer space, I don’t even care. I just want more Leatherface on the big screen.

10. Who is your favorite horror director?

I can’t really think of any director who hasn’t made a few duds throughout his career, whether we’re talking legends like Carpenter and Romero or new blood like Rob Zombie. Nobody’s perfect, as they say, but the most perfect to me is Wes Craven. Sure he’s directed some crap, but the guy who created Freddy will always be tops in my book.

But you already know great Craven is, so let’s talk about some other directors who often don’t get much recognition. Tom Holland, writer/director of both Child’s Play and Fright Night, as well as writer of the exceptional Psycho 2, is as much of a legend as any other, and Fred Dekker (Monster Squad, Night of the Creeps) is a dude whose feet I will forever kiss.

As far as current directors who continually excite me, names like Greg McLean (Wolf Creek), Nicolas McCarthy (At the Devil’s Door), Ti West (House of the Devil, The Sacrament), Michael Dougherty (Trick ‘r Treat), Jim Mickle (Stake Land, We Are What We Are), and Eli Roth (Cabin Fever, Hostel) represent the cream of the current horror crop. When those guys make new movies, I get excited.

So that’s that. Even if I didn’t tag you in this post, feel free to write up your own answers on your own website – and be sure to drop us a link in the comments section below!