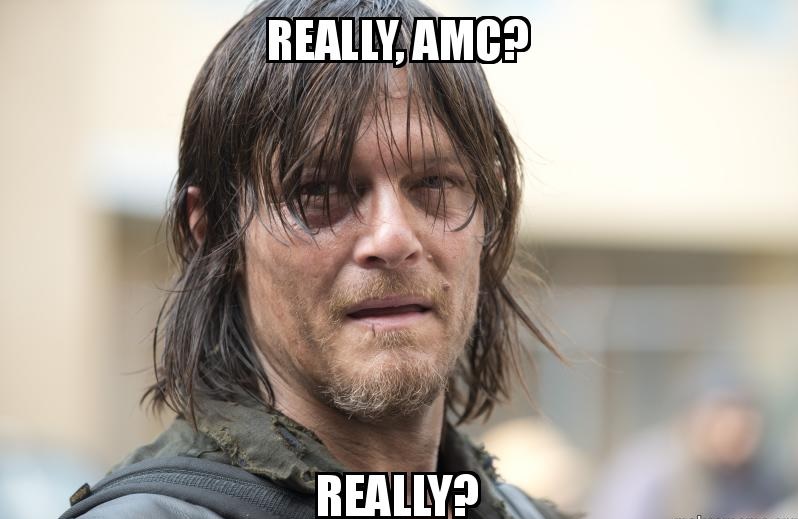 As expected, every entertainment website on the internet is talking about The Walking Dead today, in the wake of last night’s mid-season finale. There’s a whole lot of outrage, though it has nothing to do with the show killing off another main character.

Immediately after Dawn shot Beth in the head, the official Walking Dead Facebook page posted a picture of Daryl holding Beth’s lifeless body, with the caption ‘RIP Beth.’ What’s the problem with that, you ask? Well, the episode hadn’t yet aired on the West Coast, thereby making the post a pretty major spoiler.

It wasn’t long before the post was pulled from the page, though the damage had already been done. Millions of fans had the ‘shocking’ finale of the fifth season’s first half spoiled for them, before they were able to watch it for themselves, which is needless to say a flub that has likely resulted in AMC’s social media department getting a big ole slap on the wrist.

The fact that Beth’s demise was the most obvious character death in the show’s history did little to ease the anger of many outraged fans, who have been taking to social media all day to express their displeasure with AMC. And rightfully so, because a spoiler is a spoiler, no matter how predictable that spoiler may be to some viewers.

Should AMC have been mindful of the fact that not everyone had a chance to see the episode, before they spilled the beans? Yes. And should fans be more considerate on social media, when they offer up their thoughts on just-aired episodes of major shows? Absolutely. I’m not going to sit here and justify spoilers that are out in the open for all to see, as it’s a total dick move, no matter how you slice it.

But here’s the thing. There’s a pretty simple way to avoid social media spoilers of your favorite TV shows, an almost foolproof precaution that has to date worked for me every single time. I call it the SOSM approach: Stay. Off. Social. Media.

I know what you’re thinking right now: ‘Why should I modify my internet habits because of inconsiderate dicks?’ Honestly, you shouldn’t have to. And it sucks that you have to. But guess what? You have to. This is the society we live in. You know the way things work by now. And unless you want to continue being exposed to spoilers, you’ve got no choice but to take this precaution.

There have been plenty of times where I wasn’t able to watch a new episode of The Walking Dead as it aired, and yet I can honestly say that I’ve never had anything major spoiled for me. Despite my addiction to social media, I always make it a point to stay off both Twitter and Facebook on these occasions, and I also always make it a point to play catch up ASAP, so that I can resume my normal social media habits ASAP. Because addiction.

Though I’m surely going to catch shit for saying this, I honestly don’t even fault AMC for ‘spoiling’ last night’s episode. Sure, they should’ve held off for a bit, but what West Coast Walking Dead fan in their right mind was on Facebook last night, when they knew the episode had aired on the East Coast? Is it that hard to stay off Facebook for a couple hours? And was anyone honestly shocked that logging in resulted in the episode being spoiled?

Yes, it’s shitty that the goddamn network is the one that posted the spoiler, but again, it could’ve been easily avoided by anyone who really wanted to avoid it. We simply must evolve with the times, and when it comes to TV watching, evolving with the times means treading carefully around the internet, when others have seen new episodes before we have – whether you like that or not.

If you’re one of those fans who had the episode spoiled last night, you’re probably sitting back right now wishing death upon me for suggesting what I’m suggesting. And I get that, I really do. But please, before you go on the attack, make sure you’re not misreading what I’m saying here. I’m not saying you shouldn’t be mad, or that it’s your fault when others post spoilers. I’m simply saying that there is a way to avoid situations like last night’s, and I hope you’ll take those precautions, going forward.

One other thing I want to address, in relation to all this, is the general topic of spoilers. The way I see it, both movies and TV shows are about the journey, rather than the destination, and so I’ve personally never been bothered by having anything spoiled for me. I knew Bruce Willis was dead the whole time, long before I ever saw The Sixth Sense. But it didn’t matter. It was still a great fucking movie.

Same goes for The Walking Dead. I knew Beth was dying, going into last night’s episode, and that didn’t have any impact on my enjoyment of the episode. As a society, we’ve become so anti-spoiler that we feel like something is ‘ruined’ simply because we know the end result, which is rarely ever the case. Is life less enjoyable, because you know you’re going to die in the end? No, it shouldn’t be.

So relax. These are just TV shows we’re talking about. Spoilers aren’t the end of the world, and it’s time we all make peace with the fact that they’re an inherent part of social media, and learn to do what’s necessary to avoid them. We shouldn’t have to. But we do have to. Because the world doesn’t start and stop at our convenience.

And hey. If the biggest problem of your day is AMC tipping you off to the fact that Beth got shot in the head, well, then you’ve got it pretty damn good, my friend.