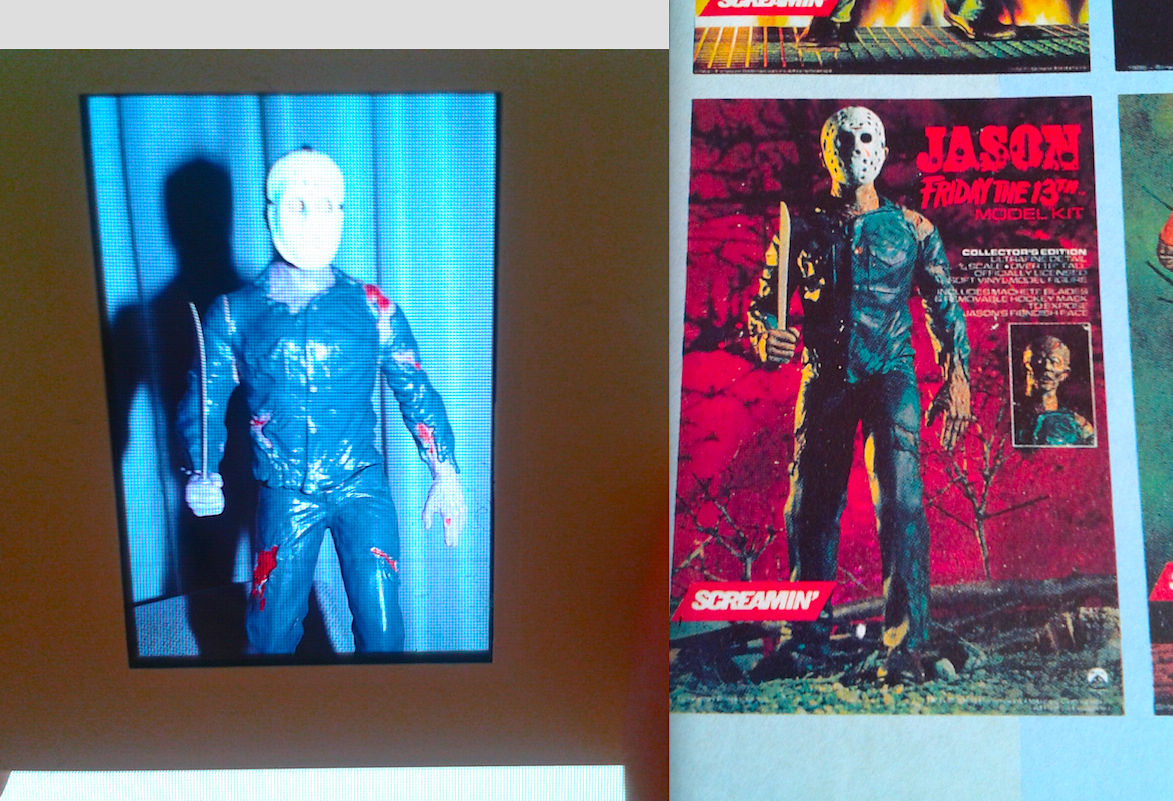 Have you ever been rummaging through an old box or cupboard and found something that knocks the wind out of you with pure nostalgia? Like a scene from one of those made-for-TV afternoon movies where a character finds a childhood possession in their grandmothers dusty attic which causes them to stare at the object and become all misty-eyed.

Well it happened to me last week. Minus the attic, and the misty-eyes, and the romantic music in the background … but I DID find something I didn’t know existed, and that something was a photographic slide, containing a picture of the first genuine horror collectable I owned as a kid! 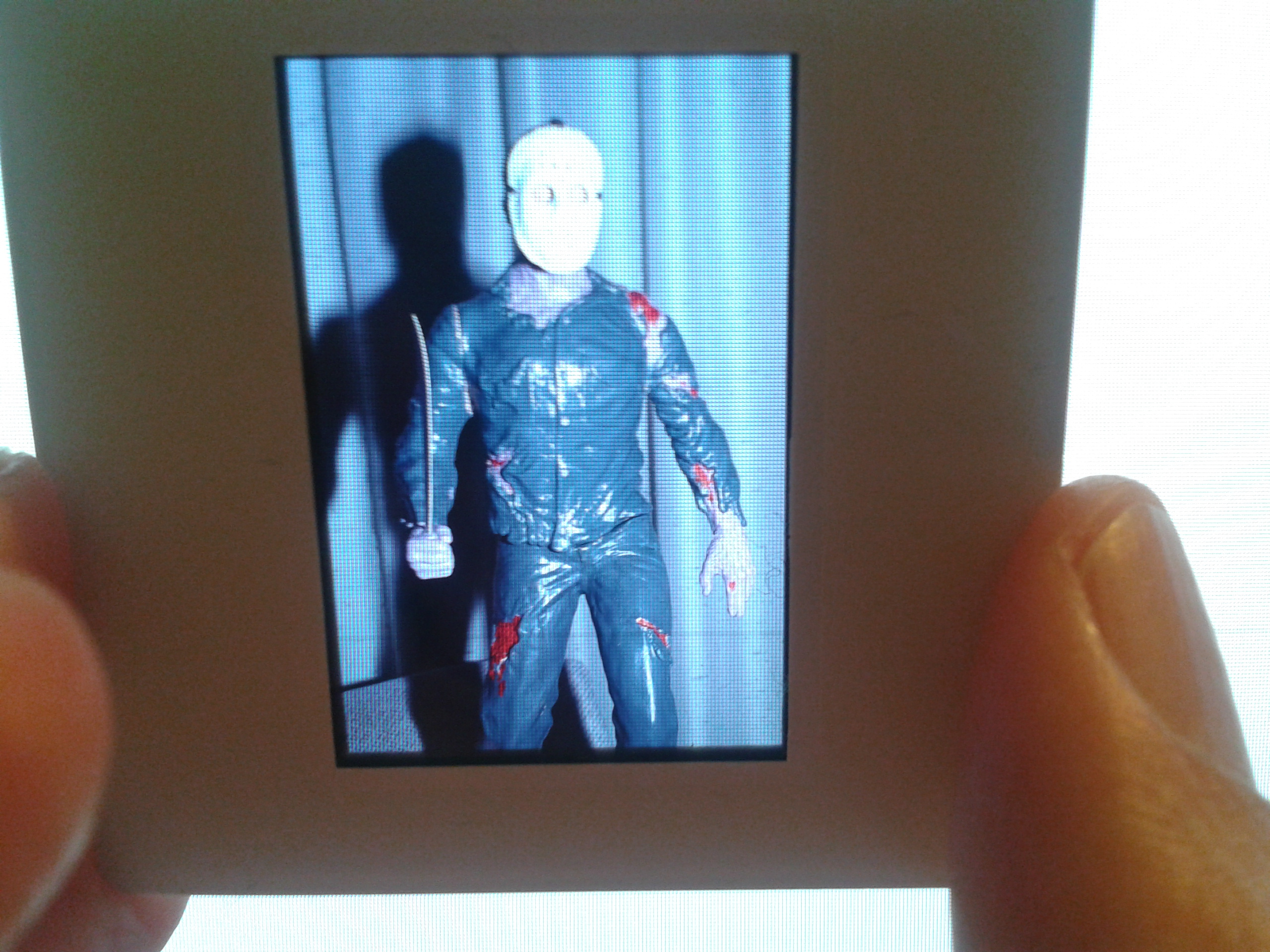 The item in question was the Screamin’ Jason Voorhees model kit, which I believe was one of the first ever licensed Jason products to be released in America and around the world. The vinyl figure came in a large colorful box and was obviously unpainted and unassembled. I can’t exactly remember the year my parents purchased it for me through a mail order promotion, but I THINK it was released in 1988, so I probably got mine for Christmas 1989, which would make me 14 years old at the time.

Just between you and me … I remember being shocked when it arrived and I discovered it was a model kit, because I stupidly thought I would be getting a fully painted and ready to display Jason Voorhees figure! Dumb kid!

I still have a copy of the advert that alerted me to the existence of this sexy beast, and as you can see, these model kits were fucking exciting items to be faced with in a time when figures and collectables based on the horror icons simply weren’t being made! 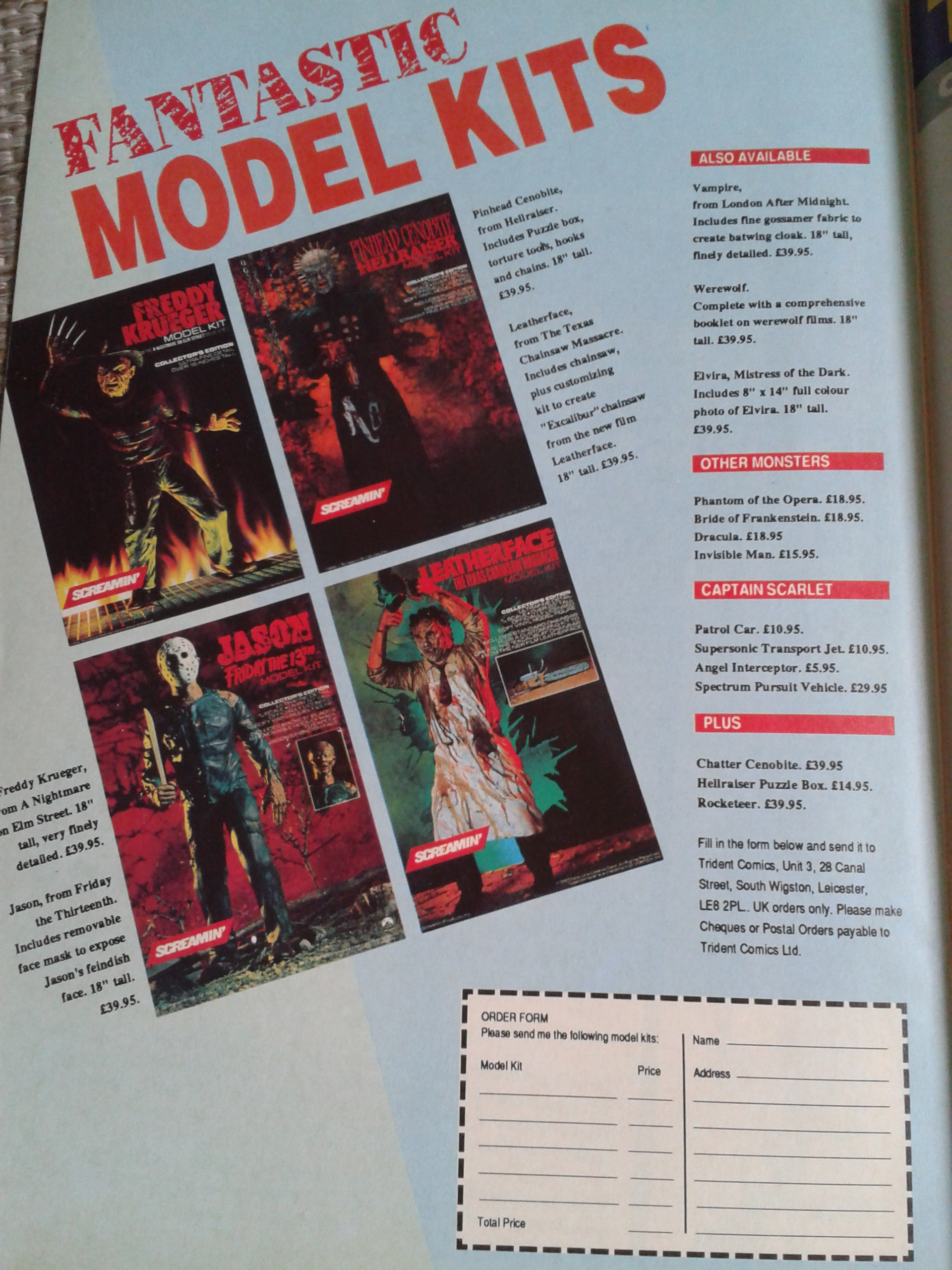 The same Christmas I got my mini Jason, my older brother was becoming interested in photography, so my parents bought him a VERY expensive camera with different lenses, filters, a tripod and a chunky bag to carry everything in. At some point in time he must have taken a picture of my partially completed killer, had it developed as a color transparency slide instead of a photograph, and just stored it away at my parents house. There it sat in the darkness until a few days ago when I pulled out a small box containing the slides and started holding them up to the light one at a time to see what memories had been captured, and there he was … my badly painted Jason! Holding his cardboard machete blade and looking annoyed that I had filled his hollow legs with cement, and was delaying painting his face because I KNEW I didn’t have the skills to make it look good. 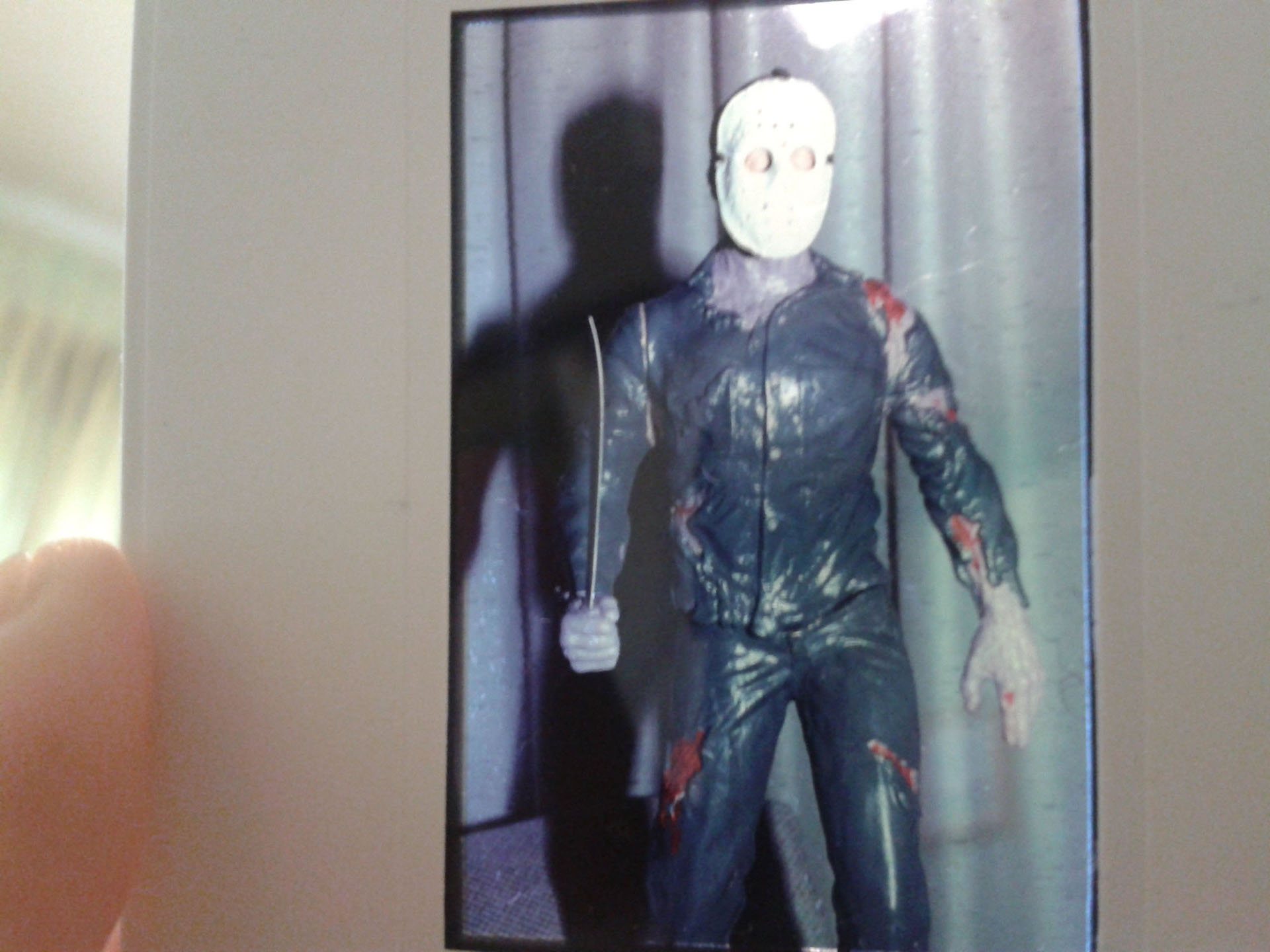 I don’t know how and when I lost him. Chances are my ruthless mother just threw him in the trash after I moved to London for 18 months when I was in my early 20s. Life was hectic at that time, and I remember noticing that many of my childhood possessions were missing when I returned, but I just didn’t have the motivation or energy to get angry about it. I had entered that zone between childhood and adult nostalgia where you don’t really care about the stuff that excites you. All I wanted to do was get drunk and meet girls.

Jason stood alone on a shelf in my bedroom for years, then he was introduced to the inside of a trash bag by a small Scottish woman who hates horror.

I’m sorry big guy, this post is for you.

The slide did more than just remind me of this early moment in my horror loving life. It reminded me that my brother was already a cool dude back then, who would photograph ANYTHING that wasn’t moving. And it reminded me that I was bloody lucky to have parents who would buy me something like that in the first place!

One day I’m going to save enough cash to buy this model one more time. And this time he WILL get the love and protection this miniature serial killer deserves and I’ll probably display him next to the slide of his long lost comrade.

Damn it, I AM getting misty-eyed after all …