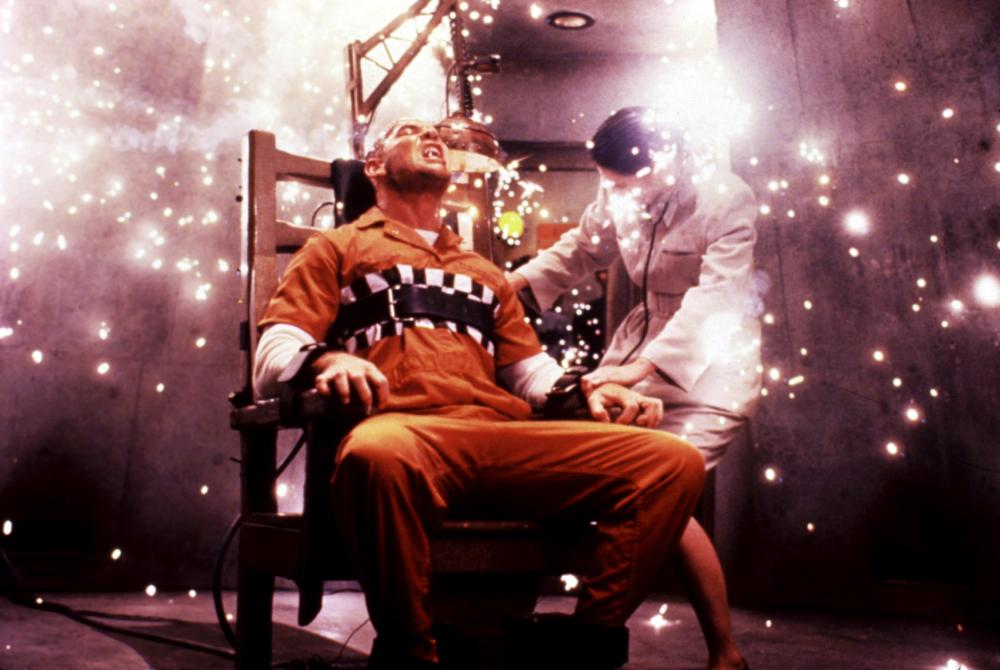 By the end of the 1980s, Wes Craven had woven his name directly into the fabric of popular culture, firmly solidifying himself as a true master of horror. He shocked and horrified audiences with his debut feature, The Last House on the Left, and then single-handedly revitalized the genre with his crowning achievement, A Nightmare on Elm Street. But he had one more left in him, before the 90s took over.

Released in 1989, and both written and directed by Wes Craven, Shocker starred Mitch Pileggi as Horace Pinker, a sadistic television repairman with a nasty limp. Caught by police (with the help of a particularly ballsy athlete name Jonathan Parker), Pinker is sent off to the electric chair, though a botched execution makes him more powerful than ever – able to swap his soul into any new host body he sees fit.

Before Scream came along and kept Craven busy for a handful of years, Shocker was – according to most involved – intended to kick-start a franchise of its own, giving rise to a brand new horror icon that would (hopefully) be ranked right up there with the greats. Unfortunately, the critical reaction to Craven’s creativity was this time quite poor, and the box office take did not justify those plans coming to fruition.

Horace Pinker is quite clearly a villain directly inspired by Freddy Krueger, and at times it almost seems like Craven is poking fun at the joke Freddy had become in Elm Street‘s sequels – by 1989, four of them had already been released. Like Freddy, Pinker is a sadistic slasher who makes a supernatural return after he’s murdered, and he’s rarely opening his mouth when not spouting deliciously corny one-liners.

Why then did Pinker fail to catch on with audiences, the way Freddy Krueger did just a few short years prior? You could make the argument that the slasher sub-genre had waned in popularity by the time Shocker was released, despite Craven himself re-animating that tired formula in 1984. And though you wouldn’t be wrong in saying that, the truth is that Craven’s final film of the 1980s is a supremely hot mess.

With a sluggish start – it’s over 30 minutes before Pinker is even sent off to the electric chair and turned into a true slasher villain – and a wacky plot that is much more silly than scary, Shocker is an oddball curiosity at best, admittedly much moreso today than it was in its year of release. I say this because the effects, which were probably somewhat acceptable back then, are downright laughable in the present.

But the beauty of Wes Craven, as is wonderfully on display in every outlandish moment of Shocker, is that even his failures have more going for them than most filmmakers’ successes. Craven was never one to go with the grain and make the movies others were making, always blazing his own path and injecting bold new life into the genre. With Shocker, love the film or hate it, no one can deny he did just that.

Packed with no shortage of creativity and brought to the screen with boundless enthusiasm, Shocker is one hell of a weird movie, quite unlike anything else that was being made at the time. And if Craven failed at his goal of turning Horance Pinker into the next great horror icon, he admirably failed with the same sort of gusto and unfiltered imagination that made him a horror master in the first place.

One need only look at the infamous park sequence to see just how much genuine inspiration is on display in Shocker. Pinker, in the body of a cop, chases Jonathan through a park, in the process swapping his energy into the bodies of no less than four others. The killer’s essence at one point enters the body of a young girl, who curses and drives around a bulldozer in what is easily the film’s most memorable scene.

There’s a raw energy (quite literally) to Pinker’s body-swapping technique, and the overall mythology makes him one of the most unique slasher villains of all. The fun Mitch Pileggi has with the role is palpable, chewing the scenery and gleefully delivering the most (intentionally?) awful one-liners in the genre’s history. Like Craven, Pileggi really went for it, and his performance is so much fun to watch.

When most horror fans think of Shocker, they think not of the first or even second act, but mostly of the outrageously bonkers final 20-minutes. Toward the end of the film, Pinker finds a way to literally jump inside of a TV set, and he and Jonathan engage in an epic final battle that takes place across the night’s programming – which includes an episode of Leave It to Beaver and even 1931’s Frankenstein.

The sequence embodies the sort of zaniness normally reserved for the Elm Street sequels, and if Craven wasn’t taking a jab at those movies, he was definitely making a comment about the all-consuming nature of the almighty boob tube. He literally turned America’s greatest obsession into a horror villain, and even if he didn’t make us all scared to turn on our TVs, the attempt was both clever and admirable.

Slasher films were on their way out by the time Craven attempted to give rise to a new icon, and while the sub-genre as a whole was teetering on the ledge, Shocker at least took it in a wildly different direction – to the point that the film isn’t even immediately recognizable as a slasher. With a rocking soundtrack, a male ‘final girl,’ and a whole lot of personality, the attempt begs to be respected.

In the court of public opinion, Shocker may have been a failure. But if Wes Craven was going to fail, he was going to fail spectacularly. And if that’s not the true sign of a ‘master of horror,’ then I don’t know what is.