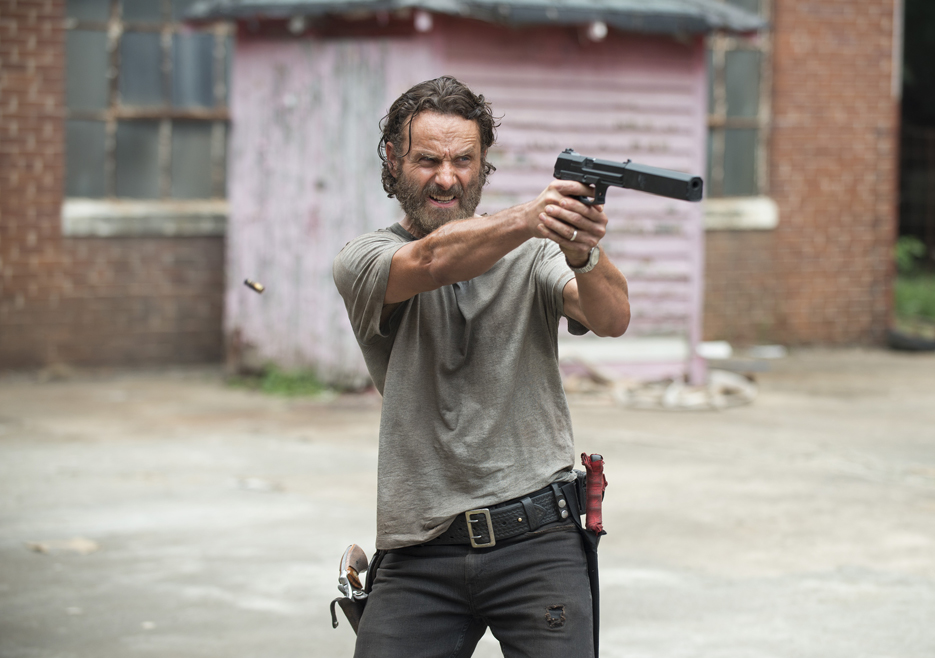 After three weeks of side stories, all of them finally came together on this past Sunday night’s episode of The Walking Dead, which essentially picked up right where each of those episodes left off.

‘Crossed’ was another filler episode before the impending mid-season battle, though a handful of important things went down…

Though Rick was all about storming the proverbial castle, killing everyone in sight and saving Beth & Carol, both Tyreese and Daryl agreed on Plan B: kidnapping a couple of the hospital’s finest and using them as bargaining chips to get their friends back.

Using Noah as bait, Rick and the gang indeed went through with Plan B, catching two of Grady Memorial’s police officers off guard and holding them hostage. The plan didn’t go off without a hitch, however, as the cavalry soon showed up, guns blazing. Thanks to the distraction, the two hostages managed to escape, though their freedom was only temporary.

Against a backdrop of melted and mutilated zombies, Daryl engaged in a pretty epic fight with one of the hospital’s guards, gaining the upper hand by sticking his fingers into the eye sockets of a zombie, ripping its head off and using it as a weapon(!!!). Showing up at just the right time, Rick almost put a bullet in the cop’s head, but Daryl convinced him that three hostages are better than two.

After Noah informed the gang that one of the cops was trustworthy, they let their guards down a bit, which of course proved to be a bad idea. Revealing that his name was Bob, the cop immediately gained the trust of an emotionally wounded Sasha, and he just as quickly betrayed that trust by slamming her head into a window and making his great escape.

Sigh. This show keeps making me wish that Shane was still around, because he’d never make the mistakes the other characters keep making. I get that they’re trying to resolve issues peacefully and hang on to the last shreds of their humanity, but the time for diplomacy passed long ago, and it’s incredibly frustrating to see them STILL trusting strangers and STILL trying to act civil.

Plan A was the right plan, Rick. Peaceful resolutions are no longer an option.

Over at Grady Memorial, Beth overheard one of the officers telling Dawn that they should save their resources and let Carol die, which prompted her to pipe in and suggest otherwise. Though Dawn told the cop that he was right, she told Beth otherwise, giving her the keys to the medicine cabinet and instructing her to save Carol.

Using a strawberry-loving old dude as a distraction, Beth was able to get her hands on the medication needed to give Carol a fighting chance, and she managed to inject it into her without anyone noticing. Though Carol was completely unconscious, Beth held her hand, and let her know that she was there with her.

Maybe it’s just me, but I’m having an incredibly hard time wrapping my head around the inner workings of Grady Memorial. It’s hard to tell who is actually in charge, and I still can’t seem to figure out why it’s being portrayed as such a bad place. Dawn, in particular, is almost impossible to read, and I’m not yet sure if that’s bad writing or if her motivations are purposely being kept in the dark.

On the whole, the hospital storyline just hasn’t really been working for me, and again I can’t help but wish that the Terminus gang had been kept around until the mid-season finale. I’ve found it hard to become invested in the intensity of this rescue mission, as it seems like Beth and Carol are being rescued from a place that’s pretty damn… safe.

While Maggie spent the episode trying to convince Abraham to get over himself and get up off his knees, Glenn went on a little fishing trip with Rosita and Tara. The trio built a water purifier and a fishing net out of found supplies, including the jackets of nearby zombies, which made for a nice series of scenes that weren’t about threats – either human or undead – but rather about survival.

One thing The Walking Dead has been doing really well this season is expanding the scope of the apocalypse, taking us into a major city and showing the day-to-day survival tactics of the survivors. Earlier in the season we saw book binding thread being used to stitch a wound, and it’s scenes like that one and the fishing excursion that really help sell the fact that survival is a nonstop challenge for these characters, regardless of the zombie threat.

If the world really went to shit, the lucky survivors would indeed spend the majority of their time doing things like fishing and trying to turn found objects into life-saving devices, and I love when The Walking Dead takes the time to show us scenes like that. Though they may not seem important, they add a whole lot of realism to the proceedings.

I’m not sure how or why Father Gabriel is still alive but he is, though likely not for much longer. While Rick and friends went on their rescue mission, Michonne, Carl, Judith and Gabriel stayed behind at the church, where Gabriel tried – in vain – to scrub all that Terminus blood off the floor.

His church no longer a place of worship, Gabriel decided to hightail it out of there, using a machete to pry up the floorboards and escape the once peaceful building. On the outside, it wasn’t long before he encountered a female walker, and after bodyslamming her onto a tree stump, he spotted a cross around her neck and found himself unable to deliver the death blow.

Again I ask: How the hell has Gabriel made it this far, with his ‘kill no walkers’ mindset?!

At the end of the episode, Eugene finally woke up from his punch-induced slumber, at right around the same time Abraham seemingly found the purpose of continuing on. Not much more to say about this one, as we still don’t know what kind of condition Eugene is in nor do we know why Abraham decided that life is still worth living.

Hell, Eugene could’ve woken up as a zombie, for all we know. Sure sounded like he had turned, didn’t it?