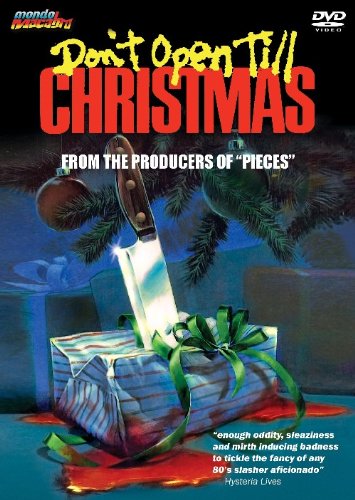 By the time 1984 rolled around, Christmas was well on its way to carving out its own little niche in the horror genre, thanks to films like Black Christmas, To All a Goodnight and Christmas Evil. But it wasn’t until the ’84 holiday season that Santa Claus truly became a horror icon, when Silent Night, Deadly Night was unleashed upon the outraged masses.

That very same year, just one month later, another holiday horror film was released, to very little fanfare. A UK production, Don’t Open Till Christmas turned Santa Claus from villain to victim, setting the film apart from the many Christmas-themed slashers that came both before and after it.

Set in London, the film centers on a masked killer who is targeting anyone and everyone dressed as Santa Claus, beginning with a father who dons the fluffy white beard for a party. As the body count quickly rises, it’s up to the man’s daughter and inspectors from the Scotland Yard to find the killer, before he disappears for another year.

In the sub-genre of Christmas horrors, there are films that are good and films that are only for the true completists, and Don’t Open Till Christmas is the best example of the latter that I can think of. In a landscape filled with killer Santa movies, actor Edmund Purdom’s sole directorial effort is nothing if not noteworthy, the sort of curiosity that should be watched by all fans of Christmas-themed horror films, at least once.

Unfortunately, the concept of Don’t Open Till Christmas is the only thing this turkey has got going for it. While the idea of a Santa-targeting killer is no doubt alluring, the execution is piss poor to the point that the film is barely watchable. The production was riddled with behind-the-scenes issues and every one of them shows in the finished product, which is clearly the work of filmmakers who simply didn’t know how to make a movie.

While all of that admittedly sounds great, the truth is that the kill scenes comprise a very small portion of the 86 minute runtime. They’re randomly interspersed between scenes of mind-numbing boredom, and everything else about the movie is so bad and unfun that even a blood-pissing Santa doesn’t do much to help make it watchable. Again, it’s a fun idea, as well as an original one, but a good idea unfortunately doesn’t make a good movie.

If there’s anything else even remotely worth noting about Don’t Open Till Christmas it’s that it doesn’t quite play by the slasher rules, killing off the ‘good girl’ main character well before the end credits and keeping the ‘bad girl’ alive until the very end. Unusual for a movie of this sort, it’s a prostitute who ends the (painfully obvious) killer’s reign of terror and becomes the heroic ‘final girl,’ not to mention the victims are almost entirely male. Not saying the film is worth praising cause of that, but it’s at least worth noting.

I suppose I should also mention the film’s oddball score, which alternates between creepy renditions of Christmas classics and John Carpenter-inspired synth music that sounds like it was ripped straight off the Halloween 3 soundtrack. The score works, at times, but it doesn’t work a whole lot more often than it does. So yea. There’s that.

Don’t Open Till Christmas is one holiday horror film that should be opened only by those with a curious desire to see Santa get maimed in various different ways. For all others, there’s simply not enough time in December to watch all the Christmas horror movies that should be watched, so you’re better off putting this one on your naughty list. There’s a compilation video of the kill scenes on YouTube. Watch that instead.

I’d actually love to see someone come along and remake Don’t Open Till Christmas, because it’s precisely the sort of film that remakes are meant for. Digging into the mind of a guy who wants to kill Santa Claus could be really interesting, as could the idea of Christmas being put on hold in a small town, for fear of the killer striking again. None of those ideas were explored in this stinker, leaving ample room for remake potential.

So how bout it, Hollywood?!