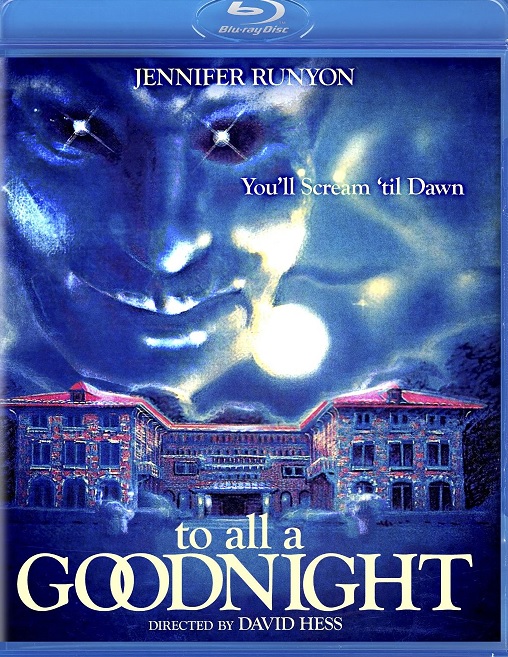 There are a small handful of holiday horror movies that have become synonymous with the Christmas season.

To All a Goodnight, despite being a pioneer of the sub-genre, isn’t one of them.

Predating Silent Night, Deadly Night by four years, and coming out several months prior to Christmas Evil, To All a Goodnight is the first feature film to center on a killer Santa Claus.

Yes, Amicus’ Tales from the Crypt anthology had a sadistic Kringle in it, but it wasn’t until 1980 that a killer Santa became the star of the show.

Originally released on January 30th of 1980, To All a Goodnight is also notable for being the one and only directorial effort of the late David Hess, who is most known for playing Krug in Wes Craven’s Last House on the Left. A critical flop, the film was up to this point only available on VHS, resulting in it becoming somewhat of a ‘lost’ piece of holiday horror cinema.

That all changes this year, as Kino Lorber has finally given some home video respect to Hess’ forgotten film. October 21st marked the DVD and Blu-ray release of To All a Goodnight, hitting both formats for the very first time. And just in time for Christmas!

Though I’m somewhat of a connoisseur of Christmas-themed horror movies, I must admit that I hadn’t seen To All a Goodnight until the disc arrived on my doorstep today. I’ve owned the VHS tape for years, and I’ve watched clips, but for whatever reason it just never found its way into my annual holiday viewing rotation.

Kicking off with perhaps the most lazy backstory in the history of horror, To All a Goodnight is 80s Slasher 101, centering on the residents of the Calvin Finishing School for Girls. Two years after one of the girls falls to her death, during a prank, a killer in a Santa suit begins stalking the current residents, decorating the halls with chunks of bodies.

Perhaps the most interesting little factoid about the film is not that it predates Silent Night, Deadly Night but rather that it also predates another slasher classic: Friday the 13th. Plenty of 80s slashers directly copied the Friday the 13th formula and though To All a Goodnight seems to be just another one of those movies, the truth of the matter is that it was released a full four months prior to Mrs. Voorhees’ reign of terror.

Not only is the general setup the same but even the kills are seemingly ripped straight out of Friday the 13th, which include a decapitation, a brutal throat slit and an axe to the face that plays out almost exactly as it does in Friday. And believe it or not, there’s even a crazy dude named Ralph who tries to warn the soon-to-be victims of their impending doom. Yes, his name is Ralph. And he’s crazy.

As for the finale, well, let’s just say that I’d be shocked if someone didn’t somehow steal from someone here – even if it seems impossible, given the two movies were released mere months apart.

While the real joy of the film is the pretty damn remarkable fact that it predates two slashers that are often credited with pioneering certain aspects of the sub-genre – and yet, never gets any credit for it – To All a Goodnight is also jam-packed with oddball charms that are all its own, which serve to make it an amusing watch – if nothing more.

For one, it’s one of the most sexually charged slasher films I’ve ever seen, which is saying something considering slashers are known for their abundant sexuality. It’s almost admirable how deeply committed the film is to making sure you know that most of the characters are stereotypical slasher victims, as the absolute only things they have in mind are sex and booze. And sex.

Their minds so warped by their carnal desires, the characters express no concern whatsoever about their friends going missing, and their loyalties to one another last as long as their sexual encounters. The young ladies are particularly promiscuous, nearly all of them entertaining at least two partners over the course of the film. They all swap lovers like it’s going out of style, almost to the point of slasher parody.

Interestingly enough, amidst all the sex and mayhem is actually a pretty cute little love story, between virginal good girl Nancy (Jennifer Runyon, in her film debut) and Alex, the film’s resident nerd. Alex is one of the more interesting characters in slasher history, one who doesn’t feel nearly as stereotypical as his friends and seems to defy the sub-genre’s conventions.

Though he’s the nerd, Alex is also the biggest pimp in the film, and while you’d expect he’d be knocked off early on, he actually ends up becoming a badass hero. I’m not saying that Hess and company were purposely trying to go against slasher norms with the character, especially since those norms hadn’t really yet been established at the time, but it’s nevertheless interesting to note how unconventional the character is.

Another noteworthy aspect of this early slasher effort is its relatively strange construction, taking place over two nights rather than the usual one. At the 40-minute mark, the film cuts to morning, and it’s a good 20-minutes before the sun again goes down and Santa comes back out to play. It’s not the best idea, but it’s one of many unusual decisions that make To All a Goodnight feel like a unique experience.

Ultimately, it’s a fairly cut and dry slasher film, but I can’t help but respect it for being the first of its kind when it comes to Santa slashers, and also for doing a lot of things that hadn’t yet become tropes of the sub-genre. If for no other reasons than those, To All a Goodnight is worth being out there for us horror fans to check out and appreciate.

Considering I had previously only seen clips of the film from the VHS tape, which was so dark that it was hard to even tell what was going on, I have a particular fondness for the transfer Kino Lorber has brought to the table with this disc. After all these years, you can actually make out what’s happening, which is a beautiful thing. So this release gets an A+ in that department, from me.

As far as special features are concerned, there are actually a few on here, which is quite surprising. Given the lack of fan interest in the movie, I was sure they wouldn’t bother filming any bonus features, so I was delighted to discover a full 35-minutes of brand spankin’ new interview footage on the disc.

About 10 minutes is given to each of the three interview subjects, which are stars Jennifer Runyon and Katherine Herrington, as well as writer/producer Alex Rebar. Intercut with random footage from the film, the interviews are fairly sloppy and unfocused, with too much time spent on questions about movies that aren’t To All a Goodnight. Go figure.

Still though, it’s nice to have the interviews on the disc, and Rebar provides some interesting insight into the production. He reveals that the film was shot in a mere 10 days, on a budget of $75,000, which explains many of the issues with the movie. He also notes that several different endings were shot, and it’s a bummer that those didn’t make it on the disc.

All in all, To All a Goodnight‘s Blu-ray is a must for anyone who’s as crazy about Christmas horror movies as I am, as well as for anyone looking to discover an 80s slasher that they might’ve missed. This is one of the first movies of its kind, in both regards, and I’m glad to see it finally getting its just desserts.

I only wish David Hess was around to enjoy the home video revival. You are missed, sir.