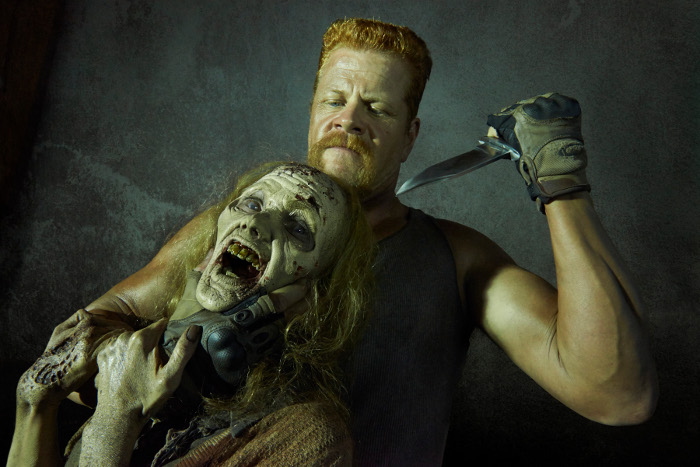 Whereas most of the things us horror fans watch start off happy and then take a turn for the horrifying, The Walking Dead is one show that wasted absolutely no time getting to the latter.

In the premiere episode, Rick Grimes woke up in a hospital bed and quickly discovered that the world had gone to shit, and the show has mostly been nothing but a series of horribly depressing events ever since.

I guess what I’m saying is that there hasn’t been much room for levity or humor on The Walking Dead over the years, given the post-apocalyptic, zombie-infested nature of the proceedings. At least there wasn’t, until we met a dude with a pretty serious mullet…

While the previous week’s episode centered on Beth’s whereabouts, last night’s was all about Abraham and Eugene, and it was a surprising departure from the usual bleakness of The Walking Dead. Oddly enough, it was pretty damn humorous and entertaining, which was nice to see after last week’s yawn-inducer.

We dig deeper into the episode this morning, as we take a look at five notable things that happened in ‘Self Help’!

The episode kicked off with the church bus crew headed to Washington, Abraham driving while Eugene, Glenn, Maggie, Tara and Rosita goofed off in the back. When pressed by Glenn, Eugene insisted that he loves his greasy mullet and doesn’t plan on ever cutting it, as he feels it makes him look ‘fun.’

Only 15 miles away from the church, something went wrong with the bus, and it ended up going airborne and crashing onto its side. Of course, nobody inside was hurt, but the impending zombie threat meant that they had little time to compose themselves and get the hell out of dodge.

Since a horde of walkers was attracted to the sound of destruction, this oddball little sub-group had to fight them off as soon as they exited the bus, and a whole lot of CG-aided mayhem ensued. In the scuffle, Eugene was forced to stick a knife in a zombie’s back, which if I’m not mistaken is the first time he’s ever done anything but look goofy and say goofy things.

2) EUGENE REVEALED THAT IT WAS HE WHO SABOTAGED THE BUS

After the bus crash, the gang holed up in a bookstore, where Abraham and Rosita got it on. For whatever reason, Eugene creepily watched on as his buddy did the nasty, and he probably would’ve started fapping if it weren’t for Tara interrupting his pervy escapade.

Presumably because he was totally embarrassed and wanted to change the conversation to something much more serious, Eugene revealed to Tara that he was responsible for the bus crash. He didn’t want to leave the church, you see, and so he fed pieces of glass into the gas tank, prior to the group’s departure.

The plan was for the bus to die before they ever got moving, but of course things didn’t quite work out that way. Tara gave Eugene a verbal slap on the wrist over the fact that he almost killed them all, chastising him the way a mother would yell at her son for feeding his veggies to the dog.

Goddamn, this episode was strange.

3) EUGENE DEMOLISHED A HORDE OF WALKERS WITH A FIRE HOSE

‘Self Help’ became a full on horror-comedy when the bumbling gang came upon a fire truck, Abraham deciding it to be their new ride. Only problem was that the innards of the vehicle were so clogged with zombie guts that it didn’t work. Oh, and the firehouse was full of undead firefighters.

As the walkers flooded out of the firehouse, Eugene sprung into hero mode and headed to the top of the truck, unleashing torrents of water into the zombified crowd. What ensued was a solid 45 seconds of Eugene dismembering a dozen zombies with… water… which needless to say was a true sight to behold.

The powerful stream of water blew off their limbs and went through their heads like a hot knife through butter, and though it makes little sense that these zombies pack a powerful bite and yet have heads as soft as rotten pumpkins, such logic need not apply in a scene so awesome as this one.

Just to reiterate: Eugene, the goofy dude with the mullet, killed a bunch of zombies with a Super Soaker. I mean come on. How can you not love that?

The fire truck broken down and THOUSANDS of zombies in the direct path to Washington, Eugene finally caved in and laid all his cards out on the table, admitting that he’s not actually a scientist. ‘I’m a smart dude,’ Eugene basically said, ‘but I can’t save the fucking world.’

Naturally, Abraham was none too happy about the reveal, and he unleashed a flurry of Tyson-like punches on his buddy’s face. After one last solid hit, Eugene took a face-first dive into the pavement, leaving us to wonder if a death blow had been delivered.

Of course, there was nothing surprising about Eugene’s confession, as it was pretty clear right off the bat that the mullet-headed weirdo wasn’t a genius scientist. In fact, the only thing surprising is that the writers decided to make a full-fledged storyline out of the lie BEFORE it was revealed that it was indeed a lie, as it was taken to a point where it seemed impossible that the driving force of the season would turn out to be a sham.

But hey. This just means (most likely) that all the characters will be getting back together in the very near future, and I’m always all for that.

5) WE GOT A GLIMPSE INTO ABRAHAM’S DEPRESSING PAST

This being an episode mostly about Abraham, through Eugene, we were treated to a handful of quick flashbacks throughout, giving us our first real glimpse into his past.

At some point in the past, Abraham killed a bunch of dudes at a supermarket, an act that so terrified his wife and two young children that they left him. Shortly thereafter, Abraham discovered that his family didn’t make it very long on the outside, and he was seconds away from killing himself when Eugene entered his life.

Running away from a small group of walkers, Eugene begged Abraham for help, and Abraham responded by killing the zombies and saving him. This is the point where Eugene told the lie that he was a scientist, that lie giving Abraham a new purpose in life – thus, why he’s so heartbroken that the lie was a total lie.

The goofiness of the episode aside, it was nice to learn more about Abraham, as he’s thus far been a fairly one-dimensional character. In fact, I admittedly never saw him as a human being so much as a military action figure, and last night’s character development is only going to make the show stronger as a whole, going forward.

I’m not sure ‘Sure Help’ was the greatest episode of The Walking Dead but it was definitely an entertaining hour of television, providing more laughs than every other past episode combined. Of course, laughs aren’t what we watch this show for, but the oddball tone of the episode just seemed to perfectly fit the group being spotlighted.

Rick’s group has serious, badass episodes. Beth has boring, uninteresting ones. And Abraham’s has weird, goofy ones. Sounds about right to me!

Next week: Daryl and Carol chase after the hospital gang, and we find out how Carol ended up being wheeled into the hospital on a gurney. An undercover mission, in an effort to infiltrate? We can only hope.

And wait a second… whose body is Daryl tossing into the fire, at the end of the episode preview?!