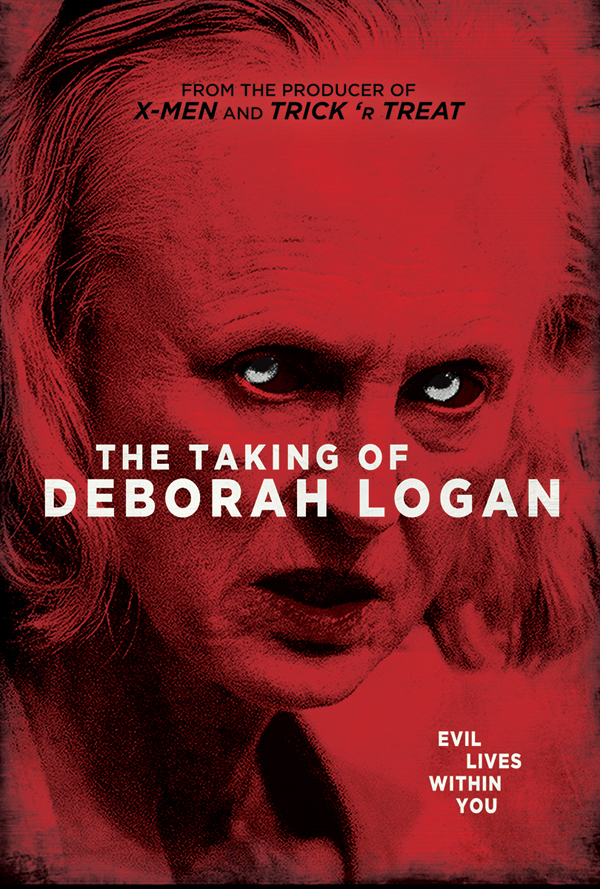 This past Tuesday saw the DVD release of The Taking of Deborah Logan, which marks the directorial debut of Adam Robitel. Oddly enough, it had already hit Netflix’s instant streaming service by that point, proving that those of us with a membership have truly got it made.

In the film, which is of that beloved found footage variety, a small documentary crews travels to the home of a woman in the early stages of Alzheimer’s, in an effort to tell her story and chronicle the cruel warpath of the disease. Almost as soon as they arrive, the woman’s condition takes a turn for the worse, and it becomes clear that a mental illness isn’t the only thing she’s contending with.

If you’re a regular reader of my reviews you’re by now aware that I’ve become pretty tired of the paranormal and found footage sub-genres, as both have been done to death in recent years. Theatrically released horror films, in particular, have become painfully generic and by the numbers, and it’s gotten to the point where I feel like I just keep watching the same movie over and over again.

Thankfully, there are filmmakers out there like Adam Robitel who clearly feel the same way, and have taken it upon themselves to give us fans a better product. And like James Wan before him, Robitel realizes that you don’t necessarily need to bring boldly innovative ideas to the table in order to do so. With Deborah Logan, he certainly doesn’t reinvent the proverbial wheel, but goddamn does he spin it well.

I’ve always said that the POV style isn’t the problem, but rather the way that style is misused in so many films, and this one uses it a whole lot better than most. Though the dreaded ‘shaky cam in the dark’ comes into play in the latter portions, Deborah Logan for the most part feels like a conventional film, despite the fact that it’s conveyed through both handheld and stationary cameras. It’s ‘found footage’ without being obnoxious about it, I guess is the best way to put it.

Like all the best movies of this sort, Deborah Logan feels authentic to the point that it’s oftentimes easy to forget you’re watching actors playing parts, and much of that credit must be given to the stellar cast. Playing the titular character’s over-stressed, alcoholic daughter, Anne Ramsay is absolutely terrific, her performance helping to ground the film in a whole lot of believable reality.

As for Deborah Logan herself, that’d be veteran actress Jill Larson, who turns in perhaps the most memorable performance of this year’s horror output. With little makeup and no CG-enhancements, Larson is one of the most convincing possessed characters in the genre’s history, and it’s she who is responsible for much of the film’s effectiveness and creepiness. Larson is as terrifying as Regan MacNeil, and her head need not spin around to give you nightmares.

In many ways, The Taking of Deborah Logan is admittedly a story we’ve seen before, and many tropes of the sub-genres it inhabits are present. But it’s almost because of these things, rather than in spite of them, that the film is so impressive. By presenting familiar ideas and moments in a bit of a different way, Robitel reminds that it’s the execution that makes or breaks a movie, and nearly everything in his debut feature is executed in such a way that it never feels tired or generic.

The Taking of Deborah Logan is at its best when the lines are blurred between mental illness and possession, and thankfully those questions are left unanswered for much of the runtime. Though the script ultimately heads into expected and familiar territory, it never goes too far down the path of possession, which was nice to see. Most of these movies suffer from showing us too much, and when Deborah Logan does decide to do that, it’s ‘too much’ in the very best of ways.

I of course don’t want to spoil anything but holy shit. There’s a moment toward the end that’s one of the most terrifying in recent years, and I can guarantee you’ll know exactly what I’m talking about once you see it. When this movie is scary, it’s really freakin’ scary, and not in that jump scare sort of way.

All in all, The Taking of Deborah Logan does a whole lot more right than it does wrong, and is in my opinion one of the best movies of its kind, both this year and for the last several years. It’s quite frankly criminal that it didn’t get a theatrical release, because it’s better than any horror movie released into theaters this year and likely would’ve been a huge box office hit.

Can’t help but feel that somebody behind the scenes dropped the ball with this one, but their financial loss is our gain. Rather than having to pay $12 to see it, The Taking of Deborah Logan is available for instant streaming on Netflix, and I highly recommend you give it a stream.

Just don’t blame me for the nightmares.