Though Freddy Krueger has appeared in a grand total of nine films since bursting onto the scene 30 years ago, there are still several that were either proposed or planned, but never quite got off the ground – which is not a bad thing, in some cases.

Tonight, we take a look back at some of those ideas that we will never see play out before our Freddy lovin’ eyes, as part of our ongoing celebration of the burnt-faced demon’s 30th birthday.

So sit back, relax and enjoy this guided tour through the side streets of Springwood that we never got the chance to explore! 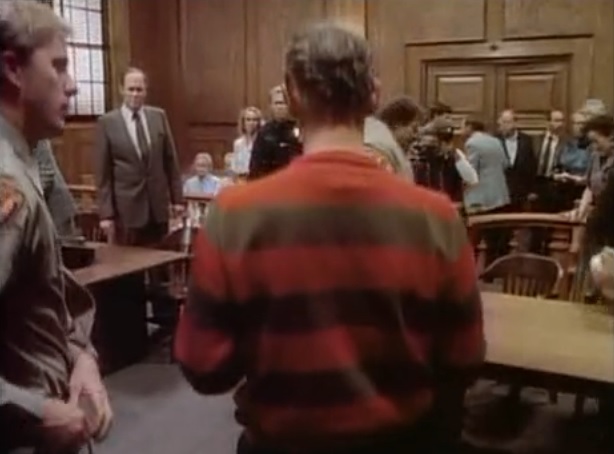 First Kills was to be a full-on prequel to the Nightmare On Elm Street series, starring Robert Englund as a pre-burn Krueger. A script was written for the movie, which saw Krueger making his first kills (duh!), as a human being, and followed him through various courtroom trials where sleazy lawyers continually helped set him free.

Eventually, the Elm Street parents rise up and take the law into their own hands, burning Krueger alive and ending his reign of terror once and for all. Of course, that act of vengeance only begins his true reign of terror, and the script saw the film ending with a burnt Krueger arriving on Elm Street, where the audience would know exactly what comes next.

Though Englund was 100% on board with the idea, the script never made its way off the page and in front of a camera. The closest that idea ever got to coming to fruition was in the kickass Tobe Hooper-directed premiere episode of Freddy’s Nightmares, which served as a prequel to the film franchise. It’ll have to do! 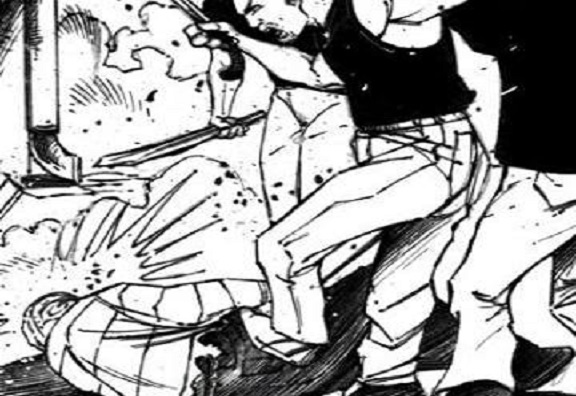 After the lackluster Dream Child, New Line had pretty much run out of ideas for Freddy. So they decided in the sixth installment that they’d kill him off. They figured if they promised the installment was truly going to be the end, and that Freddy would finally meet the true death in it, that the asses would be in the seats. But first, they needed a script.

Though multiple different writers were penning their own ideas for how to kill off Freddy in the planned final installment, the VP of New Line at the time had one man in mind for the job: Peter Jackson, who at that point had just come off of making Bad Taste & Meet The Feebles. And so Jackson penned a draft of a script called Dream Lover, which he co-wrote with Danny Mulheron.

Their basic idea was that Freddy had become a joke, much as he had in the franchise itself. In the script, kids were intentionally knocking themselves out with sleeping pills, so that they could enter the dream world and essentially kick the shit out of Freddy. With nobody fearing him anymore, Freddy had become a weak and decrepit old man, hardly scary or threatening. At some point in the movie Freddy was to muster up enough strength to kill one of those kids, which would give him the energy to start returning to his former self.

Writer Michael DeLuca was also writing a draft of his own screenplay at the same time, titled Freddy’s Dead, which is of course the script that New Line ultimately went with. 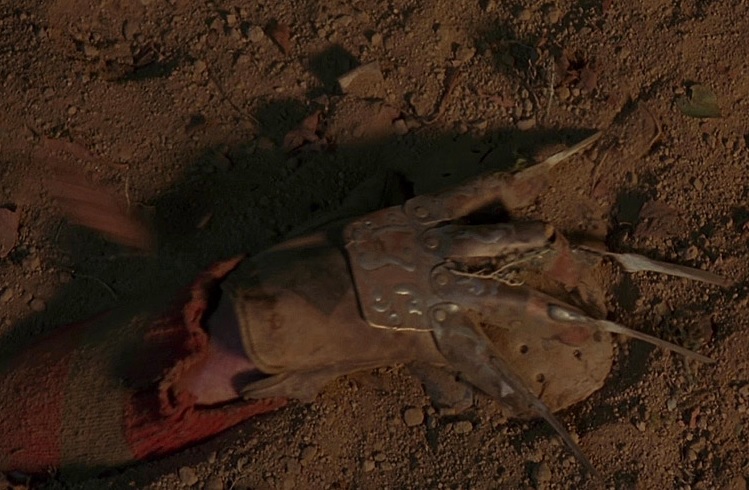 Hinted at in the last shot of Jason Goes To Hell, a Freddy vs Jason film was in the making long before it ever happened, with the fact that New Line didn’t own Jason being the only thing holding them back from actually going ahead with it. When the rights issues were finally worked out, there were reportedly nearly 20 different scripts being written for the epic battle to the death, one of which was titled The Millennium Massacre.

Written by Peter Briggs, the script was totally off the wall, full of mythical and pagan ideas and rife with bizarre attempts to tie the two franchises together. One of the main ideas was that Jason used to live on Elm Street, and was molested by Krueger as a child, and that the Voorhees parents were part of the lynch mob who killed Freddy. Seeking revenge, it was to be revealed that it was not only Freddy who drowned Jason, but that he was also the one who re-animated his corpse and essentially used him as a puppet to commit all of the murders that we saw him commit throughout the Friday franchise.

During the final battle between Freddy and Jason, Satan was to arrive and, through some sort of time travel business or some such nonsense, the existences of Freddy and Jason would both be completely erased from the world. The script was rejected, on the grounds that it would be too expensive to make. And, presumably, because it was batshit awful. 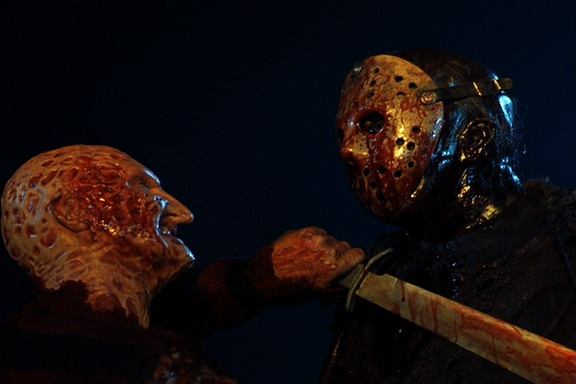 Another Freddy vs Jason script was written by David J. Schow, who had written the screenplay for Dream Child. Schow’s vision was that a cult of Freddy worshipers called the ‘Fred Heads’, who wore Christmas sweaters and even burnt themselves, decide to resurrect Freddy. Only, they have to sacrifice a virgin in order to bring him fully back to life. Naturally.

How does Jason come into the mix? Well, the older sister of the sacrificial virgin puts her dead boyfriend’s heart into Jason’s corpse, bringing him back to life to do battle with Freddy and save her sister. Again, naturally!!

Ultimately, these two and all other whacky ideas were thrown out the window when New Line realized that the fans just wanted to see a good old fashioned Elm Street/Friday the 13th hybrid, where Jason and Freddy kick each other’s asses. Plain and simple. So that’s what they went with and, at least in my opinion, succeeded in delivering. 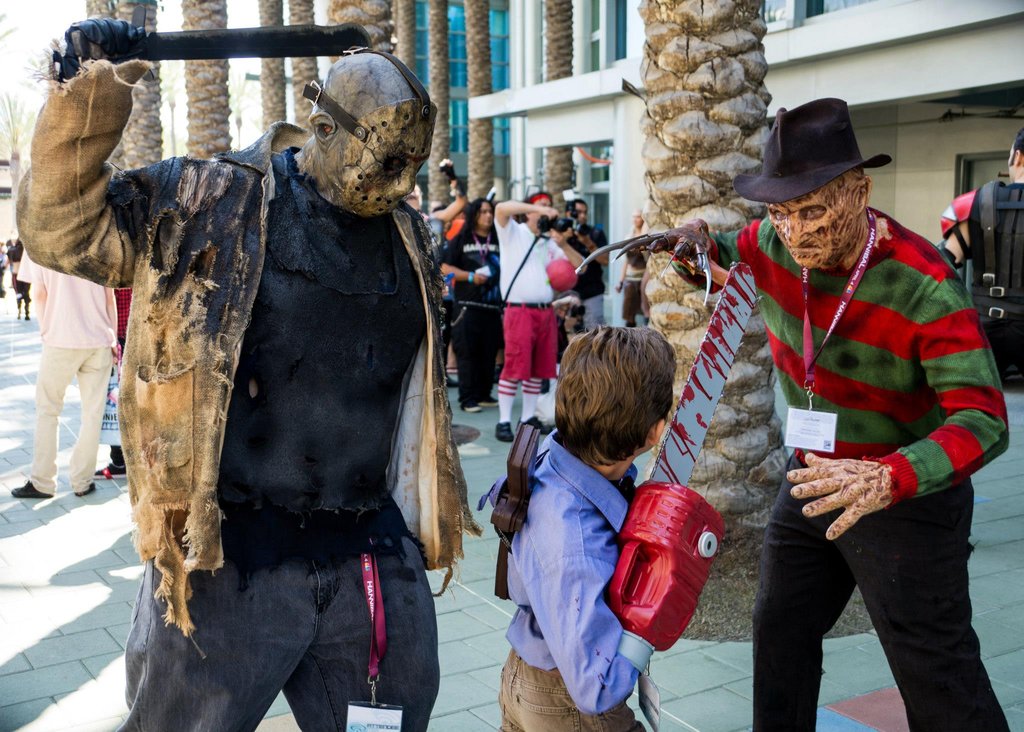 5) FREDDY VS JASON VS ASH

Ah, Freddy vs Jason vs Ash: the ultimate horror fan wet dream that we’re never actually going to see up on the big screen. But there was a time when a film that pitted those three icons against one another actually was a possibility…

A few ideas were tossed around for the film, with the most popular one seeing Freddy trying to get a hold of the Necronomicon, so he could use it to return to life bigger and badder than ever before. In the meantime, Freddy was going around possessing the kids of Elm Street so that they could kill Jason in their dreams, but of course Jason always wins.

With a whole lot of kids turning up dead on Elm Street, the parents hire a team of badasses to hunt Jason down, which is led by none other than Ashley J. Williams himself. Upon realizing that Ash has the Book of the Dead in his dreams, but not in reality, Freddy has to get inside Ash’s mind so that he can take it for himself and rise to power. Thus, the three end up duking it out.

A similar story ended up being used for the Freddy vs Jason vs Ash comic book series, which is unfortunately the closest we will ever come to seeing the three in the same place outside of horror convention cosplay gatherings. Fortunately though, that comic series is pretty awesome.

So, which of these proposed ideas do you dig? And which are you glad were aborted before they had a chance to stink up the franchise any further? Leave a comment and let us know!