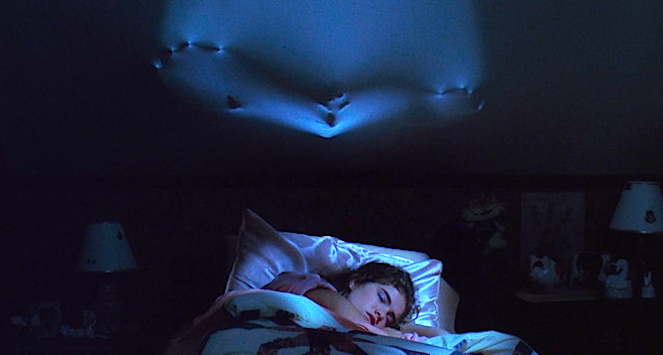 Putting together any kind of ‘favorite’ list is really just capturing a moment in time. 12 months from now choices might be different and new movies watched. So, at this point in history I hand you over to todays horror loving decision maker … Nathan Thomas Milliner.

I had a Q&A with Nathan a few weeks ago (here), and part of the process when I contacted him to request a chat was to research his work a little bit starting on facebook. We all know he is an incredible artist, but in the weeks since we communicated I’ve become an avid reader of his daily thoughts on movies across every genre. You can feel the passion he has for film in everything he writes and I was very keen to know which scary movies he personally considers to be the best.

“Horror in the 1990s was dying quickly and the slasher genre especially had become a joke with all of them going pretty much campy. Scream, to me was the ultimate love letter to the genre, a fan’s film. I do not understand some of the hate unless it is regarding all of the awful knock offs that followed it? Scream was one of the most entertaining films I can recall. I came out of the theater energized, at 2am! Smart, funny, well directed and acted, shocking and mysterious. The murder mystery in this film is one of the best I’ve ever seen. They do such a good job of throwing you off, telling you who the killer is and then making you doubt it again and again. Just when you think you know … you don’t. The movie is even scary at moments. Scream is the perfect date movie and arguably the best horror film of the 90s.”

“Scary and all of the above. Another of the great film makers in Kubrick gives us this haunted masterwork of horror. So what if it drops King’s material and makes its own? The film is so frightening and tense. Nicholson, an actor we are all familiar with and know is able to transform into one of the most horrifying characters ever! The music, the shot choices … the twin sisters! The Shining is the kind of master class horror film making I wish we had more of today. We need our top film makers to take a stab at big horror.”

“Often hated for its being called a ‘zombie film’ … well it is. In structure. There is no getting around that. It is helmed by another great film maker of his time in Danny Boyle. I feel this is the best directed and possibly written zombie film ever made. It brought the genre to reality. We can imagine this could happen to us and that elevates the fear and tension.”

“Maybe not universally considered a horror film but one of my favorites. What might keep this from being considered horror is that instead of showing us all of the gruesome details we are simply told about it or we only see the results of what has happened. Which leaves it to our imagination which will always trump what the film makers show us. It’s scary, disturbing and haunting. It has a stellar cast and is helmed by who I feel to be the best film maker of his generation, David Fincher.”

“Possibly the greatest terror film ever made. There is so much to love in this movie. From the great writing, direction and acting. You care about these folks and Spielberg knows how to tap into what makes all of us tick. The scene where Brody asks his son to give him a kiss because he “needs it” is one of my favorite movie moments ever. The Indianapolis speech is unreal. Quint is a real treat. Everything about it is pitch perfect. You cannot ask for a better film when you go to the movies. It was the arrival of the blockbuster. A shame all of them can’t be as good.”

Dawn Of The Dead.

“The best zombie film ever made. No question. The idea of living in a mall in the apocalypse is such a great idea and makes for a sort of fantasy film about death and the end of the world. The setting creates almost too much fun really. I think many of us can get into the fantasy of living in the mall where there is everything we’d ever want or need. Unlike the remake (which I like) this movie breathes. It is long, and we only get the four characters to bond with and we stay with them for a long time. At one point we are made to forget about the threat outside in fact, because Romero allows us time to get to know and care for the characters. It is THE QUINTESSENTIAL zombie film.”

“I saw this film before it hit the States thanks to an import DVD at a local ‘mom and pop’ shop of rare films … Had no idea what it was. I was blown away! Literally the most intense and suspenseful film I had seen in a very long time. Properly titled, the tension in this film is thick as hell. Aja is my favorite modern day horror film maker. His remake of The Hills Have Eyes is my favorite horror remake ever. High Tension just delivers on all levels in my book. Some hate the twist at the end but I never saw the film as literal, but the imagination of a very deranged and love sick woman.”

“Lightning in a bottle. I really feel like this movie just made itself, without any real control over the film makers. A movie intended to be a comedy becomes one of the most authentic and terrifying films ever put on celluloid. It feels real. It is shot and acted in a way that we are simply watching this unfold without anyone being aware that this is a film. Things are shot from a distance that kind of gives the feeling that we are around the corner with a camera, filming this real life nightmare. The score, the killers, It’s all so weird and creepy. I believe Chainsaw to be the ultimate horror film. I believe it to be the arrival of the modern American horror film. Last House took us into the real world of murder, but Chainsaw perfected it. It’s a fairy tale painted up as a true story.”

“It birthed the slasher film … Sure there were films that came before it that set the ground work but Carpenter’s film was the true arrival and opened the flood gates to imitators. I feel it is the best directed of the slashers. An amazing score, a slow burn that is beautifully shot, and that mask. How lucky are we that Wallace bought that Captain Kirk mask? Donald Pleasence was fantastic as Loomis. It captured what I remember loving about Halloween in the mid-west in the 70s and 80s. When I watch Halloween it feels comforting in a way because it takes me back to my childhood. (No, I never had a serial killer try to murder my babysitter when I was young.) But the feeling of fall, the anticipation of Halloween. Going out into those suburban streets at night dressed as ghouls and goblins. Perhaps John also being a Kentuckian was tapping into that familiarity that I grew up in.”

A Nightmare on Elm Street.

“It’s been my favorite since I was 12 years old. And the more I watch it today, the more I believe it to be a work of genius. I grew up in the slasher era so that is why I gravitate toward that subgenre and for me, most of the Halloween knock offs were just that, Halloween knock offs! But Nightmare was far more inventive and gutsy. The concept behind the film was just so unique and the killer, so much personality, an original weapon of choice and a wardrobe that should never have worked, but did. The film was scary and just has so many iconic scenes. The bathtub, Depp being pulled into the bed, Freddy coming through the wall, Tina in the bloody body bag and for me, Tina’s final nightmare is the best 10 minutes in horror.”

A HUGE thank you to Nathan for taking some time to be involved. To catch up on more of his thoughts and get the latest on his artistic work just head on over to his site, it’s well worth a visit. If YOU would like to feature and reveal a horror top ten then just message me below or on facebook and I’ll be in touch.