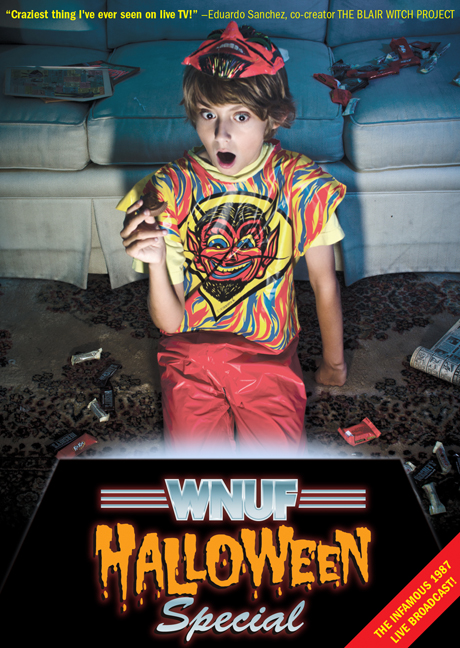 There are a handful of horror movies and television episodes that I consider must-watches every Halloween season, from John Carpenter’s Halloween to Halloween 3: Season of the Witch, Trick ‘r Treat to Roseanne‘s many Halloween specials. It just doesn’t feel like Halloween until I revisit festive favorites such as those, and this year I’m happy to add a new holiday horror gem to the annual rotation.

Released in 2013, and directed by Chris Lamartina along with a team of contributors, WNUF Halloween Special centers on a news broadcast that purports to have originally aired on Halloween night in 1987. The faux broadcast is presented in full, commercials and all, and it’s highlighted by a live investigation of the haunted Webber House, where a husband and wife were brutally slaughtered years prior.

From the marketing to the execution, WNUF Halloween Special is a gimmick movie through and through, designed to make you feel like you’re watching a VHS recording of a real Halloween special that aired on a local news channel back in the 1980s. And you’d be hard pressed to find a movie more deeply committed to its conceit, as this one is so authentic that you’ll have no problem buying into the ruse.

In addition to the special itself, which is essentially a found footage movie that feels more genuine than perhaps any other to date, WNUF Halloween Special‘s 80 minutes are filled out with both commercials and a news report that precedes the investigation. The whole film plays out like an appropriately grainy love letter not just to Halloween, but also to the inherent and utterly charming corniness of public access television.

It’s the commercials that really tie the whole thing together, and Lamartina and friends went all out to imbue WNUF Halloween Special with a realness that often makes you forget that what you’re watching isn’t, well, real. The commercials include a horror hotline, TV spots for fake movies, and political attack ads, to name just a few, and the amount of creativity on display in the faux ads is truly impressive.

A good portion of WNUF Halloween Special‘s runtime is spent on the various ads for local businesses, and though their initial charm may eventually wear off for some, those who “get it” are sure to admire just how fully the film embodies its concept. Past a certain point, it’s sometimes hard not to wish Lamartina had focused solely on the investigation, but it’s ultimately his commitment to the gimmick that makes the film so much fun.

Lamartina and the other filmmakers who pitched in to direct the commercials were truly in it to win it with WNUF Halloween Special, and the same can be said for all of the actors tasked with bringing the characters to life. Richard Cutting and Leanna Chamish are pitch-perfectly corny as newscasters Gavin and Deborah, and Paul Fahrenkopf is an absolute riot as reporter Frank Stewart, a truly loveable schmuck.

The cinematic equivalent of the coolest time machine ever, WNUF Halloween Special takes you back to a simpler time, and the film’s poster art is a perfect representation of the experience it delivers. Like the young boy depicted on it, the movie makes you feel like a kid again; dressed up in a plastic costume, munching on candy bars, and watching something spooky on TV. In so many words, it’s Halloween personified.

Countless horror films have come along in recent years and attempted to tickle the nostalgia bones of fans, playing on our collective love of childhood and attempting to recapture some of that magic, though few have accomplished that goal more admirably than WNUF Halloween Special. It’s presented with pure love on every single level, and there’s not a single moment where that love isn’t shining through.

Low-budget indie horror doesn’t get much more fun, creative, or nostalgia-inducing than this one. So pop some popcorn, turn down the lights, slide WNUF Halloween Special into your DVD player, and pretend it’s 1987 all over again. I promise you won’t have any trouble getting into the childlike headspace necessary to ensure that it will instantly become a new favorite Halloween tradition.