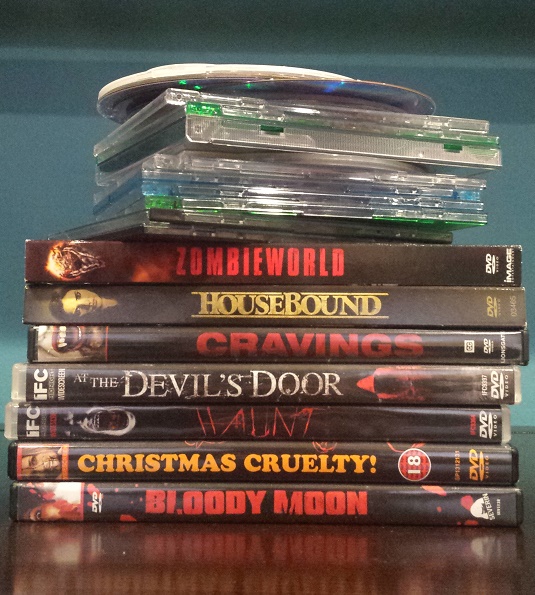 I’ll never forget the day I received my first big time movie review copy in the mail, commonly known in the film journalism field as a ‘screener.’ Less than a year after I started my blog Freddy In Space, a package showed up on my doorstep courtesy of Warner Bros., and inside was a DVD copy of the Friday the 13th remake’s so-called ‘Killer Cut.’

I had by that point in time amassed a respectable collection of screener copies, though they all came courtesy of unknown distribution companies and in some cases, indie filmmakers themselves. Needless to say, the fact that I had caught the attention of Warner Bros. made me feel pretty damn good, and I was over the moon about getting the chance to review the disc several weeks before its release.

But things change. People change. And in the years since that exciting day in 2009, my opinion on screeners has most definitely changed.

If you follow the social media accounts of writers here in the horror community, you’ve probably noticed that screeners have become somewhat of a bragging right. Bloggers are almost always eager to show off pictures of their latest screener arrivals, impressing their friends and followers by letting them know that they got their hands on a disc that isn’t yet available to the masses.

And that’s totally okay. I used to do it. In fact, I did it pretty often. And yes, you better believe that I tried to impress people with my advanced DVD copy of the Friday the 13th remake. There’s a certain sense of pride that comes along with receiving a screener, not just because it’s free but also because you’re getting it before other people, and there’s absolutely nothing wrong with embracing that pride.

In the years since 2009 I’ve become more and more involved in the horror community, writing for several websites and becoming somewhat of a self-appointed ambassador for the genre. You can often find me on Twitter encouraging people to support horror movies and keep the genre alive and kicking, and I’m a HUGE proponent of horror fans paying to consume the art they enjoy.

When I received that copy of Friday the 13th in the mail, a proverbial fire was lit in my belly, and I would spend hours shooting off e-mails to distribution companies and requesting copies of their latest releases. I wanted to see it all, I wanted to pay nothing, and most importantly, I wanted to be able to review new movies as soon as they were released.

And sure, I also wanted to take pictures and impress my friends.

But somewhere along the way I lost interest in the screener game. Though my methods proved to be hugely successful, and though I would often teach them to others, I all but stopped requesting review copies a couple years ago, and haven’t sent out one of those e-mails in quite some time. I initially wasn’t even sure why I stopped, but it has recently become crystal clear to me.

It all comes back to supporting the horror genre, and getting a thrill out of doing so. And though I would certainly never equate screeners to illegal downloads, there’s something about asking for free horror movies that goes against my core principle of supporting horror cinema. The two, at least in my mind, simply do not go hand-in-hand, and I can no longer justify getting all the latest horror movies… for free.

This is a controversial stance, I’m aware, and my fear in expressing this viewpoint is that many will misunderstand what I’m saying. For the record, there is nothing wrong with asking for free movies, if you intend on reviewing them and spreading the word, as it’s not like you have to con distributors into sending them out. Oftentimes, they’re more than happy to, and that’s their choice rather than yours.

And believe me, I completely understand why distributors do in fact set aside a certain number of discs for these purposes. The idea being that if I positively review a movie that a company sends to me, for example, YOU in turn may take my advice and BUY that movie. And that’s all good and well, as that’s the way this whole thing works. Always has been and probably always will be.

But if you have to buy the movie, shouldn’t I have to buy the movie as well? If guys like me, who love horror movies so much that we spend a good portion of our time writing about them, aren’t spending the money to buy new releases, then who the hell is? And is it really the smartest thing to send so many free copies to the people whose dollars you rely on in order to stay in business and continue putting out movies?

That last question is one I posed earlier today to indie filmmaker Rob Dimension, the director of short horror films like No Clowning Around, Baggage, and most recently, Rabbit Hole. Some would argue that indie filmmakers simply need to send out free copies in order to get the almighty “exposure,” and I was curious to hear what a working filmmaker had to say about that particular topic of discussion.

“I have sent out plenty of physical copies and streaming links of my films. Less than half of those who promised reviews actually wrote them,” Dimension told me, highlighting another big issue with screeners. “I have also uploaded my films online and just plain given them away, all with the hopes of establishing some worth and proving myself in the genre I love.”

“The times have changed and giving away your work has unfortunately become the norm,” he continued. “As a result it’s very tough to create value in your art. Filmmaking is an incredibly saturated field, especially when it comes to the horror genre. New films are released all the time and we all want to be noticed.”

“I slight no one for accepting free movies,” Dimension was quick to make clear. “All I hope is that more horror fans give independent filmmakers a chance, support us, and allow us to put value to our art.”

It is precisely for the reasons laid out by Dimension that I now get much more of a thrill out of renting/buying movies than I do out of receiving them for free. I realize it may seem ridiculous that I’m publicly telling distributors to NOT send me free movies, but the genre and the filmmakers that play around in it need my money to continue what they’re doing, and I’m more than happy to give it to them.

Are screeners hurting the industry the way that piracy is? I’d hardly be able to justify answering anything but a resounding ‘no’ to that question. And again I’d like to stress that I am in no way criticizing those who feel differently about this topic than I do. More than anything, ‘rants’ like this one exist only to inspire discussion, and this is merely intended to be food for thought.

So feel free to spit it right out.