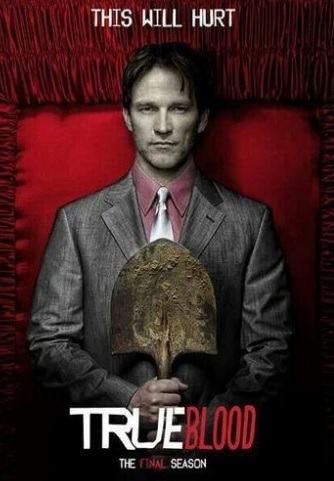 Is Sam going to leave Bon Temps? What was Tara trying to tell Lettie Mae and Lafayette, in their V-induced hallucination? Why is Violet targeting Adilyn and Wade? And is anything ever going to actually happen?!

These are some of the questions we were left pondering after Episode 6 of True Blood’s final season, and last night those answers were once again pushed off for another week.

Episode 7, titled ‘May Be the Last Time’ was the latest in an all-too-long string of time-killing Season 7 episodes, as we inch ever so slowly toward the series finale.

Despite the yawns it seemed happy to induce, the episode wasn’t totally lacking in the entertainment department, with the return of Hoyt being the highlight for me. A few episodes back, Hoyt’s mother was killed and Jason was forced to call his former best friend, teasing a full-on return that came to fruition last night.

Since being glamoured by Jessica a while back, Hoyt has absolutely no recollection of Jason, a fact that never ceases to break the man-whore’s heart into a million little pieces. Hoyt returned to town with his sexy girlfriend and Jason couldn’t keep his eyes off of her, mirroring the very same issue that forever drove a wedge between the two.

Jason was forced to comfort Hoyt when he identified his mom’s body, lying and telling him that Maxine was not a part of the lynch mob that she most definitely was. While the two were hugging, Hoyt’s girlfriend came up from behind and sandwiched-hugged Jason in-between them, an on-the-nose depiction of Jason’s penchant for destroying relationships.

How funny would it be if Jason ends up banging her? Needs. To. Happen.

Past character returns were very much the name of the game in ‘May Be the Last Time,’ which also saw the return of that weird midget doctor lady and Sookie’s fairy grandfather Niall (Rutger Hauer!). After the former failed to help a quickly-dying Bill out in any way, Sookie desperately placed a fairy call to Niall, who materialized in her kitchen, ate some spaghetti and essentially told her that both her and Bill are shit out of luck.

While it was great to see Niall back, if only because Rutger Hauer is totally awesome, he really didn’t serve much purpose in the episode, and it was quite clear that the writers are just trying to jam as many familiar faces from the past as possible into this final season. Nothing wrong with that, I suppose, but surely they could’ve come up with a better use for Hauer’s character than they did.

That said, seeing Rutger Hauer dematerialize into a puff of smoke is always amusing, so there’s at least that.

Resigning to her fate, and the fate of her former lover, Sookie promised Bill that she’ll stick with him until the end, which led to yet another return; the return of their sex life. At the end of the episode, Sookie and Bill swapped infected spit and jumped each other’s bones, making sweet love for the first time in a long time. Ah ha. So that’s where they got the episode’s title from.

Flashbacks to Bill’s past throughout the episode have me feeling that a baby is on the way, though I’m pretty sure vampires don’t have baby-making sperm… do they? Perhaps the eggs of a fairy are so magically fertile that they don’t even need healthy sperm in order to do whatever eggs do when sperm comes into contact with them – I never paid much attention in health class – so I suppose anything is possible.

Then again, it’s also highly possible that there’s really no good reason why we keep being shown these pointless Bill flashbacks, as again I must point out that the writers don’t seem to really know what to do this season. Flashbacks kill time, and delay the very few things they’ve got to show and/or tell us, so that’s probably why we keep getting them.

In Eric and Pam world, the two – along with the Yakuza – finally tracked down the whereabouts of ‘Noomi,’ but not before Eric made the ‘holy shit, I need to kill someone right now’ decision to turn Sarah’s sister into a puddle of gore. Katsumo revealed that he plans on using Sarah’s antidote-ridden blood to create a cure-all beverage called New Blood, giving Eric a hefty percentage of the company’s profits. Oh great. A spin-off series.

Toward the end of the episode the gang tracked Noomi down at the old Light of Day compound, where she was having all sorts of ‘Ghosts of Lovers Past’ hallucinations. Jason, Steve Newlin, that headless yogi dude and even Truman Burrell popped up to tell Noomi she was about to die, and I can only assume we’ll be seeing that oh-so-satisfying death scene next week.

Then again, we’ll probably have to wait until the series finale, which will likely be the only episode of the season where shit actually happens. Sigh.

In an awkward-yet-adorable scene that surely reminded all viewers of their ‘first time,’ the two young lovers ultimately decided to put aside the toys and just do normal young lover things, their romantic night ending with Violet storming into the room and showing her true colors. Jessica, lying in bed with a dying Bill, was startled from her sleep by the feeling that Adilyn was in trouble, setting up a near-future catfight confrontation between Jessica and Violet.

Sam was once again totally wasted last night, popping up for a very brief scene at Bellefleur’s, where Arlene asked him the same ‘stay or go’ question his fiancée did last week. Speaking of Arlene, she’s been having increasingly vivid sex dreams about that vampire dude Keith, who eventually arrived in the flesh to dance with her. Well, he totally wanted to fuck, but Arlene is Hep-V positive, so the two instead decided to forgo the in-out.

Did we know she had the virus or was that new information? I’m honestly not even sure anymore. There’s so much going on in this show, and yet so little, at the very same time. As ironic as spoons when you need a knife, if you think about it.

Finally, we saw a brief two-second flash of Lafayette and Lettie Mae digging up the yard of Tara’s childhood home, which almost felt more insulting to Lafayette than not including him in the episode at all. I was very interested in his relationship with James and now it seems he’s just become a pawn in Lettie Mae’s insanity, which is a damn shame. Yet another example of the writers creating way too many characters and just not knowing what to do with them all, which is an issue that’s always plagued the show.

Yawn. I keep waiting for this final season to kick into high gear and start being entertaining, but it’s quickly becoming clear that such a hope is merely a pipe dream. I’m not saying we need nonstop action but good god, we’re now seven episodes into a 10 episode season and nothing much has really happened yet.

Worse yet, the show has taken a boring turn when it by all means should’ve taken an exciting one, as there’s never been a better time than the final season for True Blood to be balls-to-the-wall entertaining. Can’t help but feel that maybe a movie would’ve been the better way to tell this season’s stories and wrap up the show, because there just doesn’t seem to be enough material there to even cover 10 episodes.

Am I the only one who hasn’t yet given up on this show? Maybe it’s time I get my head examined.