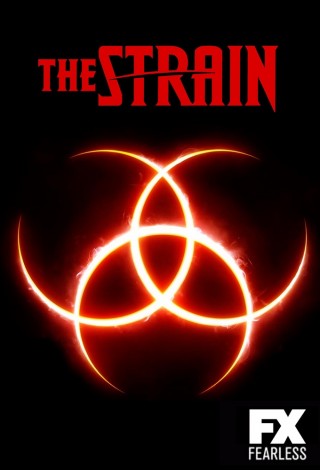 If there’s one thing I’ve been looking forward to from The Strain, it’s Abraham Setrakian’s transformation from badass old dude to badass old dude who kills vampires, which was has been all but promised in the past couple episodes.

Last night, it happened. Oh boy, did it happen.

After being confined to one tiny scene throughout the majority of the show’s fourth episode, which premiered last night on FX, Setrakian popped up at the very end and beheaded a little vampire girl and her vampire father – saving Eph and Nora from a fate worse than death.

It was an awesome ending to an all-around entertaining episode, and the promise of what’s to come has me – for the first time – very much looking forward to next Sunday night’s episode.

But I’m getting ahead of myself here. So let’s backtrack a bit.

Episode 4, titled ‘It’s Not For Everyone,’ kicked off in equally awesome fashion, with the autopsy of Captain Redfern, whose head Eph bashed in at the end of Episode 3. Taking off his clothes and cutting him open, Eph, Nora and Jim discovered that Redfern’s man bits were gone and his organs dried up and dead, with a whole new circulatory system forming inside his body.

As Jim so eloquently pointed out, the autopsy was pretty damn disgusting, and it was also quite an impressive display of practical effects. At one point, Eph pulled Redfern’s giant snake-like vampire tongue out of his mouth hole, which was just the sort of ooey, gooey moment that I’m personally looking for from the show. Gotta love it.

After the autopsy was completed, Jim confessed to Eph and Nora that he was the one who let the mysterious box through the quarantine area, hoping that they’d understand why he did it – as we learned last week, he desperately needs money to pay for his wife’s cancer bills. Unfortunately for Jim, both Eph and Nora weren’t quite so understanding, with Eph punching Jim out and Nora essentially doing much the same thing, in a much less physical way.

Not sure if this means that Sean Astin is off the show or if he’ll either redeem himself or become even further involved with Eichorst and his dirty deeds, though I suppose only time will tell.

Speaking of Eichorst, he and Eldritch Palmer hired a sexy hacker to essentially shut down social media and all of the internet, so that nobody will know what the hell is going on once shit really starts to go down. Later on, Palmer’s liver gave out and he collapsed to the floor, with Eichorst nowhere in sight. As we learned in previous episodes, Palmer is counting on Eichorst and The Master to help him get well, and they had better hurry the hell up, or he’s not going to be around much longer.

Elsewhere, Gus and a friend carried out a plan to steal an expensive car and make some fast cash off of it, but not before Gus gave Setrakian back the clock that his brother stole from him. Though the latter scene at least tied into the events of the show, the car theft and every other scene Gus was in felt like they belonged in a totally different show, and it’s hard to tell what role Gus even plays in the grand scheme of things.

In case you had forgotten – and I wouldn’t blame you if you did – Gus was the dude who transported The Master’s coffin into the city, though everything he’s done since then has had little to do with the show’s central storyline. Would’ve much preferred to see some of last night’s screen time devoted to Vasiliy Fet, who oddly enough was totally left out of the episode.

Also absent from the episode were rockstar-turned-eunuch Gabriel Bolivar and that lawyer lady who survived the ill-fated flight and hasn’t really been heard from since, as it was fellow survivor Ansel Barbour who was made the center of attention. After brutally murdering the family dog, the quickly-turning-into-a-vampire Ansel locked himself in his own shed, urgently instructing his wife to run far, far away.

Ansel’s loyal wife, upon learning that her husband had a craving for blood, literally fed a nosy neighbor to him, tossing him into the shed and slamming the door shut behind him. I love that idea of a wife sticking by her love, even though he’s become a monster, which is very reminiscent of Hellraiser. I hope the Barbour family’s storyline becomes one that’s explored throughout the season, as it showcases a totally different side of the infection than I expected to see on the show.

Of course, as previously mentioned, the highlight of the episode was Setrakian’s dual beheading of two of the many infected hosts on his ‘kill list,’ an act that proved polarizing for the show’s Mulder and Scully; Eph is totally on board with the killing spree, while Nora has – for now – opted out.

The awesome end-cap to the episode set up a landscape for the show’s future that seems primed and ready to depict Setrakian and Eph hunting down all the names on the list, which should be a blast to watch. It seems we’re finally getting to ‘the good stuff,’ so to speak, and I couldn’t be happier about that.

The title of The Strain’s fourth episode pretty much says it all; this show is not for everyone. It’s indeed a polarizing little monster, and though it’s far from the best example of horror on TV we’ve seen in recent years, it’s nevertheless an entertaining slice of Sunday night mayhem that’s become a welcome addition to my weekly viewing schedule.

Not for everyone. But definitely for me. How about you?