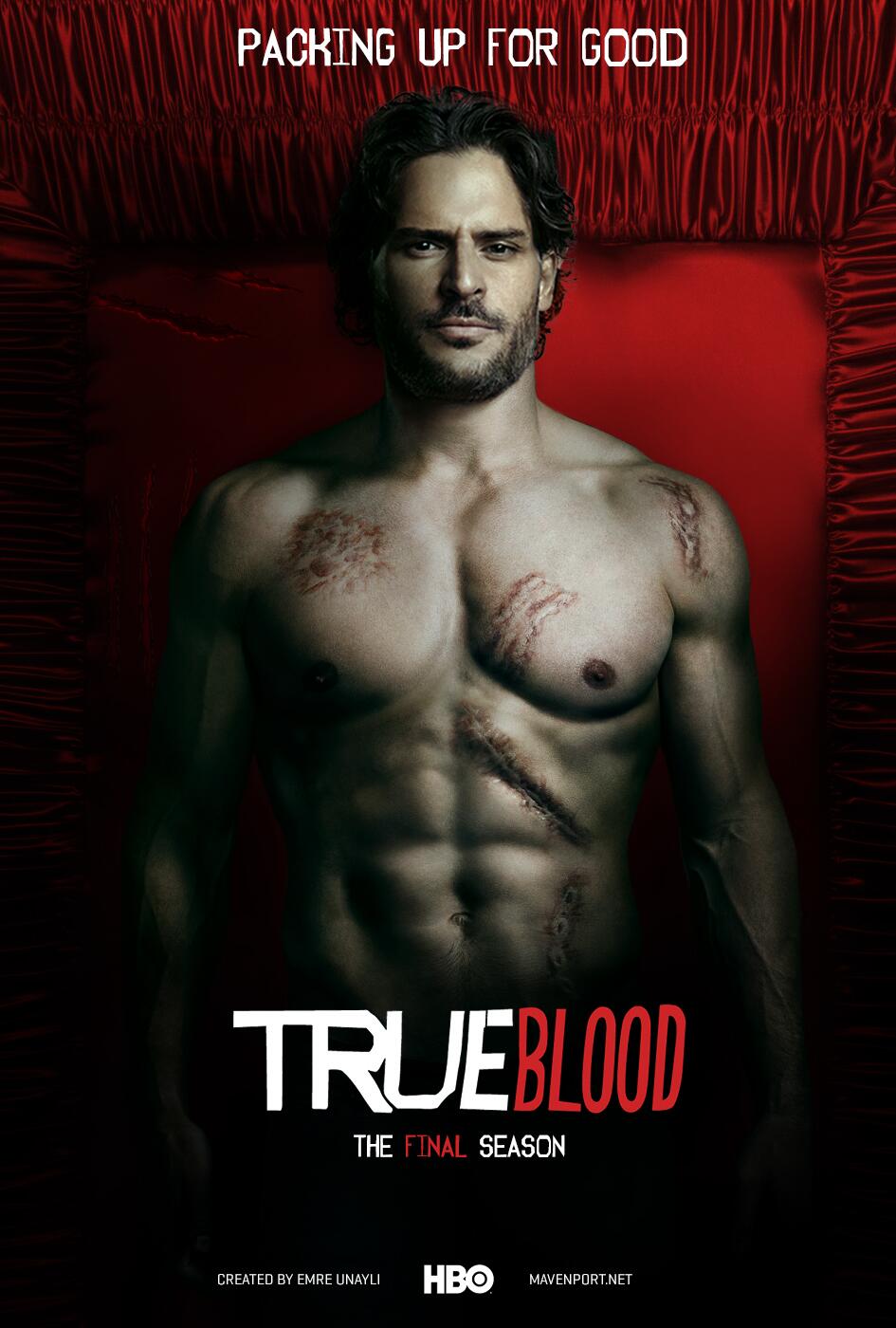 True Blood‘s seventh season premiere kinda bored me, which was surprising considering I expected the show to bust out all the stops right out of the gate – this being the final season, and all.

Unfortunately, there wasn’t much of a momentum pick-up on this past Sunday night’s episode, which I didn’t get the chance to check out until last night.

Belated as it might be, here’s my weekly True Blood recap, with various thoughts and musings peppered in for good measure.

The episode kicked off in most unexpected fashion, with a fantasy dream sequence that surely put a smile on the faces of everyone who has just been dying to see Eric and Jason get it on. In an uncomfortably extended scene of love-making, the two made out and rubbed up on each other, with the scene serving as both female fan service and a way to give Eric some much-anticipated Season 7 screen-time.

(Are women into that sort of thing, or are same-sex encounters purely a male fantasy?)

Outside of the awkward dream world, Jason, Sookie, Alcide and Andy took a road trip to the town of St. Elise, the hometown of that dead girl whose body Sookie found last week. This sequence was the best thing about the entire episode, as it essentially felt like the characters walked right onto the set of The Walking Dead – a wasteland of boarded up windows and strange quotes written on walls, St. Elise was recently besieged by the H-Vamps, who left no human survivors.

In the dead girl’s house, Sookie found her diary, which revealed that the girl’s life wasn’t all that different from her own. Just like Sookie, the girl met a handsome vampire at a bar and had her life turned upside down in the wake of the chance meeting. The diary provided for a nice little Bill/Sookie flashback scene, while also serving the dual purpose of making Sookie realize she’s probably supposed to be with Bill and making us realize that Bon Temps is about to become St. Elise, if the characters don’t do something real quick.

I think it’s pretty obvious at this point that Sookie and Bill are going to end up together by the end of the season, thereby bringing the whole show full circle. Toward the end of the episode, Sookie snuck off to meet up with Bill while Alcide was washing the stank off his hang low, asking him if he can still sense her fear. Presumably, Sookie is about to do some crazy ass shit, and she wants to make sure she’s still got Bill on her side.

I know the Sookie/Bill relationship isn’t exactly the most popular one on the show, but I can’t deny that I’ll probably have a smile on my face when they finally get back together. Sookie just never felt right with anyone else, and I’m anticipating that the reunion will make for a nice little finale moment. I’m a romantic, what can I say?

Meanwhile, in the basement of Fangtasia, Arlene, Holly and a few other expendable characters are still chained up and fending for their lives, with a gaggle of hungry H-Vamps roaming around upstairs. Determined to escape, Arlene makes the realization that one of the H-Vamps is the former teacher of her children, and after some fairly humorous dialogue is exchanged, teacher vamp decides to set the two free – only problem is, she melts into a pool of vampire pudding, right as the shackles are about to be undone.

One of the big problems I’ve got with this season so far is that the H-Vamps just aren’t all that interesting/scary as the season’s lead villains, which is a bummer because I actually kinda like the idea of rogue, pissed off vamps posing the biggest threat to our beloved characters. They just don’t quite feel aggressive enough, and too much time has already been spent on developing their humanity. If the idea is that the virus turns Twilight vampires into Stake Land vampires, then why the hell is the teacher so compassionate toward Arlene and Holly?

Maybe it’s just me, but the scenes in St. Elise really left me wishing that the H-Vamps were more zombie-like, and I personally wouldn’t mind it if the writers took a few more pages from Walking Dead‘s playbook. If these H-Vamps are savage monsters, then make them savage monsters – because at the moment, they don’t feel all that different from the show’s uninfected vampires.

The other threat this season seems to be the Bon Temps townspeople – the ones we don’t know too well – who were rallied together this week by the guy who’s butt-hurt about Sam being mayor. After convincing them that Sam doesn’t have their best interests in mind, as well as telling them that he’s a shape-shifter, a mob was formed out of the small town’s residents, who decided to take matters into their own hands and arm themselves with police-issue weapons.

Upon discovering that Andy’s daughter Adilyn is not human, thanks to a burst of fairy light she unleashed upon a female police officer, the mob kidnapped her, leaving Andy to once again feel like the worst piece of shit father in the world. At the time, Jessica was unable to save Adilyn because the sun was still out, but she vowed to Andy that she will make things right, once night falls.

Good god, poor Andy. If there’s any character on the show who I want to see provided with a happy ending, it’s probably him. He damn sure deserves it.

In the season’s most uninteresting of the 76 subplots, we learned that Tara’s alcoholic mother Lettie Mae has become addicted to vampire blood – but of course she has! – drawn to the way it makes her feel like Tara is still with her. The possibly dead Tara popped up for a brief V-induced hallucination scene, standing up on a cross and speaking in a language I was sure as shit never taught in high school.

In the episode’s surprising finale, Pam finally located Eric in France, where upon we saw that he’s got some gnarly looking black veins on his chest. Of course, the implication is that Eric has been infected with Hepatitis V, and will presumably die before the end credits roll on the series finale. Unless a cure is discovered, of course. Could go either way, as I wouldn’t be at all surprised to see several major characters fall by season’s end.

Much like the season premiere, I found Episode 2 to be fairly boring and uninteresting, and I’m still waiting for things to kick into high gear and for the season to start feeling like the action-packed swan song I was fully expecting the entire thing to be. One of the traps the show always tends to fall into is focusing on far too many characters and one too many side plots, and this issue feels more damaging than ever, now that we’re balls deep in the final season.

With only 10 episodes in Season 7, the bulk of that time and energy should be spent on the characters we truly care about, and this season already feels a bit too crowded with unfamiliar faces. Now’s the time to tie-up storylines and just let us have fun hanging out with the characters we love one last time – in other words, more stuff like Jason’s ‘pizza forensics’ scene – rather than bringing new ones into the fold.

My joke has always been that True Blood is the Twitter of TV shows – 140 characters at a time – and that’s a persistent issue that threatens to derail the entire final season, if not properly dealt with and curbed. For now, my fingers are still crossed, and I have faith in the fact that the writers have still got a whole lot of awesomeness up their sleeves.