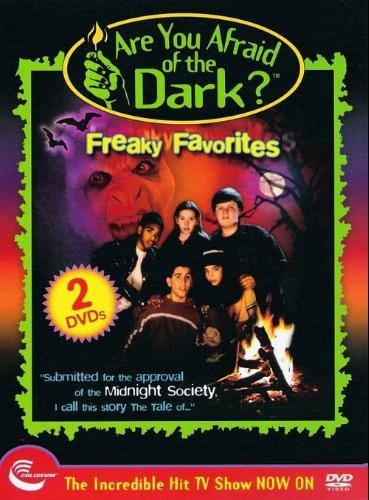 To surprisingly little fanfare, Season 1 of Nickelodeon’s Canadian TV series Are You Afraid of the Dark? was quietly released onto DVD here in the states last Tuesday, as part of Amazon’s manufacture-on-demand service. The collection was followed up this week by the complete second season, presumably with the others to follow in the coming weeks.

What makes the releases so exciting is that this is the first time complete seasons of the show have EVER been officially put onto DVD in the United States, which has made the series one of the most anticipated home video releases here in the horror community for quite some time.

Airing from 1990 through 1996, followed by a brief revival from 1999 to 2000, Are You Afraid of the Dark? was an anthology TV series that ranked right alongside Tales from the Crypt and Goosebumps as one of my favorite childhood pleasures. Each 30-minute episode featured a family-friendly tale of horror told around a campfire by a group of young friends who called themselves ‘The Midnight Society,’ the show essentially serving as The Twilight Zone for budding horror fans.

It’s been many years since I’ve seen an episode of Are You Afraid of the Dark?, and my appetite for revisiting the series was most definitely whet by the release news. Though I placed an order for both Season 1 and Season 2, it’s going to be about a week before they arrive on my doorstep, and since I don’t want to wait, I decided today to crack into the Freaky Favorites DVD collection I picked up a few years back.

The two-disc affair contains six episodes from the sixth season of the show, which originally aired in 1999 – well past the point where I was watching, as a kid. In fact, I think it’s safe to say that I had never before today seen a single episode from either of the two revival seasons, and I honestly don’t have any valid excuse for never cracking into this set. One of those things I’ve been meaning to do for years, but just never got around to.

Let’s finally make that right and take a closer look at Disc 1 of the Freaky Favorites collection, shall we?!

The first story on the disc submitted for the approval of The (New) Midnight Society is ‘The Tale of the Forever Game,’ which was the first episode of the series in nearly three years. The premiere of the first of two revival seasons, the tale is introduced by Tucker from the original Midnight Society, to a new group of friends (including Elisha Cuthbert!), and centers on a creepy forest, which traps a dickhead teenager, his sister and a friend.

When the douchey teenager gets sucked into a creepy tree, he meets an equally creepy boy who introduces him to the titular ‘Forever Game.’ Essentially, it’s a board game that has direct consequences on the outside world; when the game piece lands on the section of the board with lightning bolts on it, for example, a storm breaks out in the forest where the player’s sister and friend still reside.

Eventually, the game board summons a werewolf-like monster that uses its sharp claws like throwing stars, which pursues the young kids. As if that wasn’t bad enough, the teenager learns that if he loses the board game he’ll have to spend the rest of his life inside of the tree, never to see the outside world again. Now that’s what I call high stakes!

‘The Tale of the Forever Game’ almost feels like a live-action adaptation of an Are You Afraid of the Dark? board game, and it’s interesting to note that Nickelodeon almost did turn the episode into a real game. It’s just the sort of corny fun that surely must’ve made many happy about the return of the show back when it originally aired in 1999, the episode capped off by Tucker’s smile-inducing proclamation that the Midnight Society is back.

Next up is ‘The Tale of the Zombie Dice,’ the premise of which isn’t all that different from ‘The Forever Game.’ Primarily set in an arcade, the episode is about a game with deadly consequences, which the owner pressures a young risk-taker to play. If he wins the game of ‘zombie dice,’ the kid gets free reign of the arcade for one year. If he loses, the owner takes his thumb print, which is a whole lot worse than it sounds.

As we find out when the kid loses, the arcade owner has a machine in his basement – manned by a brutish homeless dude – that turns young boys into tiny pets, which he sells to high-paying buyers. Once a thumb print touches the surface of the machine, kids are sucked into it and their tiny selves are housed inside of a cage underneath, where they’ll soon be sold off to the highest bidder.

Enter the human hamster’s wimpy friend (This is the End star Jay Baruchel), who’s tasked with playing the same game, to save his pint-sized buddy.

With a fun setting, a delightfully sinister villain (played by Edward Yankie) and a premise that’s a wee bit creepier than the usual Are You Afraid of the Dark? fare, ‘The Tale of the Zombie Dice’ is hands down my favorite episode on the disc, which has enough going on in it that it easily could’ve been expanded into an oddball feature film. I guess we’ll never know what those wealthy folks do with their human pets!

And finally we have ‘The Tale of Jake the Snake,’ which unfortunately has nothing to do with former wrestler Jake ‘The Snake’ Roberts. The fact that Are You Afraid of the Dark? was a Canadian production is quite evident in this hockey-themed episode, centering on a young player named Wiley who’s not quite good enough to make the team. That is, until a mysterious shadowy figure introduces him to a magic stick, which changes both his ability and his life.

Though at first a nasty rash is the only price Wiley has to pay for his new-found talent, he soon gets snake-like urges to eat mice, his skin starts shedding and he begins turning into a human-snake hybrid – the original owner of the magical hockey stick was nicknamed ‘The Snake,’ you see, and Wiley has unknowingly inherited his slithering curse.

With a human snake, a human turning into a snake, a rubber snake and a dated 90s CG snake, ‘The Tale of Jake the Snake’ most definitely lives up to its name, essentially playing out like a kid-friendly version of a Syfy original picture. Like Syfy’s best movies, the episode is incredibly corny, quite bad and yet hard not to love!

Head over to the AreYouReallyAfraid? YouTube channel to watch more full episodes, and stay tuned for my thoughts on Disc Two of the Freaky Favorites set, right here on Halloween Love!