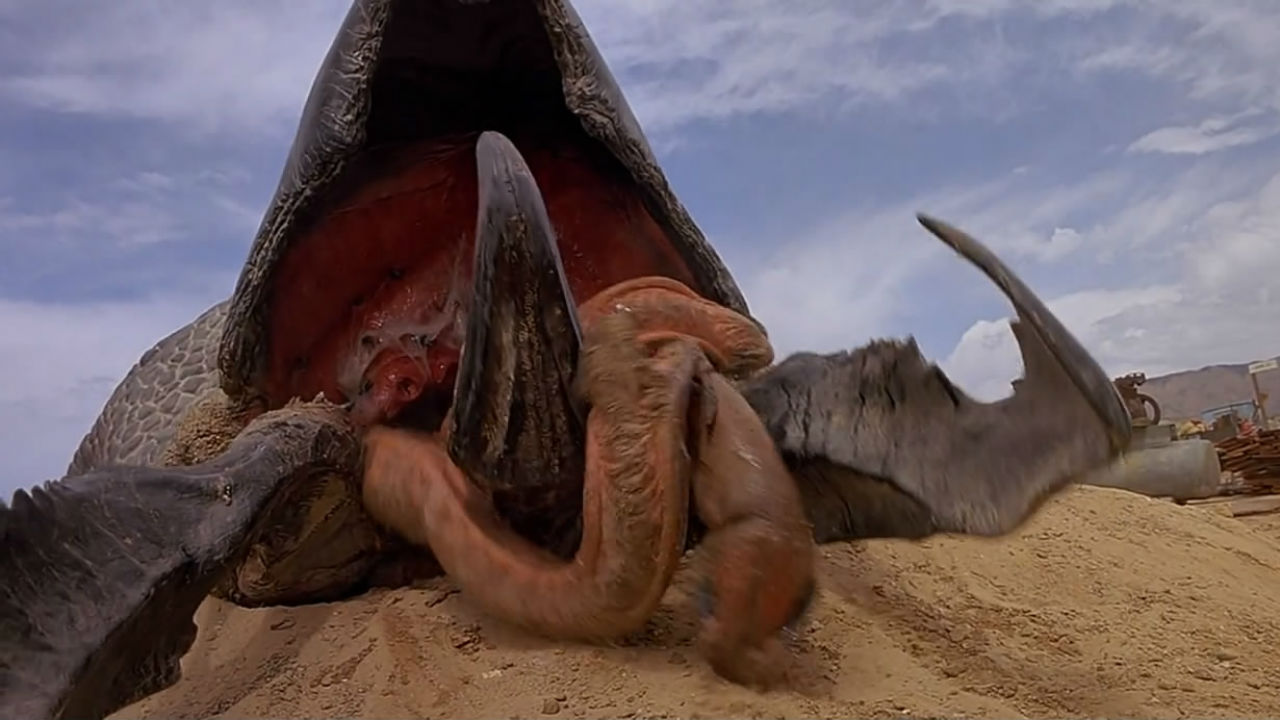 Released on home video this week, Tremors 5: Bloodlines is the first installment in the monster movie franchise in eleven years, coming in the wake of sequels that went straight-to-video in 1996 (Tremors 2: Aftershocks) and 2001 (Tremors 3: Back to Perfection), as well as a DTV prequel in 2004 (Tremors 4: The Legend Begins). And then there was Tremors: The Series, which premiered on Syfy in March of 2003.

Produced at the same time as Tremors 4, the spinoff Tremors television series picked up after the events of the franchise’s third installment, set in Perfection Valley and starring Michael Gross as Graboid-slayer Burt Gummer. Thirteen episodes aired as part of the first and only season of the failed series, which was quite a disaster – the episodes aired out of order, forcing many viewers to throw in the towel.

So yes, there was indeed a Tremors TV series, no matter how short-lived it ended up being. But a far different show was almost spun off from the creature feature film franchise, nearly a full decade prior.

Long before Syfy came knocking, franchise co-writers/directors S.S. Wilson and Brent Maddock developed a pitch for a series called Tremors: Lost Monsters, which was to reunite heroic duo Earl Bassett and Valentine McKee – played by Fred Ward and Kevin Bacon in the 1990 film. They began drawing up plans for the series as early as 1995, during pre-production on exceptional sequel Tremors 2: Aftershocks.

The basic premise, as found on the website for Wilson and Maddock’s production company Stampede Entertainment, was that Earl and Val would become world famous after their success in killing off the Graboids, sought out by readers of tabloid newspapers and believers in the paranormal to hunt down and lay waste to other mythical monsters. Burt Gummer was also set to join them in their adventures.

Though the project never got off the ground, Wilson and Maddock drew up various pieces of concept art for the different monsters that would appear in it, which thankfully have been preserved here on the world wide web – and which we’ve included down below. Seven monsters in total were drawn up by the team, and the aforementioned Stampede Entertainment website even includes plot details for the episodes.

In one episode, for example, the monster hunters head off to an abandoned country house that is apparently haunted by ghosts – which they refuse to acknowledge the existence of – and they eventually discover that it’s actually Bigfoot disguising himself under a white sheet. In other episodes they were to battle a vampire in the mountains, a tree-dwelling octopus, a flying creature, and even alien robots.

Check out all the concept art, along with episode details. 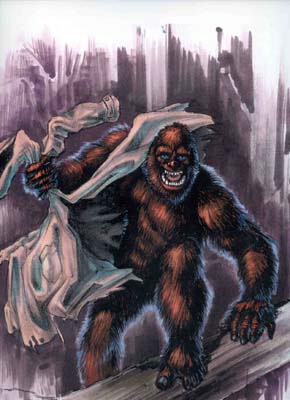 “A beautiful woman begs the guys to help her de-ghost an abandoned country house she wants to buy and renovate. They can’t turn down a pretty face and off they go. But what they uncover is that the “ghost” is actually a very intelligent Bigfoot. He puts on a sheet and pretends to be a ghost because he’s found it keeps people away. If he shows himself for what he really is, people want to catch him.” 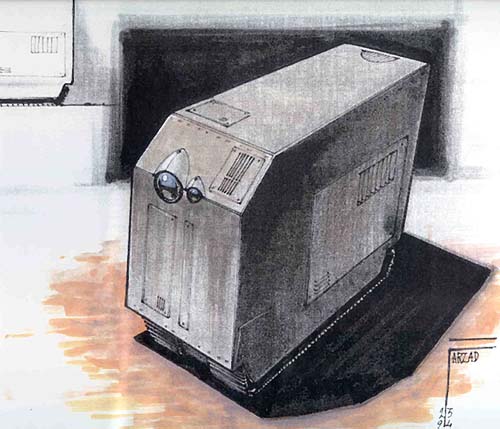 “Perfection is invaded by robots that tear the place apart and begin building some sort of road. Assuming “No way these boys are local,” Val and Earl launch an attack against what they think are alien probes – and inadvertently destroy the U.S. Military’s latest hi-tech weapon. Turns out the robots, designed to build airfields in hostile territory, were being tested in Area 51, but wandered off the test site.” 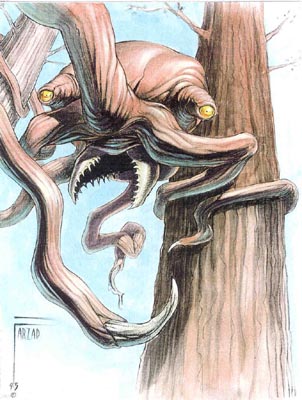 THE THING IN THE TREES

“People are mysteriously disappearing into thin air out in the woods. Their tracks just stop, with no sign of a struggle. Val and Earl eventually discover an arboreal octopus, lurking above to prey on the unsuspecting.” 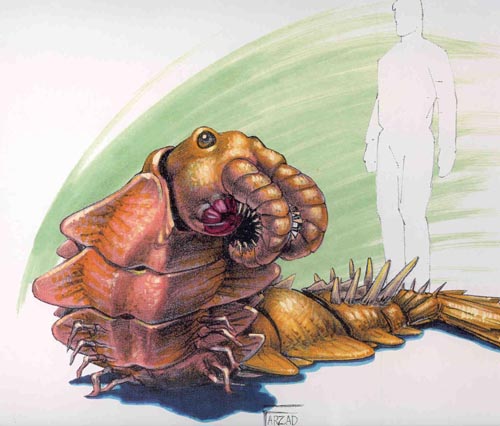 “This drawing is based on an actual prehistoric shrimp-like thing. It was quite large and pretty fearsome looking. Val and Earl are called to battle it when it suddenly begins attacking boaters in a recently flooded dry-lake bed. We were borrowing on the desert brine shrimp, which lay dormant for years until brought to “life” by the infrequent rain. This idea was made into an episode of Tremors: The Series.” 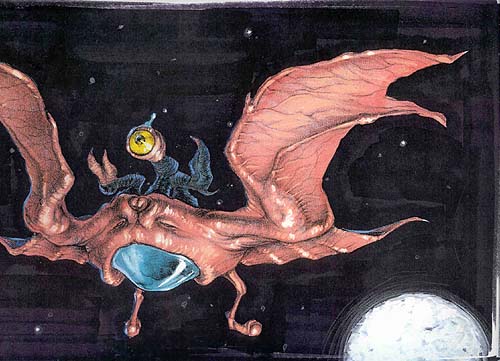 “A creature swoops down on sheep and people. Val and Earl first try to trap it by dressing as sheep. Burt tries to bring it down with a homemade heat-seeking rocket. The solution turns out to be – sky fishing! They “troll” the skies from their pick-up, flying lamb-chop bait from an oversized kite. When the creature is hooked, Earl, strapped into a dentist chair in the pick-ups bed, reels it in on deep sea fishing gear.” 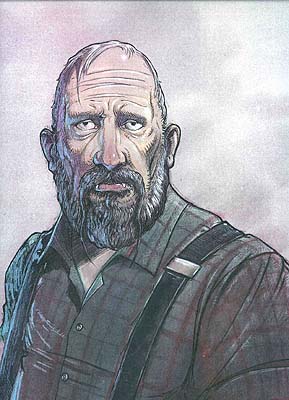 VAL AND EARL MEET THE VAMPIRE

“On a fishing trip with Burt, our brave boys encounter a reclusive character who turns out to have some nasty nighttime habits. Naturally, ours was not a typical vampire, but the Tremors version – an easy-going mountain man. Val and Earl have to stop making fun of the extra gear Burt has brought. It takes everything he’s got to send the vampire back to the dead.” 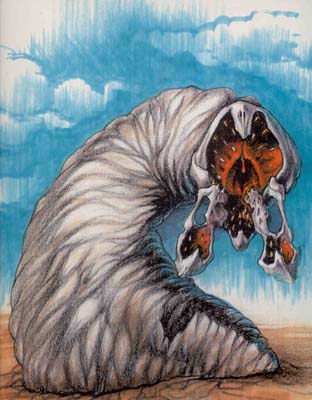 “This drawing is based on the original Graboid drawing from Amalgamated Dynamics. The idea was, Val and Earl discover there is one surviving Graboid. A unique albino creature, the worm was to appear off and on throughout the series, tormenting the guys – who are never quite able to catch it. Eventually they develop a respect for the beast. The great white worm was introduced in Tremors 3: Back To Perfection.”

As noted in new book The Unofficial Guide to Tremors – a must-own for fans of the franchise – it was very likely that Fred Ward and Kevin Bacon wouldn’t have reprised their roles for the series, with new actors presumably being brought in to replace them as Earl and Val. As for Michael Gross, who appeared in all the movies and every episode of the 2003 TV series, there’s a good chance he would’ve played Gummer.

It’s interesting to note that yet another Tremors series was at one point planned, titled Burt’s Basement and centered entirely on Burt Gummer. This was recently mentioned by Michael Gross during an interview with iHorror, wherein the actor revealed that he talked himself out of signing on – spelling the end of that idea.

With horror TV as hot as it is right now, could the Tremors franchise someday get another crack at small screen success? I suppose that all depends on how well Tremors 5 does on home video. So be sure to support it!