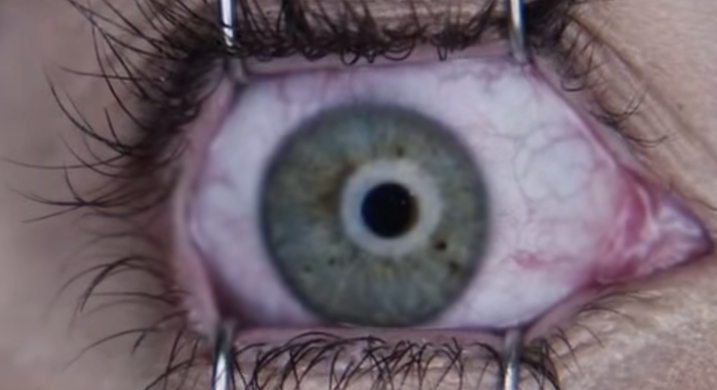 It’s time for another phobia and the movie moments that could cause suffers to turn away and squirm in terror!

We started last week with Coulrophobia (Fear of clowns), and today is the turn of Ommetaphobia … here is a little online info that explains more:

Ommetaphobia is also known as Ommatophobia and is the fear of eyes. Ommetaphobia develops when someone has a bad situation or traumatic event occur in their life involving eyes like seeing an eye pop out of the socket, getting hit in the eye, or going blind in an eye. It is considered a social phobia because it involves social situations such as looking into someone’s eyes, touching your eyes or things getting into your eyes.

Unlike those evil, evil clowns I can’t say it’s a phobia / fear that has ever been in my life but I can certainly understand why it happens. Eyes are fragile, delicate, crucial and sensitive. About a year ago my young son accidentally scratched MY eye late at night. It was several hours until I could get treatment and the pain is something I will never forget.

The thought of significant injury or witnessing damage to them is cringe inducing to many and over the years movie makers have taken this unnerving possibility and used it to create some horribly memorable moments … Let’s take a LOOK!

Don (Robert Carlyle), isn’t the bravest dude in the world as we find out at the start of 28 Weeks Later when he abandons his wife and makes a run for it. As it turns out his wife Alice (Catherine McCormack), survives the incident due to the fact she is a ‘carrier’ for the rage virus … it’s in her blood stream but she has no symptoms. When they are reunited Don proves he is stupid as well as a coward by kissing her on the lips and instantly becomes infected.

What follows is a rather uncomfortable scene where the ‘rage’ infected Don beats Alice to death and just to add the icing to the cake he pushes his thumbs into her eyes … All the way!

This is one of those classic horror movie torture scenes where you can’t help but place yourself in the position of the victim and imagine just how horrific it would be to experience what is unfolding.

Very subtle ‘squelching’ noises can be heard as the psychotic Asami (Eihi Shiina), pushes some painfully long needles into the eyes of the seriously unfortunate Shigeharu (Ryo Ishibashi), but the worst part is probably the playful ‘flick’ she gives them when she is finished and happy with her work.

I remember this scene making me uncomfortable in my youth … even though you are fully aware the character is a cyborg it’s still not easy watching the moment Arnie cuts out his damaged eye with a scalpel and drops it into a sink of bloody water. Then he presses a clean, white towel against the freshly made hole, it’s enough to turn your stomach.

When I was a kid there were two scenes toward the end of Total Recall that my friends and I would always fast forward toward and watch over and over with morbid glee. The first was the moment Michael Ironside has his arms ripped off while hanging from the elevator and the second was the scene where we get to witness what happens when Cohaagen (Ronny Cox) takes a walk on Mars without a space suit.

The lack of life sustaining atmosphere instantly starts to boil his blood and then there are the other ‘eye-popping’ side effects.

Fans of the Kill Bill movies had been eagerly anticipating the inevitable fight between the Bride (Uma Thurman) and Elle (Daryl Hannah) from the very start and when the pair finally clashed the first minute or two didn’t disappoint. But just as it seemed the battle was reaching a sword-swinging climax the Bride decides to get creative and in one swift motion she leans forward and plucks out Elle’s one remaining good eye, ending the contest for her now totally blind adversary.

Before you ask … no, I have ZERO idea what’s going on in this short film by Luis Bunuel and Salvador Dali. My girlfriend told me to watch it when she heard about this list and a few seconds in I was met with the sight of a woman calmly allowing someone to pull her eye open and then have it sliced across the middle by a very large razor blade.

Some investigation revealed the close up eye-slicing shot was achieved by using a dead calf and the end result really is impressive considering its age.

The ‘Ludovico technique’ scenes would be difficult enough to watch in a modern film with the knowledge it was all special effects and body doubles! … But this was 1971, and it was a Kubrick movie!

Malcolm McDowell was strapped into a straight jacket and had to endure minute after minute of wearing the eye-clamps and being unable to blink. The eye drops that are administered to him during the scene are coming from a real doctor but despite the precautions McDowell badly scratched his corneas and suffered for his art. Ouch!

One of the best short horror films to have been released in recent years, it tells the story of a movie critic who gives a scathing review and is then kidnapped and tortured by the director of the horror movie he panned.

Part of the torture involves the kidnapper showing the critic just how dangerous a paper clip can be (you’ll understand why when you watch it). He unfolds the paper clip, places it between his teeth, leans forward and proceeds to stab his captive victim in the eye with it … over and over and over again. A very intense scene that got my heart pounding.

Had to be on the list, this is a truly classic example of horror movie, eye trauma!

Paola (Olga Karlatos), goes to take a shower unaware that she has a peeping tom watching her every move. Unfortunately for her the unwelcome visitor turns out to a zombie which smashes its way into the bathroom, grabs her hair and EVER SO SLOWLY pulls her head toward a large wood splinter from the broken door.

You get to see it slide all the way down and for good measure it snaps off while embedded in her face. Oh, and she gets eaten. Bad day.

This is the eye trauma scene from hell that just keeps on giving!

In true Final Destination tradition everything that could go wrong with a visit to an eye surgery clinic DOES go wrong in spectacular ways. First of all we get more eye-clamping fun, this is followed by a malfunctioning laser that starts to slice through the eyeball and eventually poor little Olivia (Jacqueline Macinnes Wood) somehow manages to trip and fall from the second floor window, dying on impact with a car below.

We are left with a final shot of her eye popping out … rolling across the street … and as it gently comes to a stop, a car unceremoniously drives over it. Nice!

Did I miss any of your favourites? Leave a message and let me know …

I’m off to buy some Optrex, my eyes suddenly itch like crazy!!