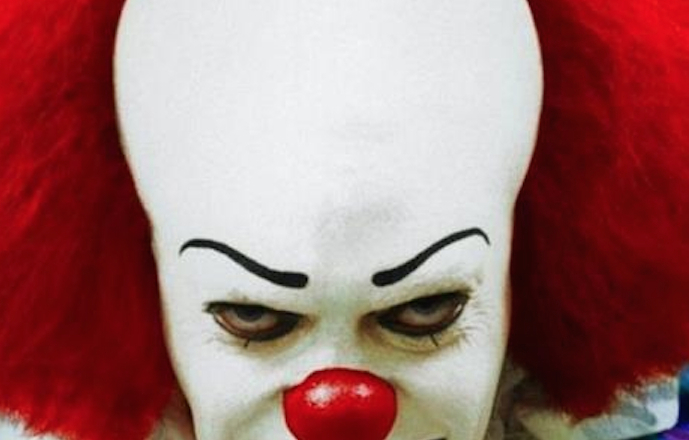 Clowns … They bother me! Today I’m counting down the 10 clowns that have freaked me out the most over the years. Some are typical horror movie creations, others just turned up in regular TV shows and films, but their appearances left a mark on my young mind and shaped an unnerving dislike for them that continues to this day.

A few entries might surprise you and some might be new to you but all of them have one thing in common … At some point in my life they have utterly scared the hell out of me!!

Van De La Plante does some good work under the mask and heavy costume, meaning the end result is a memorable character within a fairly bland horror movie.

The only thing worse than a killer clown? … A zombie clown. Seriously, I’d just nuke this thing from orbit. It’s the only way to be sure.

A scary clown moment from my childhood, meaning the fear it elicits still feels strangely intense and sticks in my mind. You might laugh but honestly, if you haven’t watched this scene from Moonraker or have just forgotten the details then revisit it sometime soon. The way it’s filmed and the sheer size of Richard Kiel combine to create a surprisingly disturbing couple of minutes.

If fears are created when you are young then this played a big part.

Not the greatest horror movie ever made (That’s being kind), but the part in the bedroom where Tabitha (Katheryn Winnick), tries to get to sleep while a life-size clown doll sits in a rocking chair at the end of her bed is brilliantly tense and creepy. Of course, it isn’t a doll at all (obviously) and let’s get real, who the hell would sleep in the same room with something like that anyway?!

I’d beat it, smash it, tear it into little pieces and finally burn it. Then after flushing the ashes down the toilet … I would sleep. 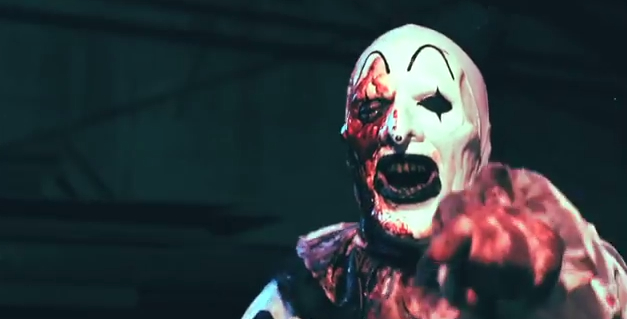 The most recent entry on the list. The movie itself is very low budget and poorly acted but experienced horror lovers will enjoy the gore level and Art the Clown truly is a brutal, terrifying creation.

I thought I had seen everything that was possible when it comes to killer clowns but this guy came along and reintroduced me to a fear that had been forgotten for a year or two.

What is it with Bond movies and clowns? Again this entry is here because it confused and frightened me as a kid and as such will always have a special place within the darkest corners of my mind. It basically planted more clown disliking seeds! This clown isn’t even bad or evil, instead it is the scene as a whole that came across as shocking and creepy.

Octopussy starts in a normal ‘Bond’ way with action and adventure then after the opening credits they cut to Berlin at night, where a clown is being chased through woodland by identical twins who are throwing knifes at him. He is eventually stabbed in the back and falls into a river, emerging a few minutes later on the edge of death. The clown staggers into the grounds of a British embassy and manages to summon enough strength to fall through some glass doors before collapsing dead on the floor … hands covered in blood, balloon still attached to his wrist. 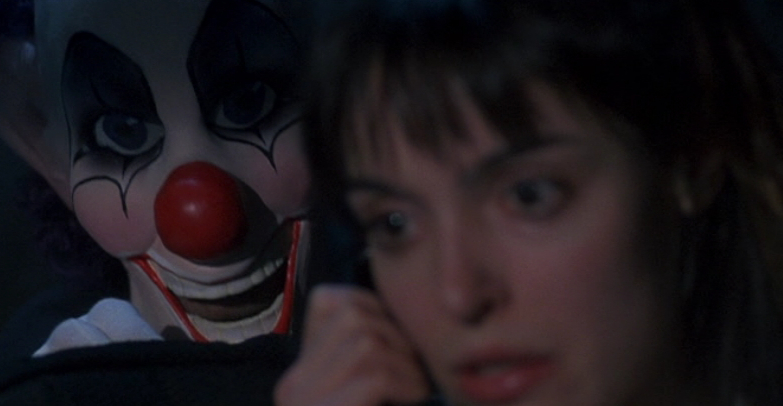 I didn’t properly watch this until many years after it was released, but I vividly remember the trailer for it being included before several movies my Dad rented on VHS back in the day and the quick glimpses of the clown mask wearing killer were enough to give me serious shivers.

You have to wonder though just how practical such a large mask would be if you decided to go on a killing spree? No peripheral vision, sweating like a pig, always bumping into stuff … Jason had the right idea, keep it simple. 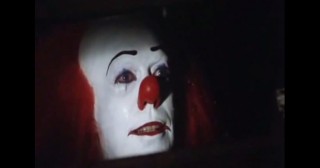 You can’t have a clown list without including the King of scary clowns, Pennywise. It would be like listing the greatest sharks in movie history and not including Jaws. I’ll be honest, with each year that goes by he frightens me a little less but I think that’s simply because of too much exposure, as an image Pennywise seems to be everywhere these days.

What hasn’t diminished over the years and never will is the performance from Tim Curry, who naturally has a powerful, dark voice and creepy face … Add some clown make-up and crazy hair to the mix and what you end up with is a legendary horror character.

If I had to pick one moment where my clown fear was born then it was probably this classic scene from Poltergeist. Looking back I think I was a little too young when I watched the movie for the first time (About 9 or 10 ish’) but it has a strange Spielberg vibe to it and my parents were pretty relaxed about what I could or could not watch. They knew I was mature for my age, but on reflection parts of Poltergeist are a bit much, especially this part!

It also created a fear of having cuddly toys and anything with a face in my room at night which lasted for a couple of years. I even remember fast forwarding through the scene on repeat viewings due to how tense it made me feel.

With this list being based on what scared ME the most then the number one position was an easy choice.

This story was broadcast toward the end of Doctor Who’s original run. Viewing figures were falling, budgets were tiny and production values were poor. But the cheap look of the episodes from that era only increased the creepy vibe the show had at the time.

The Doctor and Ace decide to investigate a mysterious ‘Psychic Circus’ and right at the beginning you get a warning of what’s in store when Ace remarks that she hates clowns and is afraid of them. That comment is used as a foundation to build on and they deliver an endless array of disturbing clown imagery along with a circus plucked directly from your darkest nightmares.

The chief clown acts as an enforcer, hunting down anyone who tries to leave the circus with the help of his equally spooky robotic clown army. He also drives a Hearse. It scarred me for life!! 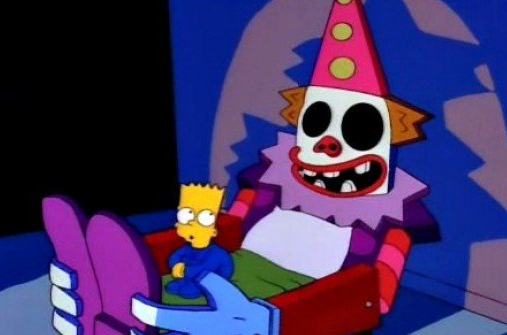 That’s enough clown talk for one day. I’m off to assume the fetal position in my bed and think happy thoughts …