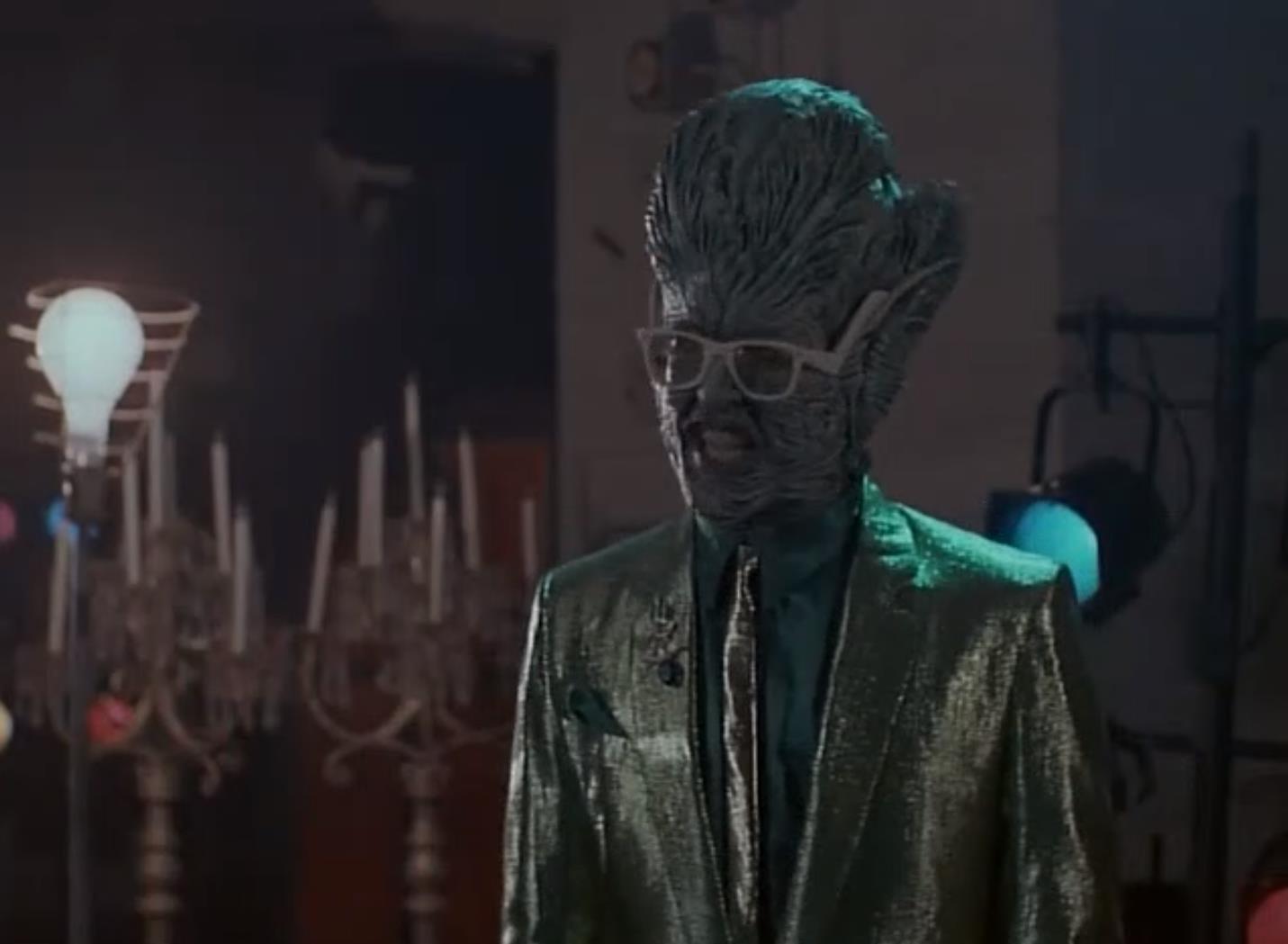 You may have heard that Steven Spielberg’s Amazing Stories is coming back with its first new episodes since the Reagan administration. The ’80s anthology series will return on March 6, 2020 on the Apple TV+ platform. Hopes are high, as you might expect. Before the show resurfaces, though, it might be worthwhile to examine how the series originally met its untimely death.

Texas filmmaker Tobe Hooper’s career was in a weird place in 1987. The decade had not been going terribly well for him, though he’d kept working all through it. Years earlier, his out-of-nowhere slasher classic The Texas Chain Saw Massacre (1974) had shocked audiences and marked Hooper as an innovative up-and-comer, a bold new voice in horror. He followed up that unforgettable breakthrough with a couple of gory, gimmicky exploitation films, Eaten Alive (1976) and The Funhouse (1981), plus a made-for-TV adaptation of Stephen King’s Salem’s Lot (1979).

What should have been Hooper’s commercial validation, the mainstream 1982 hit Poltergeist, turned into one of his biggest career setbacks. The film was plagued by rumors that producer Steven Spielberg had to take over directing duties, since Hooper was unprepared to handle a production of this magnitude. Considering the tonal and thematic similarities between Poltergeist and Spielberg’s other features of the time, namely Close Encounters of the Third Kind (1977) and E.T. (1982), it was only natural that the public would think of Poltergeist as a Steven Spielberg movie and not a Tobe Hooper movie.

Hooper’s case was not helped by the fact that he then signed an ill-considered deal with Cannon Films, resulting in three would-be blockbusters that misfired either critically, commercially, or both: Lifeforce (1985), Invaders from Mars (1986), and The Texas Chainsaw Massacre 2 (1986). Lifeforce, in particular, bombed hard. Its budget had been more than twice that of Poltergeist, but it didn’t even bring in one-tenth of Poltergeist‘s grosses. The other two films needed to be box office juggernauts to make up for it. They weren’t.

Those heavily-hyped Cannon movies were arguably Tobe Hooper’s last attempts at mainstream success. For the remainder of his career, he returned to the world of low-budget horror flicks, plus occasional TV work. He seemed to settle into a reputation as a competent journeyman director.

Meanwhile, the 1980s had been going great for Tobe’s old boss, Steven Spielberg. Steve was easily the best-known and best-loved filmmaker in America back then. When he wasn’t directing hits for himself, like Indiana Jones and the Temple of Doom (1984), he was producing hits for Robert Zemeckis (Back to the Future), Joe Dante (Gremlins), and Richard Donner (The Goonies).

In those days, Spielberg was practically a brand name, like Walt Disney. So popular and powerful was he that he convinced NBC to buy two years of his ambitious anthology series, Amazing Stories. A tribute to the sci-fi and fantasy magazines Spielberg had loved as a child, the series would tell incredible new tales each week, showcasing the work of various writers and directors. And it would have a terrifically catchy theme song by John Williams to boot! The anthology format was undergoing a mini-renaissance at the time, with The Twilight Zone and Alfred Hitchcock Presents also being revived in the mid-1980s.

But it all went kerblooey. NBC gave Amazing Stories a prime spot on its fall 1985 lineup: Sunday nights at 8:00, opposite MacGyver and Murder, She Wrote. For whatever reason, possibly the corny and old-fashioned nature of many episodes, Amazing Stories did not thrive and failed to make the Top 25. NBC was stuck with the show for two seasons, though. In its sophomore year, Amazing Stories was switched to Mondays at 8:30, following ALF. Ratings did not improve. By the end of that obligatory second season, the show had been consigned to a Friday night death slot.

That’s where Tobe Hooper enters the picture. He directed the final new episode of the series, an eccentric adaptation of Richard Matheson’s 1955 short story “Miss Stardust.” The show aired on April 10, 1987, getting edged out in the ratings by a rerun of Webster and tying with a new episode of the little-remembered sitcom The Popcorn Kid.

Hooper’s first directorial effort since the disastrous Cannon trilogy, “Miss Stardust” is quite the oddity. The story revolves around a downtrodden man named Joe, a sleazy publicity agent who agrees to promote the Miss Stardust beauty contest, only to be pestered by an irate, cabbage-like alien who insists that other lifeforms besides humans be represented. Like the classic Twilight Zone episode “Eye of the Beholder,” “Miss Stardust” could be considered a commentary on beauty standards. What is attractive to one person (or species) may be hideous to another.

At the very least, Hooper had an intriguing cast to tell this strange story. Inhabiting the lead role — and giving the episode a significant boost — was zany comic actor Dick Shawn, who had previously lent his manic energy to The Producers (1967) and It’s a Mad, Mad, Mad, Mad World (1963). Other roles were played by SNL‘s Laraine Newman, comedian Rick Overton, B-movie starlet Angel Tompkins, and Texas Chainsaw Massacre veteran Jim Siedow. Most interesting, the role of the cabbage-headed alien was played by comedy music legend “Weird Al” Yankovic.

And yet, “Miss Stardust” is a near-total misfire, the kind of headache-inducing mess that ultimately killed Amazing Stories. Part of the blame, sadly, goes to the source material. Considering the story’s pedigree, this is surprising. After all, Richard Matheson must be considered among the top tier of horror, sci-fi, and fantasy writers. His work inspired some great episodes of The Twilight Zone, plus nerve-jangling films like The Incredible Shrinking Man (1957), Duel (1971), and The Legend of Hell House (1973). It’s well worth reading the man’s novels and short story anthologies.

But “Miss Stardust,” which first appeared in the March 1955 issue of Startling Stories, is definitely among Matheson’s more minor, forgettable works. The two main characters, the PR agent and the disgruntled alien, both act and talk like wacky sketch comedy characters, and Matheson doesn’t even bring his story to a satisfying conclusion. The story ends with the implication that the agent and the alien are still squabbling over petty details, with no end in sight. The whole thing feels very much of its era, and the attempts at humor have not aged terribly well. Matheson has enough plot here for maybe a single comic strip or one of those one-panel gag cartoons in The New Yorker, but not quite enough to sustain an 11-page article.

For Amazing Stories, “Miss Stardust” was adapted by Matheson’s son, Richard C. Matheson, who largely stays true to the old man’s shaky source material. Since the original story lacks an ending, Matheson the Younger adds the character of Joe’s perky assistant, Miss Schroedinger (Laraine Newman), and concocts a late-in-the-game romance between her and the alien. And since the 1955 story is presented as a letter Joe is supposedly writing to a pal, Amazing Stories adds a wraparound story with Joe telling his troubles to a dimwitted bartender (Rick Overton). Trouble is, neither Miss Schroedinger nor the bartender really adds that much to the story, comedy-wise or otherwise, though at least the neon-lit bar has a vaguely noir-ish atmosphere. Siedow and Tompkins are likewise given little of consequence to do.

Perhaps the episode’s biggest liability, unfortunately, is “Weird Al” Yankovic himself. (It pains me to say that as a lifelong fan.) Apart from making a cameo on a 1983 episode of Laverne & Shirley and starring in his own innovative music videos, Yankovic had never really acted before this. It shows. Even if he weren’t playing a talking vegetable, he’d still appear mighty green here. One wonders what kind of direction he was getting from Tobe Hooper. Yankovic makes herky-jerky motions and talks in a high-pitched nasal lisp. Imagine a cross between Urkel and Daffy Duck. All of this is made worse by the fact that the alien’s actions are underscored with cartoon sound effects. Whenever the creature is on-camera, you’ll wish he weren’t.

To be fair, this is an impossible part to play. In the short story, Matheson describes the alien as resembling a head of cabbage on a vacuum cleaner and compares the character’s voice to that of a talking train in a Bromo Seltzer ad.

Much of the alien’s stilted, awkward dialogue (“Beside the actual point!”) comes directly from Matheson’s story, word for word. In both the story and the episode, the alien is largely relegated to the sidelines, forever grousing and complaining, but not actually accomplishing much. You start to wonder if maybe this guy should have better things to do with his time than interfere in a penny-ante beauty contest.

In both the 1955 and 1987 versions of the story, the PR man and the cabbage-headed alien reach a compromise. A small number of alien representatives, they agree, will compete in the contest alongside the human women. Again, though, Matheson’s original text proves unfilmable. He describes Miss Mars as looking like “two Spanish olives” with “toothpicks stuck in them.” Miss Mercury is a “Technicolor rock,” while Miss Jupiter is a “dirty iceberg.”

What do you do with that? Hooper’s solution — or maybe the NBC accounting department’s solution — is to have the alien contestants “portrayed” by ugly, largely immobile puppets. These things might have been fine as background characters at the Mos Eisley cantina in Star Wars (1977) or as decorations at a regional theme park, but they can’t hold a scene on their own. So the climactic contest proves to be interminable. I’m not normally an advocate of CGI, but some animated monsters could have helped tremendously here.

All in all, “Miss Stardust” serves as a poor sendoff for Amazing Stories, since it is neither amazing nor much of a story. It’s the kind of silly, boring trifle that scared away audiences 33 years ago and could still do so today. The creators of the new Amazing Stories should be forced to watch it at least a dozen times, taking notes all the while.